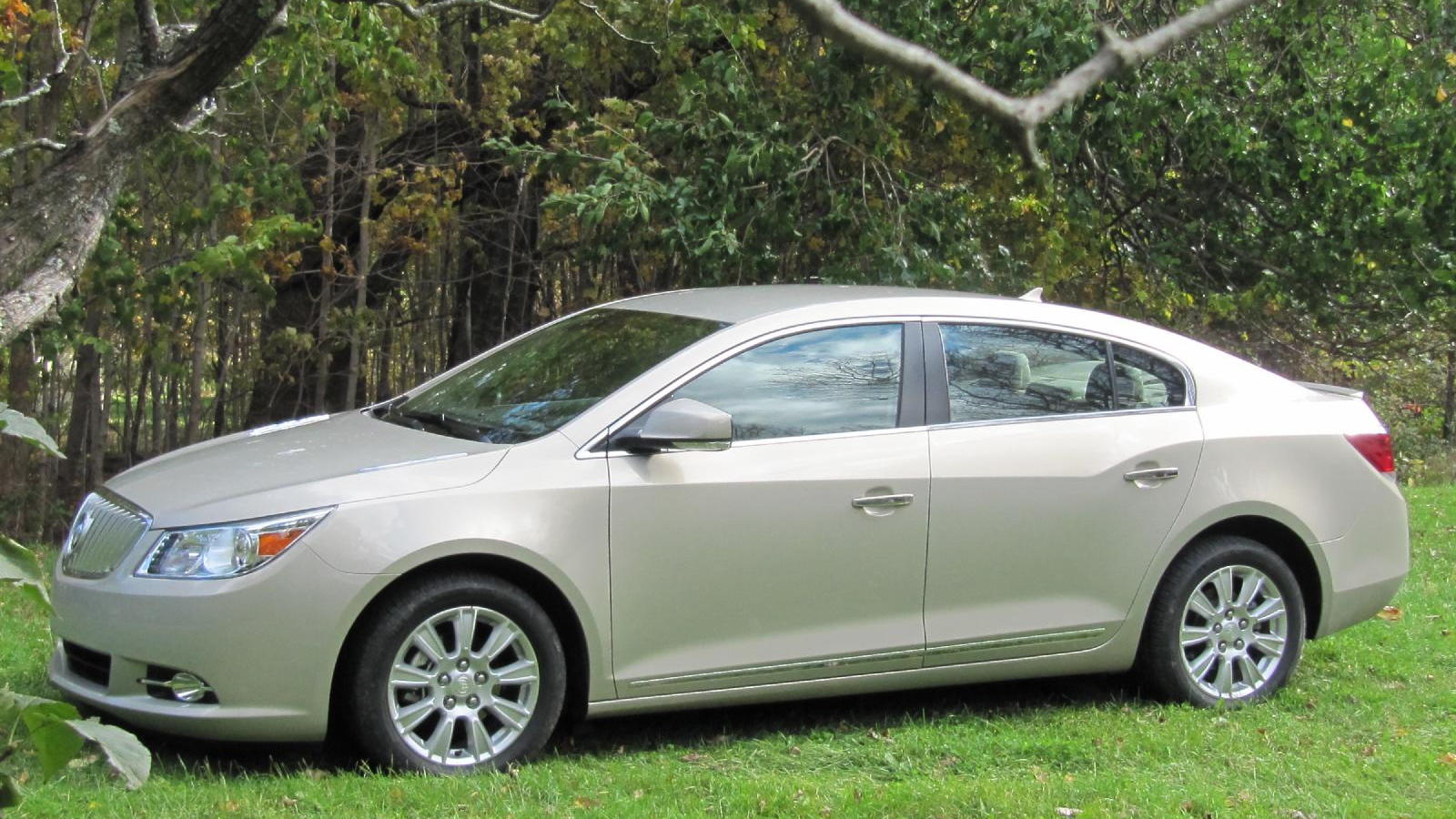 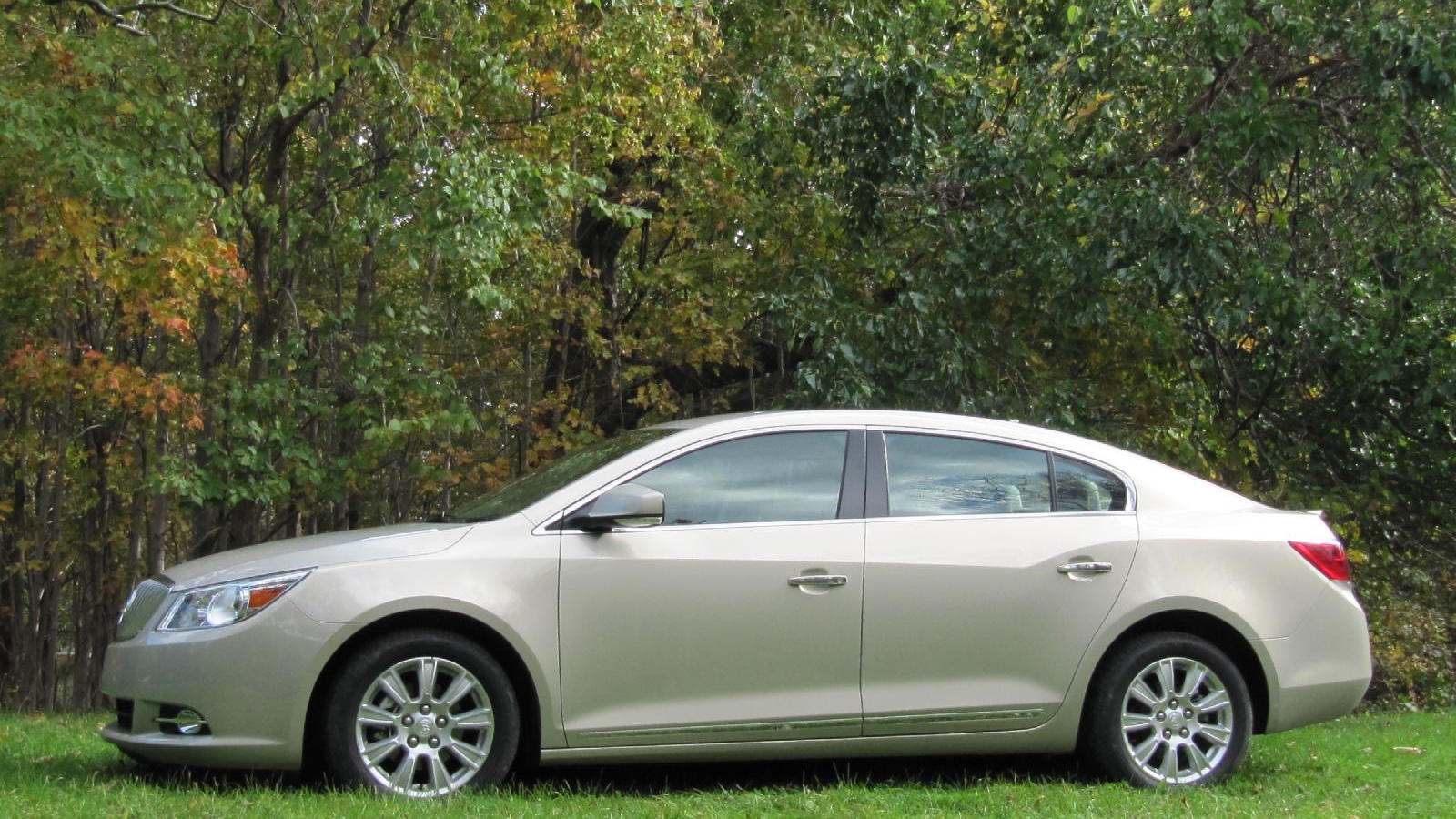 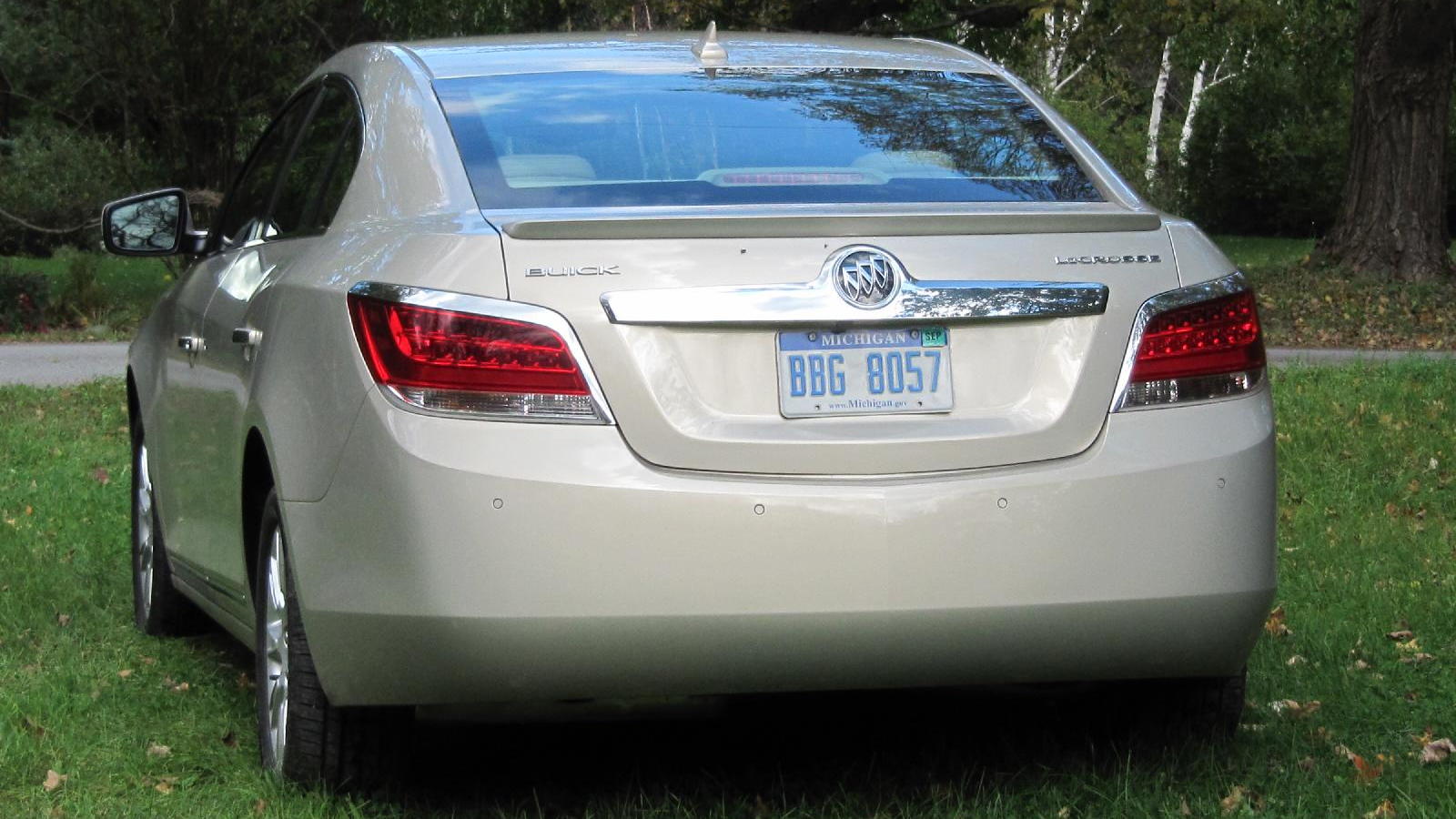 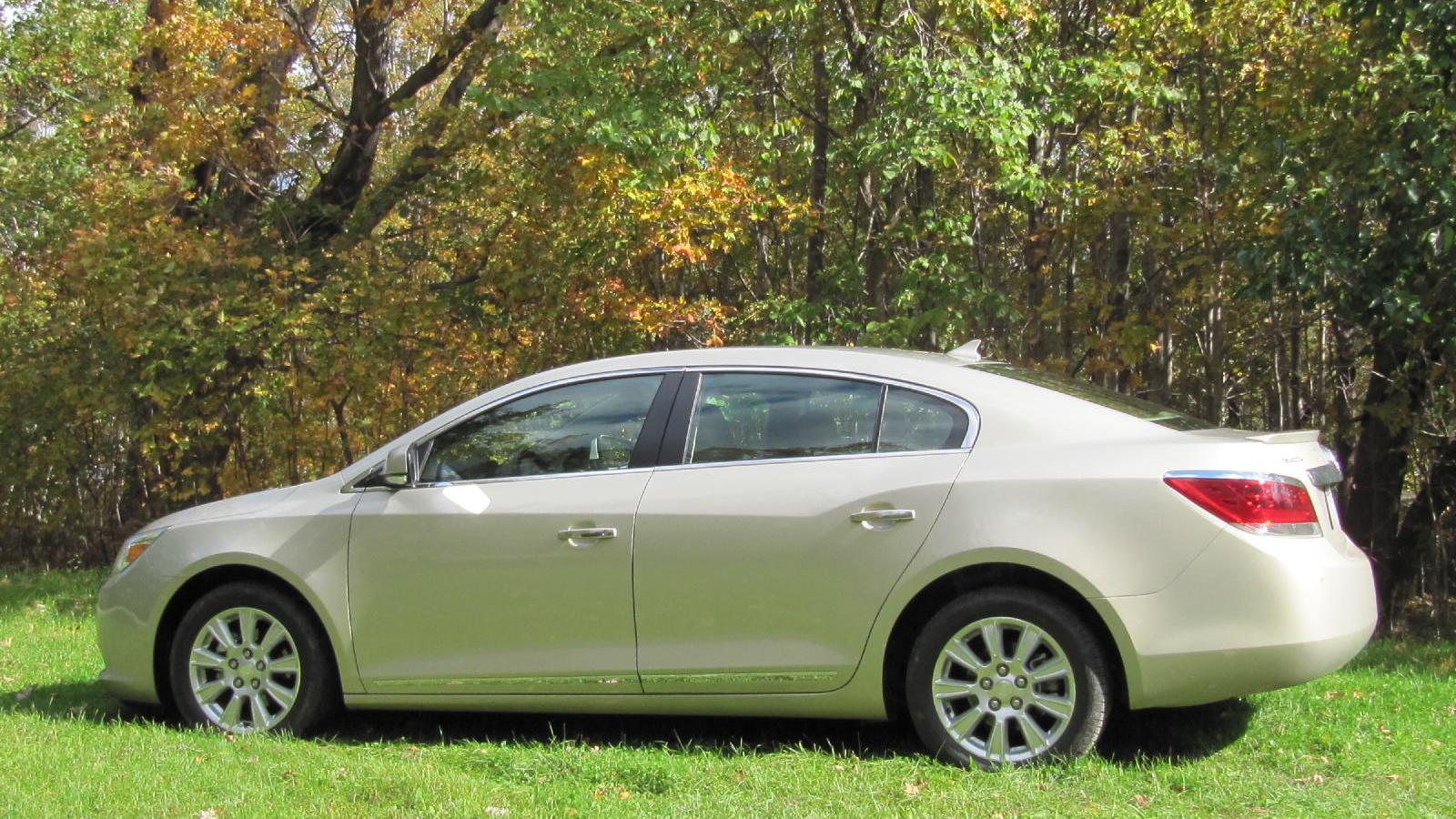 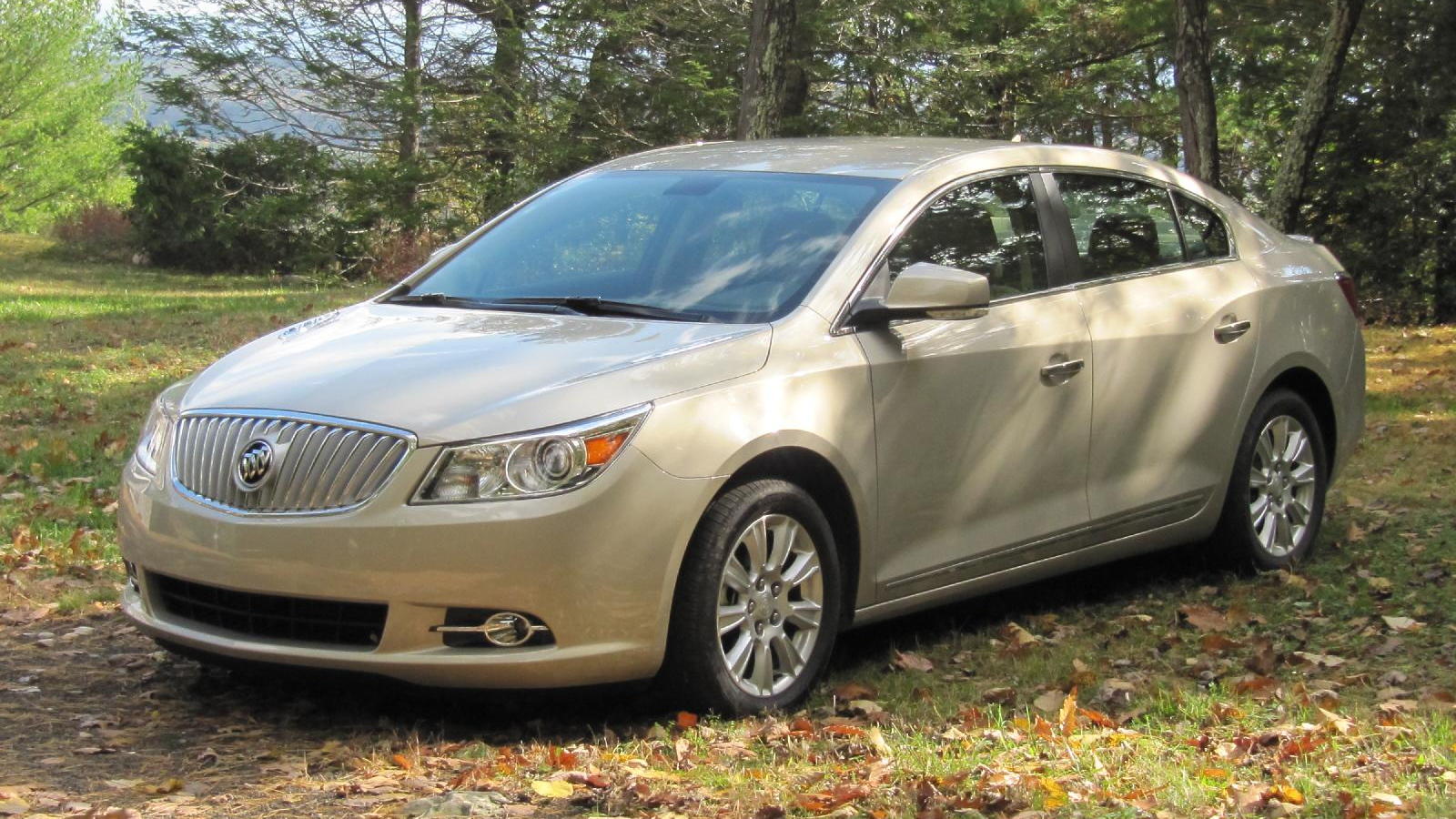 We drove the prototype, and liked it. Now we've driven the real thing. We still like it.

In this case, "it" is the 2012 Buick Lacrosse with eAssist, the only four-cylinder model that Buick offers in its Lacrosse large luxury sedan.

While large Buicks aren't known for their gas mileage, this one is rated by the EPA at 29 mpg combined--no, that's not the highway number--which is higher than most of its non-hybrid competition.

Over a weekend road test of 270 miles, we got an overall gas mileage of 30.2 mpg--on our usual route, which is about two-thirds highway and one-third around-town and suburban driving.

All fours are hybrid

For 2012, all four-cylinder Lacrosse models come standard with eAssist, the name Buick has applied to the second generation of GM's belt-alternator-starter mild-hybrid system.

The new version of the system powers the electric motor-generator from a small lithium-ion battery pack, mounted at the base of the trunk toward the rear seat.

For better gas mileage, the eAssist version of the Lacrosse also comes with active grille shutters to lower its aerodynamic drag at speed.

In practice, this means that the engine in the Lacrosse with eAssist switches off when the car is stopped, then restarts as soon as the driver's foot starts to lift off the brake pedal.

That's the only benefit Buick chose to show in its introductory ad for the Lacrosse with eAssist, but there's another benefit to the system's more powerful 15-kilowatt (20-hp) electric motor as well.

The motor not only starts the engine, but also contributes added electric torque to the engine when a little more power is needed. In practice, this means the car's six-speed automatic transmission needs to upshift less.

That allows the 182-horsepower, 2.4-liter engine to continue running at lower, more economical speeds--not to mention making the Lacrosse slightly smoother and quieter in use.

The net result is much better fuel economy. The EPA rates the four-cylinder 2012 Lacrosse at 25 mpg city, 36 mpg highway, for a combined gas mileage figure of 29 mpg.

That's remarkable for such a large near-luxury sedan, and it's far better than the 19 city, 30 highway, and 23 combined of the 2011 model using the same engine, but without the eAssist system.

Though hybrid near-luxury sedans are hardly their own category, likely competition for the 2012 Lacrosse hybrid includes the slow-selling Lexus HS 250h (35 mpg combined) and the Lincoln MKZ Hybrid (39 mpg combined).

So as not to scare those buyers, Buick refers to the Lacrosse eAssist system as "light electrification," and it tends to avoid the dreaded H-word in its marketing for the car. Wouldn't want anyone to think it was a Prius, now, would we?

To be honest, the 2012 Buick Lacrosse--with or without eAssist--is not a vehicle we particularly relish driving. It's a surprisingly large sedan, weighing almost 2 tons and stretching 16 and a half feet long.

And the proportions of the cabin from behind the wheel felt a little oversized for our six-foot driver, with the armrests on the door and console just a bit too far apart. In other words, this seems to be a car for large Americans.

Sitting low down inside

The window openings are short, the beltline rises toward the rear, and occupants sit low in the car, meaning outward visibility isn't great. Five-foot tall rear-seat occupants may not even be able to see out their windows.

From the inside out, in fact, the base of the windshield pillars creates a blind spot that's so large we almost missed an approaching bicyclist. The thick pillars are second only to those of the Chevy Volt in blocking outward vision, and we'd like to have a stiff word with GM's safety engineers about them.

That said, the 2012 Lacrosse is a comfortable and very quiet place to travel, especially if you're in the habit of racking up highway miles.

While the eAssist system is almost imperceptible, the drivetrain occasionally stumbles on quick transitions among acceleration, regenerative braking, and the standard friction brakes.

The alternator-starter both drives and is driven by the engine crankshaft, through a special and complex pulley-tensioning system, and once in a while the driver can feel it working.

It was especially noticeable under light engine loads and when the car was moving downhill. But we don't think the occasional stumbling will be a huge impediment to enjoying the car, especially since it may stand out simply because the Lacrosse is so quiet.

The transitions are far less noticeable than in the Hyundai Sonata Hybrid and 2011 Kia Optima Hybrid we've driven, however--showing that the more generations of a hybrid system the automaker has built, the better the blending gets.

While our three-day drive was mostly comfortable (and did we mention quiet?), the 2012 Buick Lacrosse has some notable flaws.

Our first impression after getting behind the wheel was that the dashboard is a confusing mess of small black buttons, switches, and knobs. We counted 43 of them, some with multiple functions depending on which way they were rocked.

We happened to drive the subcompact 2012 Chevy Sonic just a week apart from the Lacrosse, and found its controls--with rotary knobs, bright colors, and a far more intuitive layout--far, far better than those of the Lacrosse. A Buick Regal we drove earlier this year had the same issue as the Lacrosse.

The one exception to the prevailing hush, both at idle and on the road, was a remarkably noisy electric rear parking brake. Engaging and disengaging it produced a noticeable and not-all-that-pleasant electric whine from somewhere to the rear of the car.

Finally, the lack of convenient interior storage was nothing short of shocking. The driver had access to a pair of cupholders, one pull-out door bin, and a cubby in the console.

That's it. No tray for mobile devices, no overhead compartment for sunglasses, nothing large and flat enough to hold an old-style road map.

Does Buick think its drivers don't own mobile devices, perhaps?

The eAssist system is not offered with the optional all-wheel drive system in the 2012 Lacrosse, which is only available with the far thirstier 3.6-liter V-6 engine (16 mpg city, 26 mpg highway, 20 mpg combined).

As tested, our car with the Premium I group was base-priced at $32,440 and had a bottom line of $36,685 including delivery. That included $600 for the Entertainment Package, including the AM-FM-XM stereo with CD player, an 11-speaker Harman/Kardon system, and a 120-Volt power outlet.

On top of that, the Driver Confidence Package added $1,440 for adaptive high-intensity discharge headlamps (which were excellent), a blind-zone alert system, and the heads-up display (also very good). Finally, the Navigation system with backup camera added another $1,345.