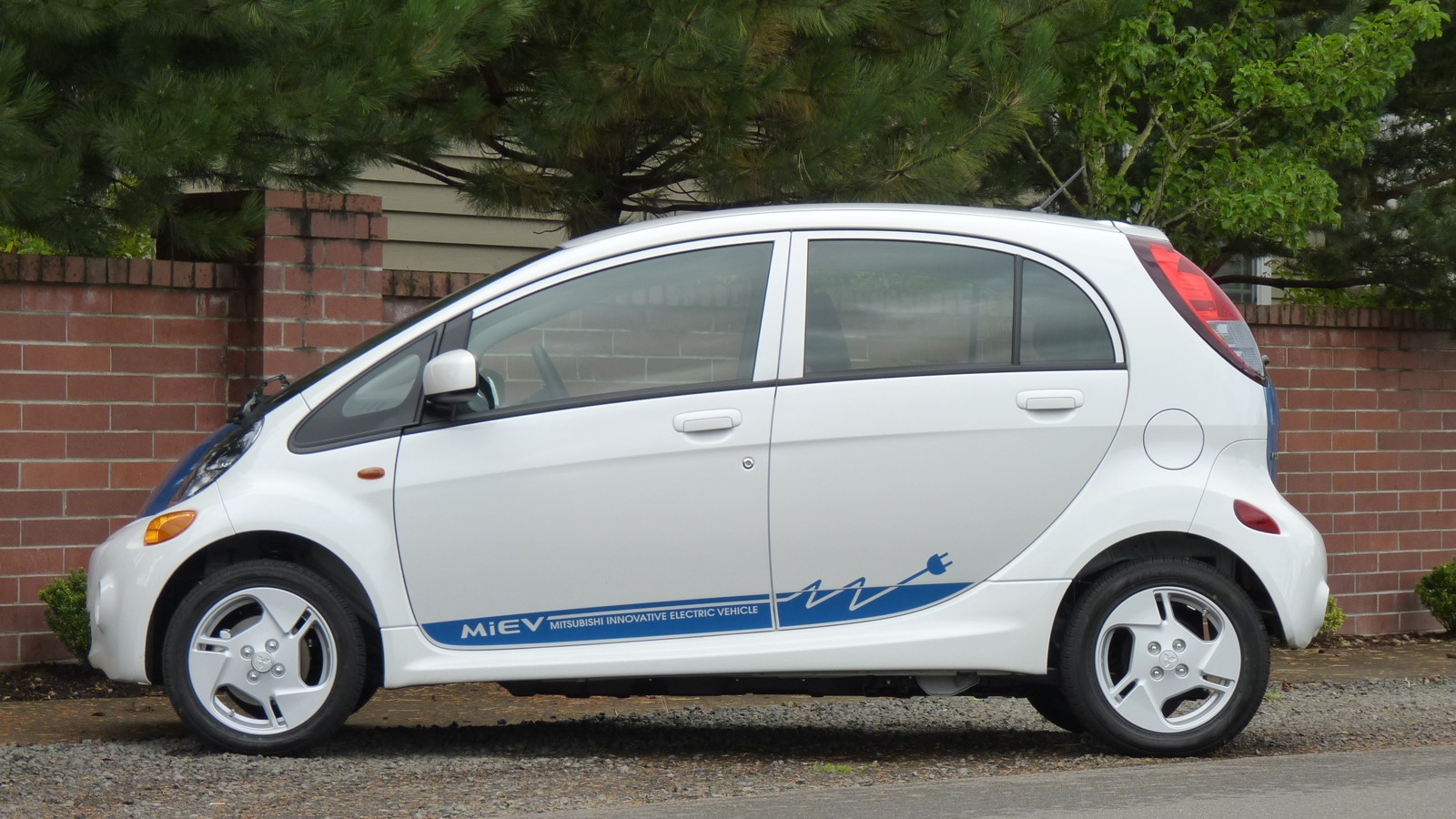 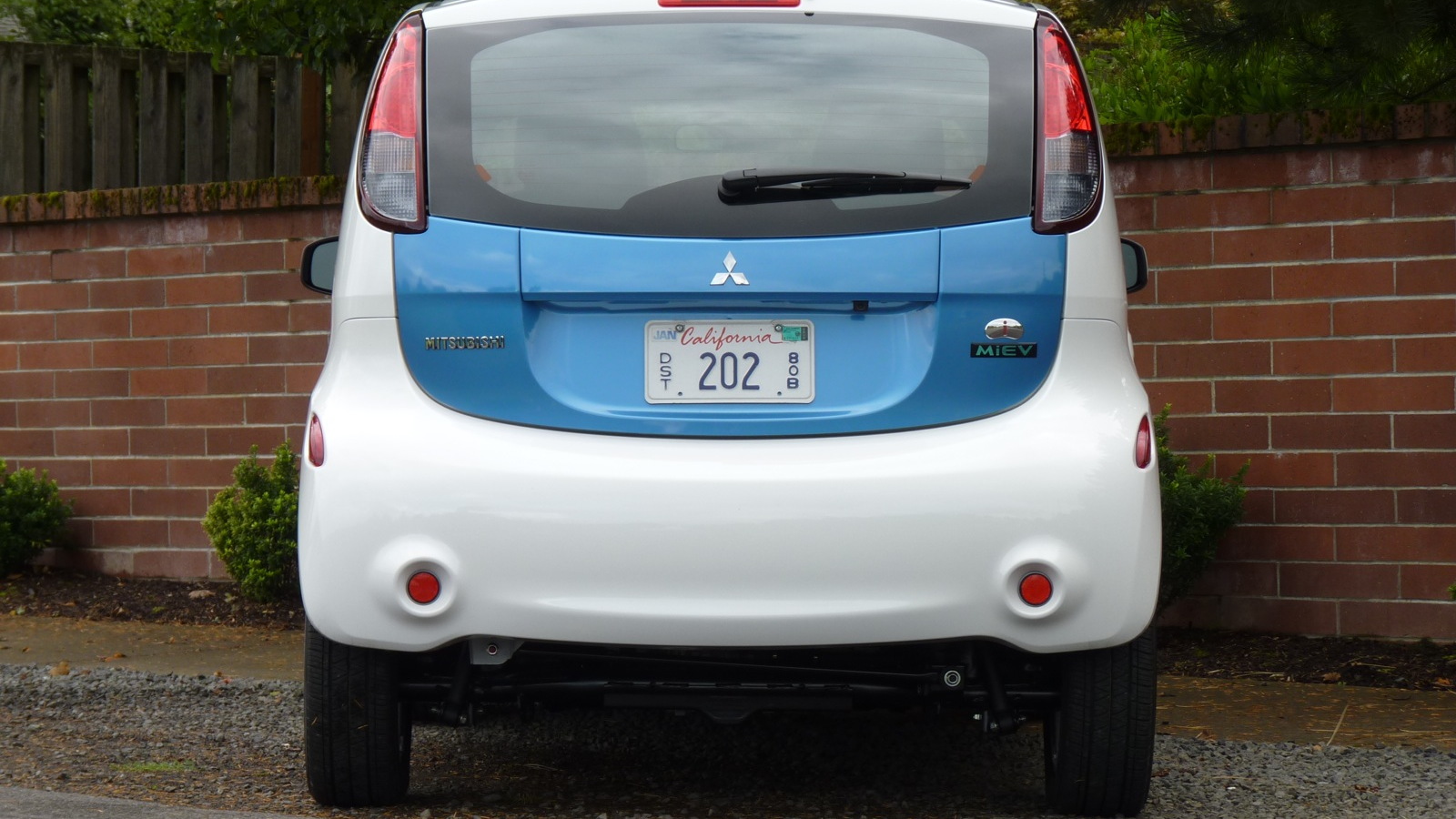 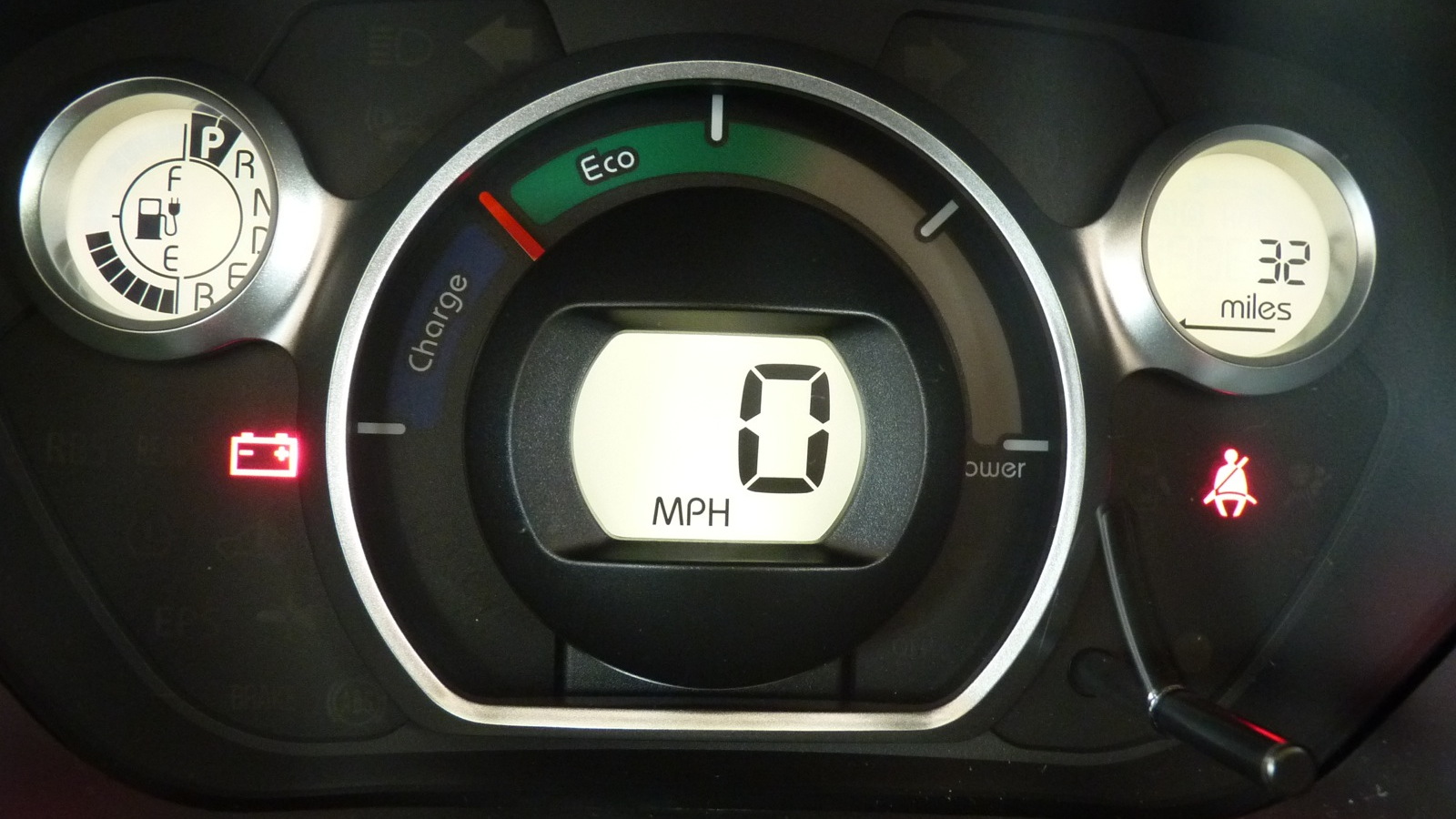 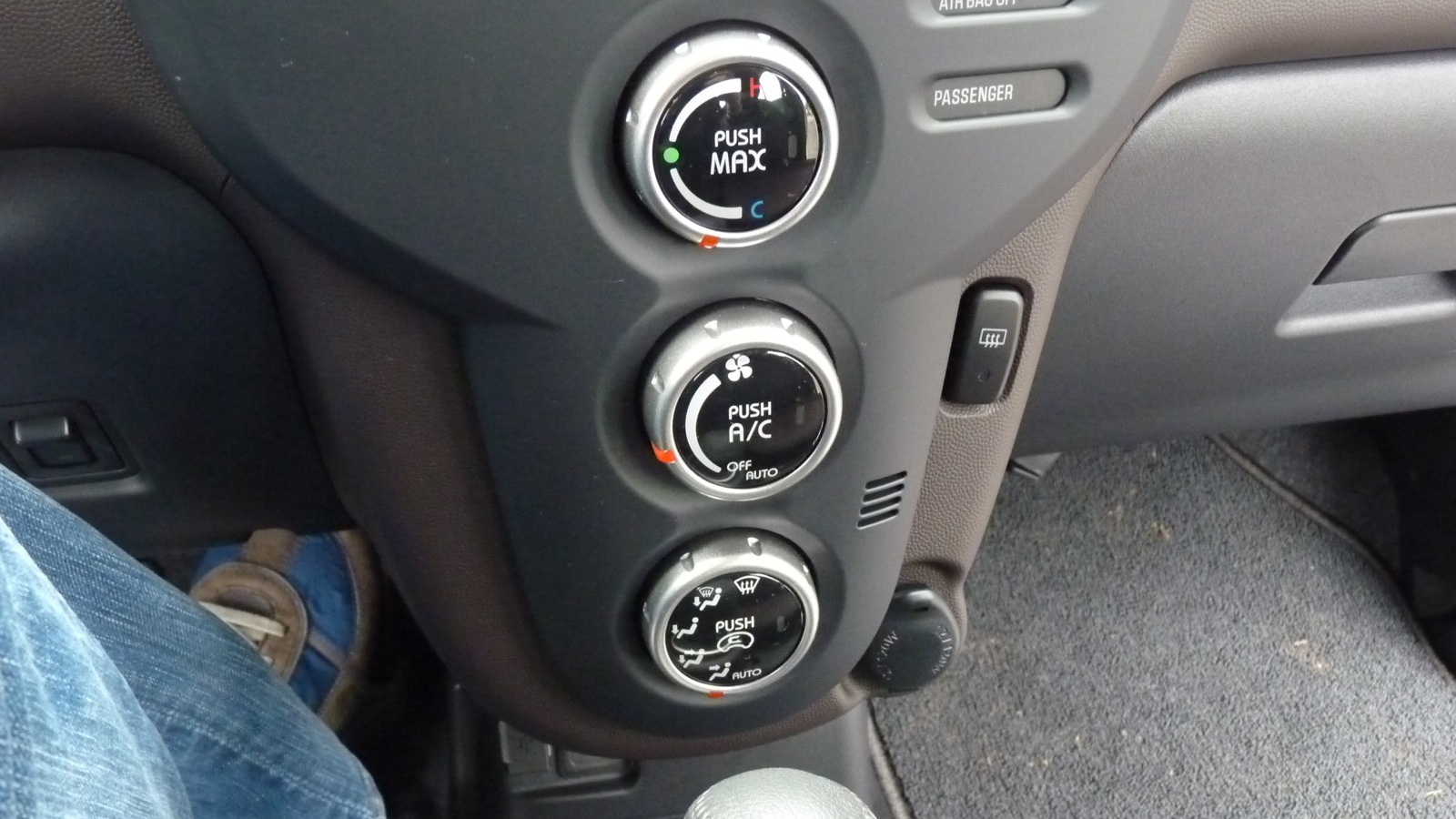 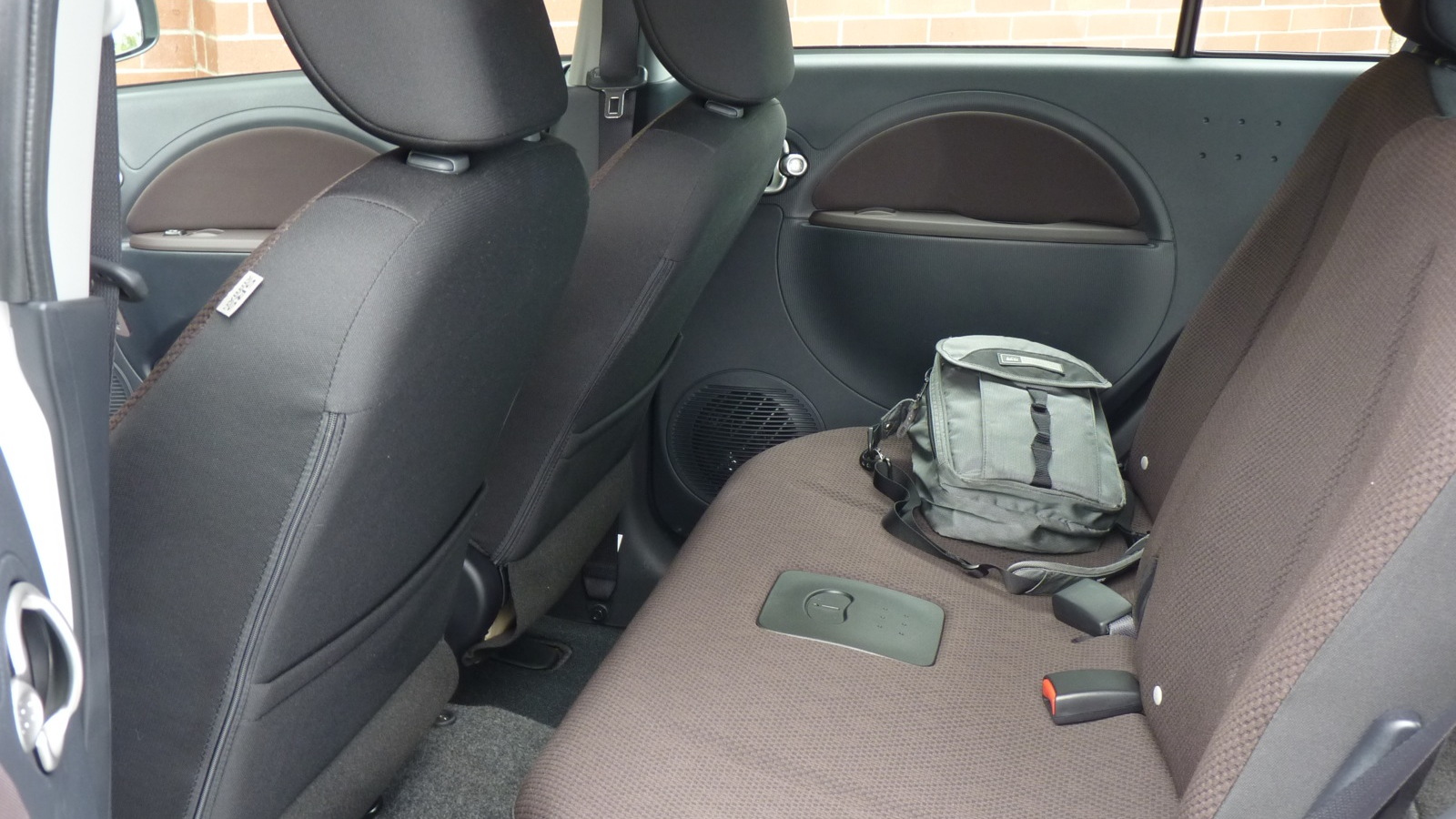 The Mitsubishi MiEV went on sale in Japan and Europe back in mid-2009, and it’s sold 11,000 of them in those markets combined, since then; and including those rebadged as Peugeot and Citroen models, it adds up to about 15,000 in all. And that’s about, as of last month, the same number of Nissan Leafs sold worldwide.

Among pure electric cars, Mitsubishi’s lead might have slipped away, but it does have one very significant claim: The 2012 Mitsubishi i (what it’s called here) is the most efficient DOT-legal vehicle for sale in the U.S. market, with an official MPGe (miles per gallon equivalent) rating of 112.

That’s right; the MiEV is finally officially U.S.-legal, with first deliveries slated for late November. And in Portland, Oregon, we recently got the chance to drive a couple of the first pre-production U.S.-spec cars to be shipped over.

First off, our version does end up looking a bit different. The U.S.-spec i is altogether about eight inches wider, for two reasons—to accommodate side-curtain airbags for front and rear occupants, and in order to increase track significantly, for better highway stability as U.S. cruising speeds, even for those used mainly in urban situations, are higher than those in Europe or Japan.

The U.S. cars also get more prominent, bulging bumpers front and rear, with a fascia around them, adding nearly a foot of length. Another concession to DOT approval is the odd dual-wiper setup, with one of the wipers especially long and bent at an odd angle—partially obscuring a corner of the windshield even when they’re off—which replaces the otherwise elegant single-wiper setup that other markets get.

Underneath, the MiEV has the same chassis layout as elsewhere in the world—and the same layout as the Mitsubishi i on which it’s based: MacPherson struts and a 21-mm stabilizer bar in front, with a three-link DeDion rear configuration. From the outside, it’s a bit novel to see a minicar with staggered tire sizes (145/65R15 in front, 175/60R15 in back).

While the MiEV wasn’t designed, ground-up, as an electric vehicle like the Leaf, you might suspect that it had been; that’s because the rear-engine, rear-wheel-drive layout of the gasoline-powered Mitsubishi i minicar proved to be especially friendly for packaging a battery pack and electric-drive components. The surprisingly small 16 kWh (330V) lithium-ion battery is placed low, beneath the floor of the vehicle, with the engine at the rear.

While the i’s roofline is somewhat rounded toward the front, it’s slab-sided and about as boxy as can be toward the back—and that’s a good thing for fitting people and stuff. MiEV is shockingly spacious inside, with more than 50 cubic feet of cargo space when you fold the 50/50-split backseats forward. Cargo space is a lot smaller with those seats up, but the back seats are actually usable for adults. This 6’-6” reporter managed to get in easily and have enough headroom, along with enough knee room provided the occupant ahead wasn’t back all the way. The big drawback when it comes to interior space is width; the MiEV is just 62.4 inches wide—which is already about eight inches wider than the Japanese-market version; unfortunately very little of that added width—used to install side-curtain airbags, and to widen the track a few inches—carries over to the interior.

Get into the driver’s seat and first off what you’re likely to notice is that there’s no complicated interface. You simply put the key in the slot, turn it to the on position, and you’re ready to shift to Drive and go. The battery range bars remind you how much charge remains, with a simple trip computer to click through, and a sweeping analog gauge showing you the degree of discharge or regenerative braking. In addition to the usual ‘P R N D’ positions along the shift gate, there are ‘Eco,’ and ‘B’ positions.

Company officials recommend doing normal driving in Eco mode, then clicking up to ‘D’ for long uphill grades or fast merges; on long downhills ‘B’ is recommended for maximum regenerative braking.

Even in ‘D,’ lifting the throttle dials up more regen than in the Leaf, and in Eco you’ll soon find yourself using the mild braking that’s built into the accelerator calibration. The brakes themselves (ventilated discs in front, drums in back) seemed entirely up to the task the once or twice that we really pushed them—although with such a regen calibration, with careful driving, their pads might even last the lifetime of the vehicle, or close to it.

The 2012 Mitsubishi i doesn’t have the sort of mammoth torque available from a standing start like the Leaf, but once underway it can squirt ahead from say, 5 mph to 25 mph, seemingly in just a second or so—surprising surrounding drivers as they expect that sort of dash to be accompanied by a roar of high-revving engine. Just as in a number of EVs, we noticed the Mitsubishi feeling considerably more sluggish past 50 or 55 mph; it gets from 55 to 70 with relative ease, but climbing from 70 to 75 and above is much slower; on our non-eco-conscious run we saw an indicated top speed of 82 mph. On the bright side, the widened track appears to help; the MiEV feels stable and planted at those speeds, though the quick steering required attention and very small adjustments.

The U.S.-spec i is surprisingly fun to drive around town. This little minicar, despite being so tall, takes tight corners with a planted, stable feel, thanks to its very low center of mass (lower than the gasoline version)—and at a curb weight of 2,579 pounds in base form, it simply doesn’t feel portly. The steering, too, caught us by surprise as one of the better racks we’ve sampled as of late, with actual surface feedback and nice weighting—not really a surprise given the excellent steering of the Lancer-family vehicles, but nevertheless a surprise given the i’s appearance. That all said, the very soft suspension calibration means there’s lots of lean and protestation if and when you find that driver’s road.

The rather tall sidewalls and a somewhat soft suspension calibration probably go a long way toward reducing road noise; it’s very quiet inside, with very little engine whine—though at 22 mph and below you hear a light-saberish sound that’s supposed to alert pedestrians.

Power is provided by a 49-kW (66 hp) synchronous permanent magnet (neodynium) motor, which weighs just 101 pounds. It can produce up to 147 pound-feet of torque, and has its own maintenance-free water-cooling system. The fixed reduction-gear transmission with parallel shaft reduction weighs just 42 pounds, with the entire motor and transmission unit just 19 inches long and 143 pounds. During regenerative braking, the motor runs as a generator, while it’s (electrically) run in reverse rather than shifted to a reverse gear.

Mitsubishi emphasizes that the MiEV’s battery pack is not simply laptop cells linked together; rather it uses cells that were developed specifically for vehicle use. In it, 88 cells are grouped into modules—four per module—for a total of 22 modules, all in a stainless-steel enclosure that’s waterproof and dustproof, mounted below the floor substructure with crossbeams for support. An interesting point is that the MiEV’s battery actually helps increase the vehicle’s rigidity. The battery pack is fitted with an exhaust fan and duct arrangement, with vehicle A/C air sent to the battery when it’s 86 degrees F or higher. 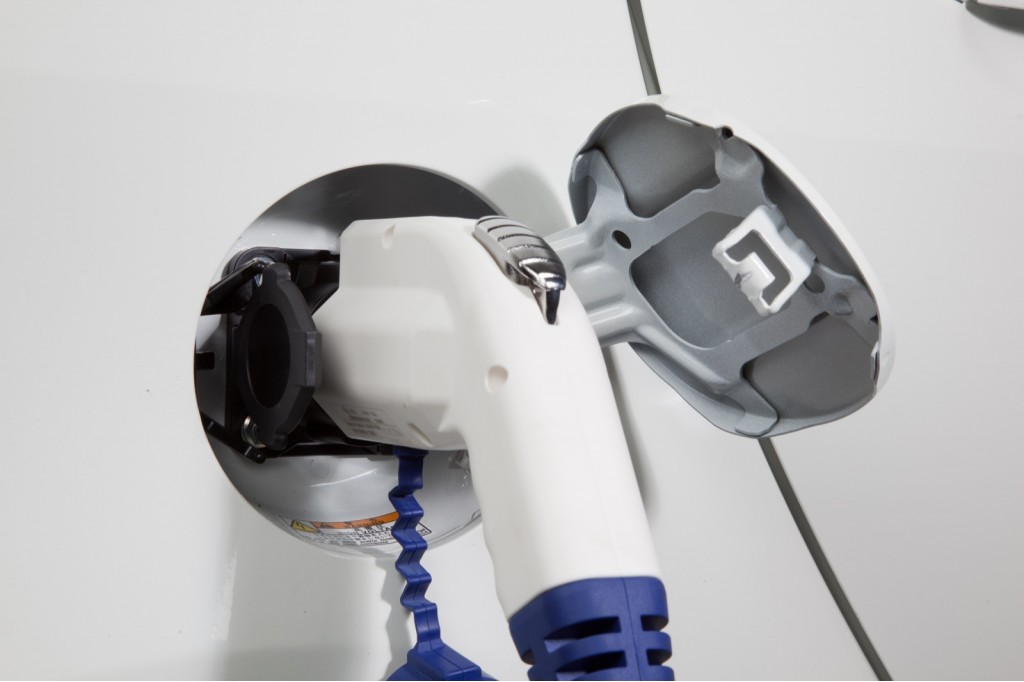 Mitsubishi says that using national-average electricity rates, the i will cost just over $2.50 per full charge from zero.

Range: not much less than Leaf

The i’s driving range is shaping up to be about ten miles shorter than the Nissan Leaf—which is all the more impressive considering its 16 kWh capacity versus the Leaf’s 24 kWh. While the official EPA range for the MiEV is 62 miles, Mitsubishi says that a real-world range of 85 to 89 miles is possible with gentle driving and light use of accessories. With very cautious driving and no accessory use, some MiEVs have seen just over 100 miles on a charge.

Electric-vehicle ranges are still an always-changing situation in which you really must know your battery and vehicle if you’re going to push available range. As a sample of what the MiEV is like:

Our second drive day, as part of a Mitsubishi drive route, we drove very carefully—though including nearly 10 miles on the expressway—and were on track for about 75 miles of driving on a charge—a figure that Mitsubishi officials seemed a bit surprised about.

Two models will be offered—a base ES and premium SE model. The latter will include a more attractive two-tone instrument panel, eight-speaker, 360-watt sound, leather steering-wheel and shift-knob trim, upgraded door trim with cloth inserts, premium seats, and matte-metallic inserts. Also available will be a remote system for climate control and charging. Both models will include a security system and a heated driver’s seat with timer.

Beginning in late November—in what Mitsubishi calls Phase 1A of their electric-vehicle plan—the MiEV is going on sale in California, Oregon, Washington, and Hawaii. Then, the company plans to have sales rolled out nationwide by the end of calendar-year 2012. Prices undercut the Leaf by a few thousand: $29,125 for ES, $31,125 for SE—or, for all practical purposes after the $7,500 tax credit, $21,625 or $23,625.

The big question that remains is, who will prefer the MiEV to the LEAF, and how many of them are out there? The Leaf stands as a vehicle design that simply fits in to the U.S. market, while the MiEV stands out as an oddity; on the other hand, that could prove an advantage for Mitsubishi, and it could find a cult following from eco-minded shoppers who simply want the most efficient EV, or the most affordable one.

Would you consider the new 2012 Mitsubishi i? Let us know what you think.