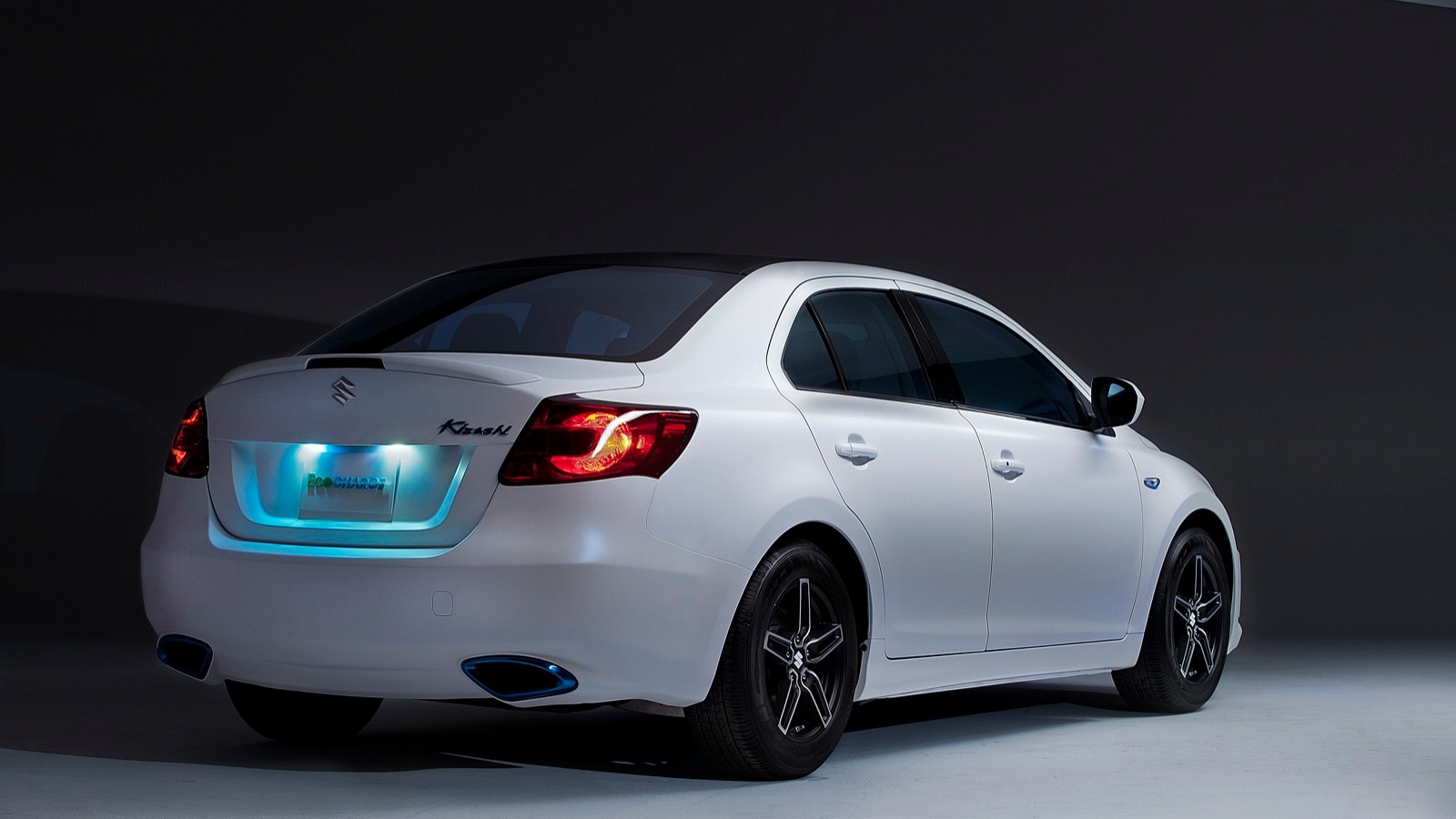 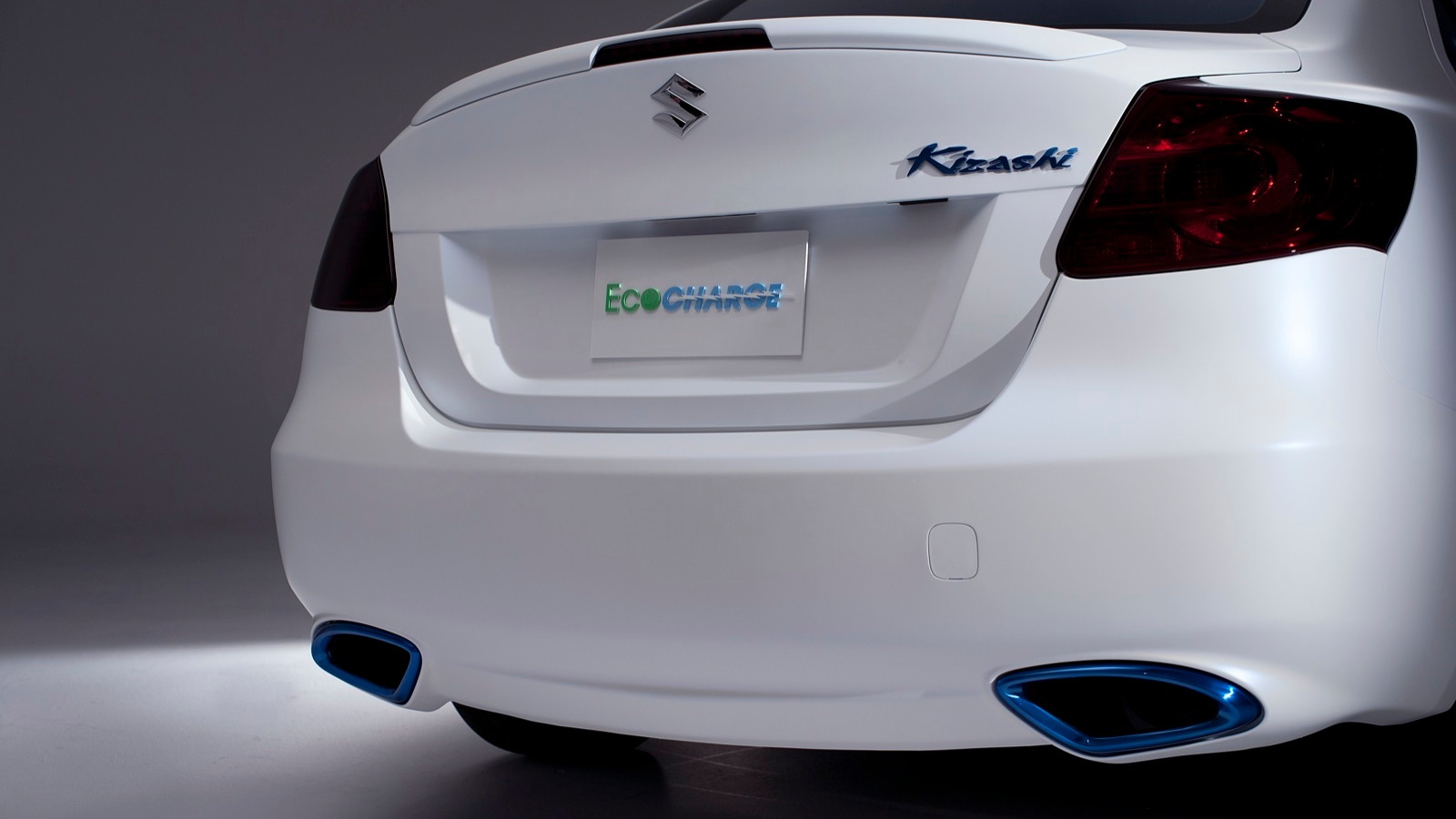 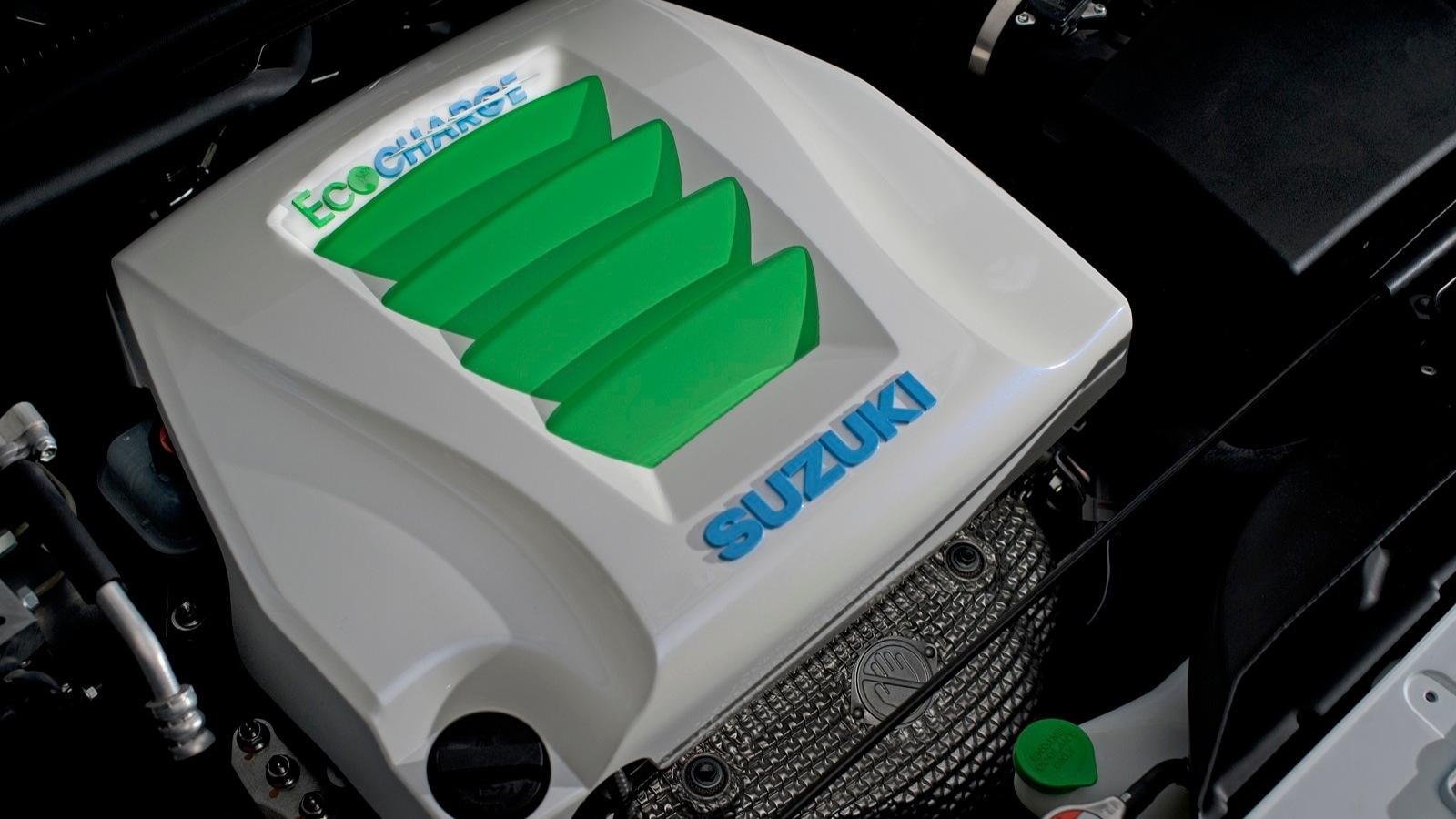 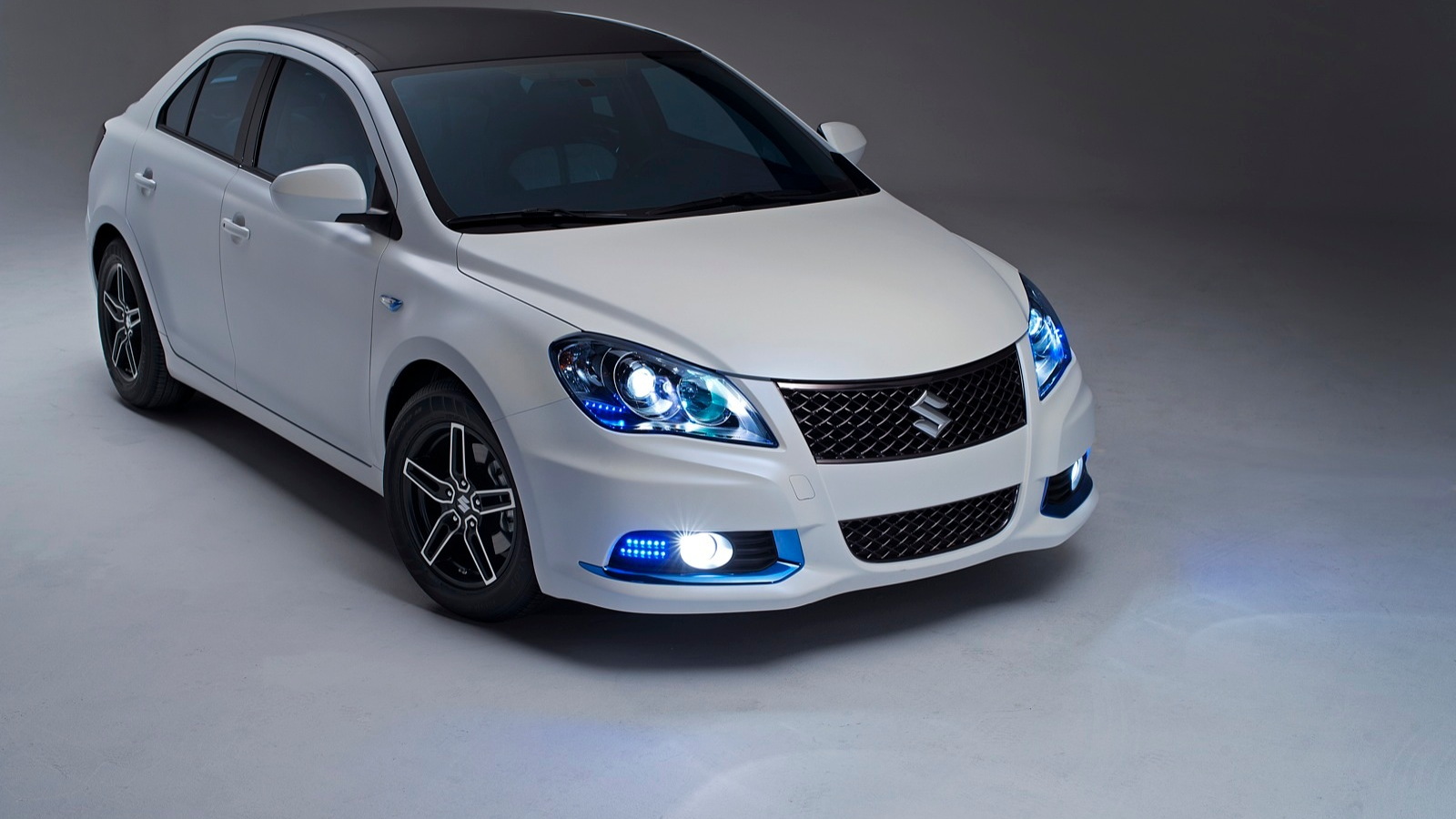 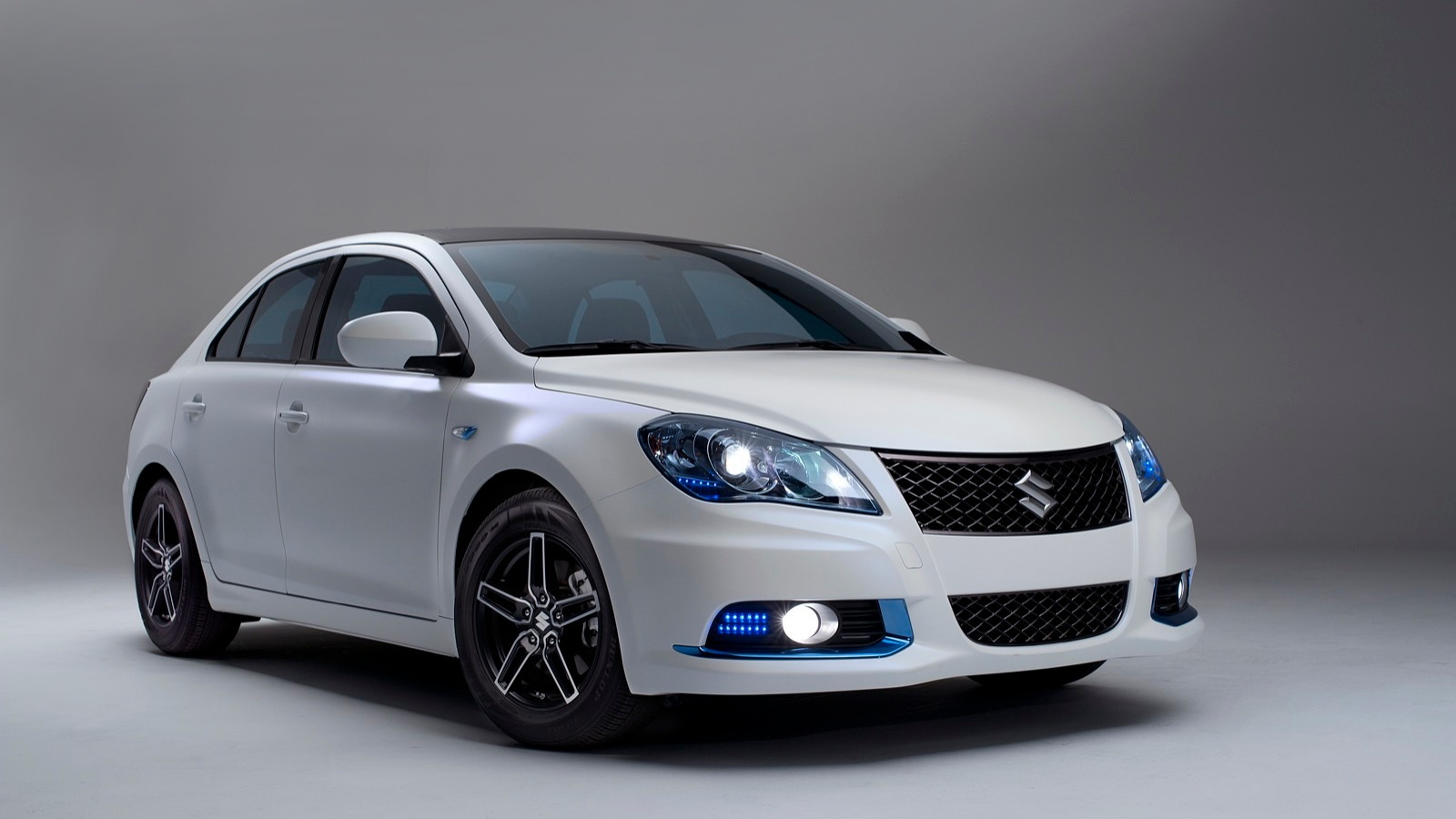 Suzuki has had a rough time of it lately, with its only new product being the well-received but still low-volume Kizashi sports sedan, halfway between a compact and a midsize car.

But for this week's 2011 New York Auto Show, they're display a couple of Kizashi concepts that point toward what the company would like to do with its sporty car.

In addition to a turbocharged version--previewed by the Kizashi Apex Concept--Suzuki introduced the Kizashi EcoCharge Concept, its first-ever hybrid-electric vehicle.

Unlike other hybrid systems using electric motors of roughly the same size, which put the motor between the engine and transmission, the Kizashi EcoCharge motor-generator is belt-driven, replacing the car's alternator and starter. The six-speed automatic transmission is mounted to the engine in the usual way.

As well as delivering additional torque, the motor-generator also recharges the car's air-cooled 0.5-kilowatt-hour lithium-ion battery pack during regenerative braking. The pack is mounted in the trunk.

Suzuki says the concept delivers 25 percent better highway fuel economy than the 2011 Kizashi, meaning it would receive an EPA highway rating of 37 or 38 mpg.

Like most concepts, exterior styling has been tweaked to emphasize the gas-saving mission of the Kizashi EcoCharge. Luminescent white satin paint sits over a blue undercoat, and special headlamps and LED fog lamps set its front end apart from that of the standard car.

The company's goal, according to Steve Younan, American Suzuki's director of automotive marketing and product planning, was a "fuel economy gain in real-world driving ... while still retaining the production Kizashi’s handling and braking advantages."

Left over from GM relationship?

Whether the Suzuki Kizashi Hybrid remains a concept or is destined for production isn't clear. "We are continuing to study the virtues" of the technology, Youmans said, which is about as noncommittal as you can get in a press statement.

In fact, the system design may be owned by another company: General Motors. The technology and specs of Suzuki's hybrid system appear to be very similar to those of the second-generation GM mild-hybrid system.

That revised design, now called "eAssist," is a completely redesigned version of the GM mild hybrid system known as Belt-Alternator-Starter, or BAS. It had a rocky launch in some 2007 through 2009 models of the Saturn Vue and Aura, and the Chevrolet Malibu.

Suzuki had been slated to receive a version of the redesigned system before GM divested itself of its holdings in various Japanese carmakers, including Suzuki. The entire project went on hiatus during GM's bankruptcy. Whether GM would now be willing to license such a useful gas-saving technology remains unknown.

[UPDATE: Suzuki confirmed to GreenCarReports that their system was, in fact, based on GM's second-generation mild hybrid system.]

The new GM mild-hybrid technology will be fitted as standard in the 2012 Buick Lacrosse with eAssist, as the system is now known. Buick projects that car to be rated at 37 mpg highway as well. The eAssist system was unveiled as an option for the 2012 Buick Regal at the Chicago Auto Show as well.

Buick dealers will take orders for those vehicles starting in May, and eAssist-equipped vehicles will start to appear in dealerships around July.