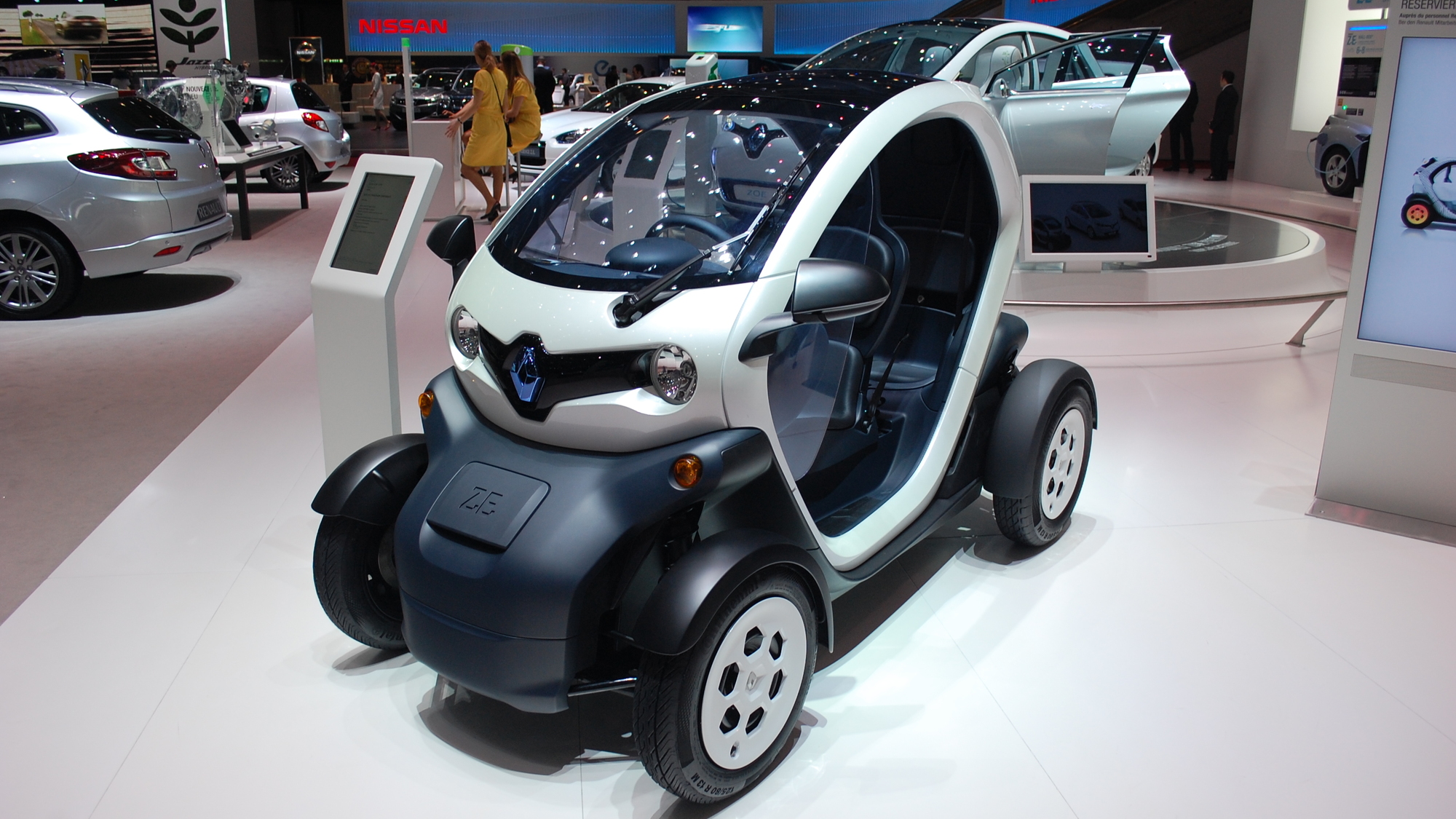 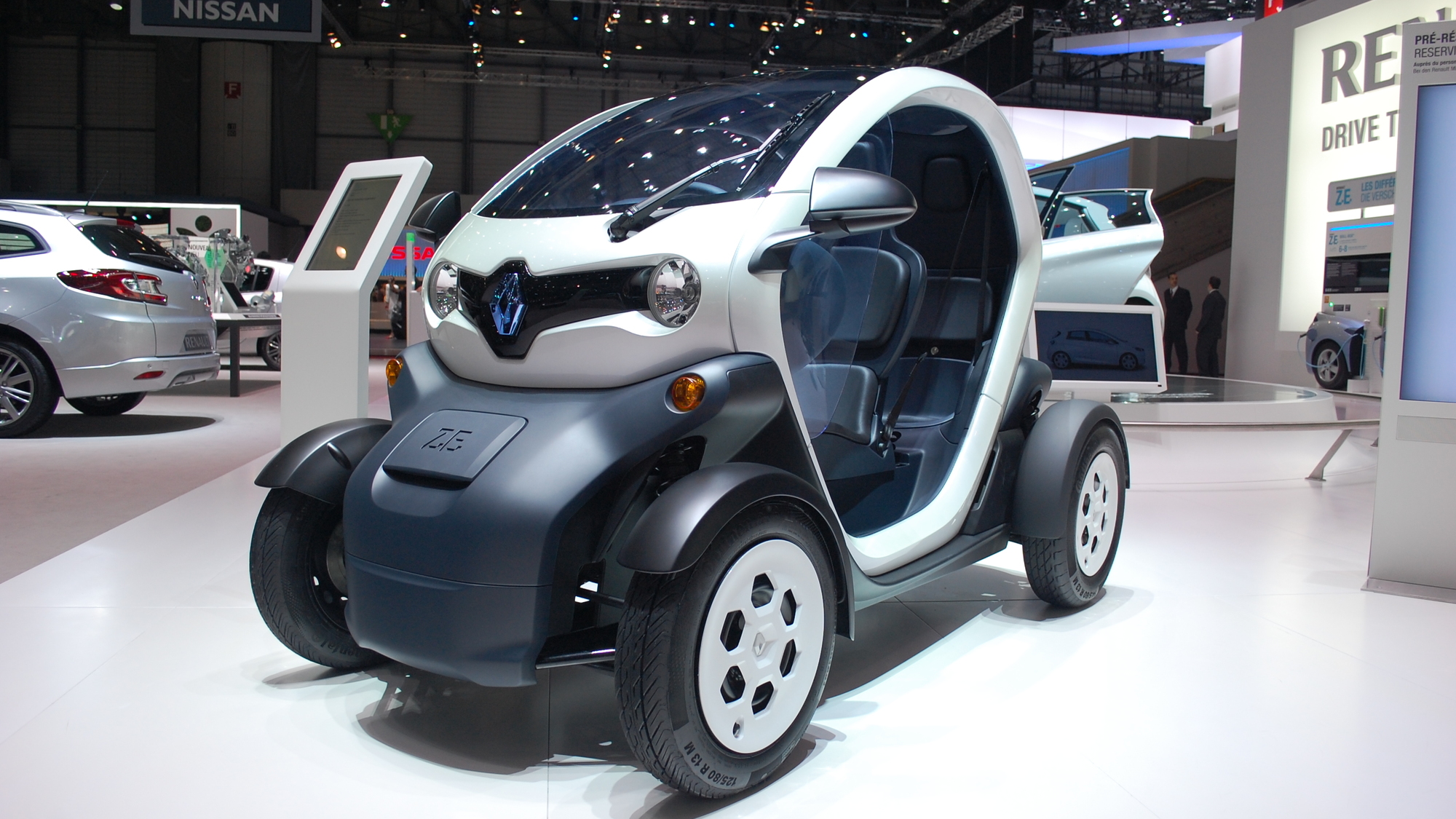 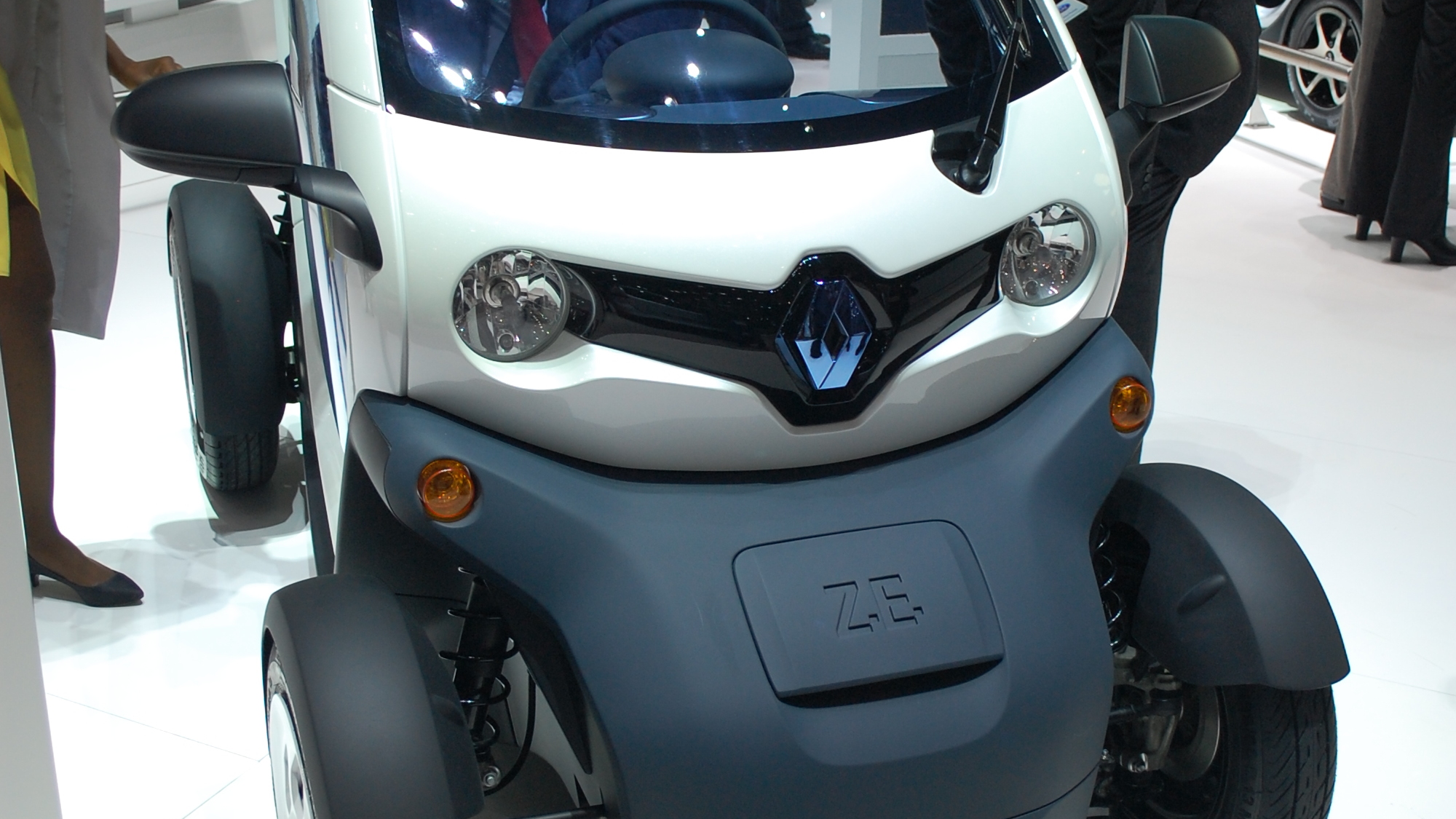 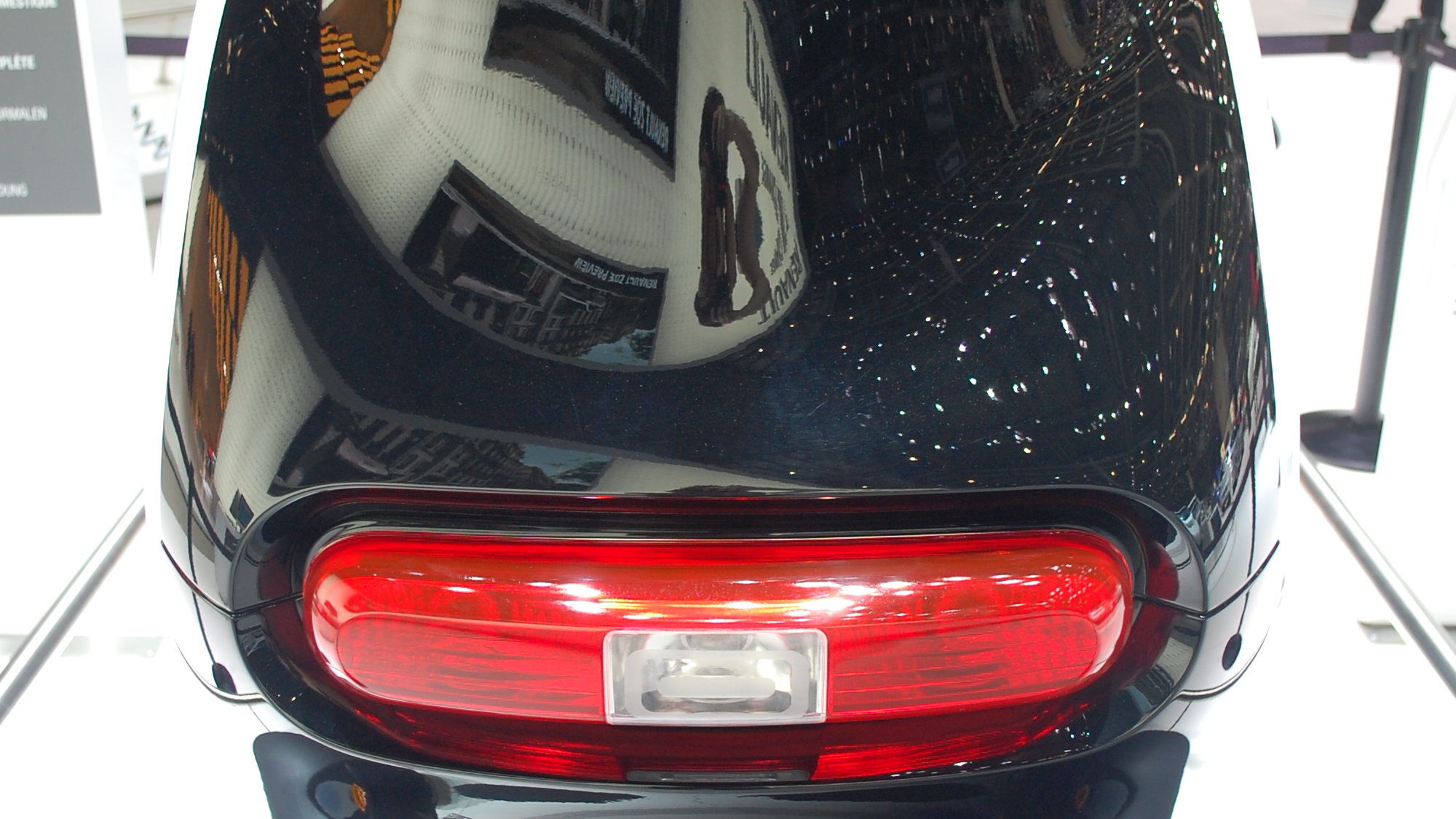 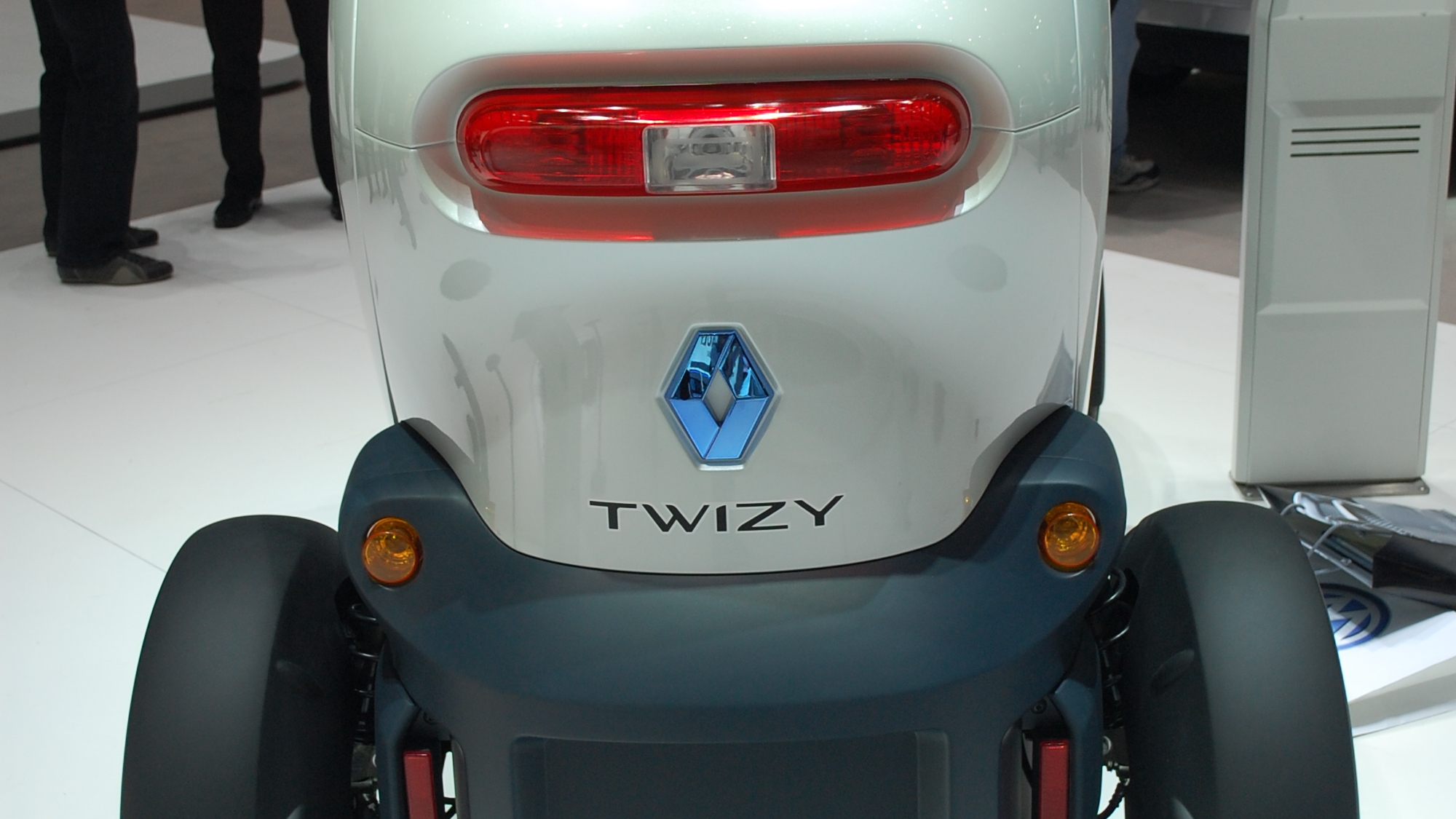 Is it a car? Is it a scooter? No: It's a Twizy, which could be considered a combination of the two.

If you're following the world of electric cars with a keen eye then you'll no doubt be aware that French manufacturer Renault is taking electric vehicles quite seriously, just like its Japanese partner Nissan. A few years back Renault revealed a group of four electric 'Z.E.' concepts, the Fluence sedan, the Kangoo delivery van, the Zoe subcompact and the Twizy microcar.

Since then we've seen the DeZir electric sports car concept and a further preview of the Zoe. We've also seen the Kangoo and Fluence in their production form, the latter of which we even got a chance to drive at the 2011 Geneva Motor Show.

A production specification Renault Twizy was shown at the Paris Motor Show last year, but Geneva was the manufacturer's chance to reveal the price, specifications and to let the press and public get a closer look at the diminutive EV.

The price is right

Importantly, the Twizy will not be an expensive electric vehicle. Going on sale in Europe at the end of 2011, it will start at 6,900 Euros, or just under $9,600 at current exchange rates. This makes it $1,000 cheaper than the cheapest new car in the U.S. today, Hyundai's Accent.

Obviously you can't draw direct comparison between the two, not least because there are no current plans to bring the Twizy to the U.S, and secondly because the Hyundai is a proper car with space for four, reasonable luggage space and the ability to drive long distances if you're that way inclined. The Twizy offers none of these, but for a production EV from a major manufacturer, a sub-$10,000 price tag is a big deal.

Renault intends that its electric cars should cost no more to buy than the equivalent gasoline or diesel model, though part of that business model involves you leasing the battery on a monthly plan for about $63 a month. This does bring the cost down, but we can see it being more useful for the second or third owner of the vehicle who might otherwise be worrying about the impending cost of battery replacement.

What do I get for my money?

That basic price gets you a basic Twizy. In other words, a vehicle just over 7.5 feet in length by four foot wide and a little under five foot tall. If this sounds like a recipe for a rollover then rest easy - the Twizy is a very light vehicle (just 992 lb) with the vast majority of its weight very low down. The skinny 145-section tires will ensure you won't have enough grip to tip it, anyway.

The basic Twizy gets a 4 kilowatt (5 horsepower) motor with a 7 kilowatt-hour battery mounted under the driver seat. This doesn't sound like - and isn't - a lot of power, but the basic Twizy's raison d'être is to be driveable without a licence in many European countries, which usually allows European 14-16 year olds to take to the roads on 50cc mopeds and diesel quadricycles.

A more powerful Twizy with a 15 kilowatt (20 horsepower) motor is available for those with a driving licence and the desire to travel a little quicker. 20 horsepower will take a light motorcycle to around 60 miles per hour, so the Twizy should be similar. The narrowness should help with filtering between traffic in crowded European city centers and either motor should give enough shove for nipping into gaps in traffic.

Your money also gets you a very basic but quite charming vehicle with some neat design touches.

The exterior is defined by the tiny protruding wheels shrouded in plastic cycle fenders. The whole body is plastic in fact, which ensures light weight and low cost of production, as well as a resistance to light damage. The footprint actually looks relatively wide for the size of the car, which should help with stability. The suspension components are open to the elements but they're all powder-coated so should resist harsher weather well.

The charging port is under a large flap on the car's "nose" and the facial theme continues with a large Renault badge flanked by two eye-like headlights. The shape in profile has echoes of Smart's "Tridion" safety cell, with an ovoid crash helmet-like shape.

Renault had both a 4kw and 15kw Twizy on display, though only the 4kw was available to sit inside. The term "inside" is of course relative as the basic Twizy has no doors whatsoever. This sounds like an oversight until you realise that a typical teenager's scooter doesn't have doors either, nor does it have a long panoramic polycarbonate roof, nor will it have been tested for crash safety.

The Twizy will be a little more comfortable than the average scooter too, but don't go expecting car-like refinement. The Twizy's seats are hard plastic and proud of it. This is obviously as a result of weather-proofing but the seats seem well shaped and both make use of two seatbelts, one a normal three-point belt and the other an over-the-shoulder affair to secure the other side of your body.

In the interests of thorough reporting, we tried the back seat for size. At all of 5'8" it was quite a squeeze even with the rigid-backed driver seat slid all the way forwards, but once ensconced there was plenty of legroom with space either side of the driver, though ladies might want to sit slighly side-saddle as an elegant position it is not!

Back in the front, the steering wheel is similar to many other Renaults and contains an airbag. The dashboard is basic with lockable cubbyholes on either side of the wheel and a simple instrument pod with a bold monochrome LCD display. Visibility, as you'd expect, is brilliant.

What does the Twizy do for us?

Whether it will ever be available to customers Stateside is another matter, though with Renault and Smart co-developing the next ForTwo, some of the Twizy's technology may well make it to America.

In its current guise, it presents an interesting answer to the question of urban mobility, though it naturally won't suit a great many consumers. We mentioned the Hyundai Accent on the first page, and this sort of car can reasonably be assumed to offer the consumer everything they need from a car - personal transportation, at a low price and without needing to get wet. It also offers adequate performance for modern roads.

You could say that the Twizy only offers two of those things. It'd still be a little uncomfortable in very bad weather, and especially in the lower power format it's not a performance car. Even the 20 horsepower version isn't suitable for freeway use.

This probably isn't a problem in Europe though we couldn't see it working in the States, at least not everywhere. Certain cities - San Francisco, for example, would probably take the Twizy to their hearts. Given the right sort of roads and clement weather it would do everything asked of it - as it's sure to do in European cities such as Paris, Rome and Madrid, where weather is generally fine and the streets often busy and narrow.

The price is certainly impressive but it would rule out the Twizy for family duties - as a sole vehicle for an inner-city dweller or as a runaround for a family it might be fine, but it couldn't be a family's sole electric vehicle. Again, in the States even a runaround might be expected to have extra seats or travel long distances occasionally.

The Twizy is very much a horse for a particular course. Overall we really liked it. It's innovative and well designed, and will bring electric motoring to a much larger audience in Europe. It's not luxuriously appointed but offers more comfort and storage than the three-wheeled scooters it's up against and doesn't cost a great deal more either.

Great concept, but not one that would work any time soon in the U.S.