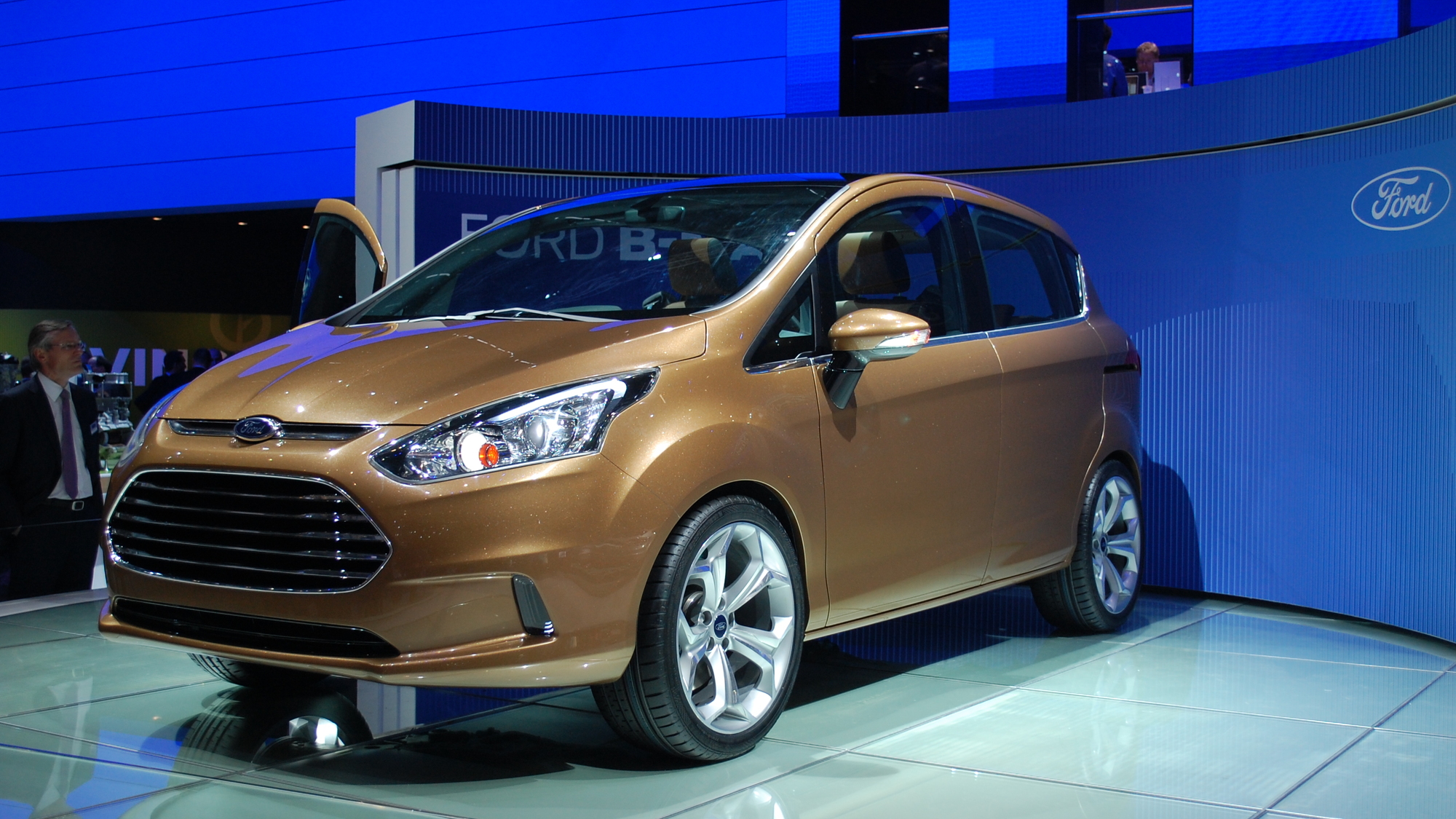 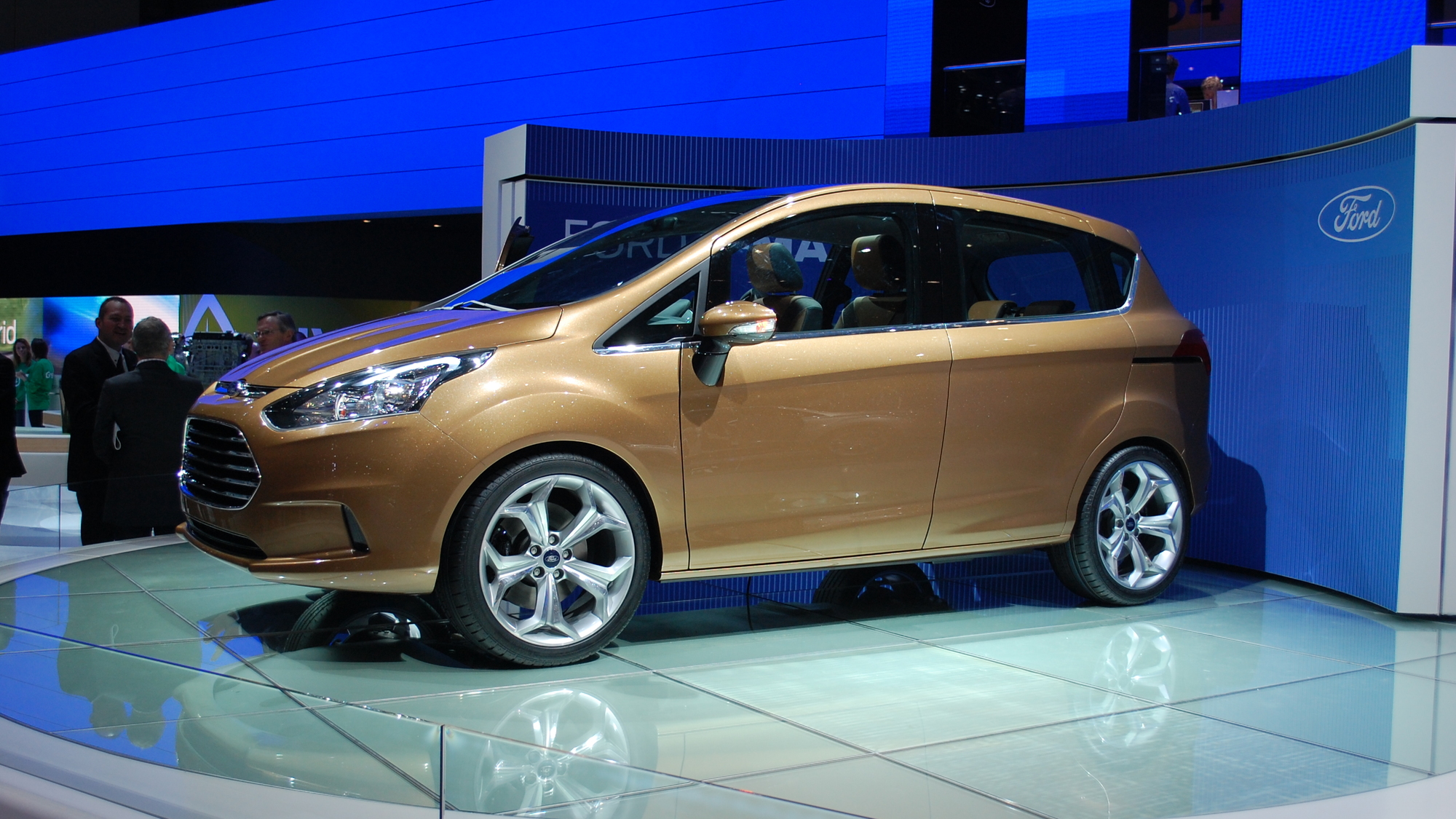 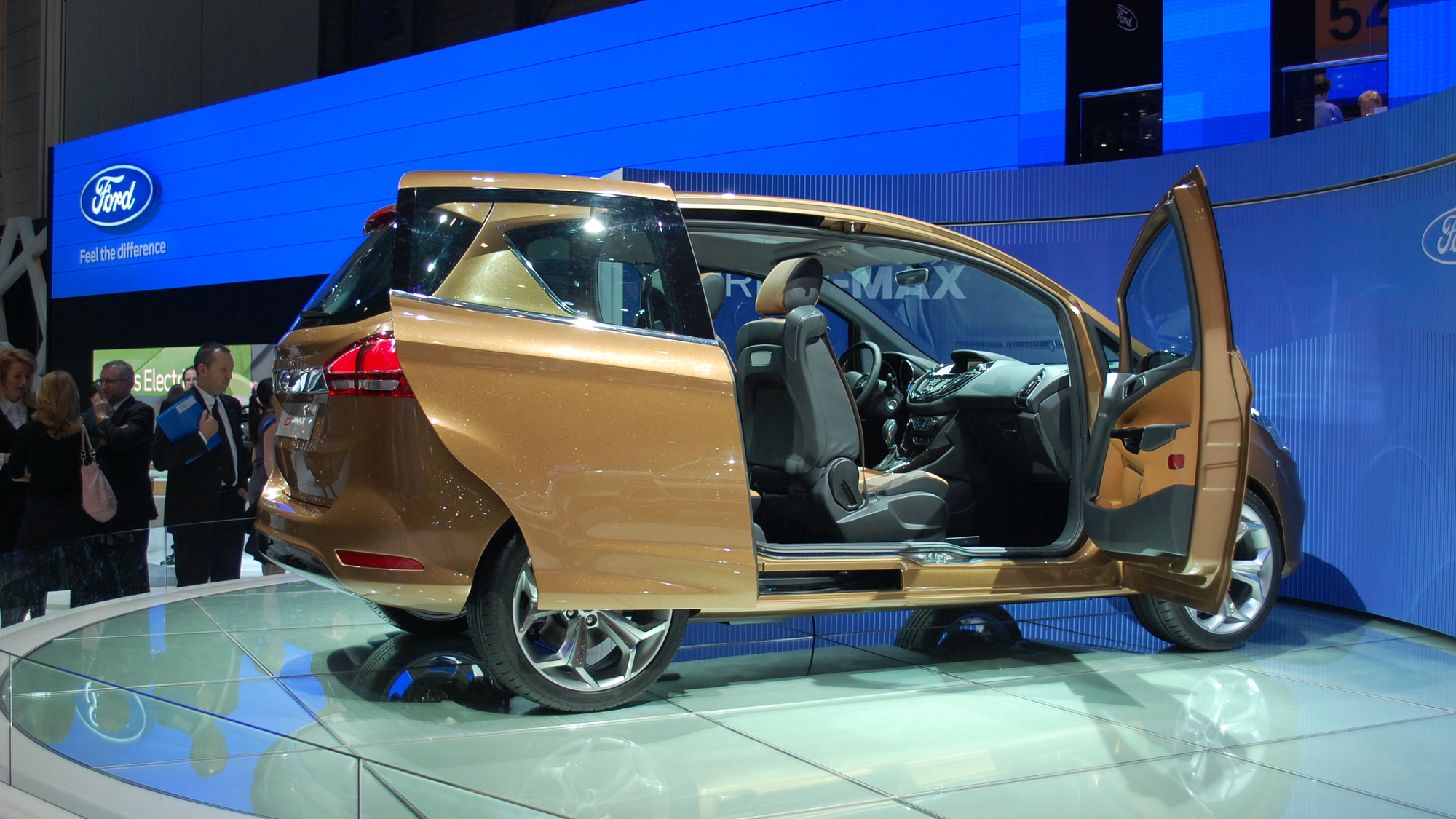 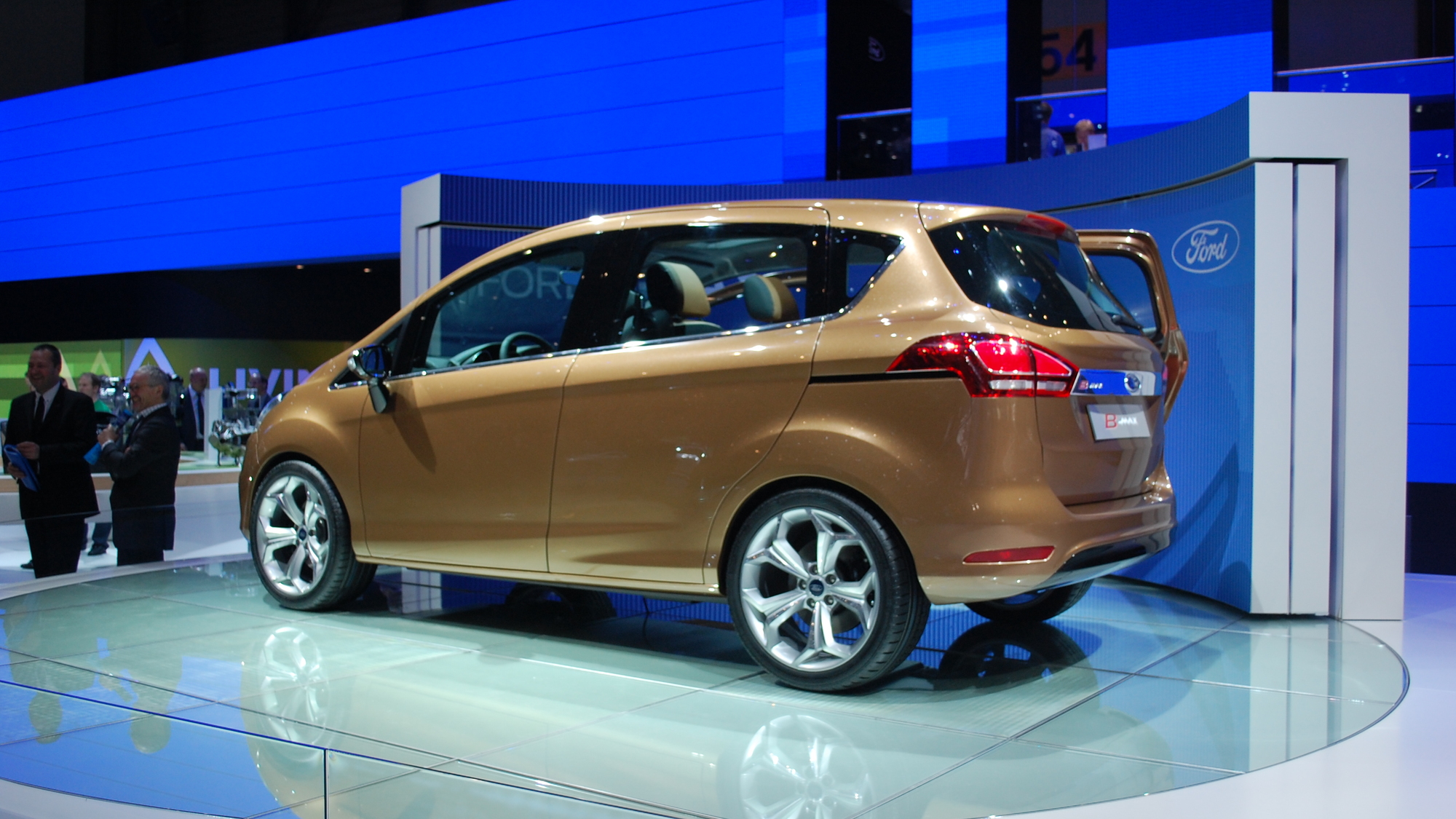 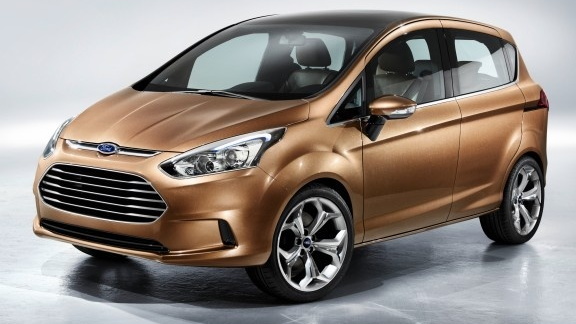 But amidst all the outrageous styling and one-of-a-kind features, several important production cars showed up as well.

Not all of them were called production cars, mind you. Toyota, Ford, and Audi all showed off new models thinly disguised with the "Concept" label stuck on the back.

But make no mistake. Every car shown here will go into production, offering new, more fuel-efficient entries in segments not previously identified as green.

While technically Ford calls this the "B-Max Concept," don't be fooled. This is a production vehicle in all but name.

Whether it comes to the States is less clear. As the name indicates, it's a minivan (Europeans call them "people carriers") on the B-segment, or subcompact, platform that underlies the 2011 Ford Fiesta.

The B-Max, in fact, resembles nothing so much as a taller Fiesta station wagon. The name is a clear echo of the 2012 Ford C-Max, which is essentially the same concept on the larger 2012 Focus compact platform.

But the little B-Max has some neat tricks up its sleeves.

For one, there's no B-pillar between the front and rear doors. The front doors swing open conventionally, the rear ones slide back as they do on a minivan--and the entire opening is unimpeded by pillars, thanks to an ingenious "pillar-in-door" structure.

If the B-Max did come to the U.S., it would likely get a slightly larger powertrain than the one Ford is showing it with in Geneva. That's a tiny turbocharged 1.0-liter three-cylinder, the smallest-yet example of Ford's EcoBoost line of turbocharged, downsized engines.

We think the B-Max is completely cool, but then, we like small, tall, boxy cars with absurdly high fuel efficiency (this one will likely get more than 40 mpg on the European test cycle).

What do you this? Thumbs up or down on the Ford B-Max? Leave us your thoughts in the Comments below.

This one, too, is technically called a concept, but it's a thinly disguised production model that will go on sale at the end of the year.

Toyota has said it will offer a hybrid variant in every model it sells by 2020. The new Yaris Hybrid will take the company's Hybrid Synergy Drive system into a subcompact car for the very first time.

While the Yaris Hybrid may compete in the States with the Honda Insight, its real target is the Honda Fit Hybrid that is soaring up the sales charts in its home market of Japan, in part because it's the least expensive hybrid on the market.

That's a huge blow to Toyota, which launched the world's first hybrid in 1997. And the Yaris Hybrid will offer full hybrid features, including the crucial all-electric running at low speeds, unlike Honda's mild-hybrid Integrated Motor Assist system.

The Yaris HSD Concept has several aerodynamic aids similar to those on the larger Prius hybrid, including flat, vertical "aero corners," a large integrated rear spoiler, and even "aero-efficient" door handles.

The video cameras that take the place of rear-view door mirrors likely won't make it into production, however. And the roof-top solar panels that provide enough power to assist with ventilation will be a pricey option, if offered at all on this subcompact.

The all-new 2012 Yaris will arrive in gasoline form later this year, with the hybrid version following next year.

Will the Yaris Hybrid come to the States? Given the underwhelming reception to the subcompact hybrid Honda Insight, don't bet on it.

The current-day 2011 Audi A3 is now pretty long in the tooth, but help is on the way.

This crisply styled concept previews the next generation of Audi's A3 compact car, and it's a stunner.

The fact that the concept was shown as a sedan underscores the importance of the A3 to Audi's fuel-economy averages in North America, where we buy far more sedans than hatchbacks.

Europeans will largely buy the new A3 hatchback models that will also be built on the same platform. But the A3 sedan appears to be not much smaller than the previous Audi A4, a hugely popular model all over the world.

The new A3 will be launched next year as a 2013 model. This one's not particularly green; the concept is powered by nothing short of a 408-horsepower turbocharge five-cylinder engine, along with quattro all-wheel drive.

But there'll be a new version of the traditional Audi A3 TDI model, the same vehicle that was named 2009 Green Car of the Year.

We liked the Audi A3 Sedan Concept so much, in fact, that we're providing a pair of photo galleries of the car.

This one didn't even make the pretense of being a concept; this is the production 2012 Kia Rio hatchback that will appear in showrooms within months.

Here in the States, the all-new 2012 Kia Rio sports a 138-hp 1.6-liter engine with direct injection that should provide 40 mpg or more on the highway.

Altogether, the 2012 Kia Rio will be offered in four-door sedan, and both three-door and five-door hatchback styles.

It should compete neatly with the 2011 Ford Fiesta, the plainer but appealing 2011 Mazda2, and ultimately, the refreshed Toyota Yaris above.

Sales will start sometime in late summer or early autumn.

We've covered this one before a few times, but there's nothing like seeing it just as it appears on the show floor.

Despite a price of $95,900, the 2012 Panamera S Hybrid is expected to get stellar gas mileage ratings.

In fact, it may demolish the 2012 Infiniti M35h Hybrid's claim to being the only car in its class with more than 300 horsepower and a highway rating of 30 mpg or better. (If you think they compete head-to-head, anyhow, which they probably don't.)

On the European combined cycle, Porsche says it'll give you 34.6 miles per gallon on special Michelin low-rolling-resistance tires, or 33 mpg on standard tires.

Pretty impressive for a 380-horsepower 3.0-liter supercharged V-6, right? It's the electric motor between the engine and transmission, powered by a lithium-ion battery pack, that makes the difference.

This is the latest iteration of Volkswagen Group's hybrid system, which is now offered in the 2011 Porsche Cayenne S Hybrid and its half-brother, the 2012 Volkswagen Touareg Hybrid.