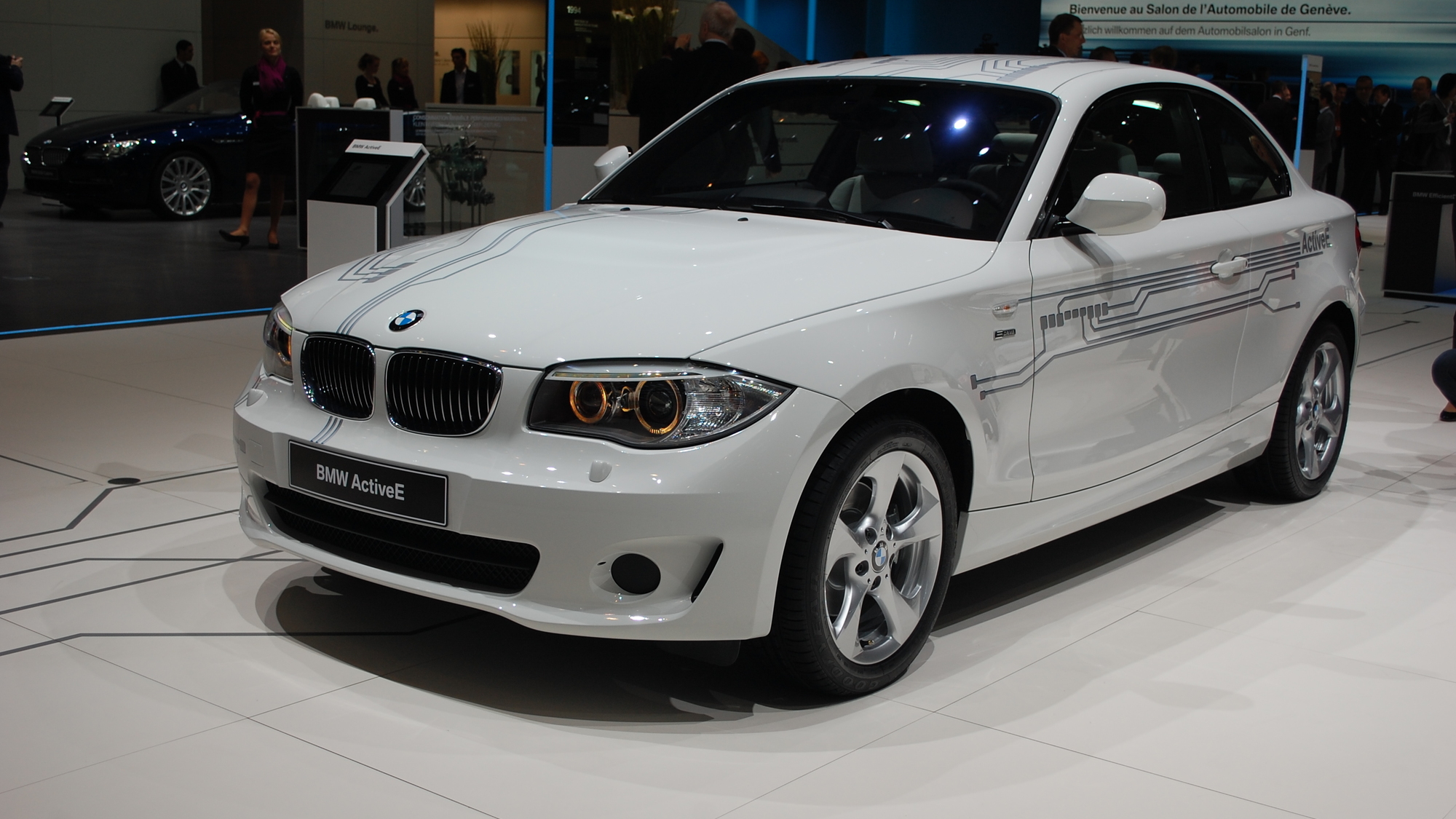 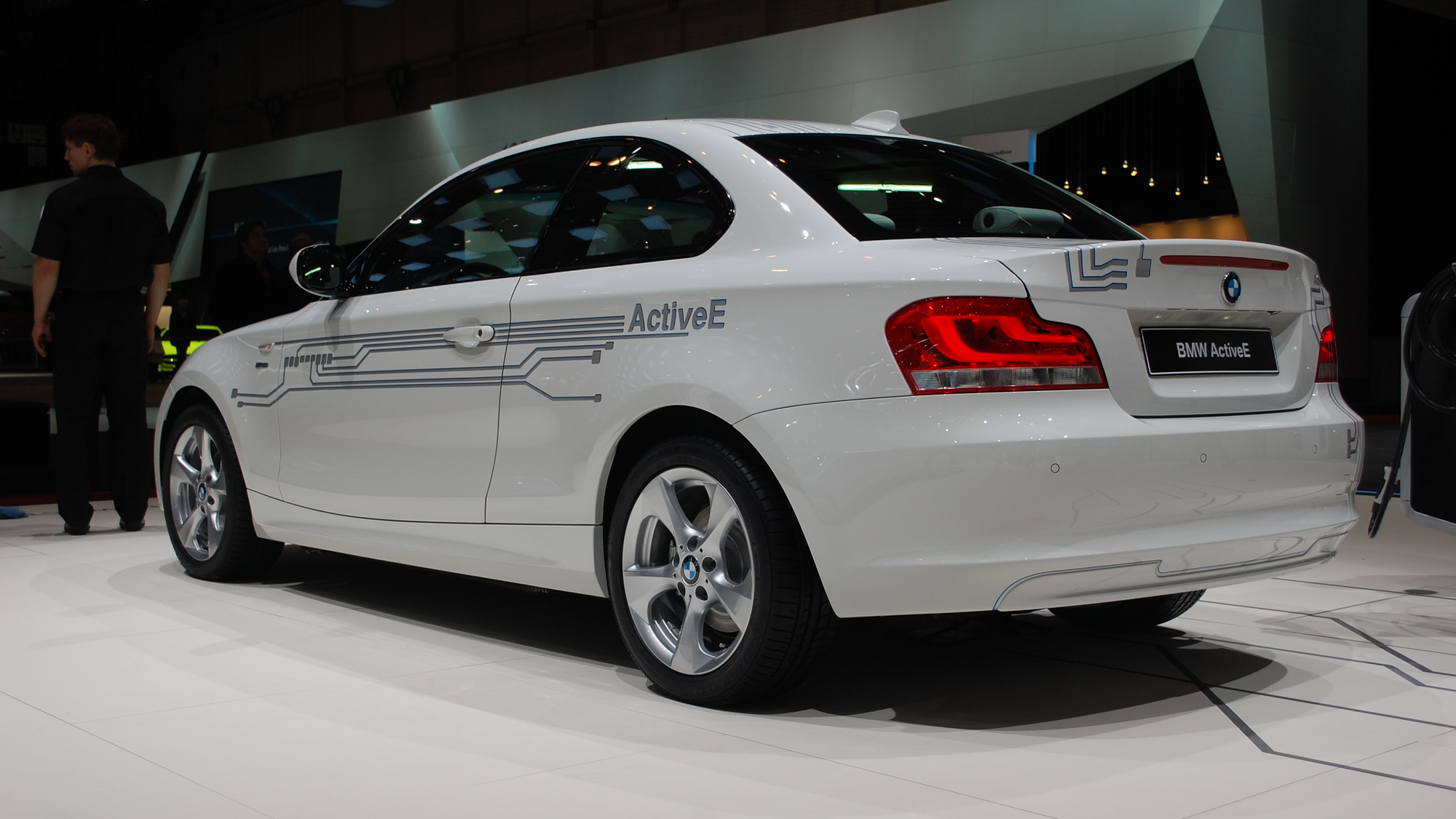 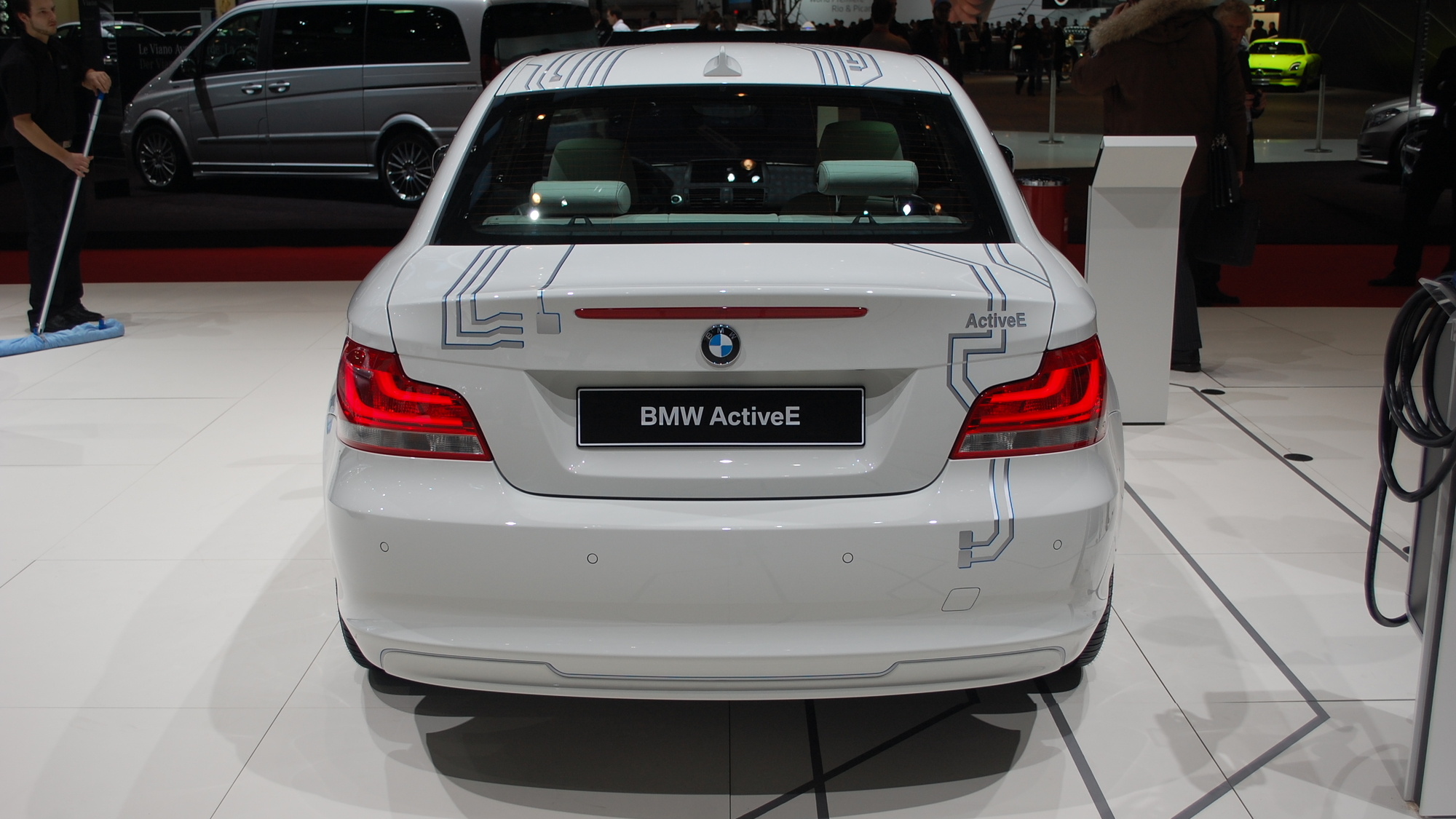 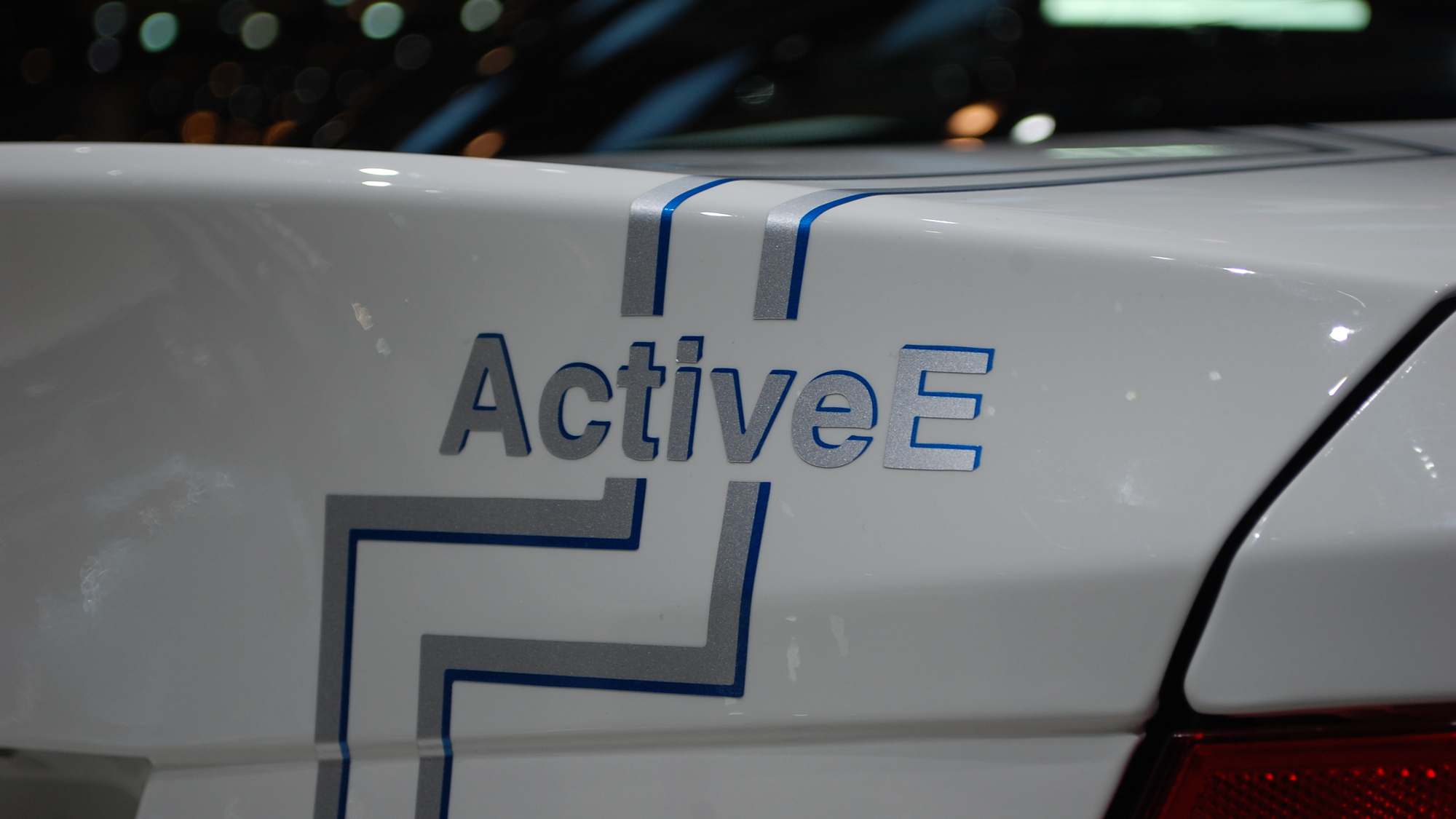 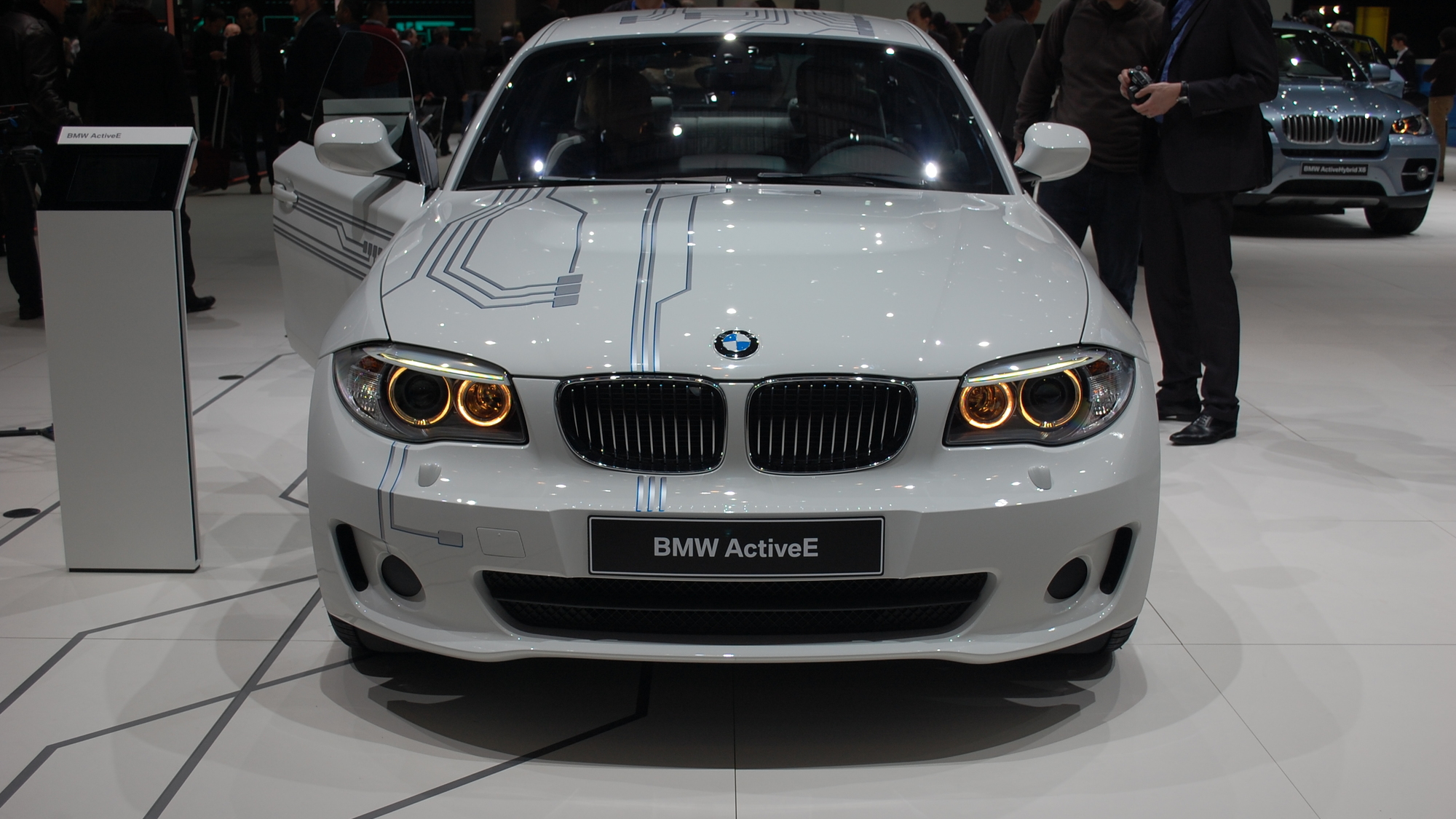 BMW are developing some of the world's most anticipated electric cars at the moment with the i3 and i8 spearheading the launch of BMW's 'i' brand. The 1-Series based ActiveE is the first pure electric car to eminate from Bavaria since the MINI E, and the production car makes its world debut at the 2011 Geneva Motor Show.

The ActiveE is an important car for BMW as their first foray into making a useable four seat electric vehicle. Based on the 1-Series Coupe, the regular four and six cylinder gasoline and four cylinder diesel engines make way for a battery pack and electric motor, still driving the rear wheels.

Unlike the compact MINI E, the 1-Series platform has enough space to ensure that rear passengers can come along for the ride, and also offers a useful, if reduced, trunk space.

The 1-Series Coupe is a fine looking car and the ActiveE does nothing to change that, the display model only giving the game away thanks to some snazzy decals and for those looking more closely, the lack of exhaust pipe. The charging port is hidden in the space normally occupied by the fuel filler, giving nothing away to the casual observer. This is all part of BMW's plan to ensure the ActiveE maintains the essence of a BMW.

Inside, it's all quite familiar to 1-Series drivers too. Dashboard layout is the same, and the car uses a gear selector similar to the joystick-type control used in automatic transmission BMWs. More clues as to its true identity though can be discovered through a look at the instruments and a cycle through the traditional BMW iDrive controller and ConnectedDrive.

Where normally you'd find a tachometer, a large 'Charge', 'Ready' and 'eDrive' indicator now sits, with a charge level gauge replacing the usual MPG dial. At rest, the needle sits to the side. A press of the starter button sends the needle up to Ready, as you can see in our video below:

During driving, the needle is sent into the eDrive section of the dial, and when lifting off the accelerator pedal or braking, it swings towards Charge. Down by the gear selector, a small 'Eco Pro' button can be used, which enhances the car's range by backing off the power to the benefit of energy consumption.

The BMW's user interface now features an eDrive option. This has four sub-menus, each of which gives the driver further information on the electric drivetrain. The first display shows the kilowatt-hours being used throughout a journey, and plots a line graph as you move along. The second display is a large charge meter, and highlights whether the power is going into our out of the battery. The third shows charge level and battery temperature, and the fourth is an Eco Pro display which gives you driving tips when Eco Pro is engaged.

When the car is charging, the second menu displays a graphic to this effect. You don't need to get in the car to see when it's charging though - the normal BMW red immobiliser light on the rear-view mirror housing is replaced by a clear light that glows blue when charging. Charging time is 4-5 hours on 230 volts, 32 amps and 8-10 hours from a standard socket.

Although you get the rear seats you never had in the MINI E, you do lose a little trunk space, the motor taking up a little more room at the back than BMW's usual rear transaxle. However, if you're in the market for a 1-Series Coupe then practicality isn't likely to be the strongest priority, and it's certainly better than the cubbyhole offered in the MINI E.

The motor itself produces 125 kilowatts of power, or for the more traditional and less European amongst us, 170 horsepower. That's 60 horsepower less than the 128i Coupe on sale in the U.S, but as with all electric cars, the numbers don't do justice to the performance at lower speeds. Nor the torque, with 250 Nm (184 pounds feet) delivered instantly and smoothly. 60mph is said to arrive in 8.5 seconds and top speed is limited to 90mph - plenty for normal driving.

The ActiveE is set to hit the road soon, though don't go scrabbling for your piggy-bank just yet, as BMW are producing it for lease only and in limited numbers - less than 1,000. The cars will be spread amongst the U.S, China and Europe.

What the ActiveE does do is offer BMW an ever greater test-bed of drivers collecting data for their future electric vehicle projects, so it remains an incredibly important car for the company.