David Peilow, a regular at TeslaMotorsClub.Com, took some time off from his work to prove that not all electric cars were slow and impractical for long-distance driving.  In a brilliantly engineered publicity stunt, he left the London Tesla Showroom early yesterday morning and headed north, aiming to reach Edinburgh in Scotland by midnight.

Succeeding in his quest, Peilow arrived yesterday, completing the entire trip including recharges, in around 18 hours.

In contrast, the BBC’s Brian Milligan was last seen complaining on the BBC’s website about the way the MINI E’s range was affected by cold weather and use of the car’s heater.  Milligan left London on Monday, but has still to arrive at his Edinburgh finish. 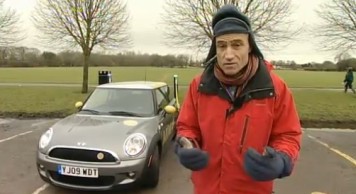 As we pointed out yesterday, the difference between the two methods of travel are quite obvious. Milligan chose to only use public level 2 charging outlets capable of providing at most 3 kilowatts of power. On the other hand Peilow chose to make use of higher power level 2 charging stations capable of providing between 7.3 and 16 kilowatts of power.

Hardly an equal race, but that wasn’t the point behind the challenge. Peilow and a group of increasingly frustrated electric vehicle advocates are tackling the BBC’s continued scepticism and lack of support of electric cars.

The group, including EV advocate and Actor Robert Llewellyn objected to the blanket generalization that the BBC has applied over the past few years to electric cars, essentially  ignoring differences between a Tesla Roadster and a city runabout such as the G-Wiz.

But even in the face of defeat, the BBC has apparently chosen to ignore Peilow’s success.

Yesterday, Milligan acknowledged on his MINI E blog that a challenger had left London in a Tesla to prove him wrong.

Regular tweets from both Peilow and his supporters to the BBC kept him updated of their progress and ultimate success. But on the BBC’s flagship breakfast program this morning there was no mention of the Tesla’s journey, only Milligan’s continued frustrations at the long charging times, slow driving and cold weather affecting the MINI E’s trip.

In some ways, Milligan’s frustrations are valid, but not true of all electric cars. The MINI E is a prototype electric car. It does not have any thermal battery management, meaning cold weather does affect its range as battery packs drop below peak operating temperature.

In contrast, the 2011 Tesla Roadster Sport 2.5 driven by David Peilow is a production car featuring thermal battery management, meaning the car’s battery pack is at peak operating temperature at all times and suffers very little in moderately cold weather, as we’ve proven in the past.

So what do we learn from all of this? 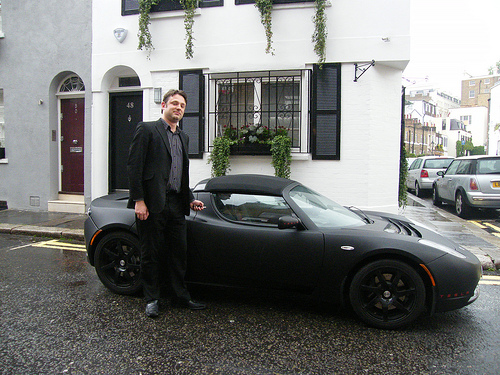 Firstly, that thermal battery management is important to electric cars in order to allow them to function correctly in cold weather.

Secondly, long distance trips are practical in electric cars, but only if high power level 2 or ultra-fast level 3 charging stations are deployed by governments worldwide. Given the apparent infrequency of long-distance trips like this in the average person’s daily life however, we can’t see it being a problem for most consumers.

On behalf of everyone at HighGearMedia, we’d like to congratulate David Peilow on his fantastic achievement.