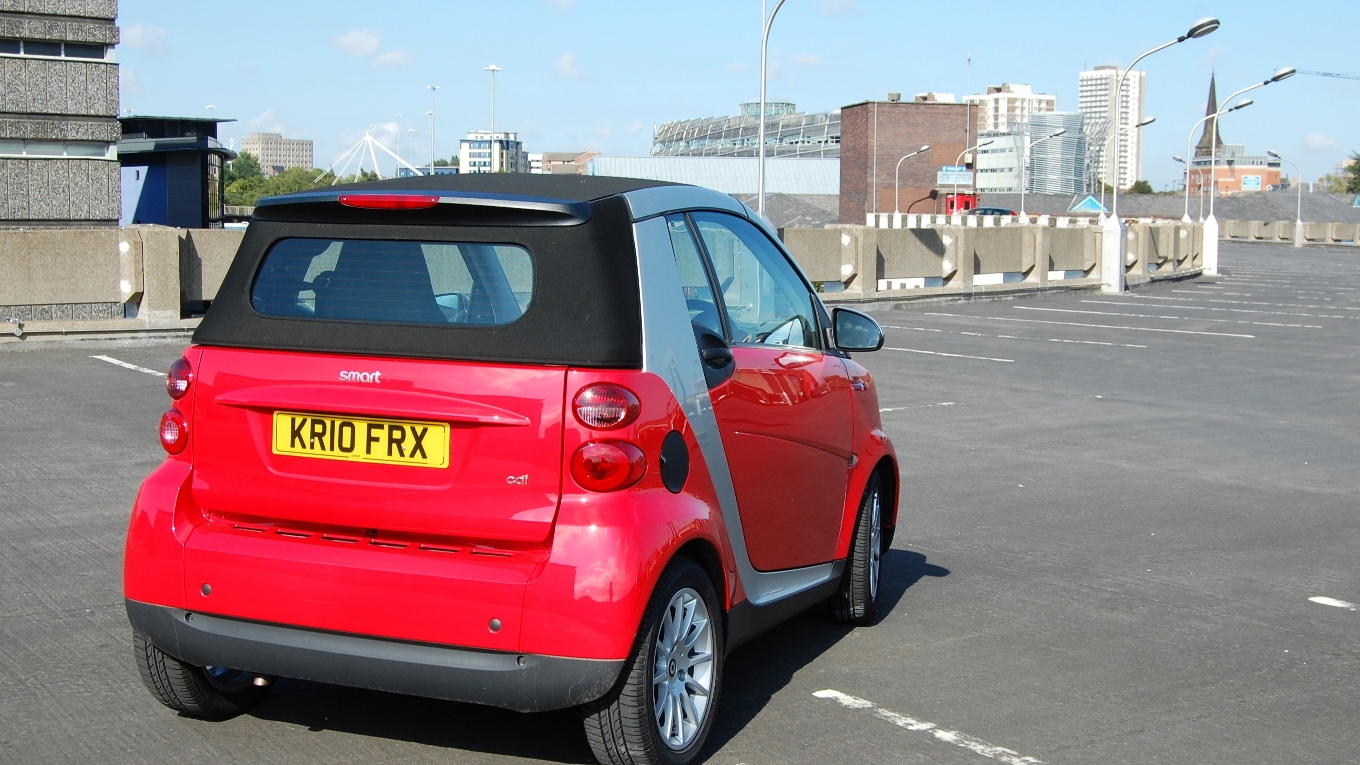 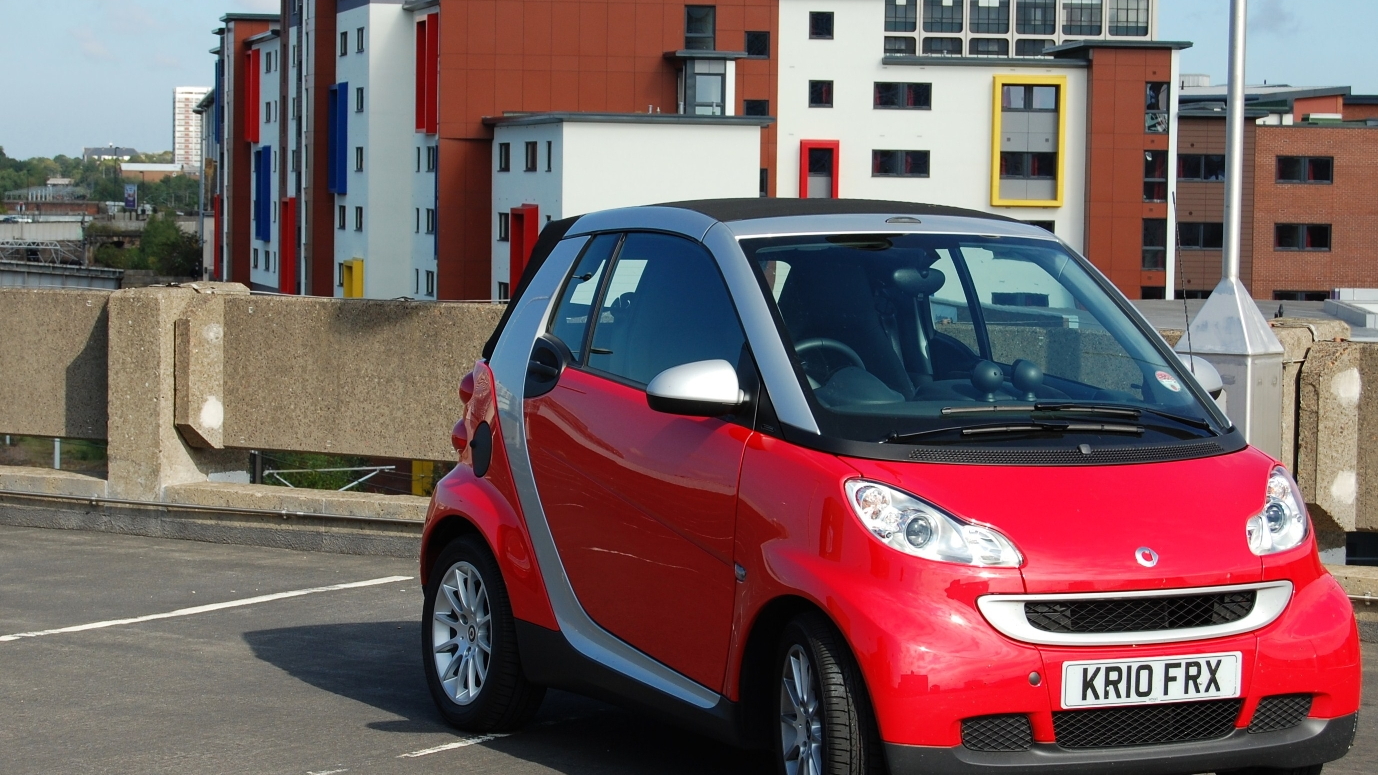 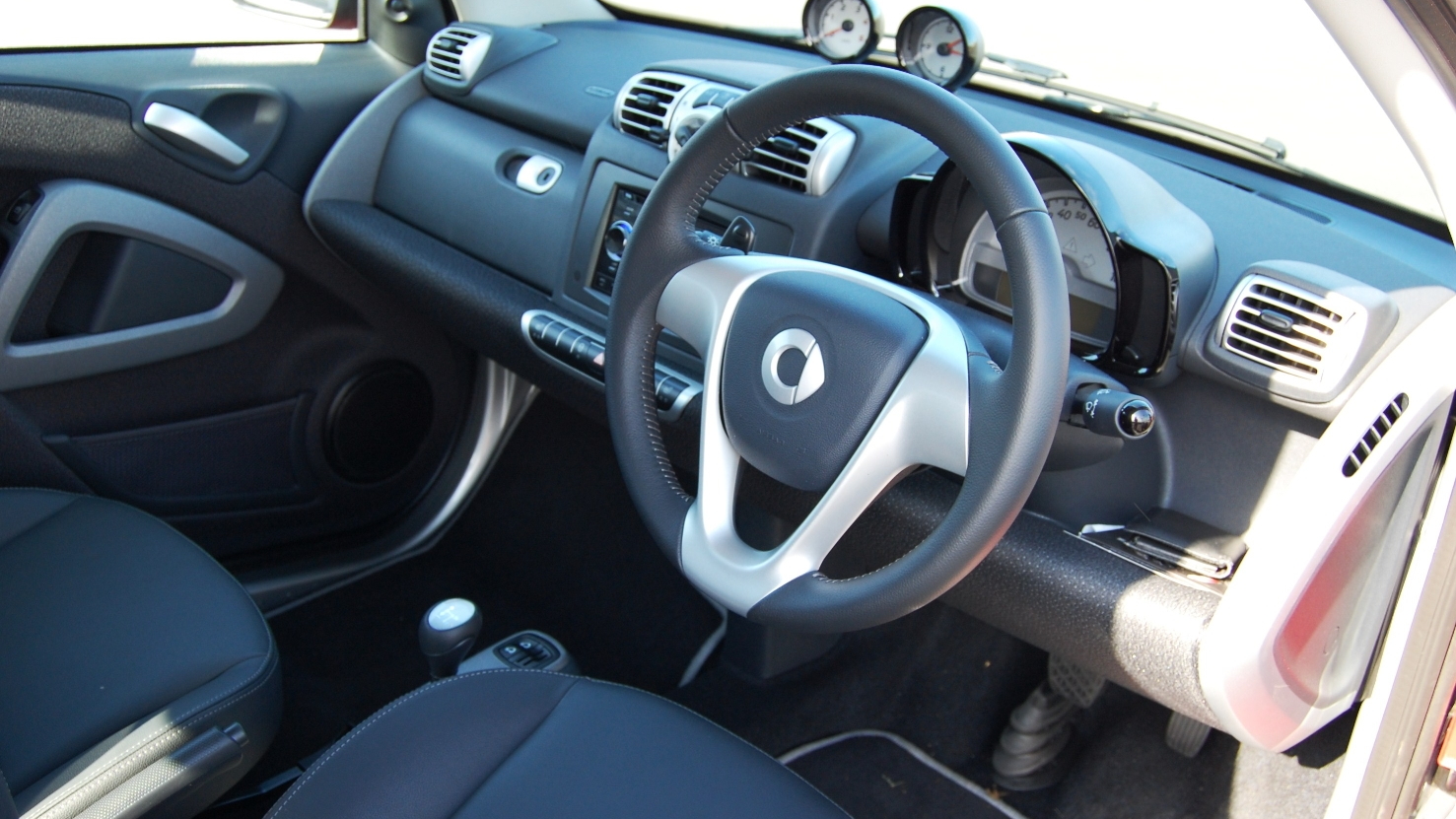 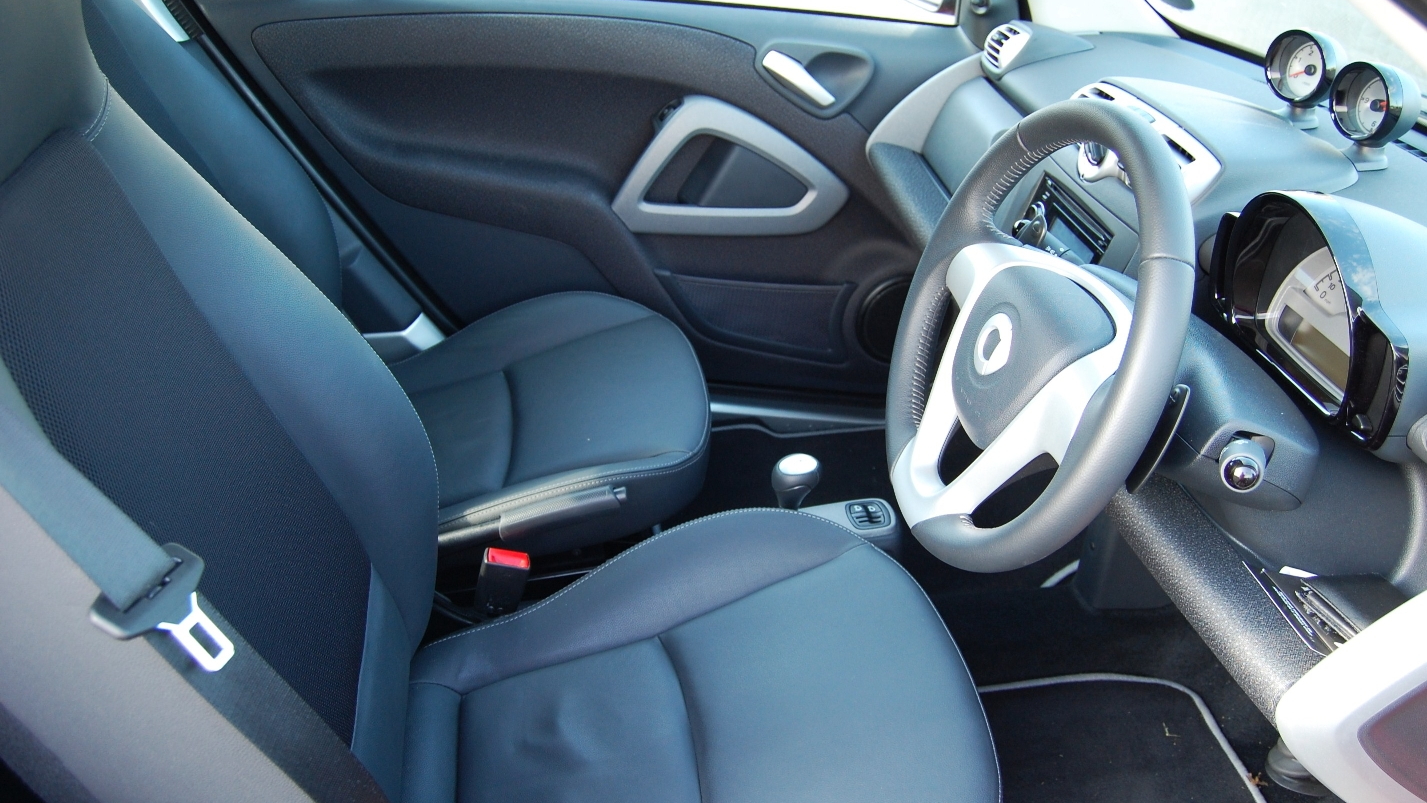 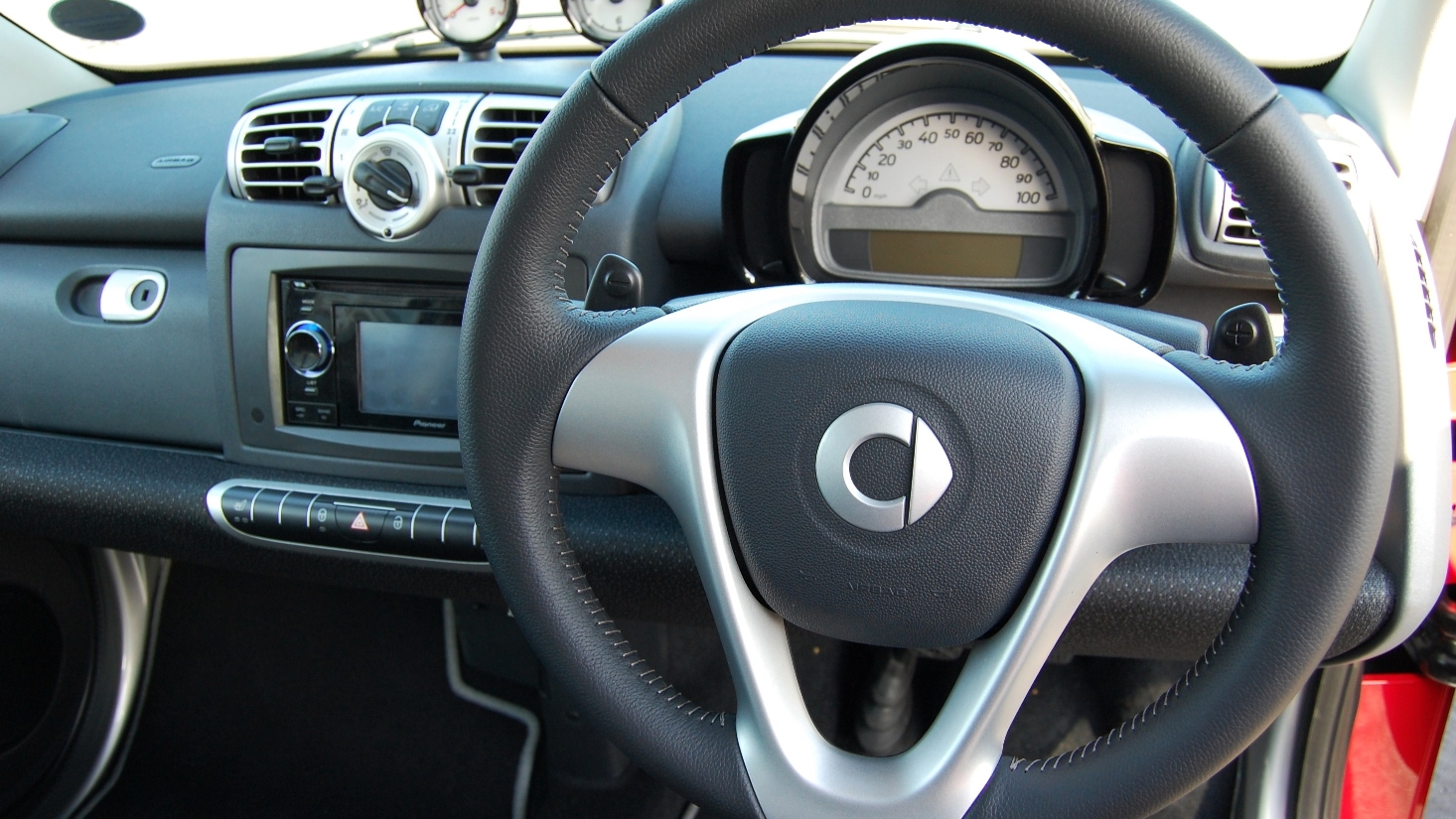 You'd be hard pressed to call us fans of the 2010 Smart ForTwo here at GreenCarReports. The tiny two-seater is a novel idea unfortunately let down in execution.

Whilst the car is spacious despite its exterior appearance and we can't fault equipment levels and quality, some mechanical aspects let the side down. The engines themselves are characterful little units and produce reasonable power, but the 'smart-shift' semi-automatic gearbox is slow and jerky, hampering progress.

Probably the most pressing problem though is economy. The 33mpg city/41mpg highway ratings aren't much to write home about, especially with the 2010 Toyota Prius achieving 51mpg and 48mpg on the same cycle. Sure, the Prius costs more, but its performance and space are a whole lot better, and both cars appeal to the same green-minded buyers.

What if we told you though that the U.S. was getting the wrong car, and that the best Smart is actually being sold in Europe? There's just one catch: It's a diesel.

We've just spent a weekend and over 600 miles with a 2010 Smart ForTwo Cabrio Cdi, and it was an interesting experience.

The bad news first: The jerky gearbox is unchanged from the gasoline models. Changes are slow and elicit a rock fore and aft as you change up. However, what many reviews don't tell you is that this is only a worst-case scenario. The most staccato changes happen when your foot is welded to the floorboard in the fully automatic gearbox mode.

Switch to manual mode and the changes smooth out (a little) and even speed up (also by a little). Lift off the gas a little as you change and you can actually make quite smooth progress, even if you still won't be beating a Honda Fit from the lights.

Our test drive in the 2011 Smart Electric Drive the same weekend did highlight how much effort you need to go to to maintain smooth progress though, the electric car making low speed work incredibly easy and linear.

Low speed maneuvers in particular were particularly difficult, the transmission having no "creep" function like a regular automatic meaning finding the automated clutch "biting point" was a hit and miss affair. Turning around in tight streets had us jumping backwards and forwards like a learner driver.

On that note, performance is... well, we make no bones about it. The diesel Smart is slow.

Top speed is limited to 85mph, and accelerating to 60 miles per hour takes a leisurely 16.3 seconds, meaning you need a leaden right foot to join fast-moving highway traffic. The engine is willing enough though, even if it does get a little noisy at higher revs. That compares to Smart's quote of 12.8 seconds for 0 to 60 mph in the gasoline version.

We're not sure if the electronic limiter fitted to our car was having an off-day, but suffice to say our car managed an indicated speed higher than 85mph. At these speeds it felt remarkably stable, though later when we drove the car in windy conditions, keeping the car in a straight line was enough to induce sweaty palms.

Driving the car quickly kind of misses the point anyway. If you buy one expecting the road manners and performance of a sports car then you're buying the wrong car. Driven a little more sedately, the Smart can be quite pleasant and even fun. The three-cylinder engine spins smoothly (especially when warm) and the car feels light on its toes.

The ride is still a little on the rough side, a short wheelbase meaning both axles hit bumps in quick succession, the suspension unable to keep up. The trade off is in the corners, where even without power assisted steering the car can be made to dart about, making light work of traffic and twisty roads. Even grip from the narrow tires is acceptable, certainly enough to cope with city conditions. Again, the car is no Boxster, but it's more fun than any tall, narrow city car has a right to be.

When you're darting around city streets though you notice some of the other problems. Visibility isn't quite as good as you'd expect. The slope of the A-pillars takes away a fair amount of vision - enough to hide another Smart car, as we discovered.

The rear-view mirror takes up a large amount of windscreen too, lying right in your eye-line. And in the Cabrio model at least, the rear screen is a little small. The view is no better with the roof down, the canvas sitting pram-style on the rear deck.

Trunk space is a little compromised in the Cabrio too, though we reckon you could fit a couple of travel bags in there, enough for a week away. Space in the regular car is better, as is access to the load area via the rear glass and drop-down tailgate. The interior itself is comfortable and quiet, and our 600 miles passed without issue.

We've left the best until last though.

Before setting off, we brimmed the tank and reset the trip. When we pulled into a gas station later in the day, 433 miles had passed beneath our wheels. We brimmed the tank again, and squeezed in seven gallons to the drop. This told us two things. Firstly, the fuel gauge is a little pessimistic, the light flashing with 1.5 gallons left. Our tank range could have been as high as 525 miles.

Most of the journey had been highway driving between 65 and 70 miles per hour, but a great deal of it had been done with fuel-sapping air conditioing and headlights running too. Half an hour had even been spent rushing around an unknown town when we got lost.

Smart claim 71mpg from the ForTwo Cdi, and we can see how it could actually be achieved, in contrast to the struggle many owners have had achieving even the average figures Smart quote for the gasoline model.

So there you have it. Buyers in the United States have been given the wrong Smart. The 2010 Smart ForTwo Cdi doesn't perform markedly worse than the gasoline model, but it extracts ridiculous distances from each drop of fuel.

If your commute involves a lot of high-speed driving then we'd advise you look elsewhere, but for gentler driving the ForTwo Cdi offers almost unrivalled economy and even a dash of fun.

Now you just need to convince Smart to bring it to the States...