Until now the words electric, car and Mercedes have had an uncomfortable union. While Mercedes' cheapest car, the diminutive Smart ForTwo, has an electric version, its 62.5 mph top speed is hardly enough to get car buyers excited about converting to electric.
But Mercedes super-sexy, bright yellow, Gullwing SLS AMG E-Cell may just change that.

As our own Nelson Ireson has already said, we've known that Mercedes have been working on an electric SLS AMG since it was announced at the 2009 Frankfurt motor show.

Germany's Autobild.de site was lucky enough to be given some time with the prototype E-Cell, which is set to hit showrooms in 2013.  If Bernhard Schmidt's enthusiastic write-up is anything to go by, they had a great time.

Accelerating to 62 mph in 3.8 seconds and going on to 124 mph in 10.8 seconds -- twice the top speed of Mercedes Smart ForTwo Electric Drive in half the time -- the AMG SLS E-Cell does not hang around.

The drivetrain consists of four discrete motors, one for each wheel, responsible for getting the incredible amount of torque the AMG SLS E-Cell prototype can lay onto the blacktop. The motors are placed on the car's chassis and linked to each wheel with a short driveshaft and can spin at up to 12,000 RPM, eliminating the need for any gearbox.

Using independent motor drive but placing the motors on the chassis gives Mercedes the advantage of all-wheel drive, but eliminates the handling issues created by using in-wheel motors, keeping the unsprung mass of each wheel exactly the same as it would be in the gasoline version of the AMG SLS Gullwing. 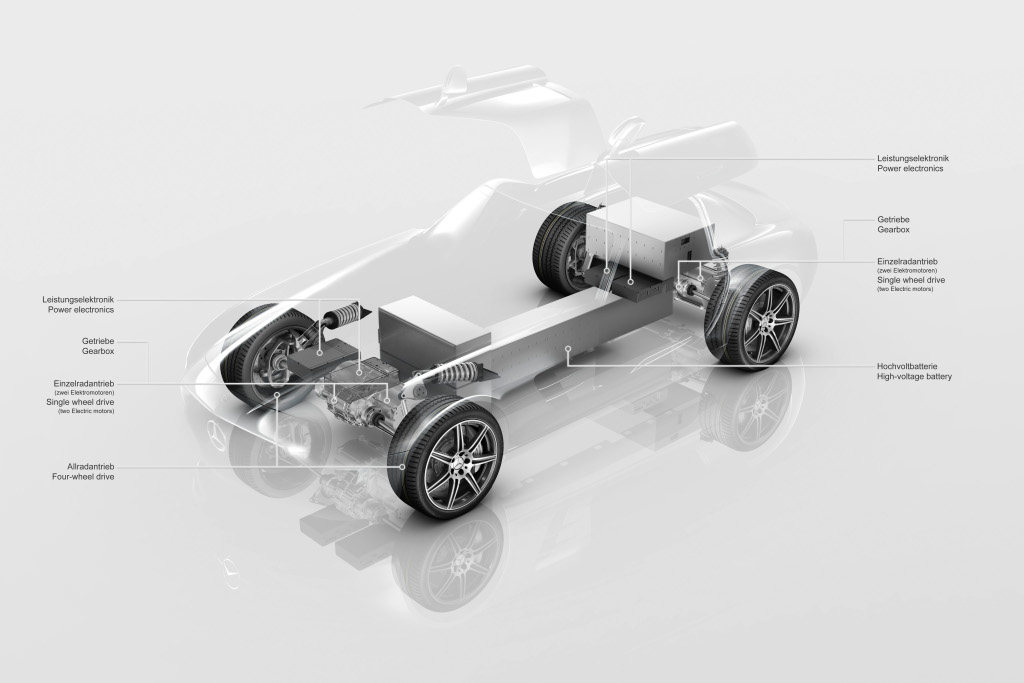 With a combined power of 392 kW the AMG SLS needs some serious stopping power. This is delivered with a dual braking system in which conventional ceramic disc brakes and independent wheel regenerative braking slow the car quickly while recovering as much energy as possible for more fun.

Interestingly, Mercedes use a paddle shift arrangement on the steering wheel to allow the driver to control just how hard the regenerative braking is. Unlikely to be much use on public roads it does enable tweaking for optimum track-day performance.

When it comes to range, expect a fairly large figure. While Mercedes don't list the range of the AMG SLS E-cell yet, the 324 lithium cell pack weighing a little over half a ton should certainly yield a range comparable to the 2010 Tesla Roadster when not driven aggressively.
Unlike the Smart ForTwo Electric Drive, the AMG SLS E-Cell has the credentials needed to make it onto the bedroom walls of future gear-heads worldwide, but at an estimated price of over $307,000 it won't be found in many garages.

If you have the cash and want one however, you'll have to wait until 2013. And have somewhere to park with room to open those huge gull-wing doors.

In the meantime, for the German speakers among you there's a video of the Auto Bild test drive here. Those without fluent German may still enjoy the video, which at one point refers to the car as being like Star Trek.