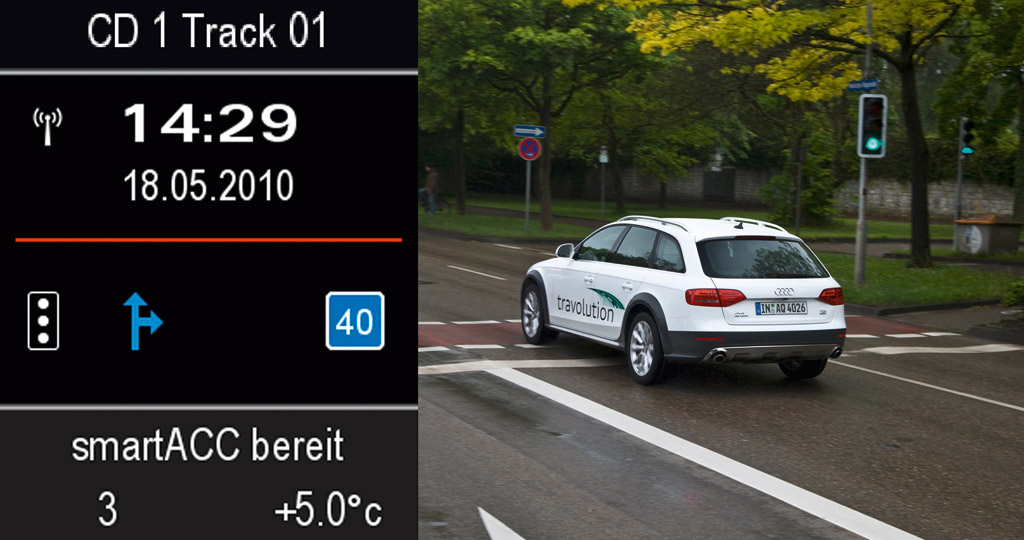 Most automakers are focusing their efforts solely on reducing tailpipe emissions of their vehicle lineups through conventional methods such as more efficient engines, advanced catalysts and lighter cars. Attacking vehicle emissions from a different angle, Audi is developing a new traffic management system it has designed with several partners to its arsenal. Called Travolution, the system promises to improve traffic flow and thereby reduce time spent idling uselessly, improving emissions.

Using modeling and optimization in the network-wide control of traffic lights, as well as an advanced communication system between traffic lights and intelligent cars, Audi Travolution exploits a potential for improving traffic flows that has previously gone untapped.

Travolution essentially alerts drivers via an electronic communication device when a light is due to turn green, and calculates the speed that should be maintained in order to pass through in the green phase, thus eliminating the need to stop.

The results obtained during previous trials back in 2006 were significant--reducing waiting times at traffic lights cut fuel consumption by 17 percent. The first generation system basically relied on the traffic lights only to communicate information but now Travolution allows vehicles to communicate directly with traffic light systems, using wireless LAN and UMTS links.

The fuel saving potential is enormous, with Audi claiming that as much as 0.005 gallons of fuel can be saved by a car at every traffic-light stop and subsequent acceleration phase that can be avoided. A trial of the latest system is taking place near Audi’s headquarters in Ingolstadt, Germany this week.