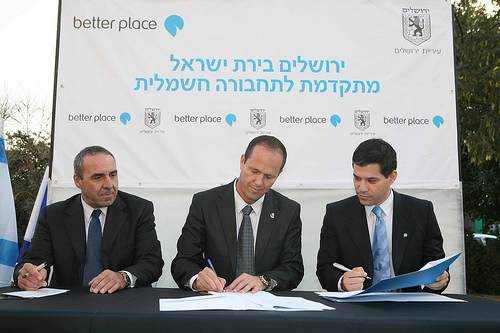 Better Place Israel signed an agreement with Israel's capital city of Jerusalem on Thursday, to install electric vehicle charging infrastructure throughout the municipality. The initiative will test charging stations and battery swapping facilities over the next 18 months. Charging stations will be located on major streets and other public properties including a park, a parking lot and a museum.

20 charging stations have already been installed near the city's central post office and some additional stations have been located at the city's entrance. All told, Better Place will provide 100 stations for Jerusalem's use.

"The Jerusalem of the present is not only a city with a grand past, but a city that looks toward the future. [It's] A city that encourages innovation and excellence, and will constantly seek to improve the life of its residents," said Jerusalem's mayor Nir Barkat. "Electric transportation presents the promise of reducing air pollution and preserving the capital for future generations, while contributing to the reduction of the country’s dependence on oil."

See the press release in its entirety below.

Jerusalem (Oct 22, 2009) -- Today, Better Place Israel signed an agreement with Jerusalem Mayor, Nir Barkat to begin the deployment of a charging infrastructure for electrical cars in Jerusalem. The ceremony was held at the entrance to the city, not far from the Chords Bridge, and was attended by mayors from around the world. Several charge spots have already been placed at the entrance to the city as part of the pilot that will take place next year.

According to the agreement, the infrastructure will be deployed first on major city streets and public sites such as: Safra Square, Herzel Museum, Yad VaShem parking lot, Independence Park and others. Better Place has already begun installing several charging spots throughout the city including near the central post office where 20 charging spots have been installed. A total of 100 charge spots will be deployed during this initial stage.

"The shift to green transportation will guarantee that Jerusalem continues to enjoy clear mountain air for the future generations as well," said Nir Barkat, Mayor of Jerusalem.

"Governments around the world are taking action towards building a national framework for sustainable transportation,” said Shai Agassi, Founder and CEO of Better Place. “Today Jerusalem cements Israel’s position as a leader in the road to sustainable mobility.”

"The charging infrastructures that will be deployed in Jerusalem, will provide a cleaner, safer driving experience for Jerusalem residents and the thousands of people who visit the city every day," said Moshe Kaplinsky, CEO of Better Place Israel.

In recent weeks, Better Place and the Jerusalem Municipality began a dialogue to plan the deployment of a charging infrastructure in the city that offers drivers of electric cars the most convenient experience possible. Over the next 18 months, Better Place and the city of Jerusalem will conduct a comprehensive test of the charging infrastructure, including charging spots, battery switch stations, and the energy management system.

Jerusalem Mayor, Nir Barkat said today, “The Jerusalem of the present is not only a city with a grand past, but a city that looks toward the future. A city that encourages innovation and excellence, and will constantly seek to improve the life of its residents. Electric transportation presents the promise of reducing air pollution and preserving the capital for future generations, while contributing to the reduction of the country’s dependence on oil.”

CEO, Better Place Israel, Maj. Gen. (ret.) Moshe Kaplinsky said today, "By joining the vision of sustainable transportation, Jerusalem sends an important message to the rest of the world. The move to electric cars and the deployment of charging infrastructure will guarantee the residents of Jerusalem a clean and safe environment every day.”

Founder and CEO, Better Place, Shai Agassi added “Jerusalem, like other world capitals, is taking strong action to reduce urban air pollution and to prepare the city for a sustainable future.”