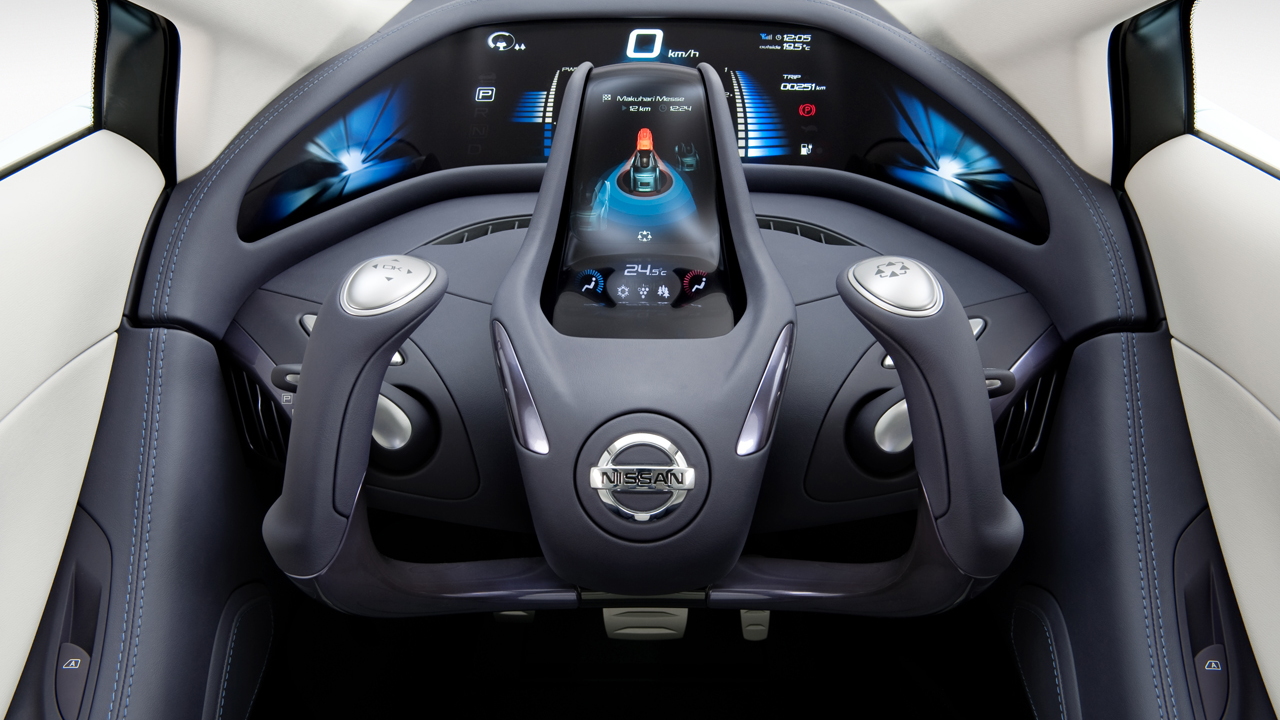 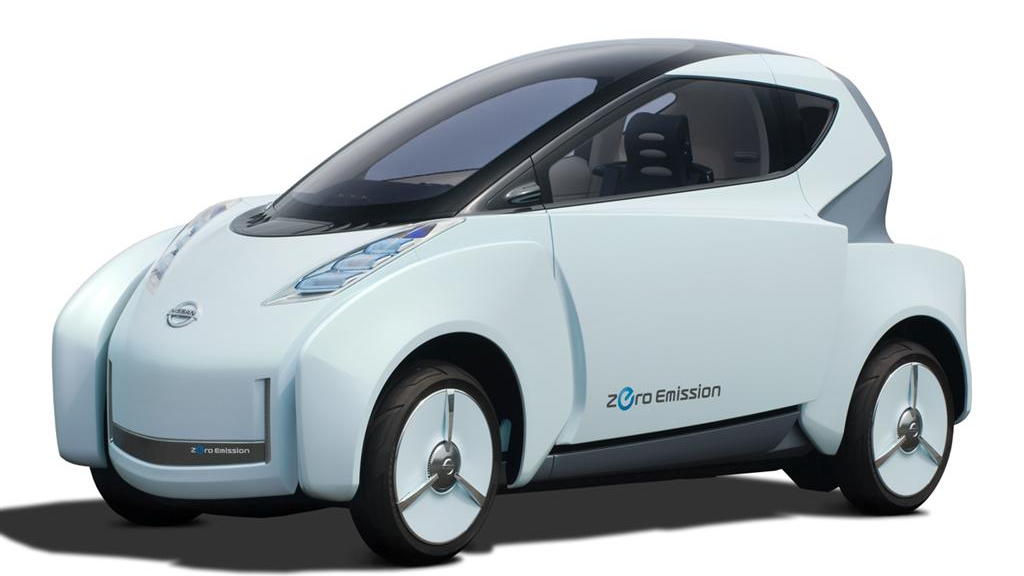 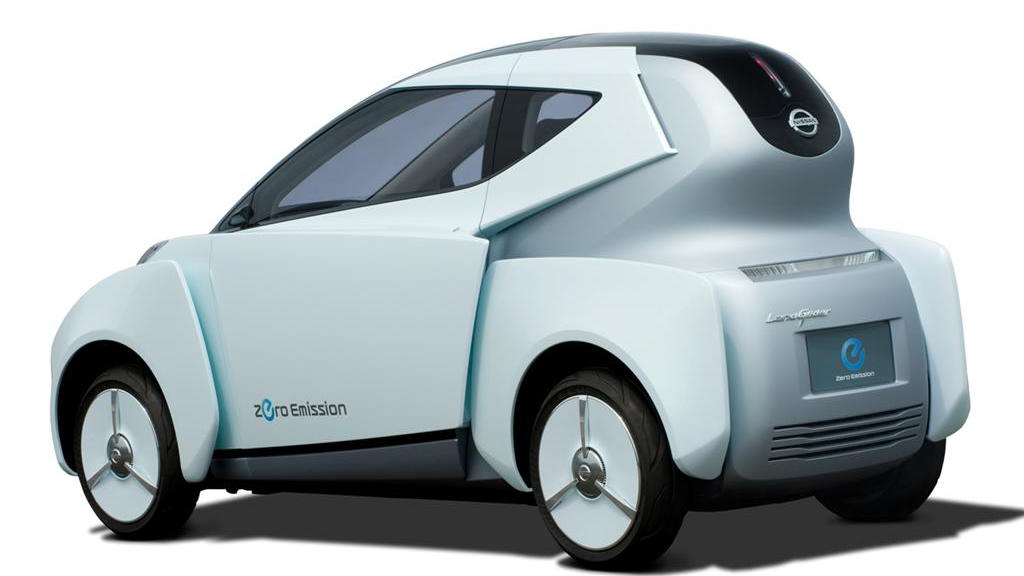 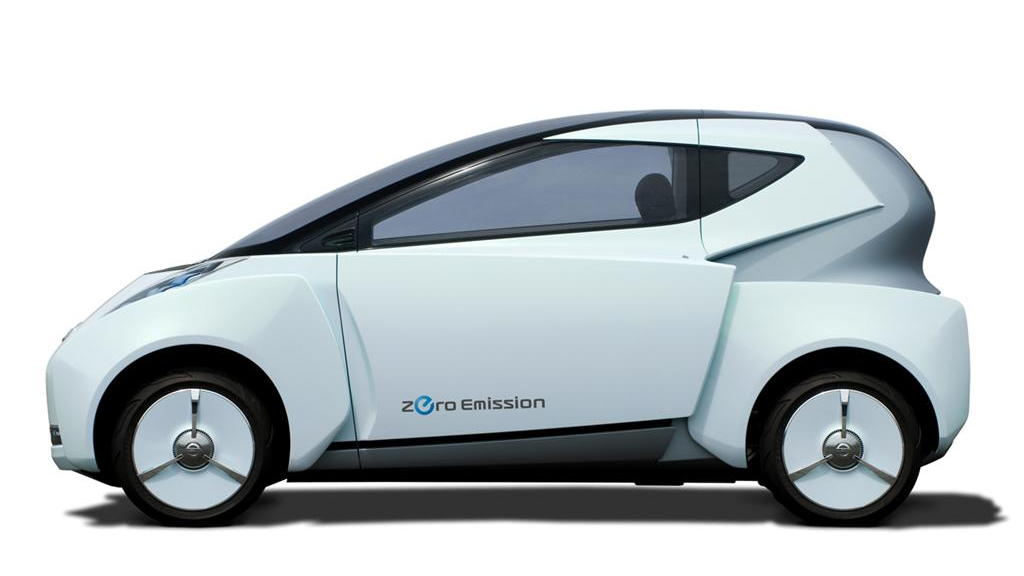 Later this month, Nissan Motor Co. will unveil its two seat electric Land Glider at the Tokyo Motor Show.  Not content with the Leaf as their only EV, Nissan is hoping to take the lead in the EV category over rivals Honda and Toyota.

The Land Glider is a two seater targeted at urban dwellers.  It measures in at 3.1 meters long and 1.1 meters wide and is designed to handle the roads in a manner similar to motorcycles by leaning up to 17 degrees while negotiating turns.

The vehicles trim dimensions and tight turning ability make it easy to maneuver and park in congested city areas.

The interior of the Land Glider is set up to position the driver front and center within the vehicle.  The driving is done via a steering wheel that looks like two joysticks, but the actual steering inputs are controlled through a drive by wire system.

The unique ability of this vehicle to lean through the turns could lead to some driving excitement.  This system has been attempted in the past, but Nissan believes they have perfected it for street use in the Land Glider.

Look for the Land Glider at the Tokyo Motor Show later this month with updates about this new Nissan offering after the show begins.

HIGHLIGHTS OF THE NISSAN EXHIBIT AT THE 2009 TOKYO MOTOR SHOW

YOKOHAMA (October 8, 2009) - Nissan Motor Co., Ltd, will present various show cars at the upcoming 2009 Tokyo Motor Show, including 'Leaf', an electric vehicle (EV) which is slated for global launch and volume production in late 2010, 'Land Glider', an EV concept car, and 'Qazana', which is an entirely new type of compact sport crossover, which made its world debut at the Geneva Motor Show in March 2009. Nissan will also showcase the new mini MPV "Roox", to be launched later this year.

Nissan's ultimate goal in the environmental field is zero-emission. With its aim to be a leader in this field, the Nissan exhibits will focus on concept cars including 'Leaf' and on the development of related technologies and battery-charging infrastructure, in an effort to communicate the company's commitment to consumers.

Nissan is also continuing to work on the internal combustion engine (ICE) technology, for the development of environment-friendly technology to improve fuel economy and reduce gas emission. In addition to EV, the Nissan exhibit will feature a wide range of models and technologies such as hybrid electric vehicle (HEV), clean diesel technology and next-generation X-TRONIC CVT.
Leaf

Overview of major concept cars and technologies to be exhibited are as follows.

* High-performance, zero-emission power train and platform take the 'joy of driving' to another dimension.
* A design that evokes a clean and intelligent image and a body that achieves optimal aerodynamics and wind noise characteristics are packaged into this innovative and original five-passenger, five-door hatchback.
* Has a range of more than 160km (100 miles) on one full charge, which is sufficient for most daily needs.
* Features an advanced IT system that is specially designed for zero-emission mobility. Navigation screen supports the driver by displaying range autonomy areas and battery-charging spots with a touch of a button.

* The Land Glider has a potential to become a new means of transportation in urban areas; its linear acceleration and the narrow body, which only an ultra-compact, ultra-lightweight EV can achieve, will help reduce traffic congestion and promote effective use of parking space.
* Shift of the centre of gravity by leaning provides a new, exciting sense of driving and a powerful, crisp ride.