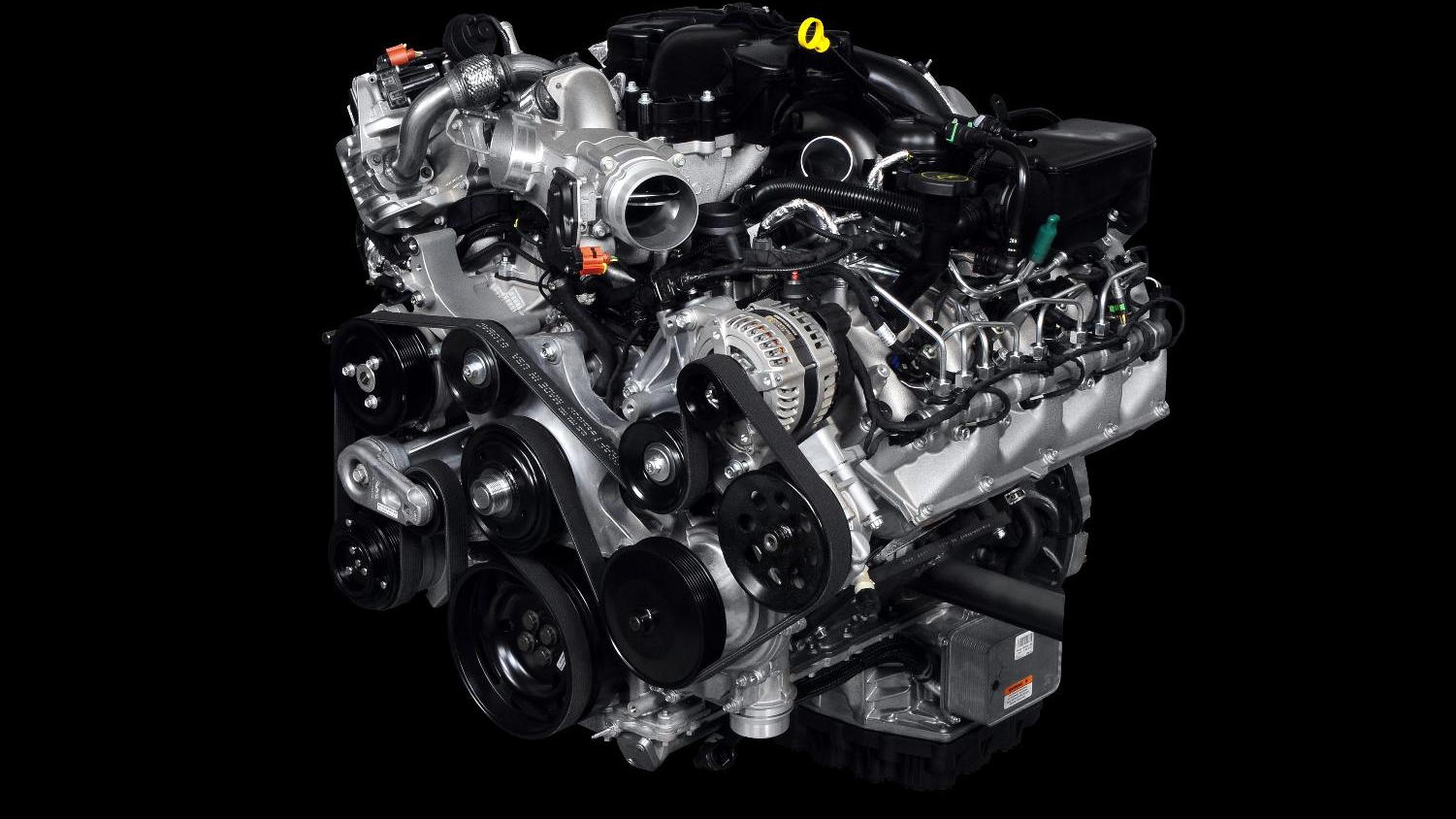 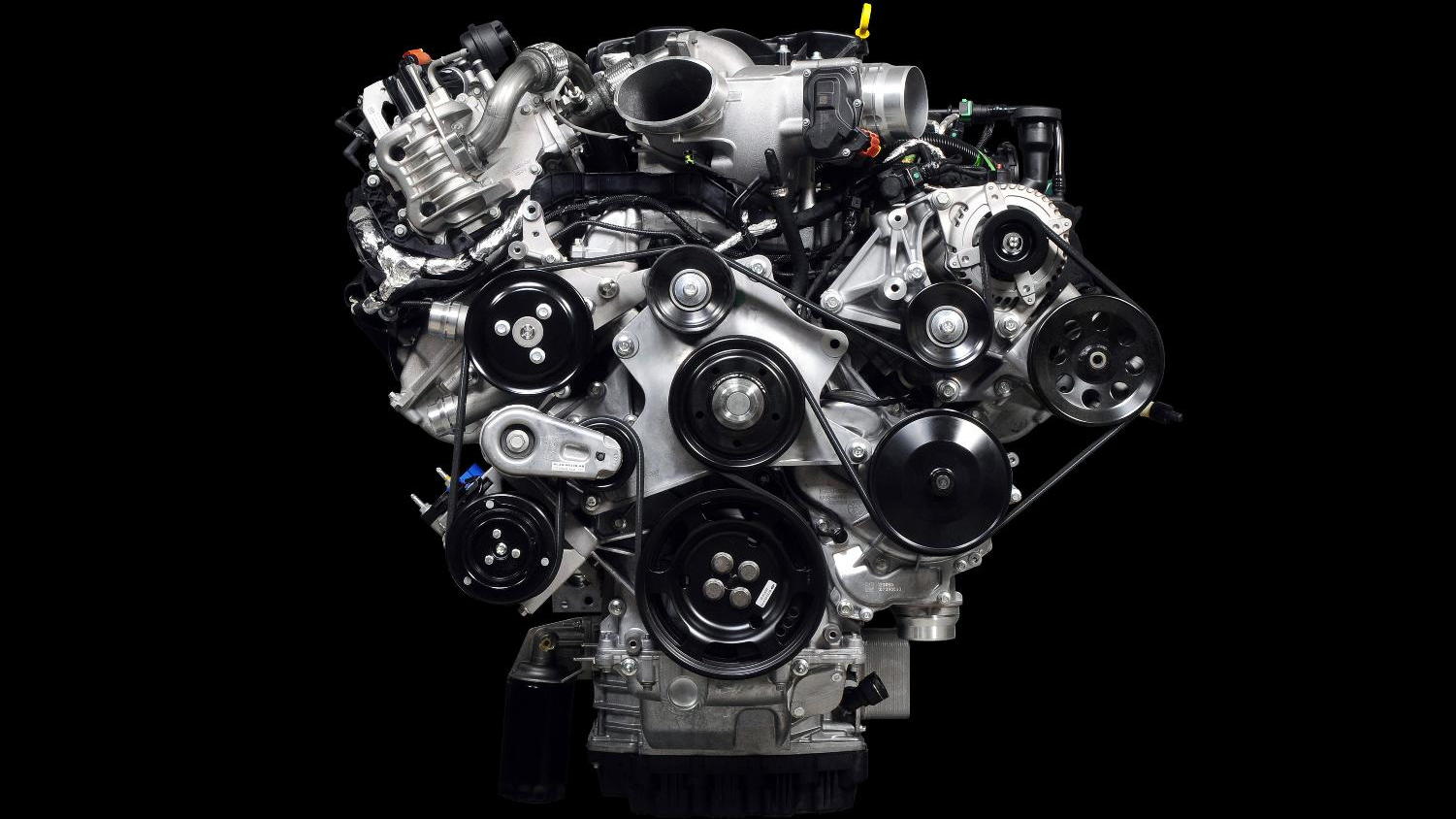 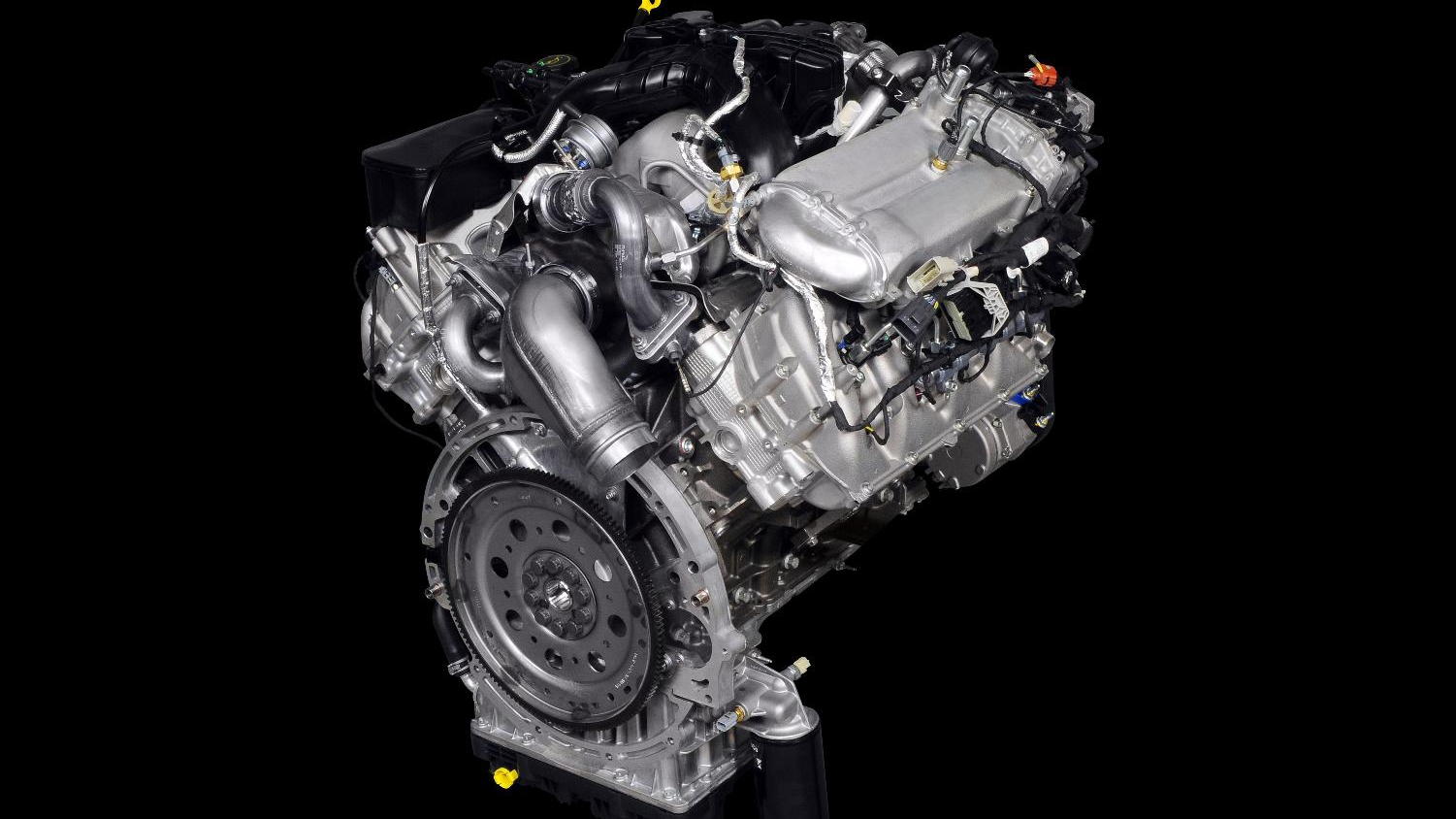 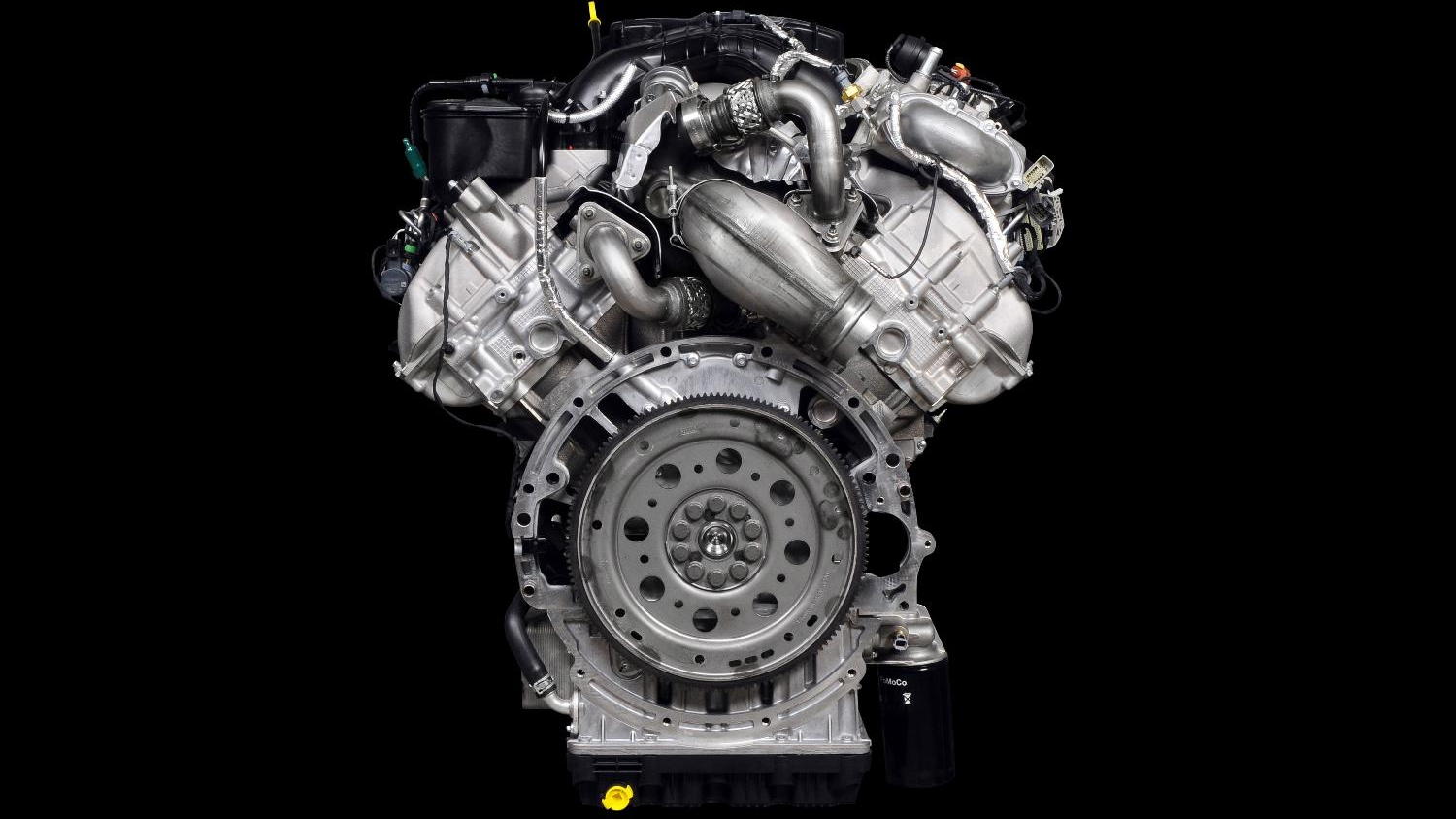 Ford's been around a long time; it just celebrated the 100th birthday of its Model T. Much of its green news these days focuses on its upcoming 2011 Ford Fiesta subcompact, the well-received new 2010 Ford Fusion Hybrid sedan, and its Escape Hybrid sport utility.

But Ford had never designed and built its own diesel engine for the pickup trucks that still make it big money. Various Power Stroke diesel V8s, offered in Ford pickups since 1982, all came from International.

Ford calls the 6.7-liter Power Stroke diesel the most powerful, the most fuel-efficient, and the most refined diesel it has ever offered. The suitably "Ford Tough" code name for the project: Scorpion.

So far, Ford has released neither prices nor power ratings for the new 6.7-liter turbodiesel. Fuel economy ratings are also missing. And the transmissions it will offer aren't specified, though it did say it will no longer offer a manual option with its 2011 diesels.

Still, Ford has designed the new Power Stroke to run on fuel that contains up to 20 percent biodiesel, the mixture known as B20. That means the engine is also downward compatible with lesser blends: B15, B10, and B5.

Perhaps most impressive of all, the new engine fits within the same envelope as earlier Power Stroke diesels, meaning Ford did not have to make any structural changes to its Super Duty line of large pickups and other trucks to accommodate its latest Power Stroke.

According to Ford executive vice president Mark Fields, the new engine will be restricted at launch to the F-250 and larger pickup trucks.  "We had one all planned and engineered for the F-150," he told us recently, "but that's on ice right now."

Ford had offered various diesel V8s in its larger pickup trucks since 1982, under the Power Stroke name. All were built by International, now owned by Navistar. But the recent 6.0-liter Power Stroke, launched for 2003, was nothing short of a disaster.

Repair and replacement claims were through the roof from the start, and Ford and International ended up in a messy legal battle over the warranty costs of fixing literally thousands of engines.

With emissions standards set to tighten on January 1, 2010, Ford decided to design its own diesel from a clean sheet of paper. The new regulations cut nitrous oxide emission limits by 90 percent from today's limits, and by 96 percent over those of 15 years ago.

Diesel engines, in which a fuel-air mixture combusts spontaneously under much higher compression ratios than in gasoline engines, are known for their fuel efficiency. They convert about 35 percent of the fuel energy into torque, versus perhaps 25 percent for gas engines.

But they have two Achilles' Heels: nitrous oxide (NOx) emissions and particulates, the fine particles of soot that you see pouring from the tailpipe of badly-tuned vans, pickups, and garbage trucks.

To solve these problems simultaneously took some radical rethinking. Ford ended up flipping the entire design of the engine around.

Ford already knew it would use a turbocharger to scavenge wasted heat from the exhaust and use it to pump more air into each combustion cycle. That allowed it to add more fuel, increasing the power from each stroke. Almost all clean diesels are turbocharged.

Eureka! Let's flip it around!

The innovation came in where the turbo was mounted: in the engine's vee, between the two banks of cylinders. This reduces the distance the exhaust gases must travel through the exhaust manifolds from each bank before they reach the turbo, meaning more heat can be scavenged for more power.

But that requires that the airflow in the engine be flipped completely round, with intake manifolds on the outside and the exhaust exiting toward the engine's vee. And that meant designing a brand-new engine from scratch. Which is exactly what Ford has done.

Ford is not the only maker to design a diesel with its airflow reversed. General Motors used the same approach for its now-shelved new 4.5-liter Duramax diesel. That GM engine may still reappear in the future, but for now, Ford has exclusive bragging rights.

The turbocharger itself was a custom design with Garrett, replacing the twin turbos used on earlier Power Stroke turbodiesels. The new design uses a single turbine--that's the part driven by the exhaust gases--with variable vanes, driving two back-to-back compressors. Ford calls it a "single sequential turbo."

For a sense of how tough the turbo has to be, consider that it produces up to 30 pounds per square inch of boost while running at speeds well in excess of 100,000 revolutions per minute.

Among the alphabet soup of modern emissions control techniques, Ford knew it would use exhaust-gas recirculation (EGR), which feeds some of the exhaust back into the cylinder to be burned again. This lowers the temperatures inside the cylinder, and reduces formation of NOx.

Ford's innovation in the new Power Stroke EGR system was to take the exhaust gas it recirculates only from a single bank of the V8 engine, which makes the plumbing and piping far less complex.

It continues on to a selective catalytic reduction (SCR) system, used for the first time in a Ford diesel, that injects a urea solution into the exhaust gases. Their heat converts the urea into ammonia, which chemically converts the NOx into nitrogen and water vapor in its own, dedicated catalytic converter.

The SCR concept was pioneered by Mercedes-Benz for its passenger-car diesels, under the name BlueTec. In cars, the urea solution is refilled by the dealer at every 12,000-mile service; for Ford trucks, some owners may have to add it themselves based on usage.

Finally, the remaining exhaust passes through a diesel particulate filter (DPF) that traps any remaining soot. The accumulated particulates are periodically burned once the trap has filled.