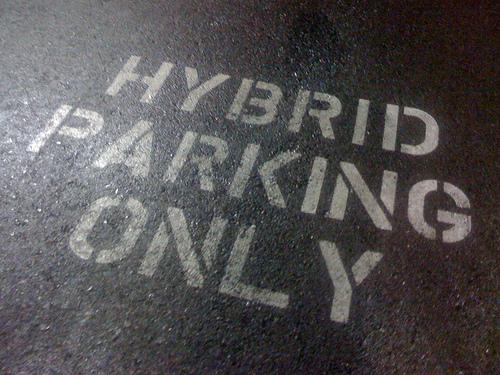 There's been a fair amount of grumbling about so-called "Prius perks," including parking spaces set aside for hybrid vehicles at Ikea, Whole Foods, and other retailers.

In fact, the spaces--although designated "hybrid"--are more properly allocated to any alternative-fuel vehicle. That includes electric cars, natural-gas vehicles like the 2009 Honda Civic GX, perhaps even one of the world's several hundred hydrogen fuel-cell vehicles.

Priority parking is one of an array of measures that helps a building achieve the US Building Council's LEED certification, indicating it's a green building. "It's a very popular practice," spokesperson Ashley Katz told The New York Times.

Perhaps the best-known "Prius perk" is the highly coveted permit allowing owners of specific hybrids to drive in California's HOV lanes even with only a single person in the car. Qualifying vehicles are the Toyota Prius, Honda Civic Hybrid, and 2000-2006 Honda Insight.

Other regions, including New York State and the Port Authority of New York and New Jersey, give those same three vehicles breaks on bridge and highway tolls.

Other incentives and tax breaks encourage the purchase of fuel-efficient hybrids as well. In New Mexico, for example, a one-time exemption from the state's 3 percent vehicle excise tax scheduled to expire at the end of June has now been extended into 2012.

The tax break applies to anyone in New Mexico who buys a new hybrid vehicle with a fuel economy rating of 27.5 miles per gallon or better. Roughly 2,500 buyers used the exemption during 2008; it does not apply to purchases of used hybrids, however.

In the Washington, DC, area, Virginia lets certain hybrid drivers (with special Virginia license plates) use its high-occupancy vehicle lanes even if they are driving alone. Another such perk, free parking in the city of Los Angeles, ended on March 1 for budgetary reasons.

But breaks for hybrid owners may be the past. If Oregon is any guide, the future lies in encouraging electric cars. Since 1999, Oregon has offered a $1,500 tax credit to buyers of hybrid cars, and more than 11,000 buyers have taken advantage of it.

But a new bill passed by the Oregon House of Representatives will end the hybrid credit on January 1, 2010, replacing it with a similar credit for owners of plug-in vehicles.

This mirrors US tax credits for hybrid vehicles, which were capped at 60,000 vehicles per manufacturer. Hybrids from Toyota, Honda, and Ford no longer qualify, since 60,000 owners of those vehicles have used the credits. (Buyers of hybrids from Nissan and General Motors are still eligible.)

A similar program in Ontario, Canada, offers incentives of C$4,000 to C$10,000 to buyers of plug-in vehicles, starting next July. They'll also get special green license plates allowing them to use high-occupancy vehicle lanes.

So enjoy your hybrid perks while you have 'em, folks. The future of tax credits and other green-car incentives is all about electric. 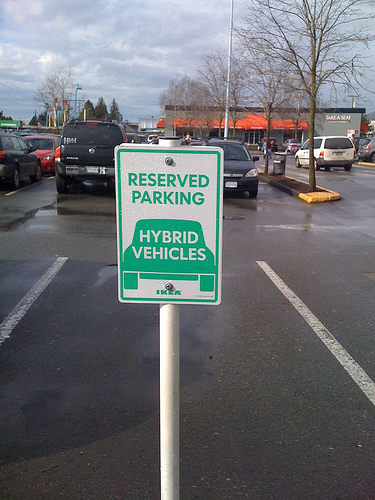