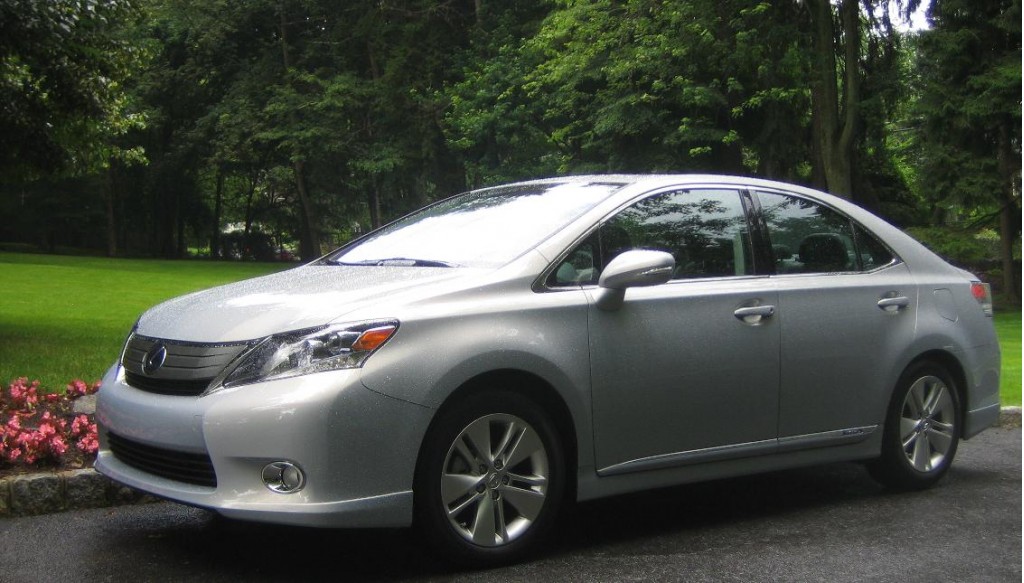 When we first drove the 2010 Lexus HS250h, we were puzzled by it. Neither fish nor fowl, it seemed an uneasy marriage of Lexus lines and luxury with a Toyota Prius-like dedicated hybrid shape and powertrain.

We've just spent a four-day weekend with a glossy black 2010 HS250h, the Premium model with all the goodies. And now that we've spent more time with the car, we find we've warmed up to it. (For reasons we won't go into, our photos didn't come out. Sorry.)

The HS250h is a definite departure for Lexus, and a car you have to take on its own terms--just like the 2010 Toyota Prius with which it shares not only some mechanicals, but a design philosophy.

We think the styling is the least elegant of any Lexus sedan, but in black, it attracted a lot of attention on the street. Parked in Manhattan, it regularly turned heads. The consensus? Good-looking, and good for Lexus for making such a small car.

It's not actually that short (its 185-inch length is only 6 inches shorter than the 2010 Lexus ES350), but it's tall and slab-sided, so visually the 2010 Lexus HS250h appears much smaller. Maybe only in New York City is that a good thing.

Neither of two styling comparisons offered by onlookers will make Lexus happy. One was the 1979-83 Toyota Corolla Sport Coupe, the other was the 2009 Toyota Yaris sedan. On the other hand, those cars were positively viewed by our commenters. Go figure.

We remain on the fence about its styling. But both urban and rural residents seemed impressed by the looks of the 2010 Lexus HS250h. To our surprise, it seems to have street presence. Score one for Lexus. 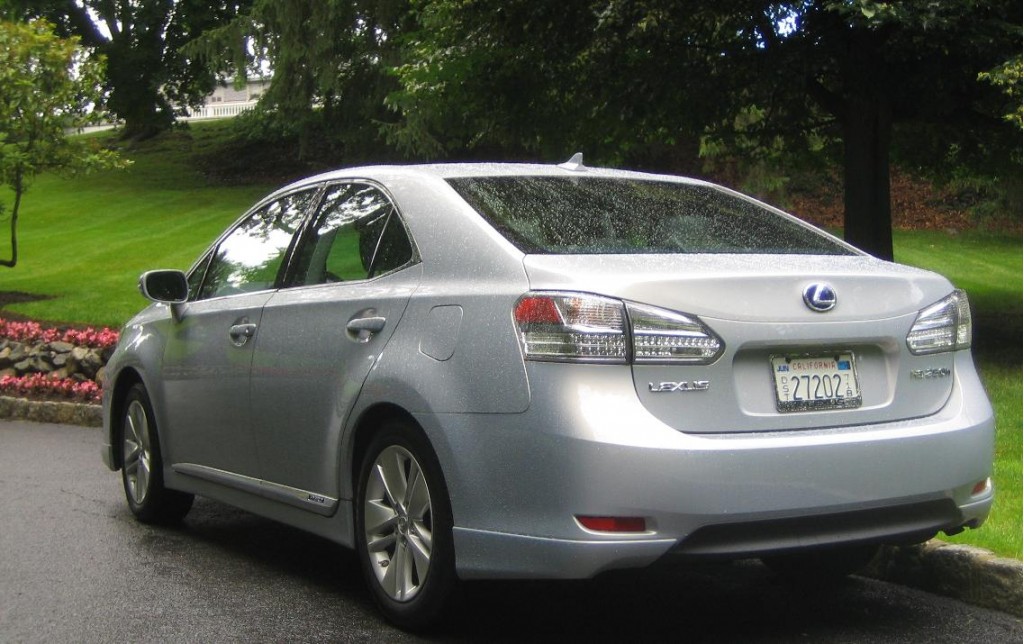 Not surprisingly, the HS feels somewhat like a Prius. A very, very well-insulated, beautifully equipped Prius, mind you, but a Prius nonetheless.

From the dash-mounted shift stalk (just "D" and "R" plus a "B" mode for extra engine braking) to the characteristic hybrid disconnect between engine noise and road speed, Prius owners will know right away how to drive the Lexus HS250h and make the most of it.

Its handling is hardly on a par with the sportier side of the Lexus line, and while it holds the road decently, the electric steering and regenerative brakes are number than the norm.

The road roar and crashing from the optional 18-inch tires, which we complained about on our earlier drive, was almost entirely absent. It recurred a few times on particularly rough surfaces, so we're left to wonder if that route just had lots of lousy asphalt.

Because the car is so well-insulated--and a staggering 600 pounds heavier than the 2010 Toyota Prius--it gathers speed deliberately, somewhat like an ocean liner.

That heft means it's virtually impossible to keep the HS250h in the "Eco" operating band when accelerating away from a stop. We did it a couple of times, but we feared for our lives from angry following traffic. And the "Eco" button? Only if you're alone on the roads.

If you really floor it, the Hybrid Synergy Drive delivers enough power to get you out of trouble. To do it, the engine noise quickly rises to a muffled howl and stays there until you let up. 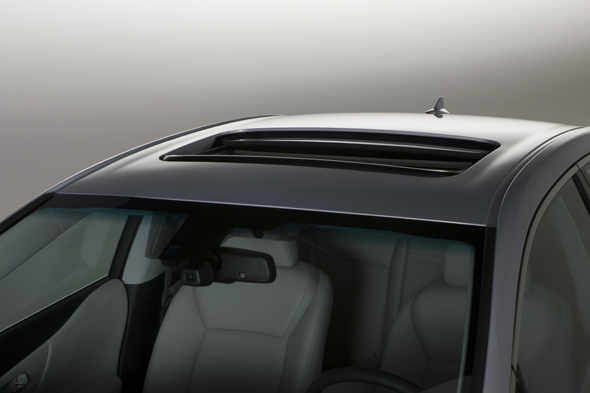 We put more than 500 miles on our 2010 Lexus HS250h, covering interstate highways, two-lane parkways, rural roads, and stop-and-go city traffic. And we kept the air conditioning going most of the time, given the hot sun beating down on our black car.

That left us with a quarter of the gas tank remaining, meaning your bladder will give out before the gasoline does. But despite that, the mileage wasn't stellar.

In our earlier test (where we hardly used air conditioning at all), we achieved 32.9 mpg after a short 10-mile trip and 36.1 mpg after a longer drive that included freeways and local roads, many of them hilly.

But over this longer test, we only managed 29.2 miles per gallon over that distance. Our last 120-mile leg, mostly on freeways,  was better--at 33.1 mpg--but both numbers are below the EPA blended rating of 35 miles per gallon for the 2010 Lexus HS250h.

On the other hand, over 100 miles, the different between 29 and 35 mpg is less than sixth-tenths of a gallon of gasoline, so the amount we sacrificed is still pretty small. (Blame the confusing and non-linear MPG scale for that one.) 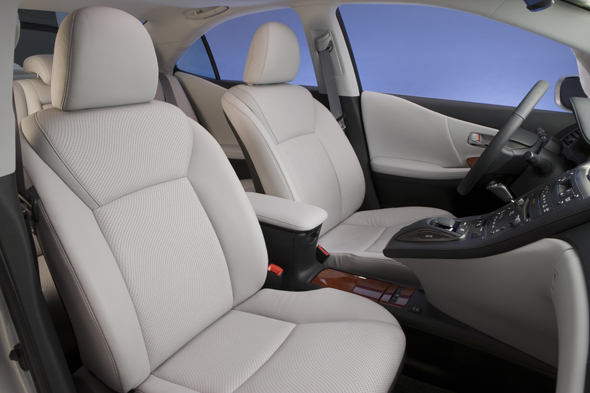 It's inside that the HS truly shines. Our test car's beautiful chocolate brown and cream two-tone color scheme soothed us every time we sat down, though we noticed the start of some smudging by the second day. We suggest either regular detailing or wearing gloves.

Opionions differed on the projecting center console. Some felt it worked better than the full-length iteration in the 2010 Toyota Prius, while others grumbled about its "great white shark" looks. That's one you'll have to decide for yourself.

The heated and cooled front leather seats were delightful. We're not really sure we need our nether regions cooled to that degree (e.g. VERY COLD), but it was nice to know we, ummmm, could.

The thumb switch on the steering wheel, for toggling through the instrument panel screens, became second nature almost instantly. And the controller, with a pointer and mouse-like button, worked well, including selective haptic feedback for clicking through lists.

One gripe: We routinely whacked our left shin on the hanging emergency-brake pedal when moving on and off the dead pedal at the left of the footwell. Please, Lexus, dump this 1978 Buick relic and just reprogram the parking-brake switch (below the shifter) instead! 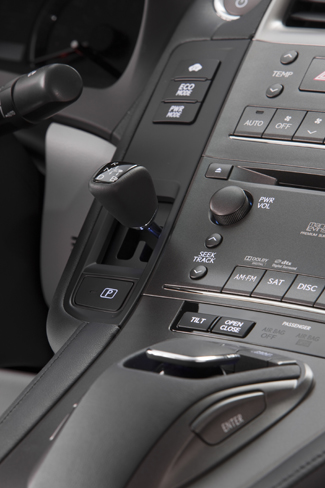 We couldn't possibly cover every one of the many luxury features in the newest Lexus; there are a lot of them, more than even the Interwebs have room for. So these are our thoughts on the ones we used most often, or remarked about with wonder--or annoyance.

Mark Levinson sound system: Wonderfully good across a wide range of music: crisp, clean, and faithful, at least to our ears. Not to mention powerful enough to rattle change in the cupholder at not-very-high volumes.

iPod integration: Close, but no cigar due to one irritating feature: The system kept changing songs while we used the console controller to scroll through playlists.

Heads-Up Display: Projecting the road speed, radio tuning, and route information into the driver's line of vision worked well. The heads-up display was a little low for a 6-foot driver at its highest setting, though, so we sometimes forgot it was there.

We would have liked to show the power-split diagram as well, so drivers could maximize mileage without constantly glancing down at the dashboard. We also wanted a way to stop a change in the satellite-radio channel from overriding the current display.

Radar Cruise Control: We've been fans of adaptive cruise control since Mercedes-Benz introduced it a decade ago.  The Lexus system works well, but not quite as well as the Benz design. For one thing, it lets speed soar as much as 5 miles per hour above your setting. Cops love that.

Even moderate traffic, we had to keep it at the closest of three following distances. The radar also sometimes lost cars ahead on winding roads, causing acceleration and then sudden braking as the car came back into range. And it dropped out below 20 miles per hour, whereas Benz keeps its system operating right down to a dead stop, and back up.

Despite these minor glitches, we were happy to have the system on our favorite narrow two-lane parkway, where cops lie in wait as Range Rovers joust with battered Volvo station wagons. 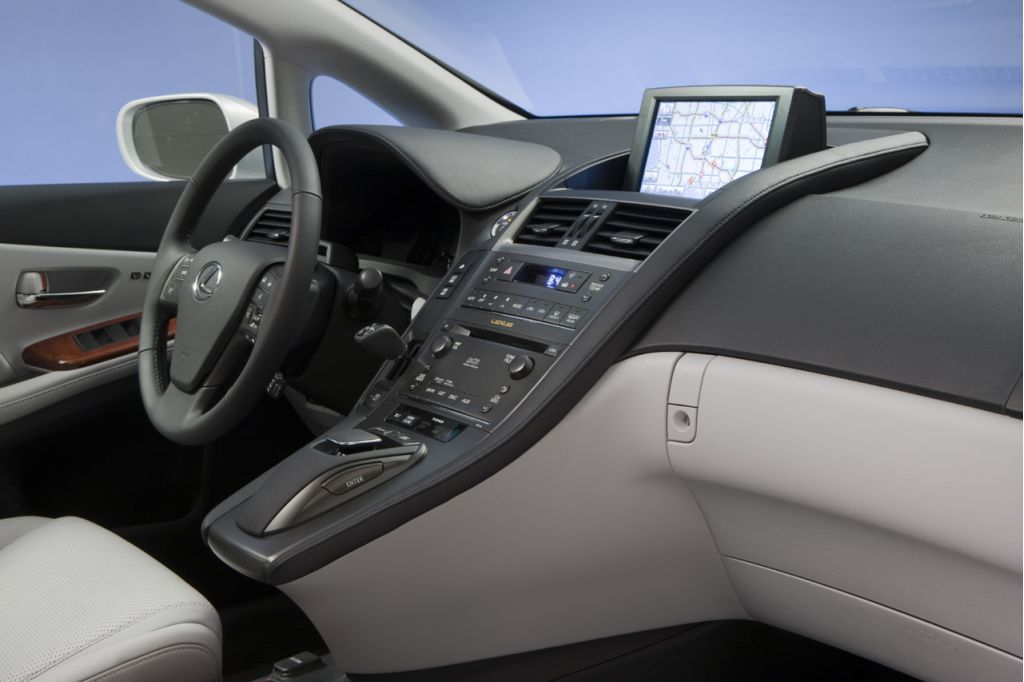 Lane-Keeping Assist: The steering definitely feels stiffer when the optional lane-keeping system is switched on. If you drift onto a lane marker, first it beeps at you, and then it rotates the steering to move you back into your lane.

We only tested it a dozen times or so, but the system seemed to correct a little more sharply than we expected, angling us toward the stripe on the other side of the road.

It's best for long, high-speed routes, especially if you're behind the wheel for a long spell. On the twisty parkway, we mostly kept it off. In narrow lanes, it held us disconcertingly close to the metal divider--though that was the fault of 1940 road designers, not the car.

On a car this luxurious, surely Lexus could fit a second trunk pulldown handle for the left-handed among us? (It's a pet peeve of ours.)

The sunroof was fine, but we'd have liked a German-style mesh interior shade as well as the solid cover. The choice is either glaring sun (despite heavy tinting) or no light at all. Yes, we know: Now we're quibbling. 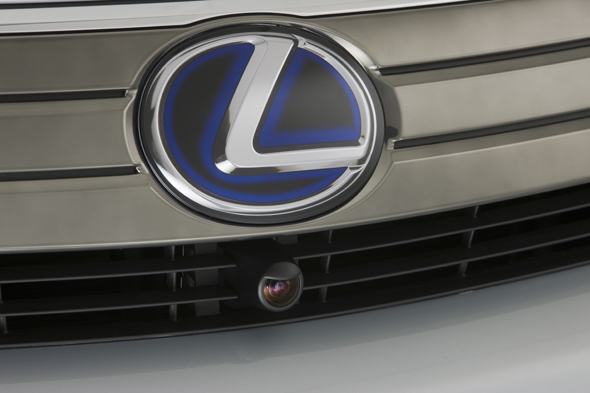 But we warmed up to the HS after not-all-that-favorable first impressions. It's clearly better for long road trips and around-town travel than for hustling around hilly roads.  And the traditional Lexus cosseting is not to be sneezed at; it's very relaxing to drive.

In the end, we think, the 2010 Lexus HS250h has to be viewed as a wildly luxurious Toyota Prius sedan. It's the car you move up to if you're a rabid Prius fanatic but want more leather, more luxury, more sound deadening, and more electronic gadgetry.

It clearly has a market there since, according to one analyst, the Toyota Prius often substitutes for a luxury car. But it's an open question as to whether it will jump-start a brand new segment: the dedicated luxury hybrid sedan.

But if any carmaker can do that, we think Lexus--which single-handedly invented the midsize luxury crossover market in 1998 with its first RX--has a shot at establishing this niche.

So what do you think: Is the 2010 Lexus HS250h a smart move, or a bizarre diversion? Will prescient Lexus executives show up Acura, Infiniti, Cadillac, and even the Germans? Tell us your thoughts.