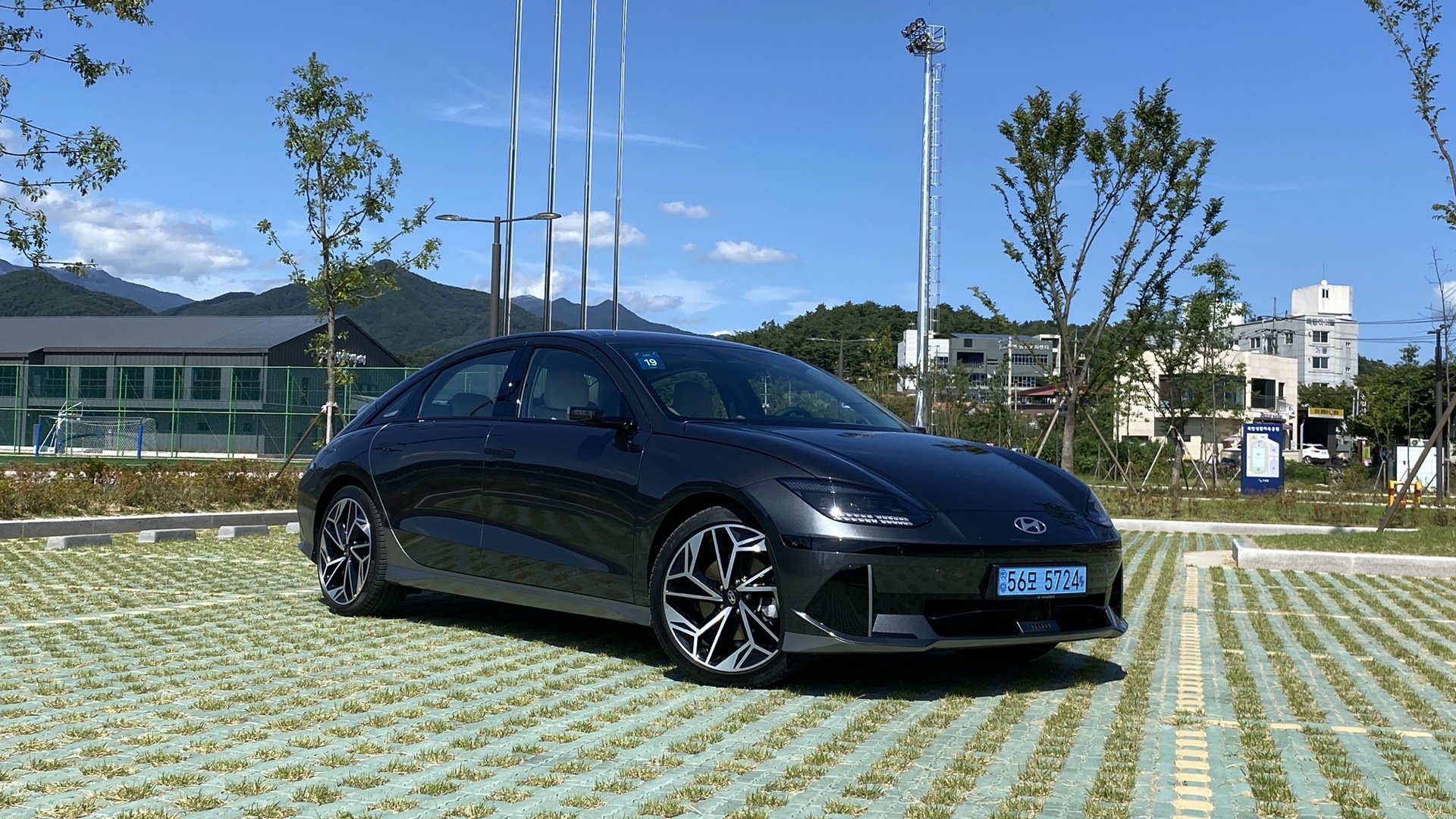 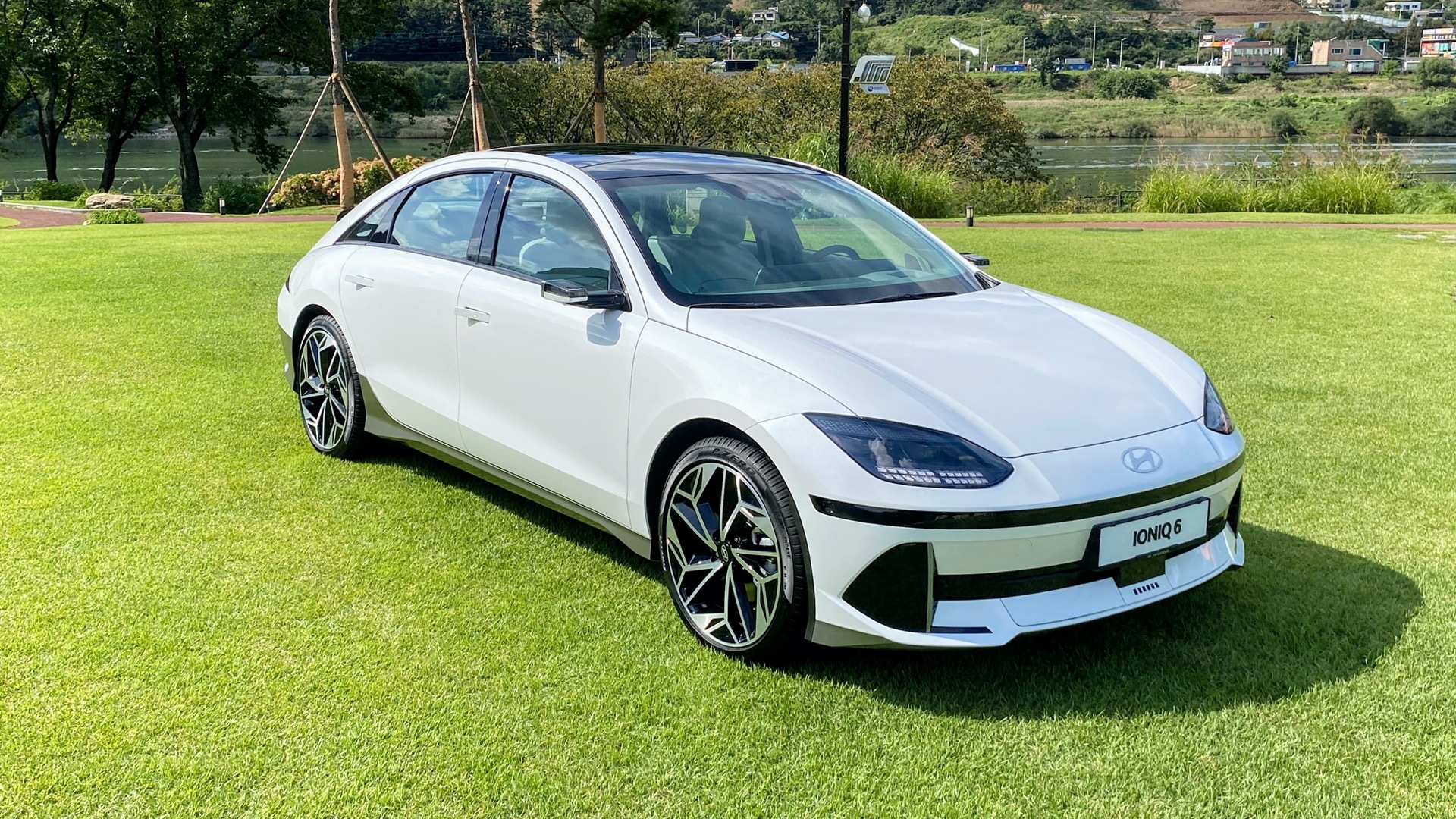 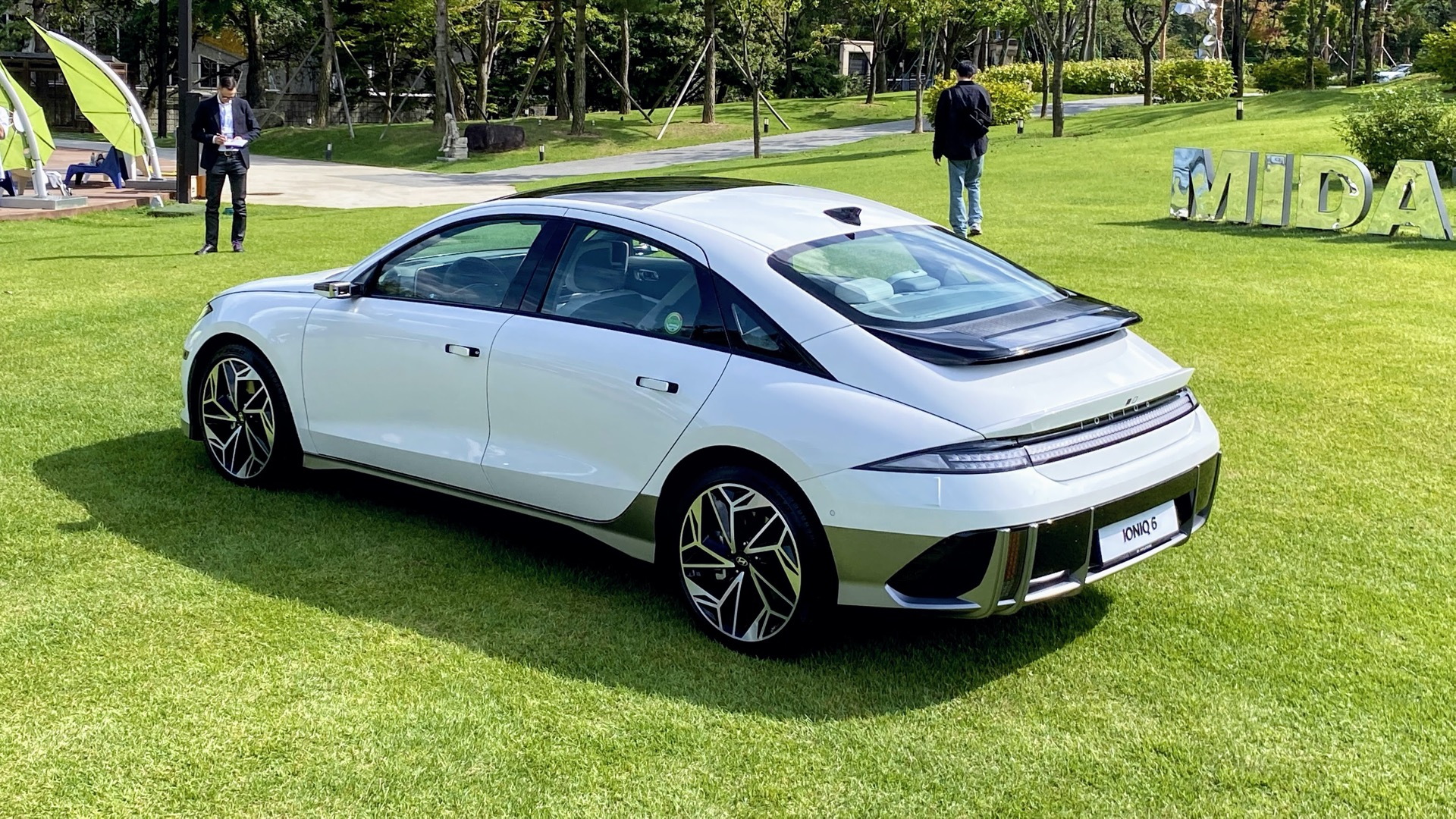 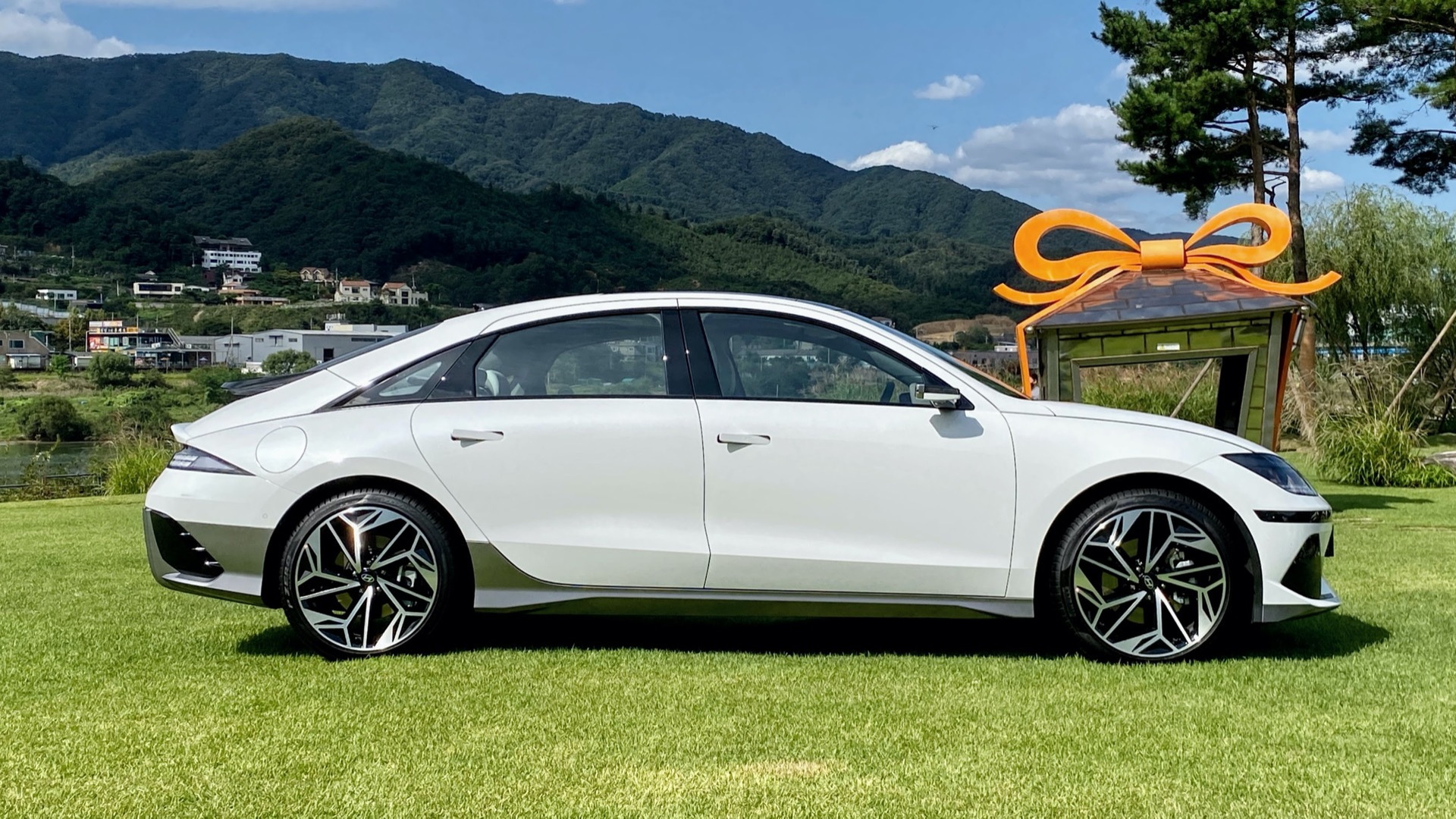 Driving range, the flexibility of over-the-air updates, and the packaging advantages of a dedicated electric vehicle platform have long been advantages of Tesla and its Model 3.

The 2023 Hyundai Ioniq 6 promises to have all that and more, in ways the Ioniq 5 crossover couldn’t quite deliver versus the Model Y. It’s the first of Hyundai’s vehicles that can get over-the-air updates to core vehicle firmware, from delivery. And its 0.21 coefficient of drag beats the Tesla Model 3, as does its top range, of up to 382 miles in the European WLTP cycle.

If it can keep up that performance in pending EPA tests, it may very well dethrone the Model 3 as the most efficient mass-market EV. And that’s before the arrival of a high-performance Ioniq 6 N version in a year or two.

Hyundai didn’t look to match the Model 3 with its Ioniq 6. It didn’t aim to create a flattened, lowered version of the Ioniq 5 either. It has a completely different set of details and, from the outside, you might not even know that they’re related.

The combination of technical prowess and uncompromised design in Ioniq 6, Hyundai global design chief Simon Loasby says, was the result of “an awesome collaboration between our designers and our engineers.” Loasby outlined that multiple challenges along the way resulted in a better, more distinctive sedan.

The Ioniq 6 is one of the sleekest production sedans, and it has the lowest coefficient of drag of any vehicle in Hyundai history, nearly matching the coefficients for the Lucid Air, Mercedes EQS, and Tesla Model S—all cars that have more length, a built-in bonus for aero.

According to the WLTP cycle for range, Hyundai is anticipating a range of 267 miles for the base 53.0-kwh Standard version, spanning up to 382 miles with rear-wheel drive, the larger 77.4-kwh Long Range battery pack, and the smaller 18-inch wheels.

Based on how well Hyundai has done on EPA ratings for the Ioniq 5, relative to WLTP, I’m predicting that will work out to more than a 350-mile range rating for at least one U.S. version—very closely rivaling the 358-mile rating of the Model 3 Long Range.

Sizing up to 20-inchers bumps range down about double the amount of opting for all-wheel drive. Nevertheless, that’s what all the provided early-build cars had, as part of this early drive—and even as such, we saw indications of close to 300 miles of real-world range in this form.

Just like fellow E-GMP models Ioniq 5 and Kia EV6, there were no surprises in terms of state of charge or range remaining during my drive, and as suspected we saw somewhat better efficiency than we would have in an Ioniq 5.

Temperatures were about ideal for modern lithium-ion cells—66 to 81 degrees F during our drive. It consisted of relatively cautious driving through some of the Korean peninsula’s picturesque, green, mountainous countryside—at sub-U.S. speeds, over speed camera concerns—plus plenty of slogging through Seoul traffic. We did get to rapid U.S. freeway speeds for a brief time.

When we climbed into our Ioniq 6 it had a 98% charge and suggested a 283-mile remaining range. Hyundai hadn’t yet cleared accumulated info from the previous 83 miles of driving, which showed 3.3 miles per kwh over more than four hours and what must have included urban stop-and-go. Over the day and its 137 miles, my co-driver and I averaged 3.9 mi/kwh and saw 148 miles of predicted range remaining.

Closer to the road, it’s a different world

That all in check, let me tell you about the drive. It took a couple of modestly banked freeway ramps to already see there’s a key difference in the feel of the whole Ioniq 6 package, compared to the package of the Ioniq 5 crossover. In the Ioniq 5 it feels like you sit on the bulk of the vehicle, whereas in the Ioniq 6 it feels like you’re in the car.

Taking a step back for the moment, the Ioniq 6 bats aside all the styling attributes that are quickly becoming styling cliches for EVs, and it looks like nothing else on the road. You won’t find a boxed-out lower-body area signaling the battery pack from the side, nor will you see a flat-black area in front signaling that there would otherwise be a grille. You very quickly stop trying to qualify the 6 versus other EVs and simply settle into the reality that it’s a very good-looking sedan.

Up close, in person, in modern-car references, the Ioniq 6 conjures instant associations with the Porsche 911 from the rear—and perhaps from the front. The bitmapped look of Hyundai’s parametric pixel theme is all around the car, inside and out, and yet it never feels overwrought—from the base of the headlights, to the space along the centerline of the dash, to the two levels of frosted red bits striped across the rear in back.

In the latter dimension, that means the Ioniq 5 is just 4.1 inches taller overall. With a seat that seems to adjust much lower to get situated, it’s enough to make a big difference in that perceived center of mass and how it fits on a curvy road.

Relatively light but decently weighted steering feel, just the right amount of predictable roll, and a suspension that soaks up pavement harshness give the Ioniq 6 a docile feel. It’s not tuned firmly, but I see where a future N version might go.

The configuration and power numbers may carry over from the Ioniq 5, but Hyundai has introduced a different power module with next-generation semiconductor tech, for more energy conversion efficiency, and its motors employ hairpin winding tech, also for better efficiency. In dual-motor models, Hyundai has also fine-tuned the transition between two- and four-wheel drive. While that’s a transition we could feel in the Ioniq 5 at light accelerator and easygoing highway conditions, it’s not one we ever detected in the Ioniq 6.

In Standard pack versions of the Ioniq 6, the battery pack doesn’t physically go as far back as in Long Range versions, likely helping keep the weight distribution more even and underscoring that between versions, this electric sedan might drive quite differently.

You get four levels of regenerative braking, paddle-selected, plus an Auto mode that seemed to guess well about how much we wanted at various times. There’s also an auto-hold button. Overall, it’s a great interface for finding the right level of accelerator sensitivity and brake regen for your driving style (and passenger). There are Eco, Normal, Sport, and Snow modes, as with the Ioniq 5, but new to the Ioniq 6 is an EV Tune-up feature that allows the owner to tweak more of the settings individually—including steering, acceleration sensitivity, and horsepower.

Familiar ground to charge upon

The Ioniq 6 includes an 11-kw onboard charger that should enable a full charge for Standard versions in about 6 hours or Long Range versions in about 8 hours. Hyundai notes that at the 7 kw that will be more common for home chargers, that’s 8 and 12 hours, respectively. And it comes ready for bidirectional charging.

Just as the Ioniq 5, the Ioniq 6 can charge either of its packs from 10% to 80% in just 18 minutes. A heat pump and battery heating system are now both included and Hyundai says that they help secure “competitive driving distance and charging time in winter.” So will a destination-based preconditioning feature that will help more owners hit peak charge rates when fast-charging.

The Ioniq 6 doesn’t have an exact copy of the 5’s dash or trim or door panels, but it’s all close enough to see a close family resemblance. The steering wheel is the same, except for the new status indicator lights that are integrated into the center hub. Most notably, it lacks the 5’s shelf that extends outward toward the driver’s right hand, although it does have a flat-and-strong center console surface good for laptop work.

One of the biggest surprises just sitting in the Ioniq 6 is that the design actually affords quite good outward vision. The rear pillars are thick, but the back window has a curve to it that allows a more open rearward view of cars in adjacent lanes through the rearview mirror (or when parking, if you just crank your head around).

Front seats are slim and supportive, and we found the perforated synthetic leather upholstery to be soft and grippy. Hyundai claims the Ioniq 6 has more rear leg room and shoulder room than the Polestar 2 or Tesla Model 3, but it doesn’t compare in head room—and that’s really the one limitation of this car. I’m well over 6 feet tall, and while I can sit upright in the Model 3 and, somewhat miraculously, have an inch or two above my head, the top of my noggin was mashed against the headliner when I tried to sit upright. Hunching slightly forward is the hack for shorter trips. In leg room, however, I found enough room to sit behind someone as tall as myself. Think of it as a more than ample space for child seats or any combination of kids, back there, but not the sort of space you’d use for a trip for four adults.

Trunk or frunk, what you get is a bit on the shallow side. The trunk is long and wide and just tall enough for grocery bags, and you could fit a couple of large travel suitcases there on their sides. As for the frunk, it’s handbag territory. Maybe a laptop bag.

On a bright, sunny day we didn’t get a chance to test the cabin’s ambient lighting, which defaults to a shade of red inspired by Seoul at night, or its front-seat mood lighting that gets brighter the higher the speed. Deeper into the gimmicky side, the Ioniq 6’s Active Sound Design claims to make “spaceship-like driving sounds,” in three different levels of intensity—with an odd dissonant warble we experienced in our pre-production car as the sounds momentarily overlapped around 20 mph. I like my EVs silent and just turned it off.

Pivoting to the more useful, the Ioniq 6 will come with Hyundai’s Highway Driving Assist 2, a driver-assist system based on adaptive cruise control, adding lane-change capability on major highways. A remote smart-parking system will also be available. My test car also had the head-up display that overlays just the right amount of info from navigation and traffic prompts—except for the seemingly endless cautions about speed, which must be a South Korean obsession.

Perhaps most importantly, the Ioniq 6 is the first Hyundai to offer over-the-air updates that can update, upgrade, and fine-tune vehicle firmware settings, not just the infotainment system.

Otherwise, Hyundai hasn’t said much about pricing or features for North America. To combine hints from company officials, it may start slightly lower than the Ioniq 5 but top out somewhat higher than the crossover—especially if considering its eventual top-performance Ioniq 6 N version.

Bottom line: Hyundai got this balance between design, engineering, and tech just right, and it’s leading with a sedan like no other that, in efficiency and overall desirability, is going to give the Model 3 the toughest competition yet. Let’s just hope Hyundai figures out faster that a lot of Americans will want to buy them.