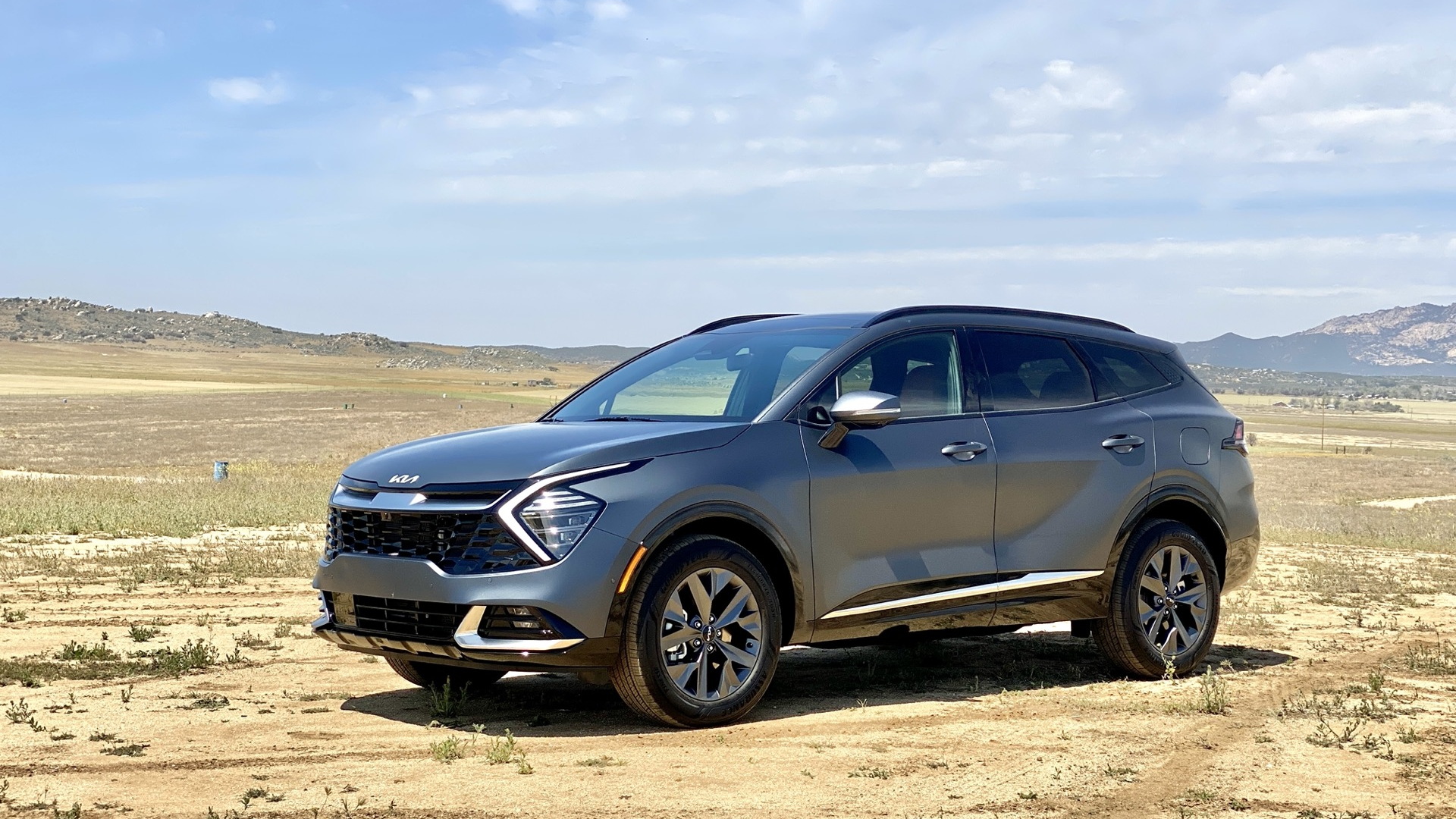 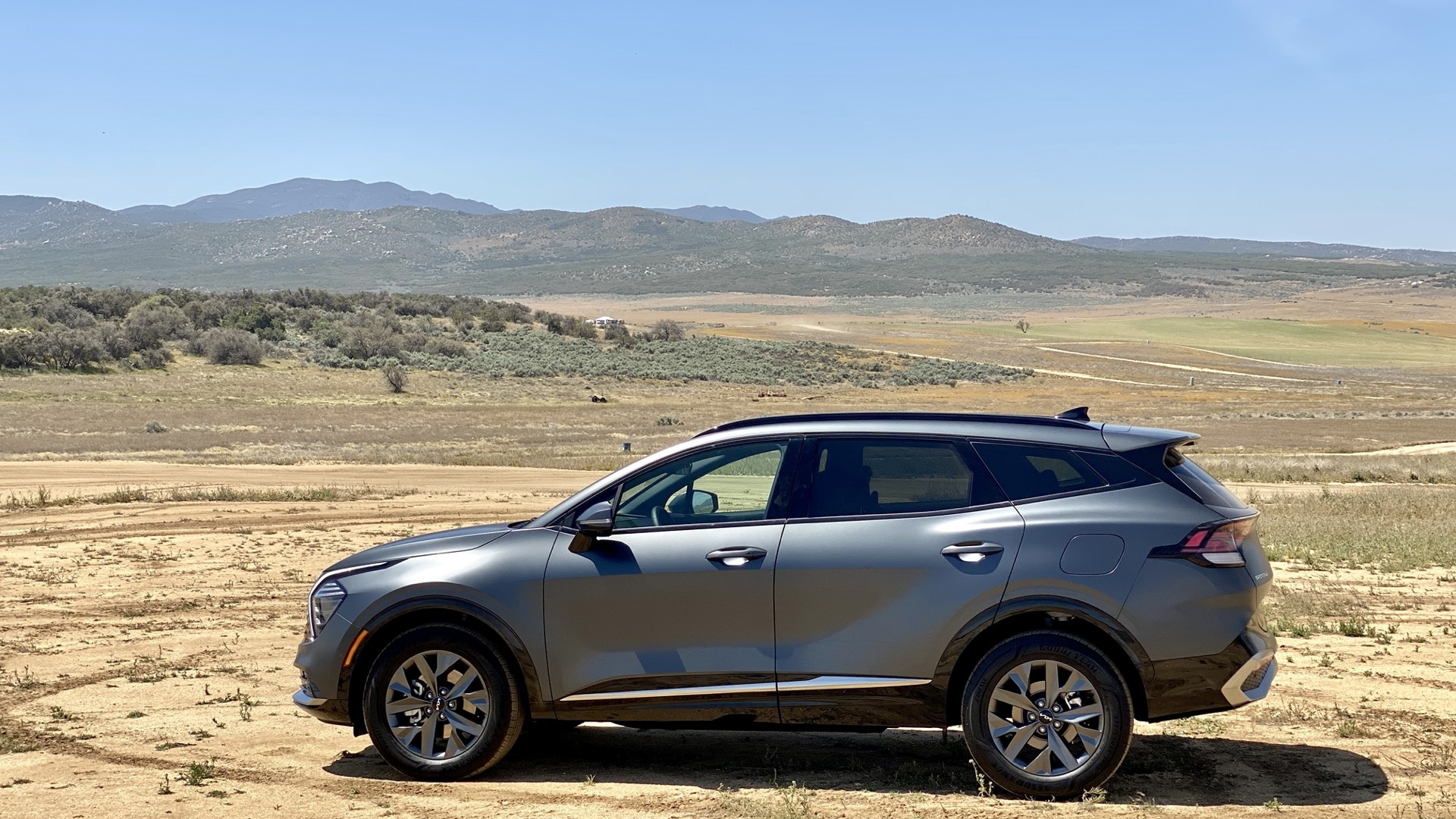 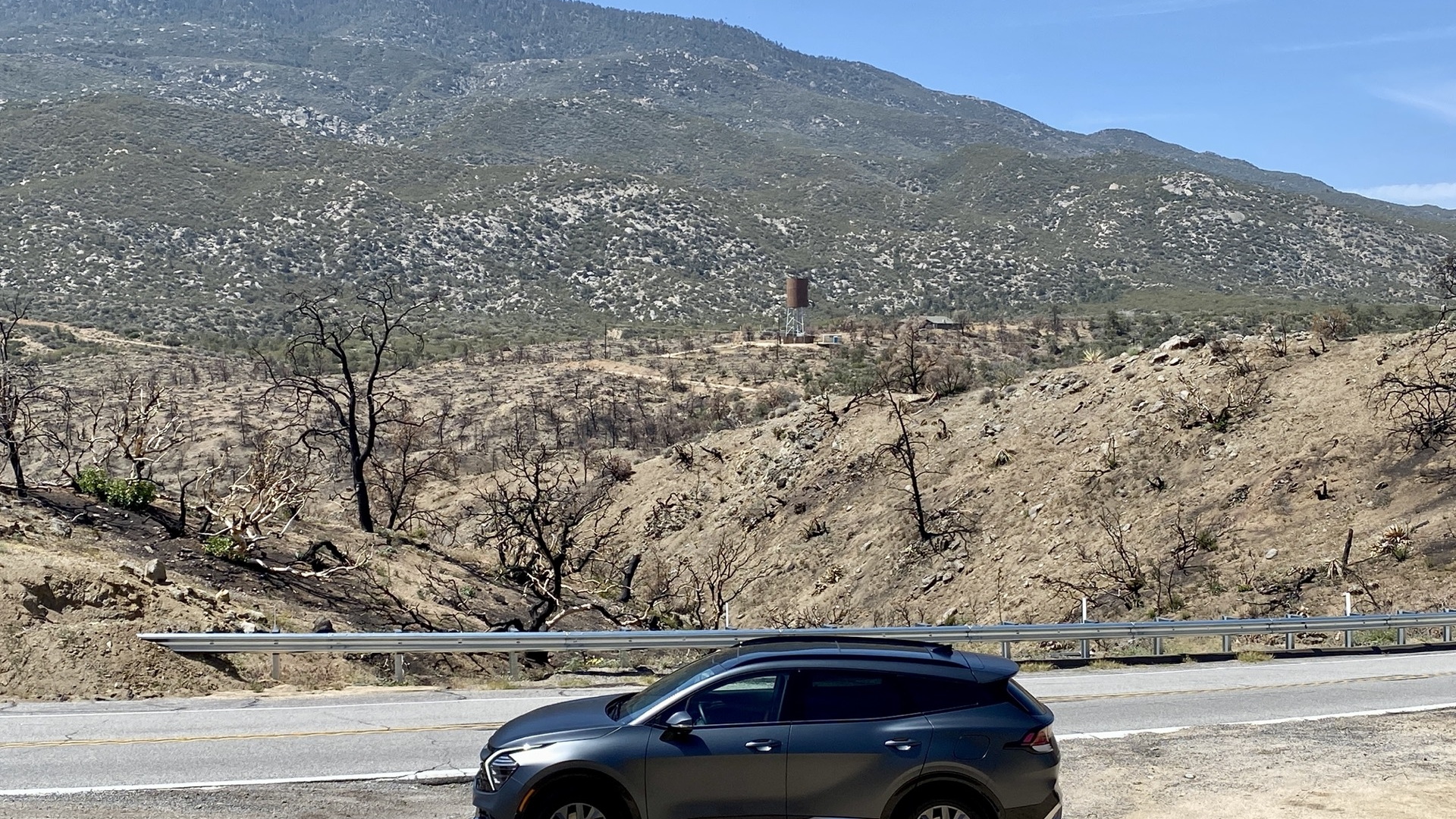 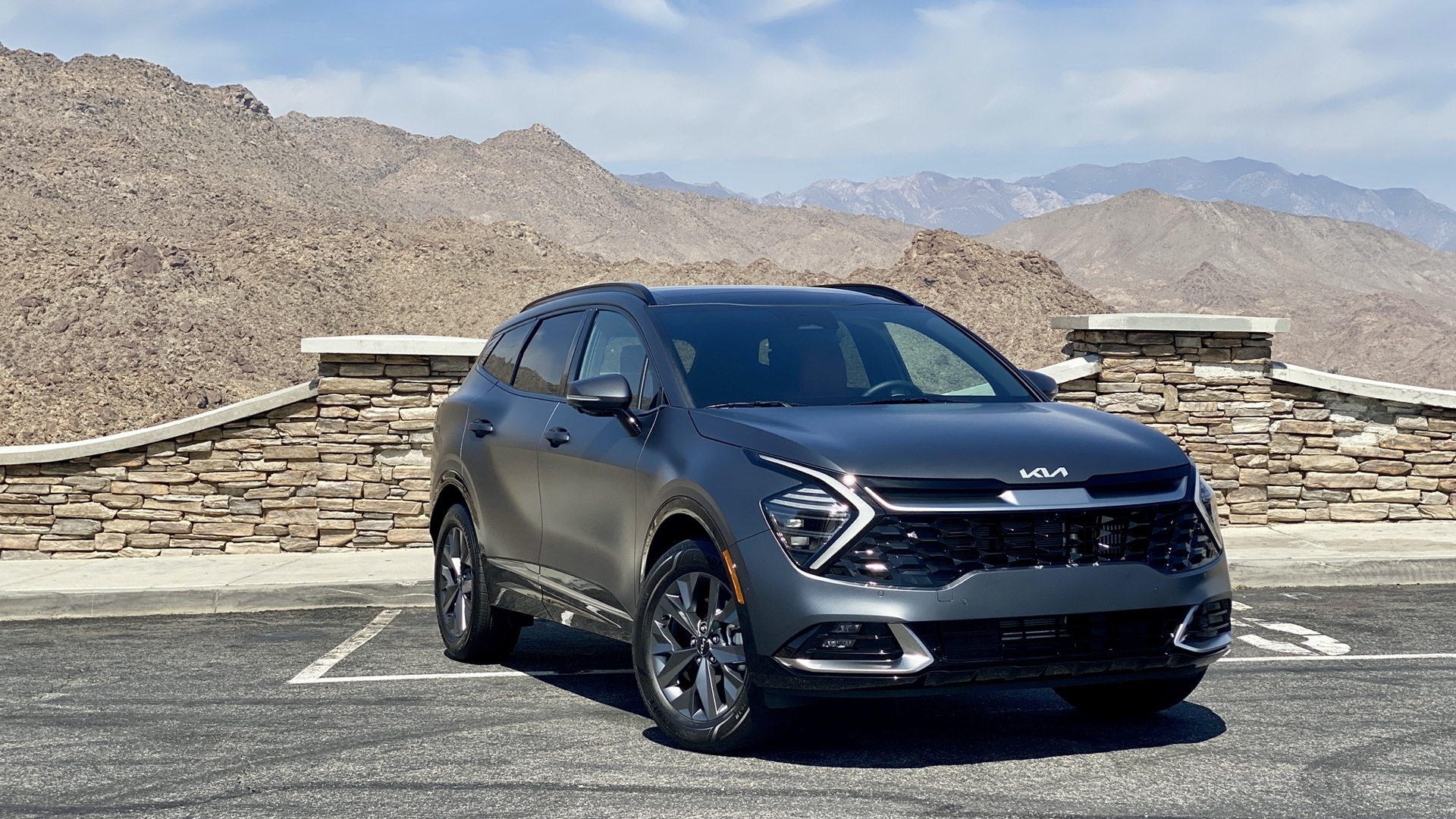 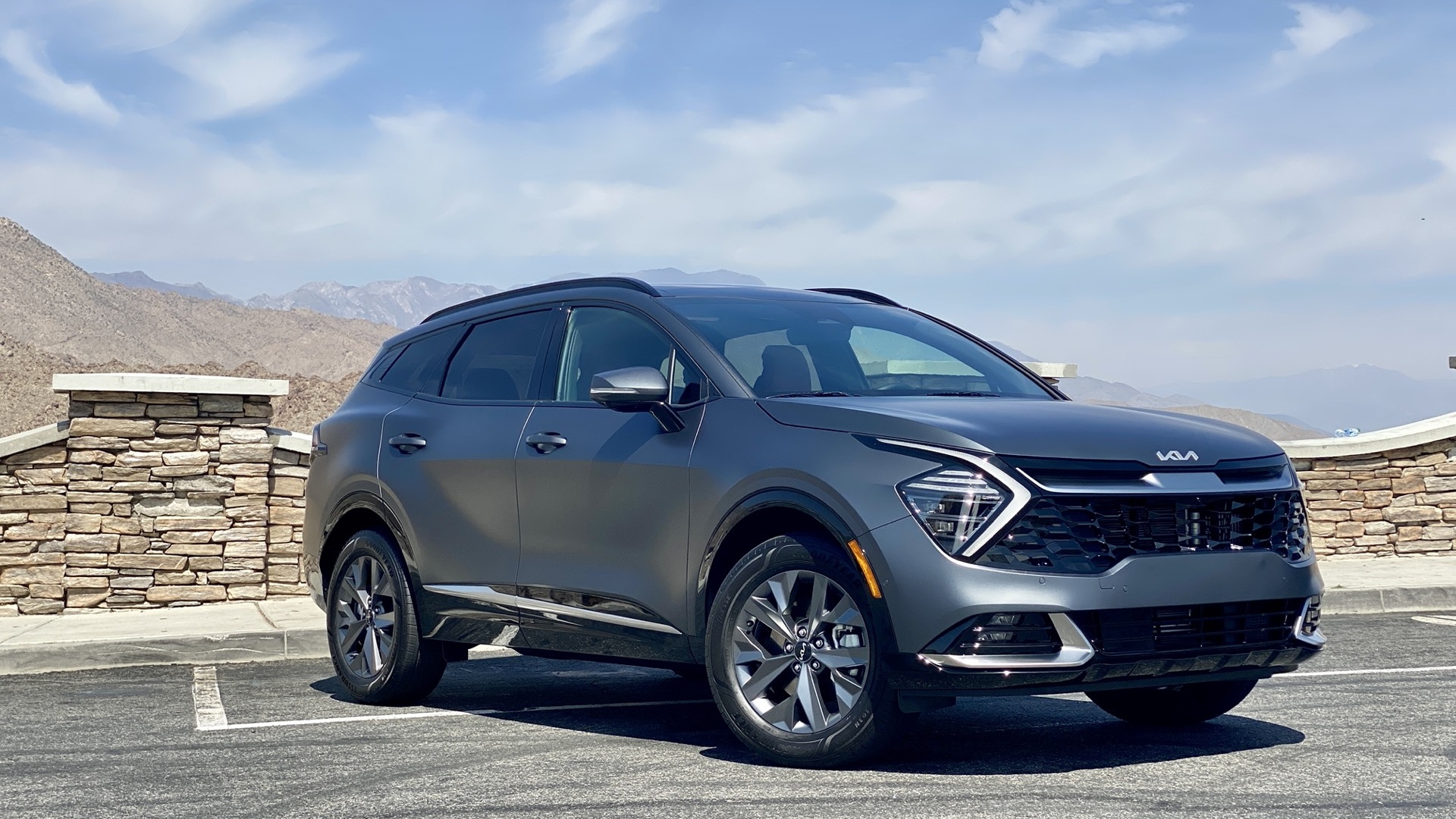 In a drive across California desert, the 2023 Kia Sportage Hybrid performed with more power and greater efficiency than the non-hybrid, and it ran much smoother and quieter. Its hybrid components sacrificed only one cubic foot of space in a Sportage that has grown larger in every measure. And it only costs about $1,300 more than a similarly equipped gas model.

The Sportage hybrid and its 43 mpg combined EPA rating stands out as the Sportage to buy—whether you drive across desert or some other major metro area. Unless it gets outperformed by the 2023 Sportage plug-in hybrid arriving later this summer.

The first Sportage hybrid is not only the best Sportage, it challenges hybrid rivals such as the Ford Escape, Honda CR-V, and Toyota RAV4, as well as the related 2022 Hyundai Tucson.

The hybrid can be had in LX, EX, and SX-Prestige trims, which lack the off-road cosmetics of the new X-Line and X-Pro grades exclusive to gas models. The Sportage hybrid is more subtle than rugged, and it’s not as daring as the new Tucson.

The dogbone grille grows broader than the previous generation, and large lower cutouts house fog lights. LED lighting comes standard, and the running lights boomerang around the corners. Subtle black cladding runs over the round wheel arches down the rockers, and most hybrids ride on 18-inch alloy wheels with a distinct design from the rest of the Sportage family. It looks confident without trying too hard to rewrite the book on compact crossover design. Inside, the main difference is a gear shifter dial on the hybrid console instead of a mechanical shifter on the non-hybrid.

The broader ends reflect the larger proportions of the new Sportage. Sharing a platform with the three-row Kia Sorento, the five-seater is half an inch wider and taller, 7.1 inches longer, and 3.4 inches longer in wheelbase than its predecessor.

The fifth-generation Sportage is larger, roomier, and sleeker, though it lacks a sporting edge regardless of powertrain or trim level. The hybrid drives best, with its 1.6-liter turbo-4 gasoline engine and 6-speed automatic transmission, working with a single electric motor and 1.49-kwh battery pack. The system generates 227 hp and 258 lb-ft of torque, same as in the 2022 Sorento Hybrid and similar to the Hyundai Tucson Hybrid, which comes with standard AWD. Towing capacity tops out at 2,000 lb.

The base Sportage LX comes with front-wheel drive, though AWD is an option. It’s standard on EX and SX-Prestige trims, which is what I drove while ascending from the desert valley of Palm Springs.

The Sportage Hybrid can jump from a stop, thanks to the torque supplemented off the line by the electric motor. It falls short of being quick, however, with an estimated 0-60 mph time of 7.0 seconds. The impressive dynamic was how smoothly the system balanced the gas and electric power delivery. The 6-speed shifted seamlessly enough to be forgotten, and the added insulation and sound absorbing materials muffled wind and engine noise. It was a competent, unobtrusive powertrain until driven back-to-back with the underpowered 187-hp 2.5-liter inline-4 in the gas model. Its rough, begrudging 8-speed automatic made the hybrid a marvel by comparison.

All-wheel-drive versions employ a propshaft to the rear wheels—a strategy shared with the Honda CR-V Hybrid—rather than an additional motor on the rear axle that might take up more space. A center locking differential splits the torque 50/50 to lock the front and rear axles, but otherwise the AWD system apportions torque based on the inputs. Decelerating into a turn lowers the motor torque and shifts the load to the front axle for more grip, and the reverse happens when leaving a turn.

With this system at work, the Sportage Hybrid plowed when pushed, but on twisty mountain roads it remained planted despite some sway from side to side. The steering is direct without being crisp, but it’s all in line with the portage of the Sportage.

AWD models have a raised ground clearance of 8.3 inches, compared to 7.1 inches in FWD only. That’s the same as off-road-oriented X-Pro models, though the 17-inch wheels on those models are wrapped in all-terrain tires. Kia didn’t let the hybrids on its off-road course, but X-Pros performed like a Subaru Outback.

The EPA rates AWD models at 38 mpg across the board, which trails the 40-mpg combined average of Toyota RAV4 and Ford Escape AWD hybrids. The uphill climb and the manner in which it was driven resulted in a 31-mpg average, according to the trip meter. The regenerative braking system lacks paddle shifters or an EV-only mode, keeping it easy for drivers switching over to a hybrid for the first time.

The cabin also keeps it easy with plenty of space, thanks to clever packaging and the battery placement under the rear seat. The rear seats are among the roomiest in the class with 41.3 inches of legroom, and the 60/40-split seats can recline for more comfort. Behind the seats, a tiered cargo floor can hide certain items or be lowered a couple inches for 39.5 cubic feet of cargo space, which is more than the Volkswagen Tiguan, with or without its third row. Fold the seats down with convenient latches in the hatch and the space expands to 73.7 cubic feet. The non-hybrid has 74.1 cubic feet, which is only 1.4 cubes shy of the Kia Sorento.

With a hybrid that can seat five and their gear (I envision college road trips home for the holidays) Kia has pulled off a rare feat in the compact crossover class. With a starting price of $28,545, including destination, and a 5-year/60,000-mile new car warranty, the pot only gets sweeter.

Hybrid models except for the base LX get a 12.3-inch touchscreen with Apple CarPlay and Android Auto (it still requires a cord for connectivity, despite available wireless smartphone charging) and a dynamic climate control panel below it. Touch the arrow button on the touch-sensitive display and the temperature dials change to volume and tuning, and the climate buttons turn into a menu bar for the touchscreen, same as in the Kia EV6.

The SX-Prestige I tested topped out at $37,500, but it had everything from cooled front seats to Harman Kardon sound. The mid-grade EX struck me as the best balance with AWD, synthetic leather instead of cloth seats, heated side mirrors, heated front seats, and a heated steering wheel for $32,245. That undercuts a similarly equipped Hyundai Tucson Hybrid by $1,000. The 2022 Toyota RAV4 Hybrid XLE Premium costs $34,650, and the Honda CR-V Hybrid EX-L and Ford Escape SEL Hybrid cost even more.

Kia expects the Hybrid to account for 20% of Sportage sales. They may be underestimating. Dollar for dollar, the 2023 Kia Sportage Hybrid is not just the best Sportage, it might be the best value for all compact crossover hybrids.

Kia paid for airfare and lodging for Green Car Reports to bring you this firsthand report.