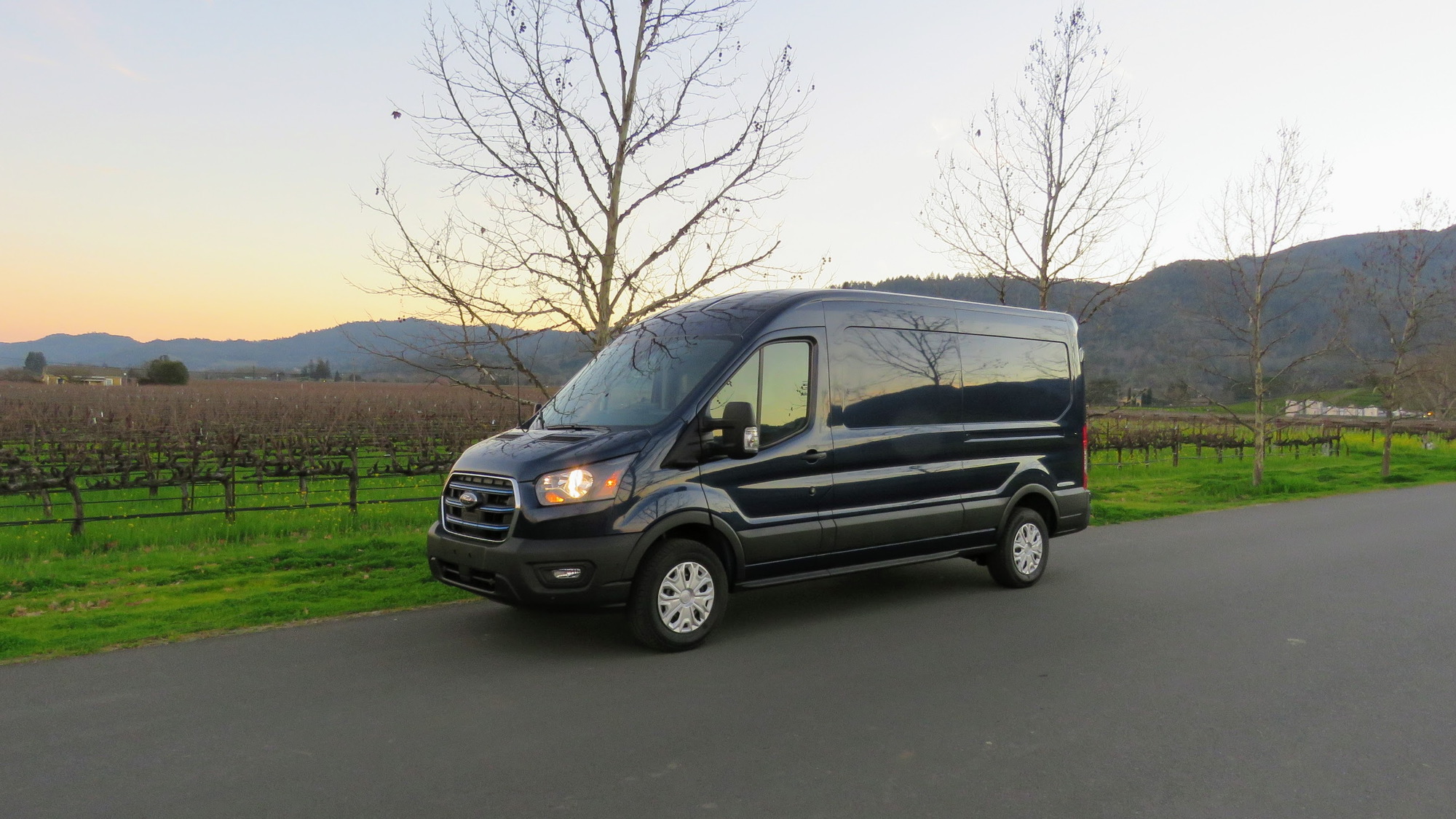 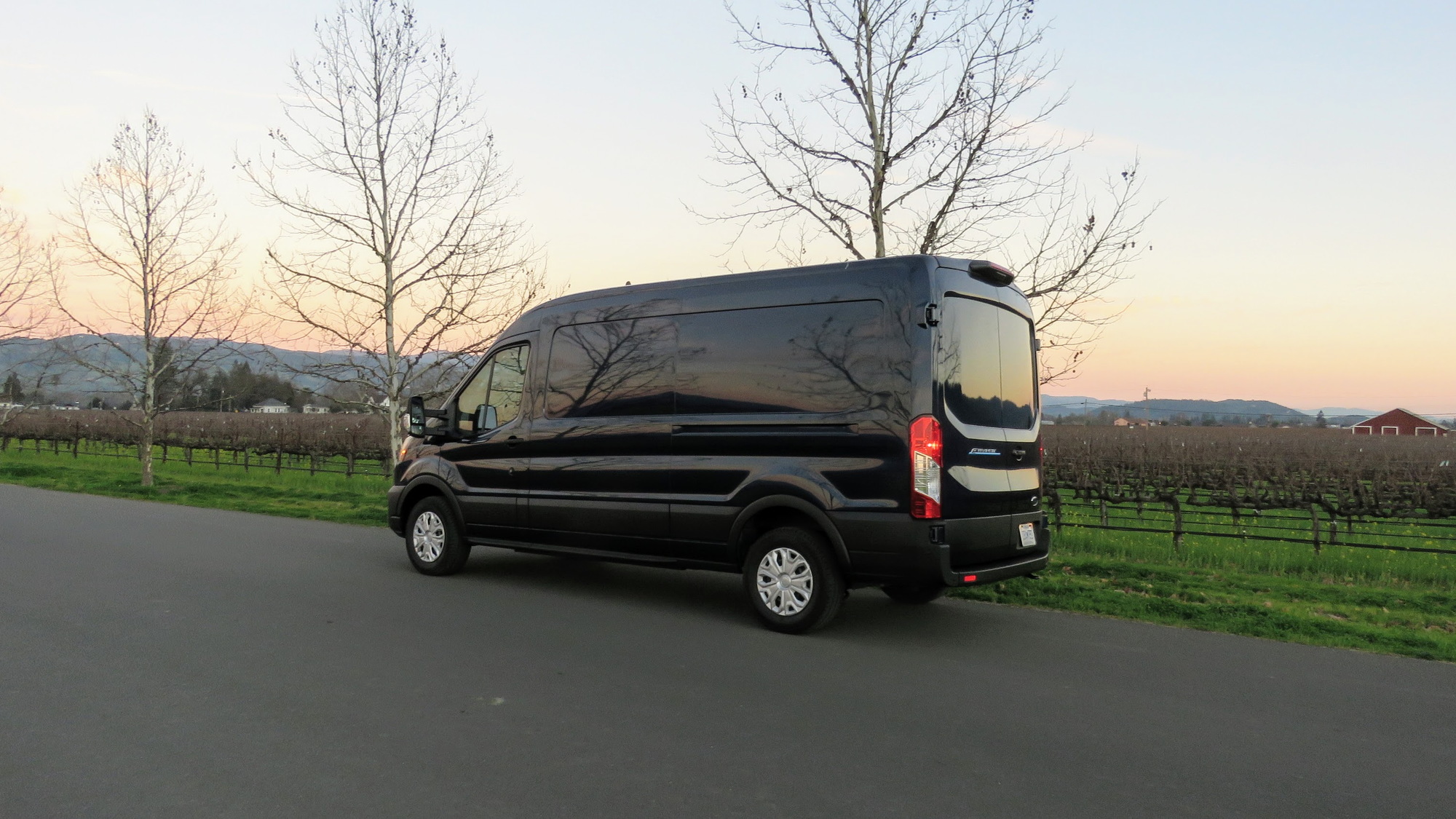 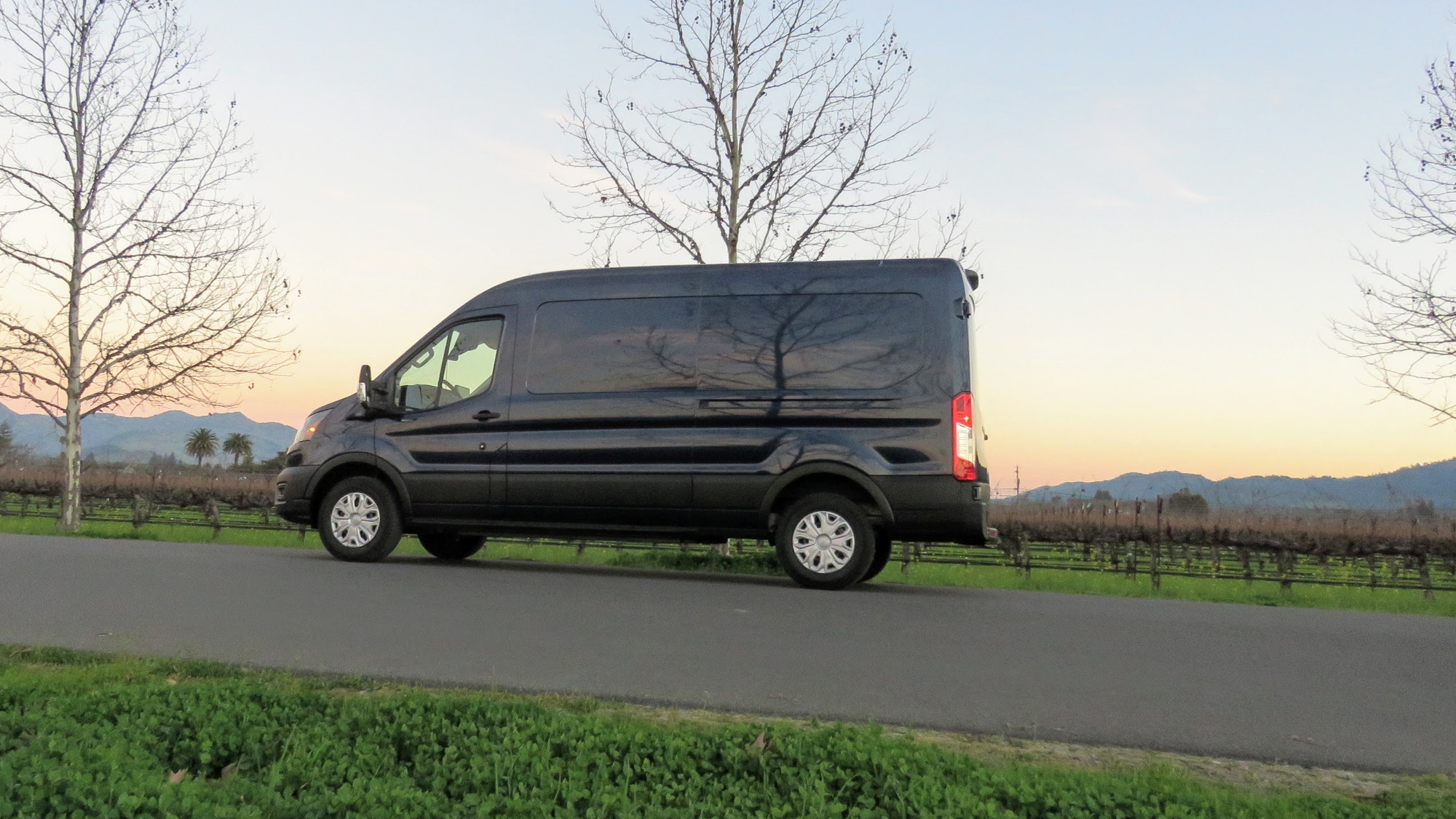 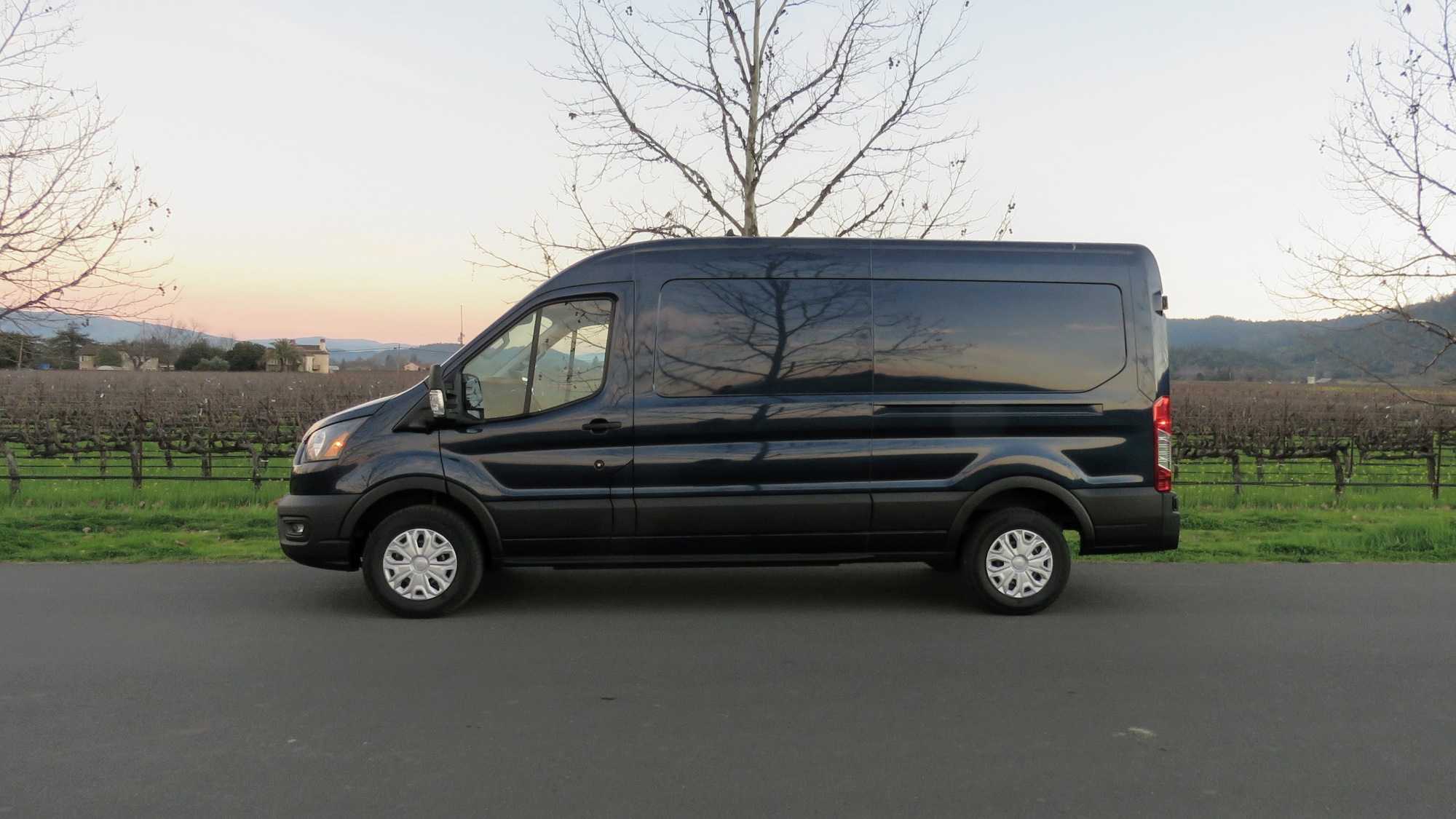 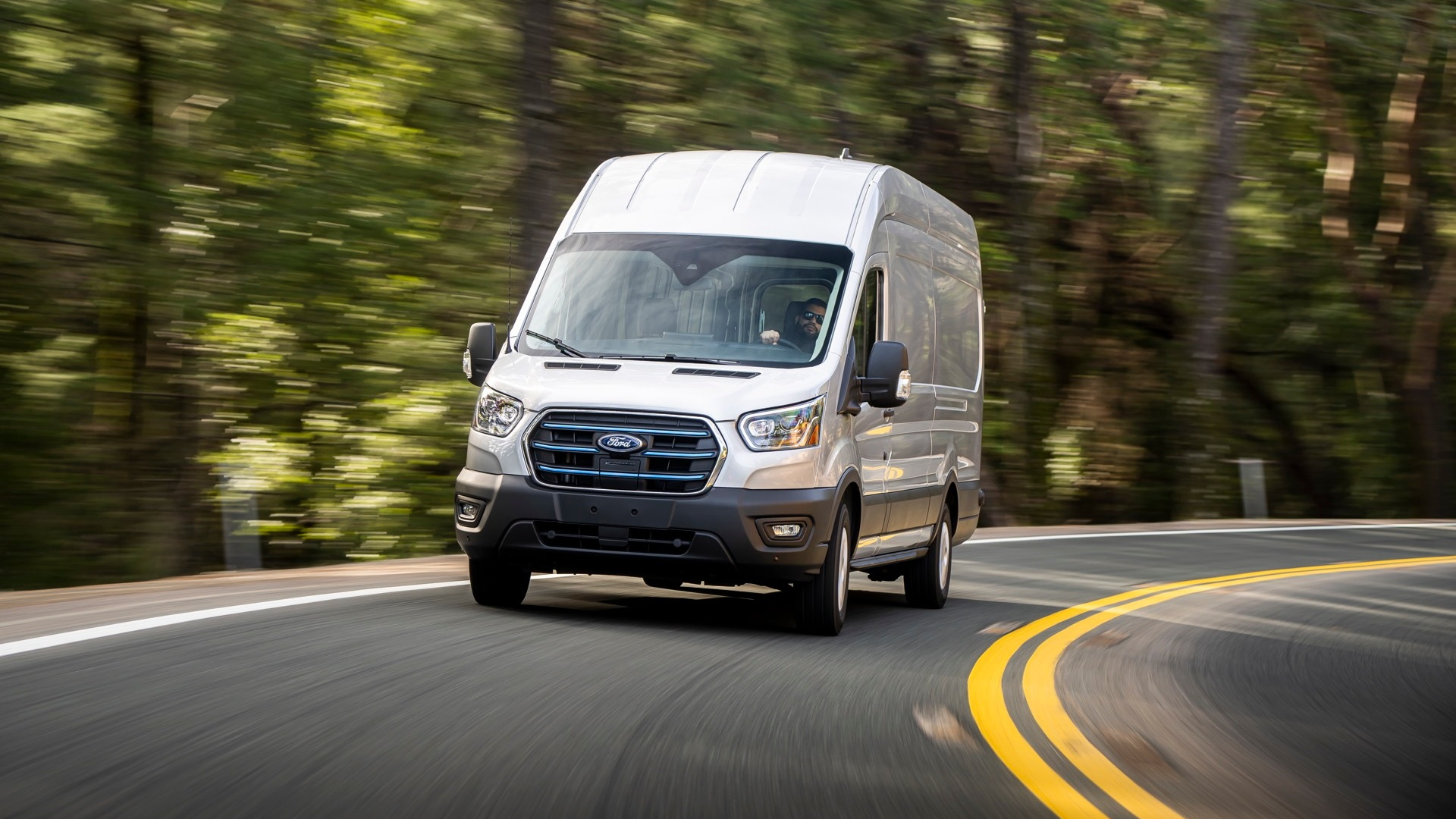 Even as companies see an electric shift of their van fleets as a net positive, they face a tricky coexistence: making the most of them alongside the gas and diesel vans that keep trucking.

That’s one of the challenges Ford wants to tackle for small business owners and fleet managers, with its buildout of Ford Pro services alongside the new electric trucks like this and the F-150 Lightning. Fleets of 50 vehicles or fewer are half of the commercial market. It’s big business for Ford, and it adds up to way more than last-mile delivery fleets for Amazon or FedEx.

It’s a whole lot easier to have everything speaking the same language. Physically, that’s why Ford is installing the same modem, communications and sensor hardware, and over-the-air upgradable software into all its vans. It’s also why the E-Transit was designed with mounting points that are familiar to any company that already upfits the Transit—think anything from plumbers’ vans to furniture delivery. Cargo room is at an identical starting point to internal combustion Transit models, too. 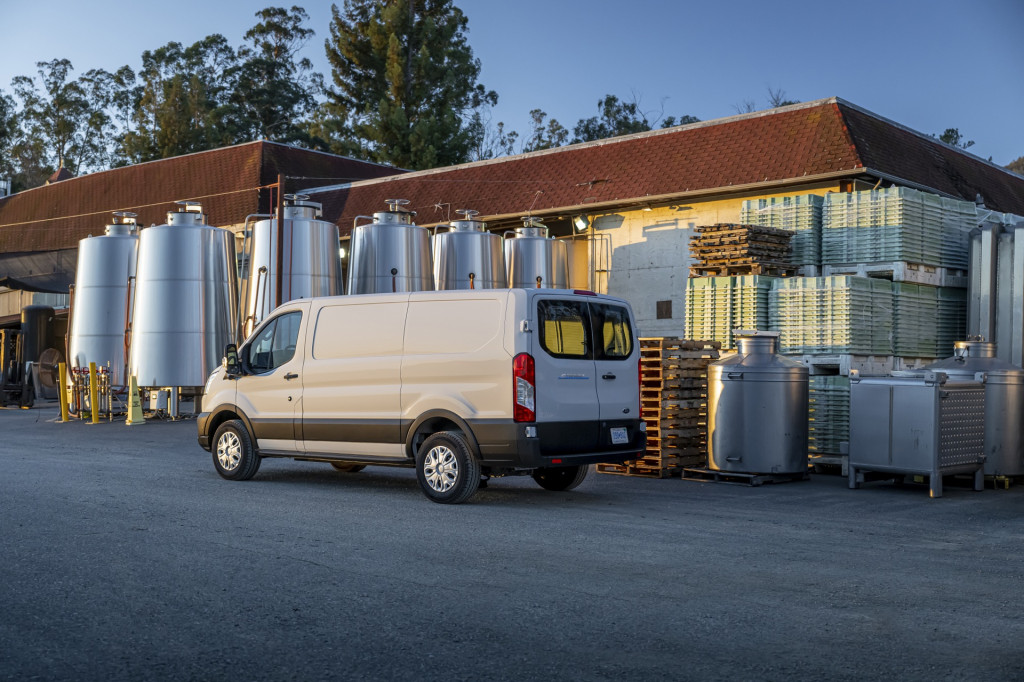 The Ford E-Transit electric van I drove last week helped to cement that impression—and pretty quickly, to underscore the strengths of going electric. It sounded like a drum on wheels pulling out of a bumpy driveway, just like any empty cargo van. But the ride quality over uneven, back-road pavement was better than I’d expected (or recalled) from an E-Transit, and the perky, quiet feel once underway underscored how much of the baked-in impression of big vans comes from vibration-prone engines and the shudder of gears changing.

Mach-E battery—Plug and Charge and all

The pleasant ride is likely the happy result of the battery pack’s placement. The E-Transit’s 68-kwh liquid-cooled battery pack is very closely related inside to the smaller pack used in the Ford Mustang Mach-E—with cells sourced from an LG facility in Poland—but with a different outside case. The battery pack is essentially bolted under the frame but isolated from it, with crash protection added to the sides. Altogether, Ford says that the pack is attached to its cradle with “a unique vibration isolation system.”

Its onboard charger permits 10.5 kw, for a full charge in about eight hours (at 48A), and it can reach 115 kw in CCS-format DC fast-charging, allowing a 15% to 80% charge in 34 minutes. The charge port is right at the front of the vehicle, and it’s Plug and Charge compatible, meaning drivers won’t have to carry company cards for charging

There are some obvious strengths in the layout, versus an approach that unifies the pack with the structure. Here, Ford could easily sub in a different-sized battery pack, for instance, and fleet operators could potentially change their mind on battery packs if multiple sizes were to become available. 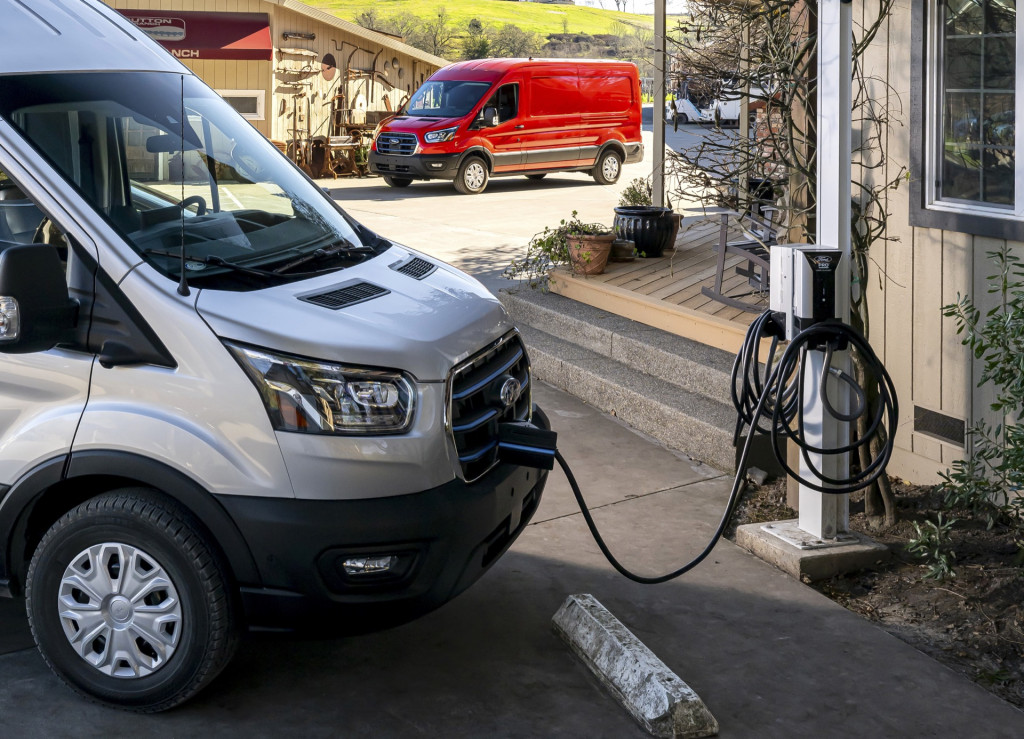 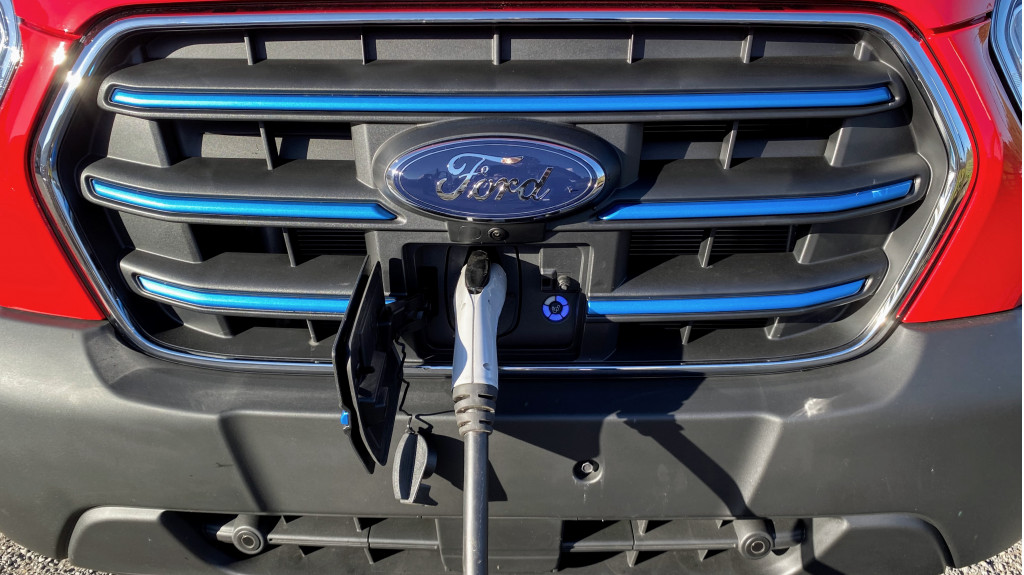 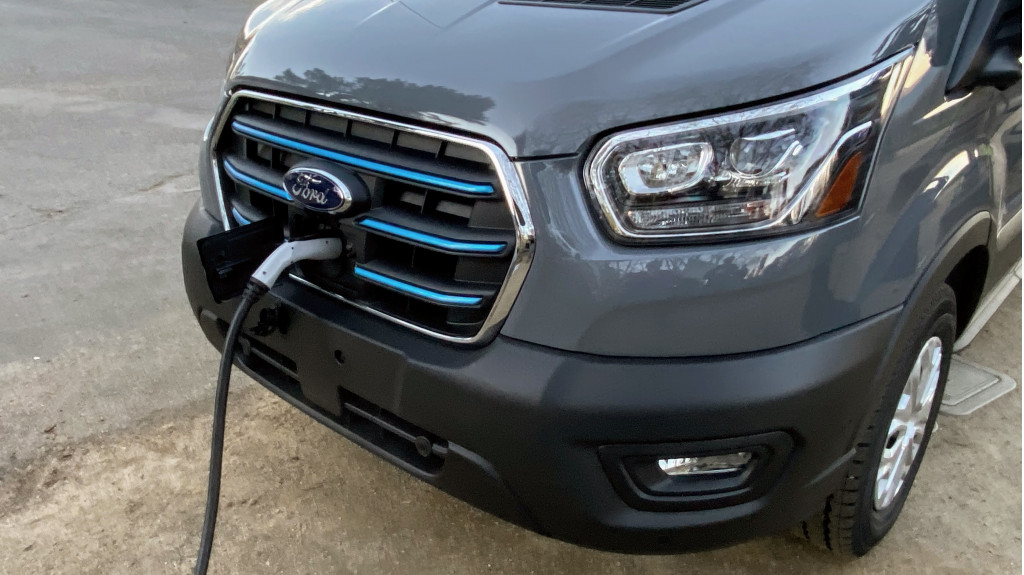 The battery pack is expected to yield an EPA-cycle range of about 126 miles, depending on the use and the upfit. Ford says that from 30 million miles of commercial-vehicle telematics data, the average daily mileage is about 74 miles. Giving the E-Transit too much battery adds weight and knocks down precious gross vehicle weight (GVWR).

The motor is shared with the upcoming F-150 Lightning pickup. In all models thus far, a 198-kw permanent-magnet unit, with an integrated inverter/controller, delivers 266 hp and 317 lb-ft of torque. That’s mounted in back, providing performance that was entertainingly perky in an empty van and torquey enough to feel like it could keep up with a load of cargo. In front, where the engine would otherwise be, there’s a “Megabrace” that cradles the air conditioning compressor, DC/DC converter, PTC heater, cooling pumps, onboard charger, and Pro Power Onboard hardware.

The E-Transit has a different sort of regenerative braking interface—one that emulates Ford’s European hybrid models rather than other Ford electric models such as the Mustang Mach-E and upcoming F-150 Lightning. In ‘D,’ the E-Transit glides by default, but three taps of the brake increases regenerative braking behavior incrementally—allowing about 30%, 60%, and 100% of its maximum regen through respective taps. Or to skip directly to maximum regen you can hit the ‘L’ button at the center of the shift selector dial. Even then you won’t quite get one-pedal driving or the instant drag you get in some EVs when you let off the accelerator; the E-Transit’s accelerator gives you a moment of pause on lift before it ramps up regen. 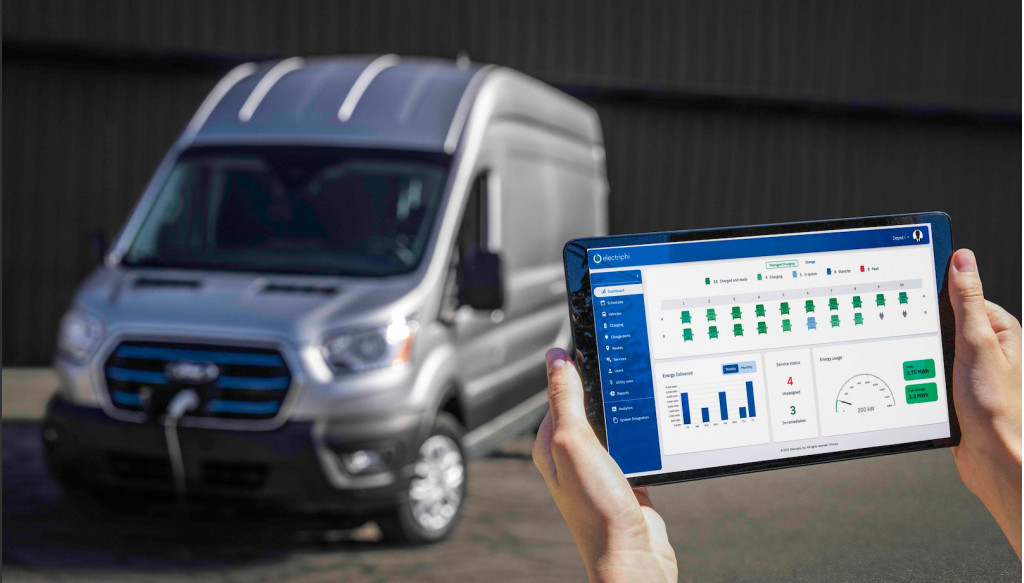 Ford envisions its software to become a one-stop shop for fleet managers transitioning to electric vans while still balancing gas and diesel ones.

Ford Pro is integrating an intelligent management system into its trucks to turn them into “generators of data,” as Ford CEO Jim Farley put it in a presentation last week. The serious software push also included the acquisition of data-centric Electriphi last year, addressing the optimization of charging, which is a fleet manager “pain point” according to the company. That incorporates local grid information to allow more of a nuts-and-bolts view on how and when to charge vehicles to minimize energy costs and meet renewable energy targets. And it’s even helping fleet managers size up charging needs ahead of the delivery of more EVs. 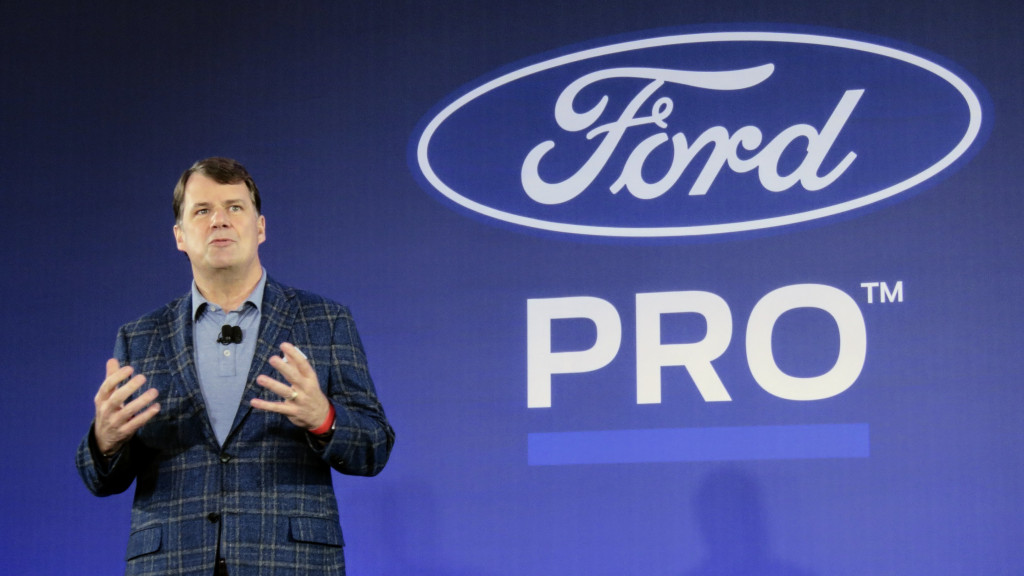 The fleet manager can look in on vans and see which are charged, and telematics within the vehicle modify range estimates—what’s visible by the driver and by the fleet manager—based on loading, weather, and more. Within the vehicle,an Eco mode has a driver-coaching feature that keeps drivers from overaccelerating for the road. And Ford Pro telematics are offering vehicle tracking, crash detection, service needs, driver behavior insights, and in-vehicle coaching.

That coach was turned on in my test van, and the voice prompts gave me multiple demerits on an all-out sprint to 65 mph. Reckless generic-white-van drivers, watch out.

As for those service needs, Ford is also letting owners opt into a system in which dealerships can anticipate when maintenance visits will be needed, scheduling them for fleet managers when they involve the least downtime.

There’s a lot of potential to get work done inside and around the vans, too. With Pro Power Onboard, E-Transit users have access to 2.4 kw through outlets that can power multiple tools, worksite equipment, or van accessories. A tall-roof version allows those up to 6-foot-9 to stand up within the van. 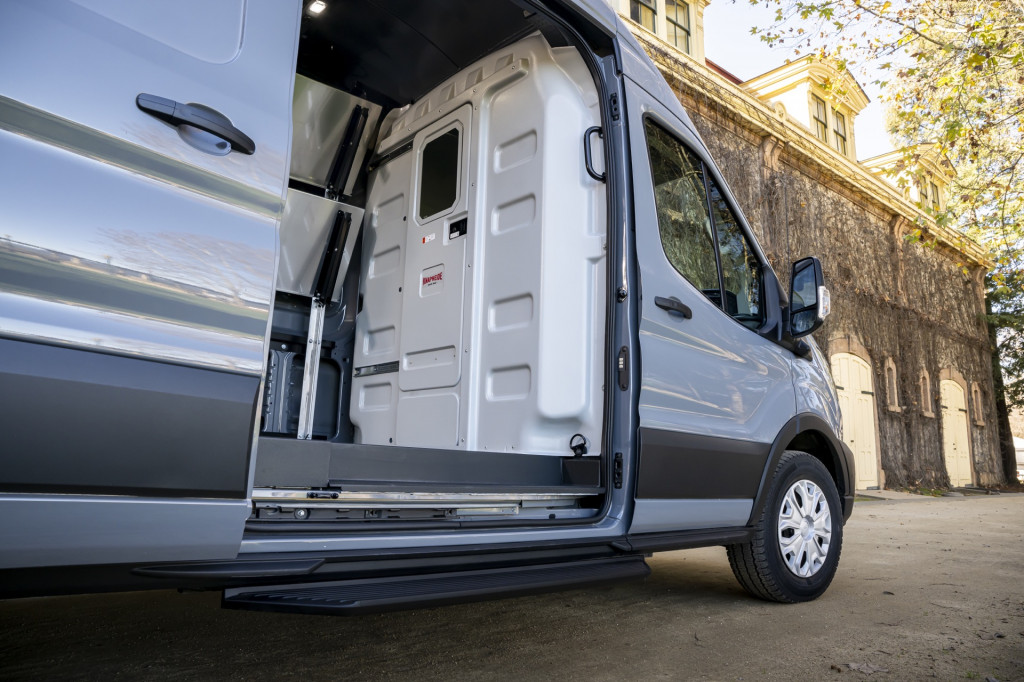 What I drove was, of course, just a small sample from a vast lineup—and really, the foundation for countless upfits. The E-Transit comes in eight configurations, including cargo van, cutaway, and chassis cab layouts. Payloads range from 3,350 to 3,800 lb for the complete vans, with high-roof, medium-roof, and low-roof versions.

The E-Transit also includes a 4G LTE modem for up to 10 devices, over-the-air updates, and the whole e-telematics suite including remote preconditioning. The PTC heater helps save some energy versus a standard resistive heater; there’s no heat pump right now, but Ford is considering it.

A Sync 4 touchscreen offers a reasonable amount of interface carryover from Ford’s passenger vehicles, and it’s relatively straightforward. Between odd loading, maneuverability challenges, and tight spaces, drivers have a lot to focus on. With about 20 minutes behind the wheel and another 20 minutes perusing the interface, I felt at ease—although, knowing what I knew about all “eye in the sky” telematics features, I expected to return to questions about my excess energy use.

The E-Transit starts at $43,295 and is reaching customers soon. Ford isn’t planning a passenger-focused version, but it knows that there will be passenger-friendly upfits on the way.

It's all familiar, but different. Establishing fully electric as a new norm that fits right in, rather than an exotic new form, is smart business Ford is counting on. Now is it an upfit to uplift?