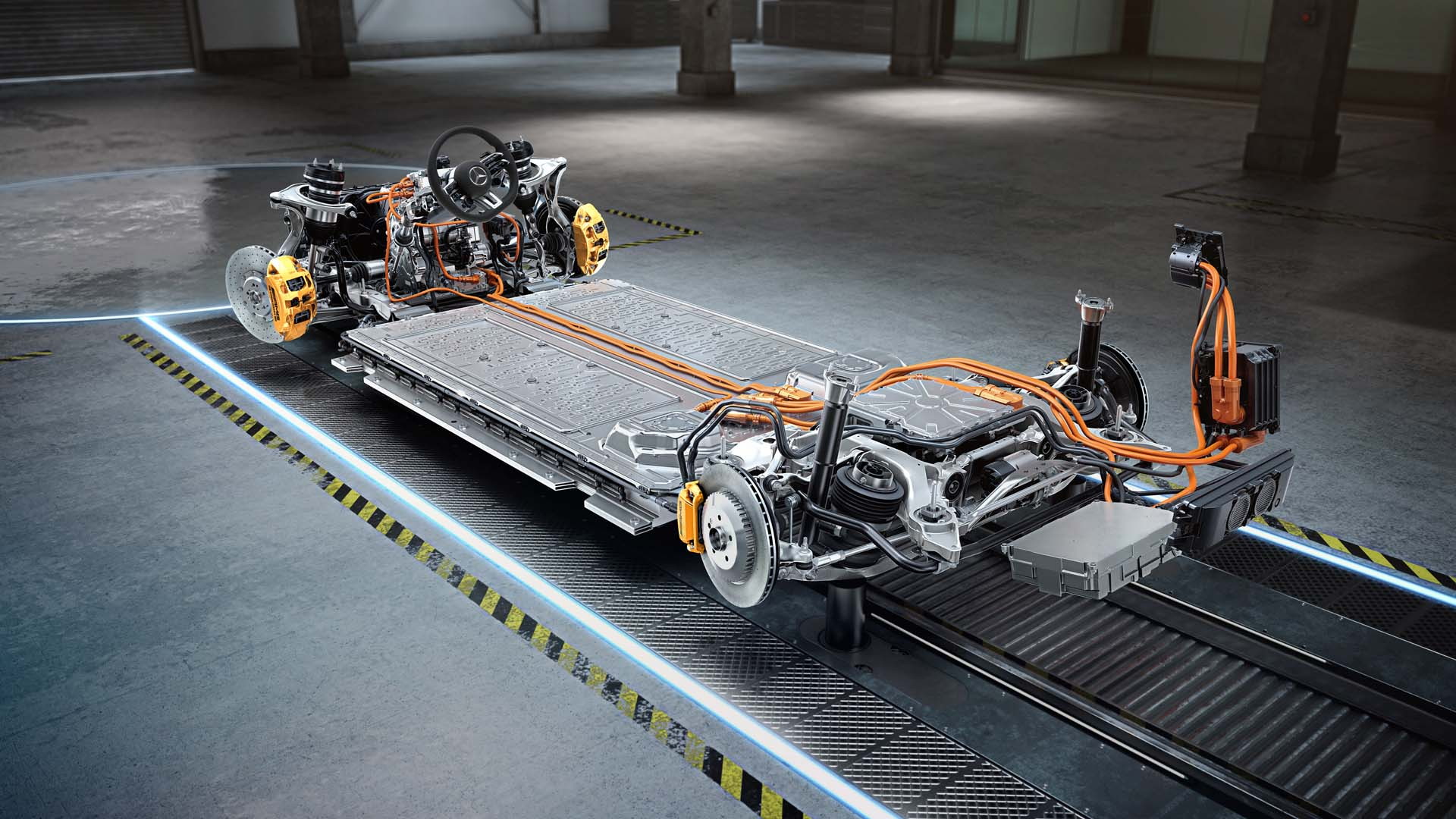 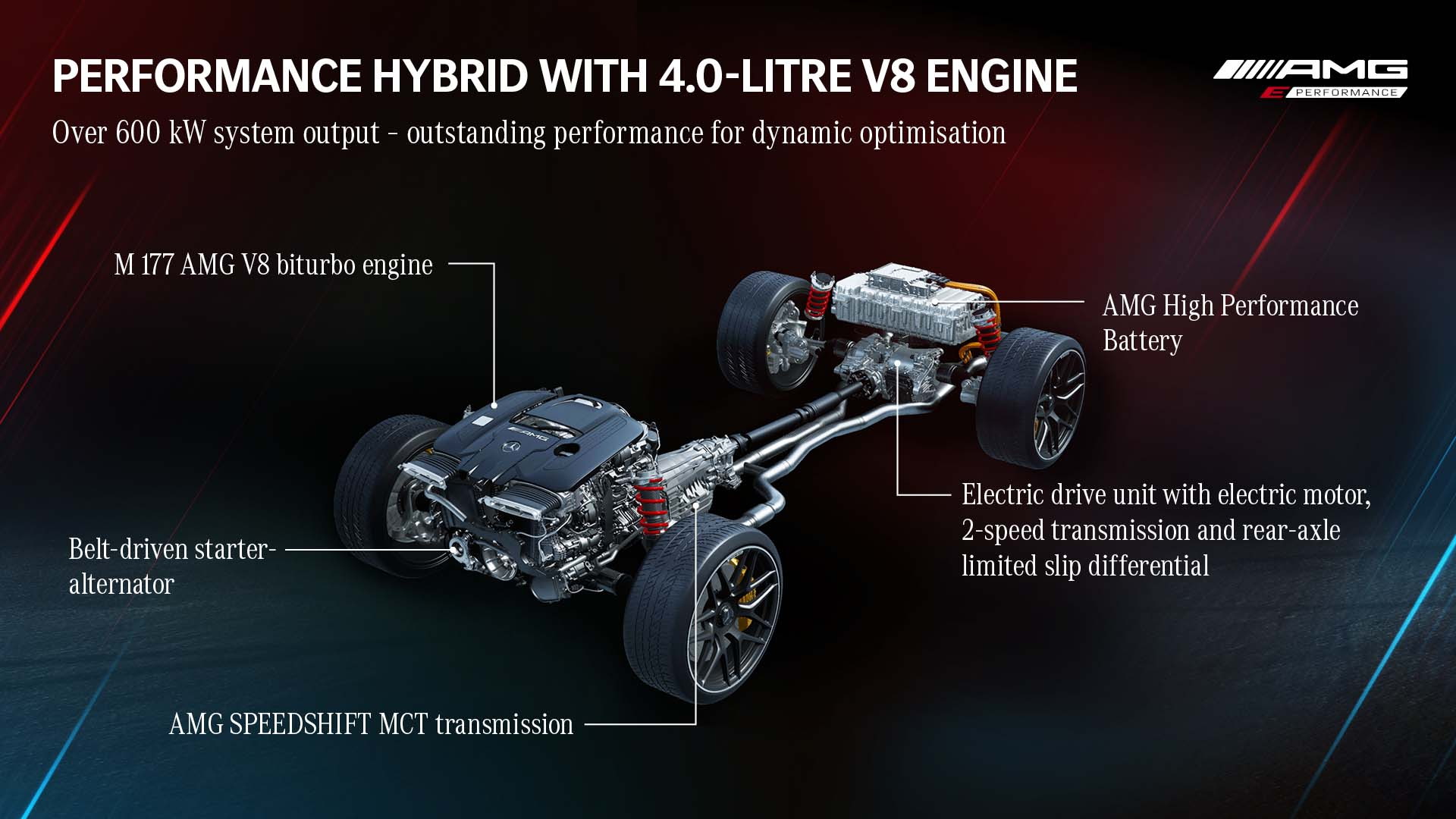 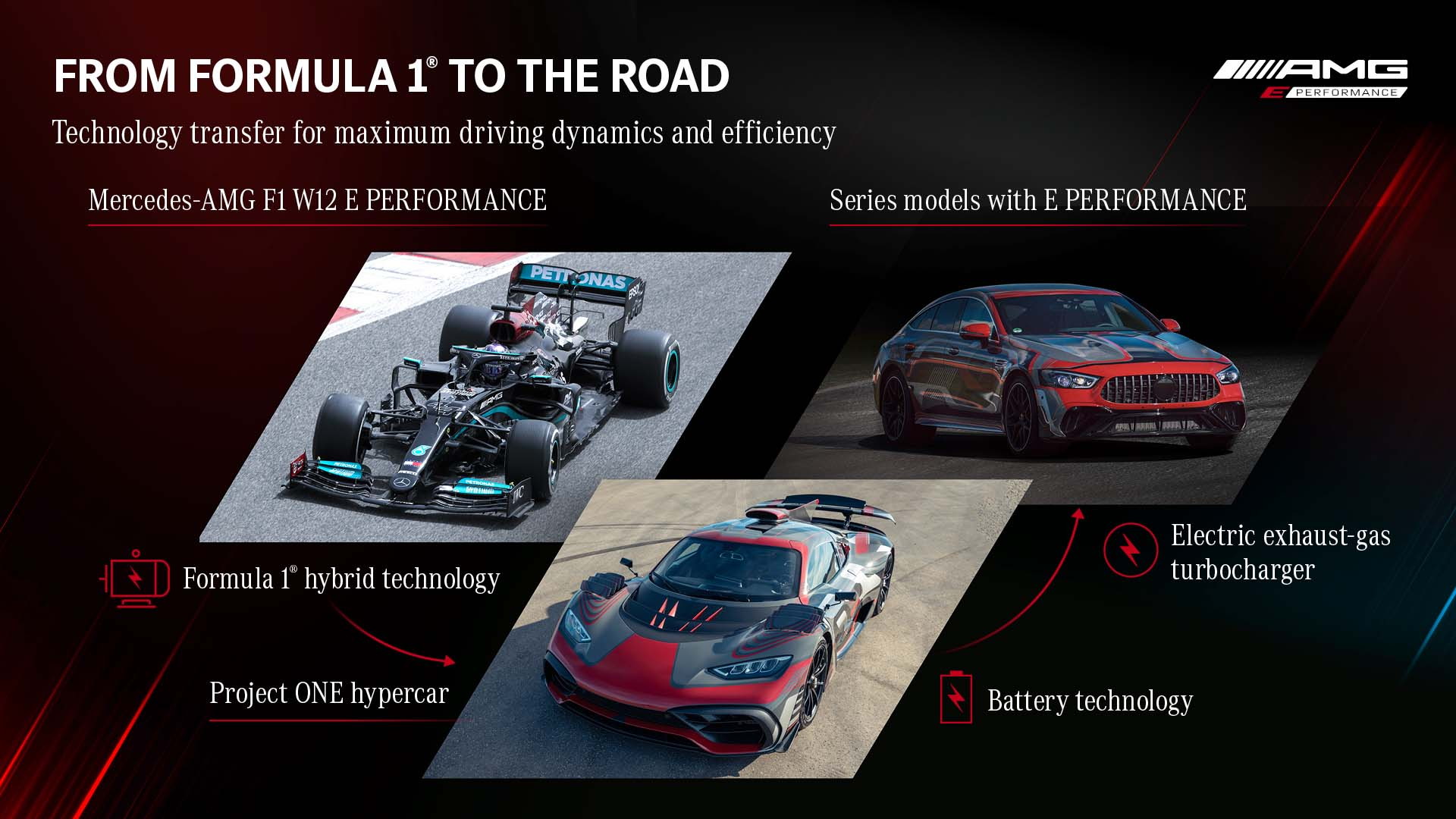 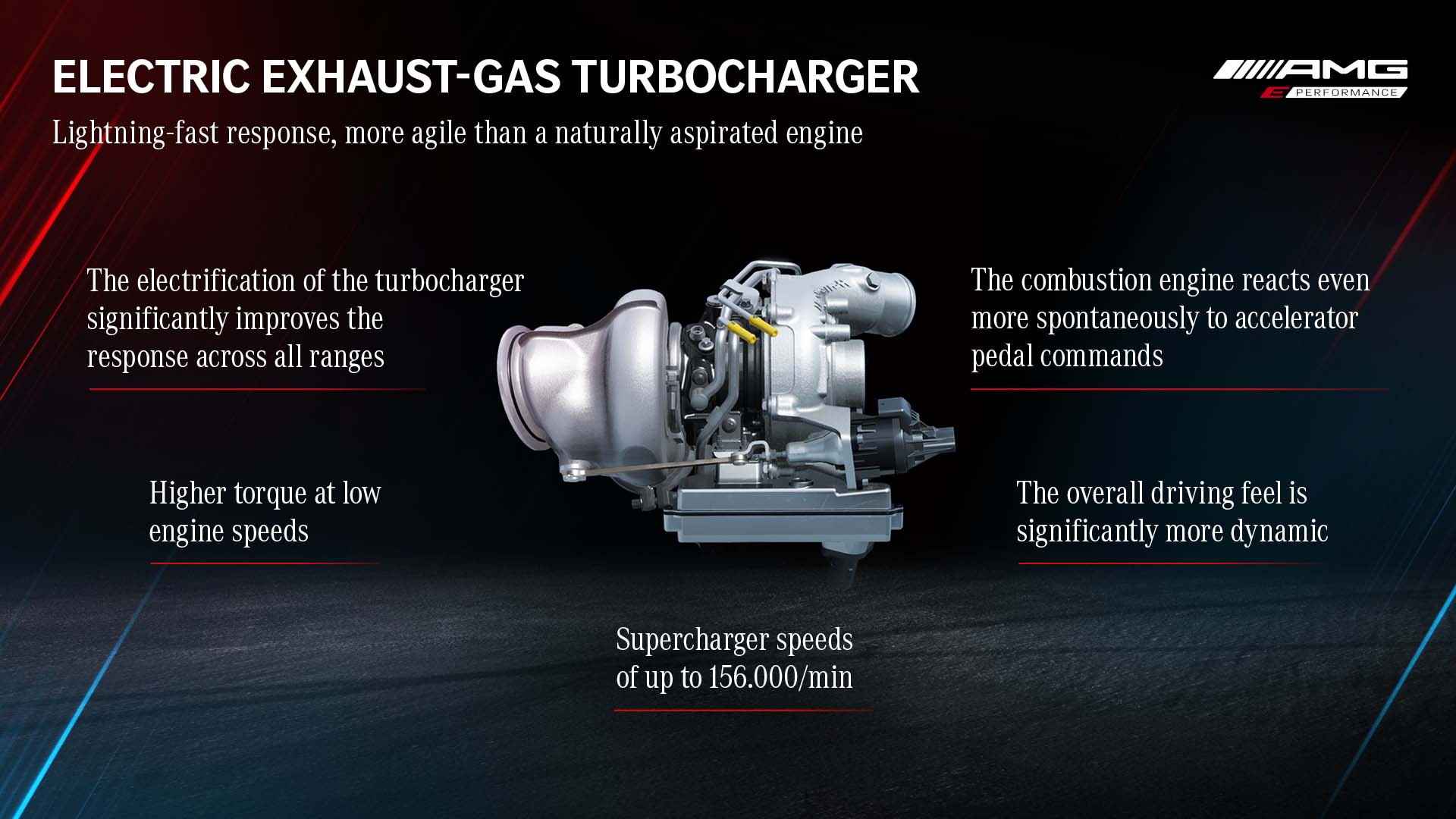 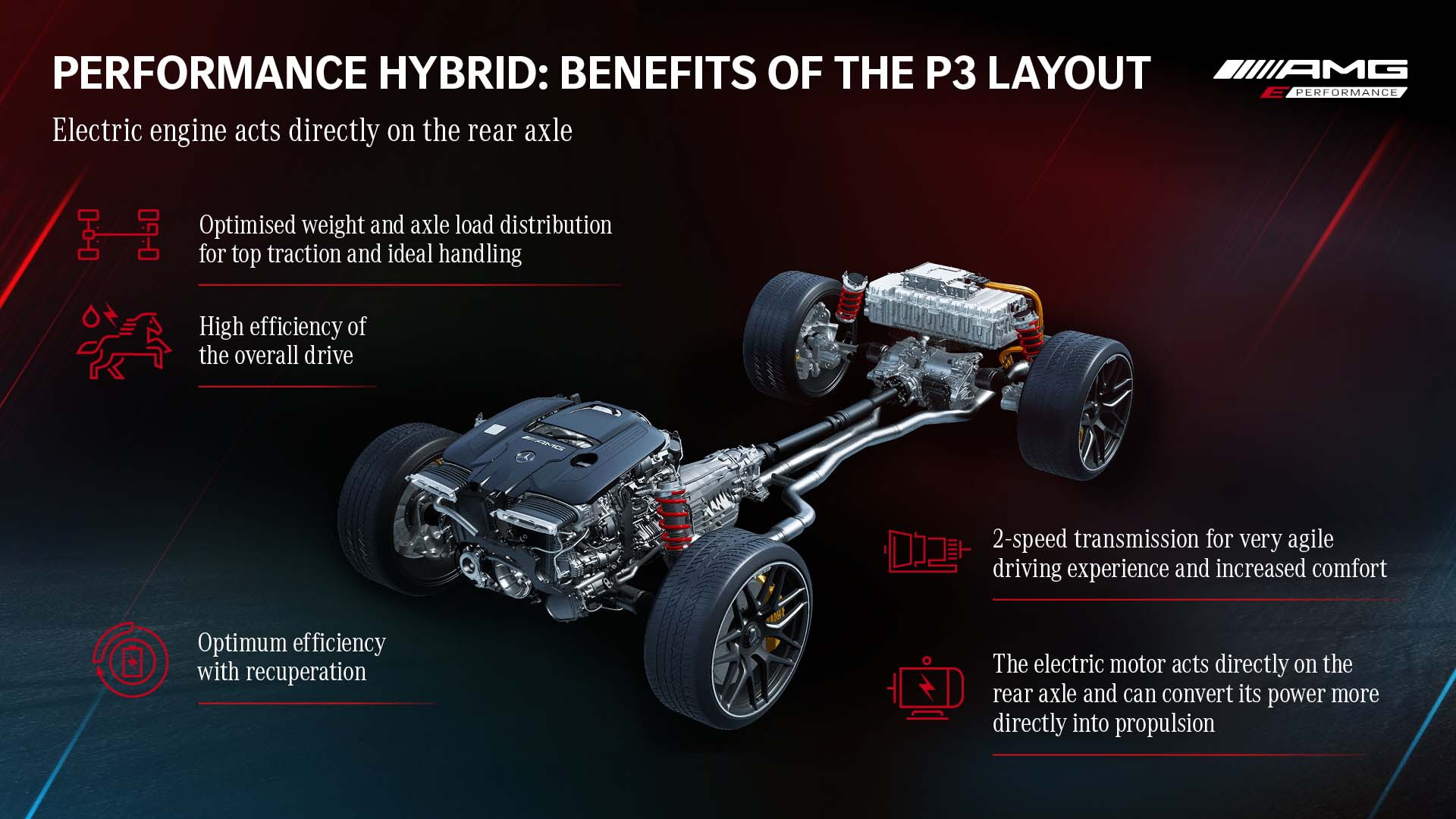 Mercedes-AMG sees go-fast electric vehicles—versions of the EQS and EQE, and others—as the future. But before then the performance division of Mercedes-Benz is planning to deploy a special kind of plug-in hybrid system that uses its extra charge toward track time as much as the commute.

Most noteworthy, the new Mercedes-AMG plug-in hybrids, due later this year, are different than other Mercedes PHEVs in that they package a substantial electric motor at the rear wheels. It functions as part of a hybrid system for the full vehicle, but it’s more powerful than what Mercedes-Benz has used in any of its other plug-in hybrids in front—adding up to 201 hp and 236 pound-feet of torque for bursts, or 94 hp otherwise.

It also adds a 2-speed transmission that helps the motor, as in the Porsche Taycan, launch assertively while also aiding high-speed responsiveness. According to the company, the two-speed will shift to its upper gear above 87 mph (140 km/h), thus allowing a very high top speed.

In perhaps the biggest nod that this system is oriented for the track, Mercedes-AMG didn’t want to quote a driving range for vehicles using the system—and we won’t be surprised if it amounts to the vicinity of 10 miles or less.

The 6.1-kwh battery pack that’s part of the system is charged up via a 3.7-kwh onboard charger in less than two hours, or by driving the vehicle for some distance. It’s adapted from the battery used in the company’s Formula One race car, and it has 560 cylindrical lithium-ion cells—in the 2170 format Tesla commonly uses—with a stout liquid-cooling system. It’s very energy-dense and compact, and Mercedes-AMG says that it has double the power density of other hybrid packs.

Models with the system will offer four different levels of brake recuperation, with the top level recovering a peak 90 kw and yielding one-pedal driving. Although these models are geared toward those who want to put the electrification to full use on the track, AMG told GCR that fast-charging would have added greater complexity and weight.

The car will, however, travel at up to 81 mph in its Electric mode, and separately there’s an Efficiency mode that will operate it like a fuel-efficient hybrid. That’s the fringe use here, though, with the emphasis on the S, S+, and Race modes that aim to extract the most performance from the combination.

Mercedes-AMG plans to offer the system in special models badged E Performance, featuring one of two different engines under the hood: a 2.0-liter turbo-4 with a new electric turbocharger that helps improve responsiveness; or a twin-turbo 4.0-liter V-8. Both engines already add a starter-alternator-style mild-hybrid system that helps smooth the load to accessories and keep the engine off a little more often.

Altogether, the system will make 643 horsepower or more with the smaller engine or 804 hp with the V-8. These models will of course get their own transmissions

The V-8 system, due in the Mercedes-AMG GT 4-door later this year, as well as AMG’s other large models, will be paired with an AMG-exclusive Speedshift transmission—currently a 9-speed automatic in the V-8 applications.

The system could potentially help boost the efficiency of such high-performance models on the way to and from the track, or when they’re driven daily. But the bigger point is that it moves electric just a little bit closer to the forefront.