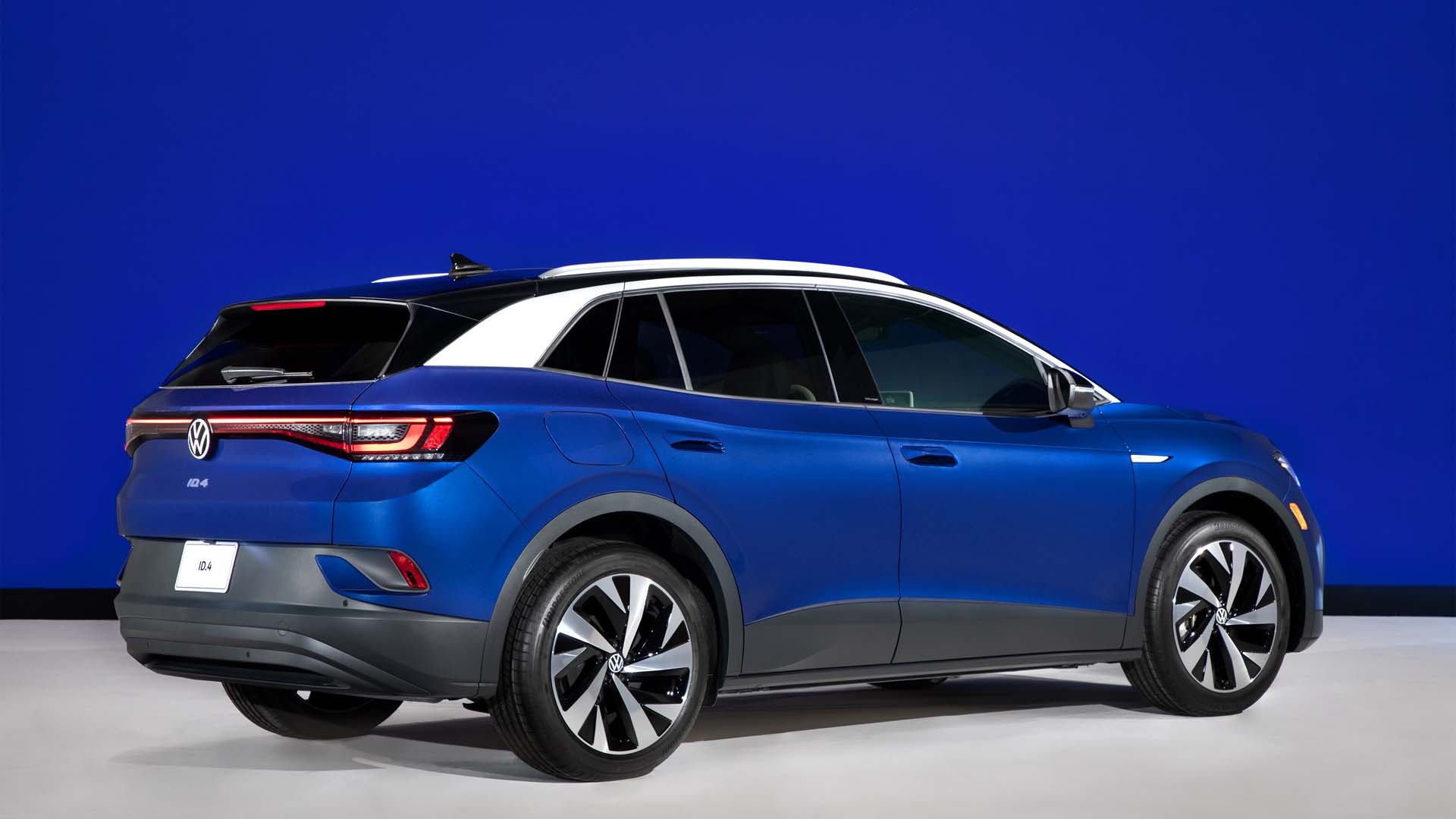 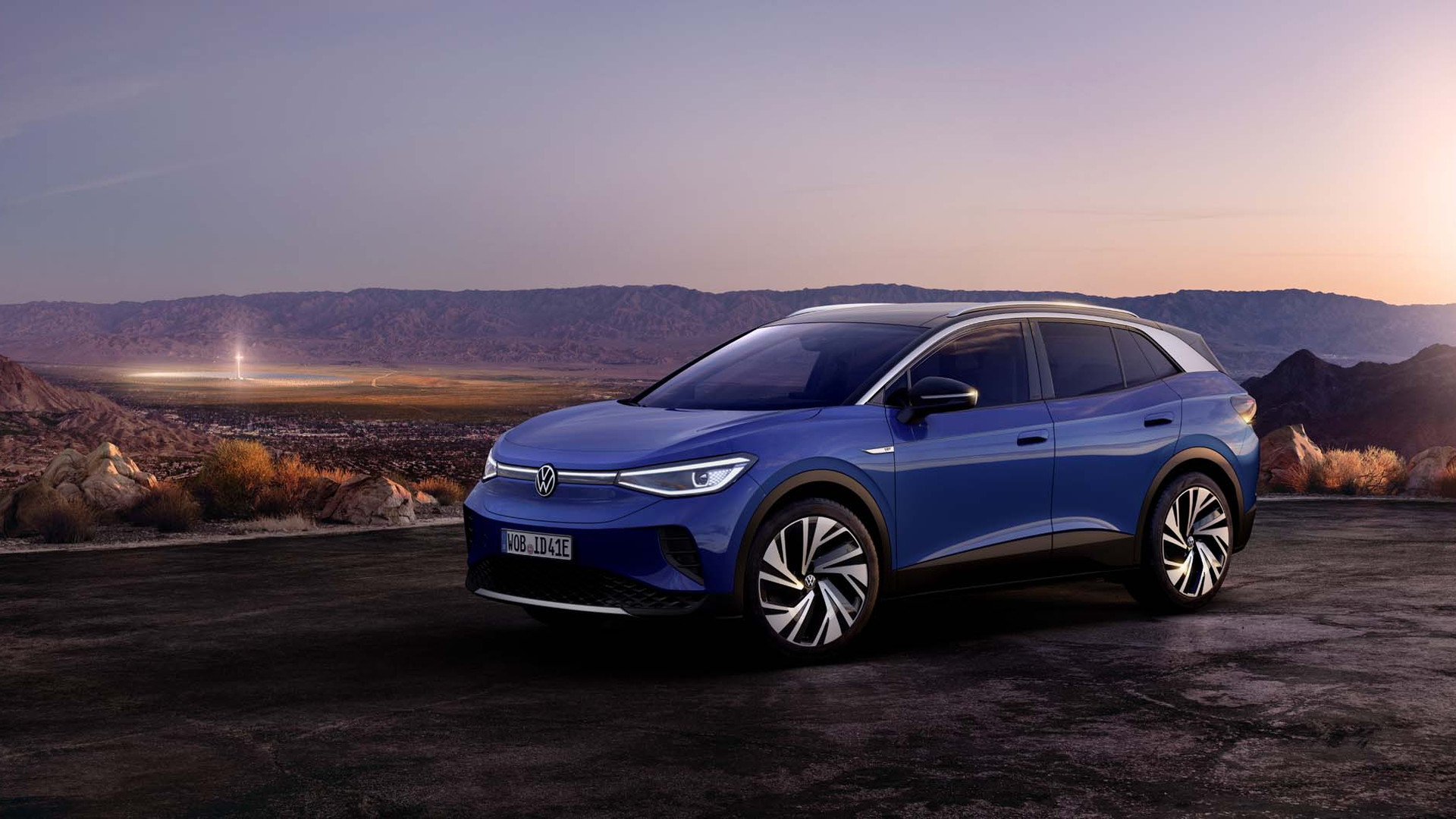 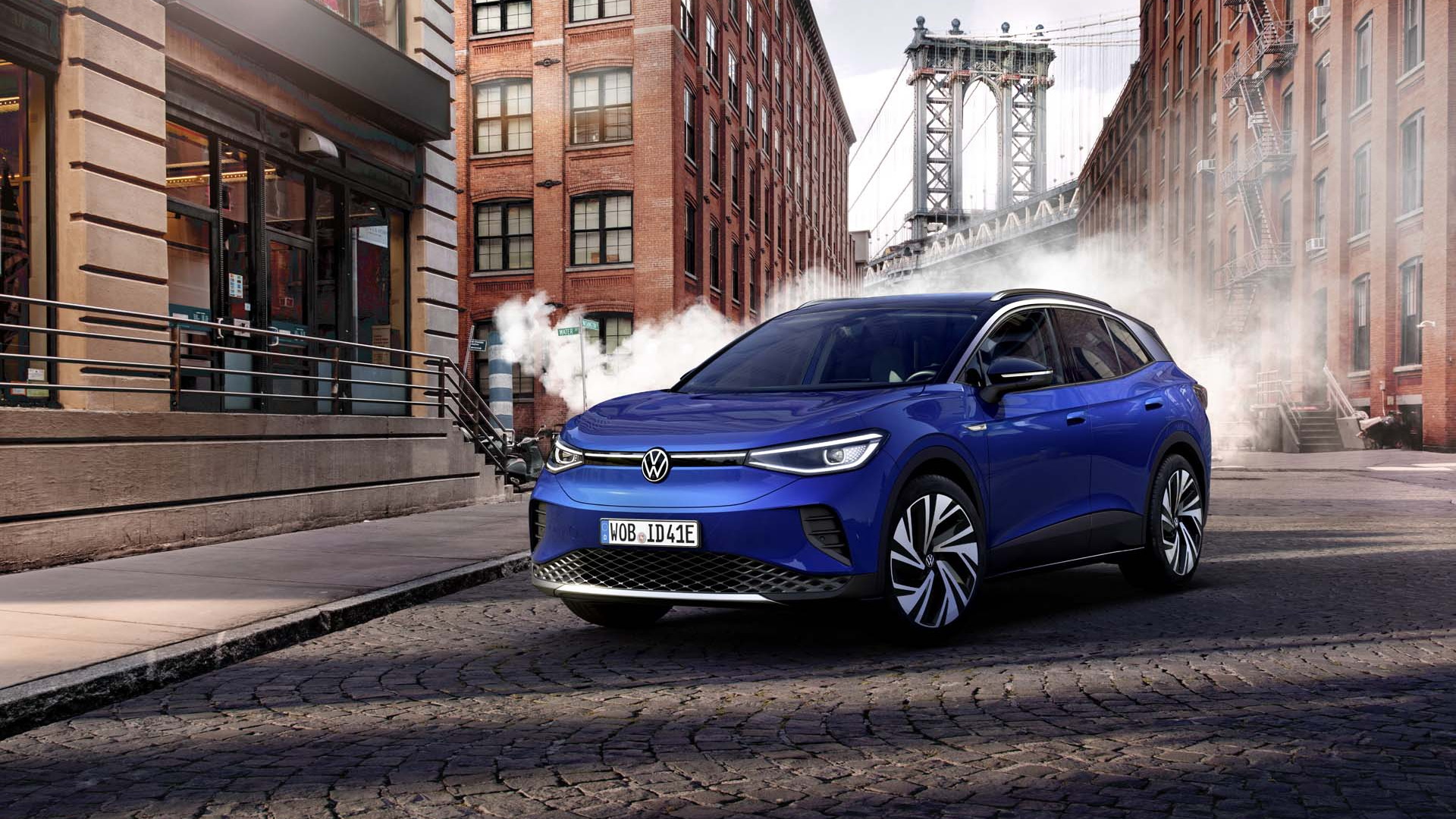 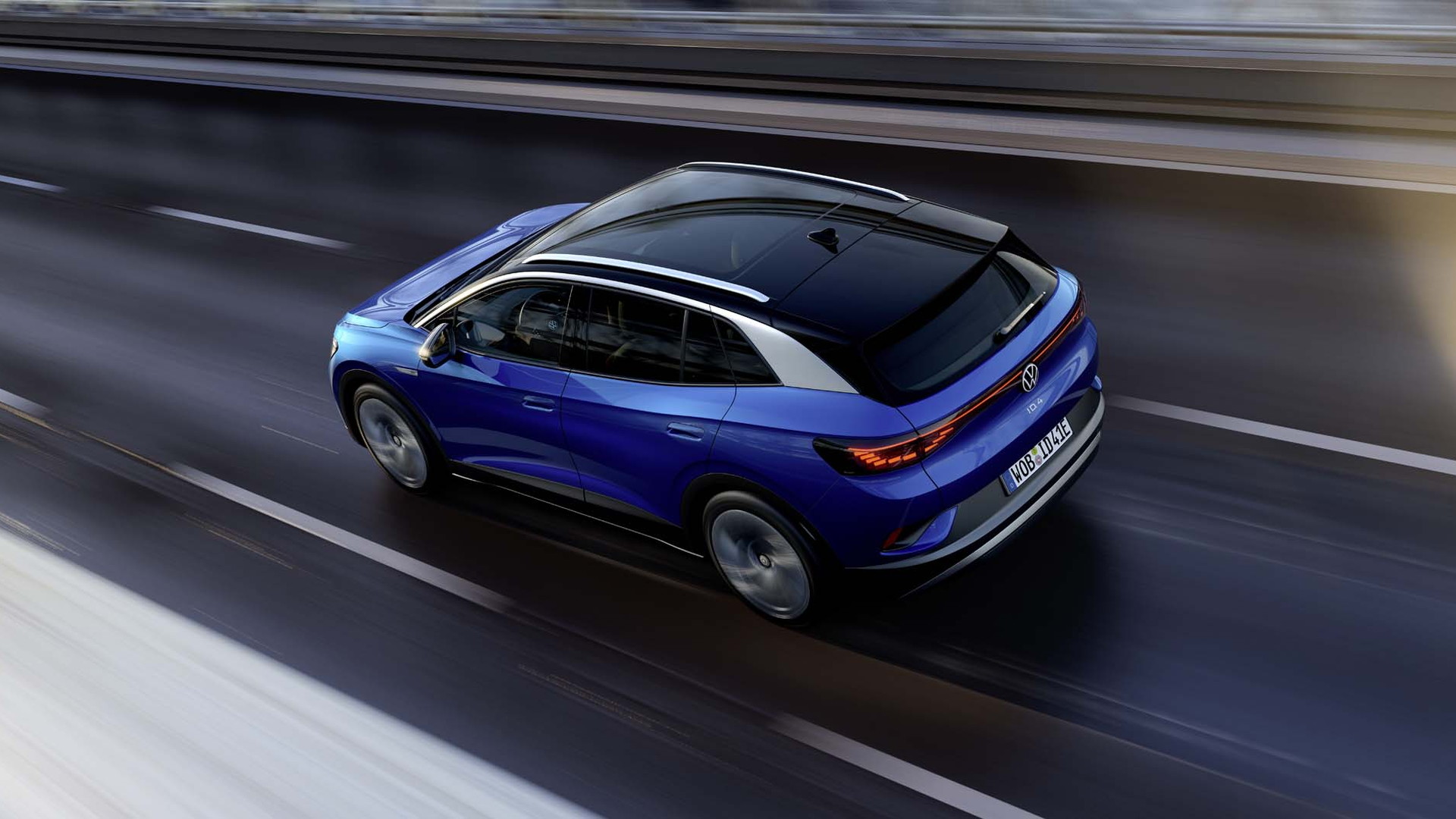 Those who consider Tesla vehicles are likely to encounter the selling point—either from fans or at stores—that their vehicle won’t be out-of-date, and that there’s value in its upgradability over time.

While that argument might help sell vehicles to tech mavens, families are still going to be focused on the hard and fast ownership-cost numbers, which Volkswagen recently outlined is going to be the focus for pitching its upcoming ID.4 electric crossover.

Duncan Movassaghi, the executive vice president of sales and marketing at Volkswagen of America, said in a presentation to the press earlier this month that two things were top-of-mind as VW brought the ID.4 to market. Firstly, it wanted this to be an accessible product that made sense in the day-to-day life of the average American family. Secondly, the package needed to be without compromise. 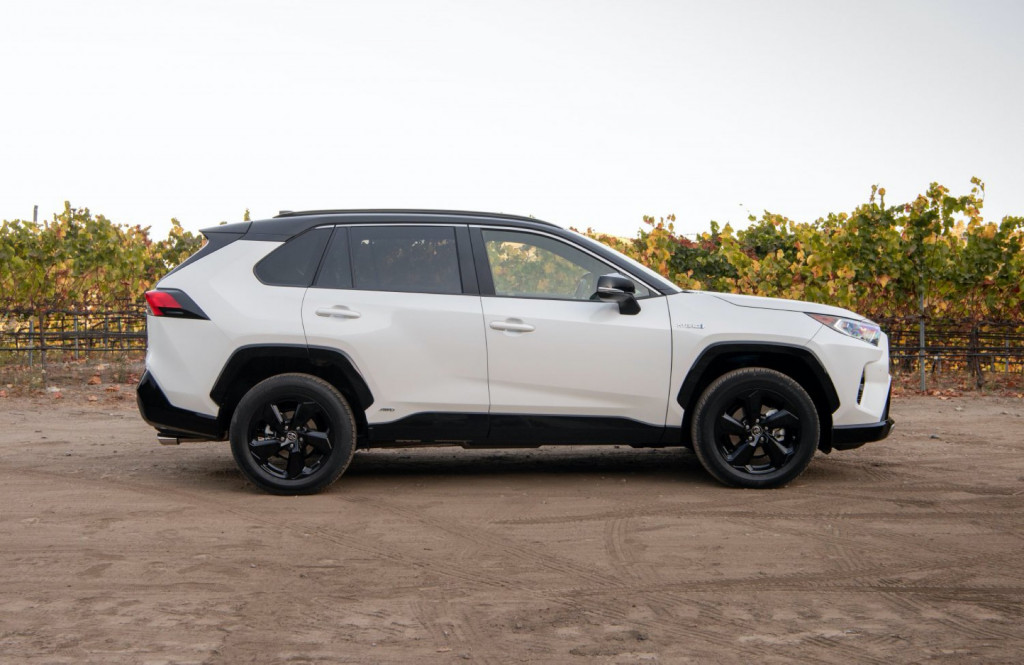 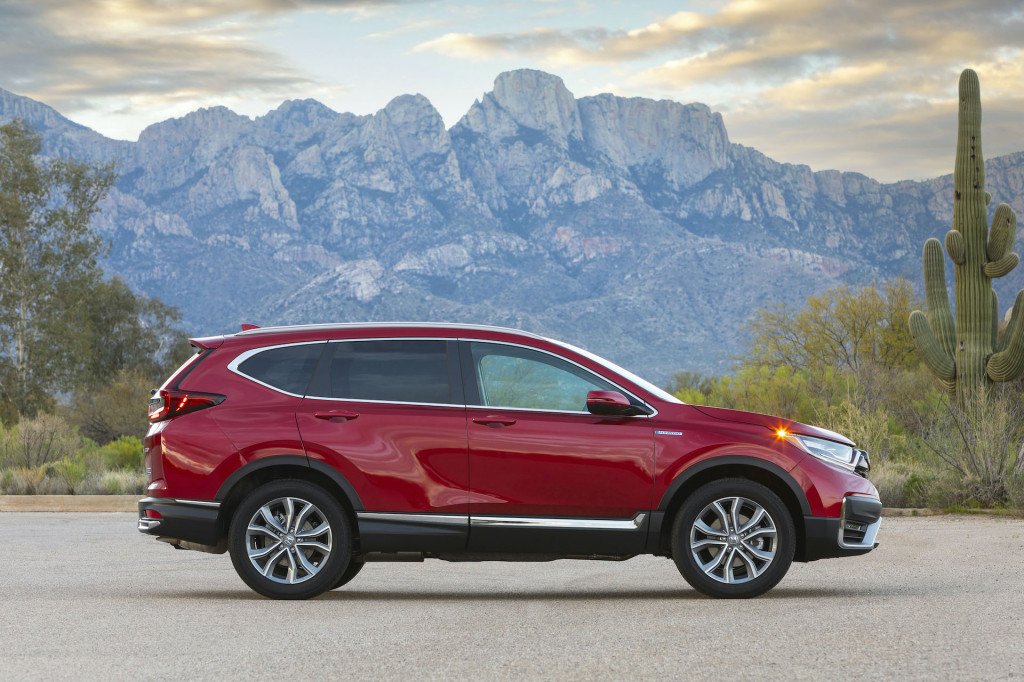 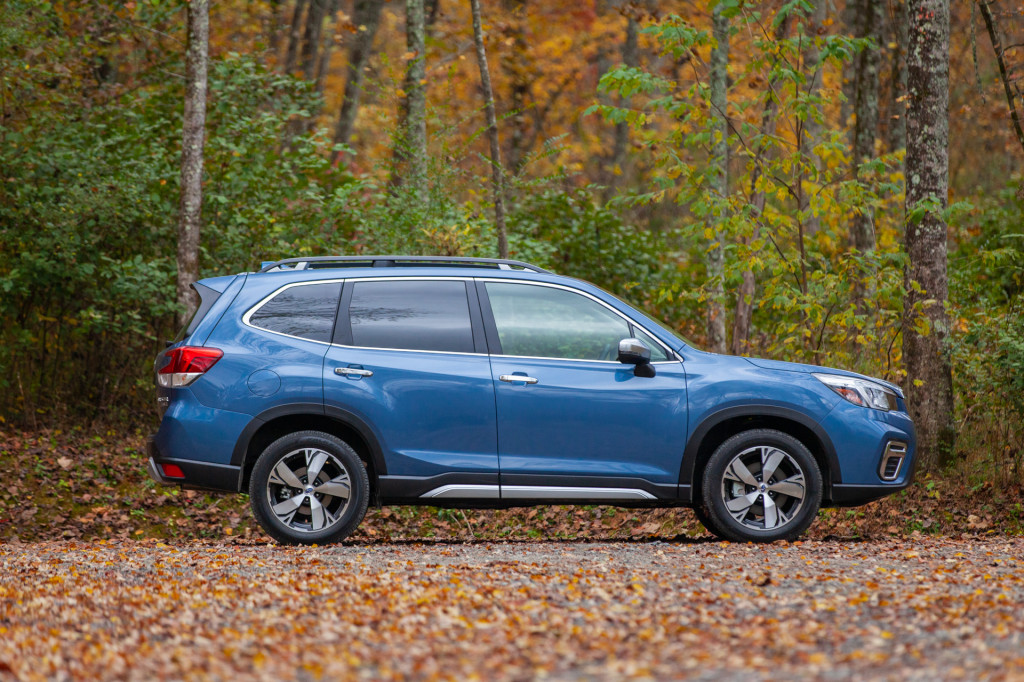 So rather than bringing the ID.3 hatchback to the U.S., VW aimed the ID.4 directly toward one of the most popular segments of the market—and family-friendly compact crossovers like the Honda CR-V, Toyota RAV4, and Subaru Forester.

“Critically, we had to get it in at a price point that was really going to work for the average family,” Movassaghi said.

That involves familiarizing oneself with the idea that it’s not an entirely straightforward calculation for EVs, and that many of the benefits aren’t apparent in the ID.4’s sticker price.

According to data gathered for Volkswagen, about 30% of people considering a mass-market compact SUV are also considering an electric vehicle. 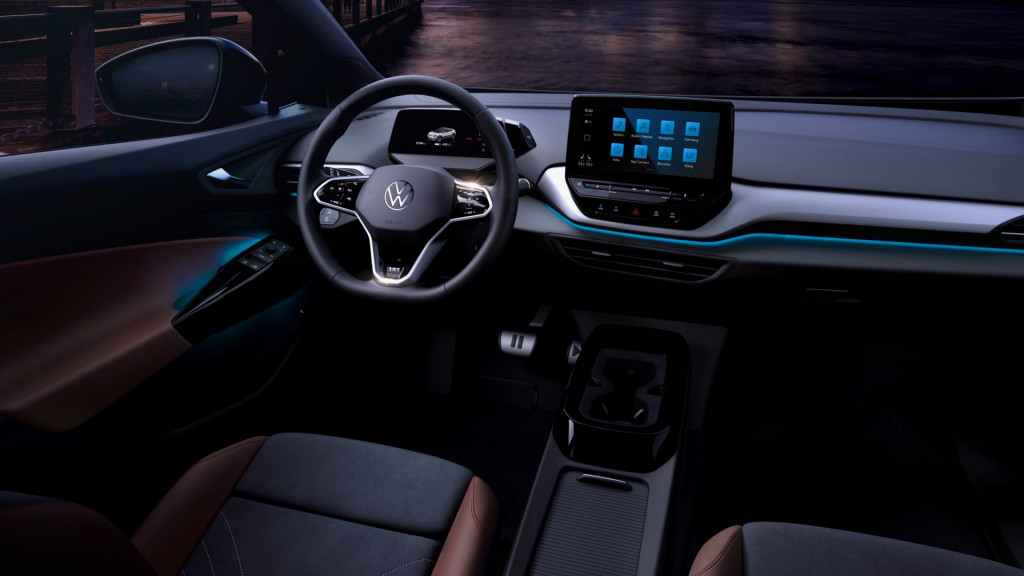 Without making potential customers go glassy-eyed over fuzzy math about full self-driving, or the potential value added if the vehicle were to become a robotaxi, Volkswagen has a lot of work cut out for itself in just familiarizing shoppers with how a $40,000 EV might, apples to apples, cost the same up front—and less over the long run—than a $30,000 equivalent gasoline model.

From a purchase standpoint, the ID.4 starts at $41,490, including its $1,195 destination fee. Although that’s definitely more expensive than comparable versions of those other conventional gasoline models, most buyers will be able to claim the $7,500 federal EV tax credit, bringing the effective price down to $33,690.

And that’s before other state incentives that might apply. VW said it’s working with its dealerships to present some of this math in an easy-to-digest form.

With the additional $1,500 cash-on-hood incentives for EVs just introduced in California, the incentives come close there, at potentially $3,500 in state incentives plus the tax credit.

On the leasing side, VW is planning on a $379-a-month lease, nationally available and based on 10,000 miles per year. That’s a starting point. Depending on the state, those who lease might be able to claim state incentives—like a $2,000 state credit in California or New York, or $5,000 in New Jersey. 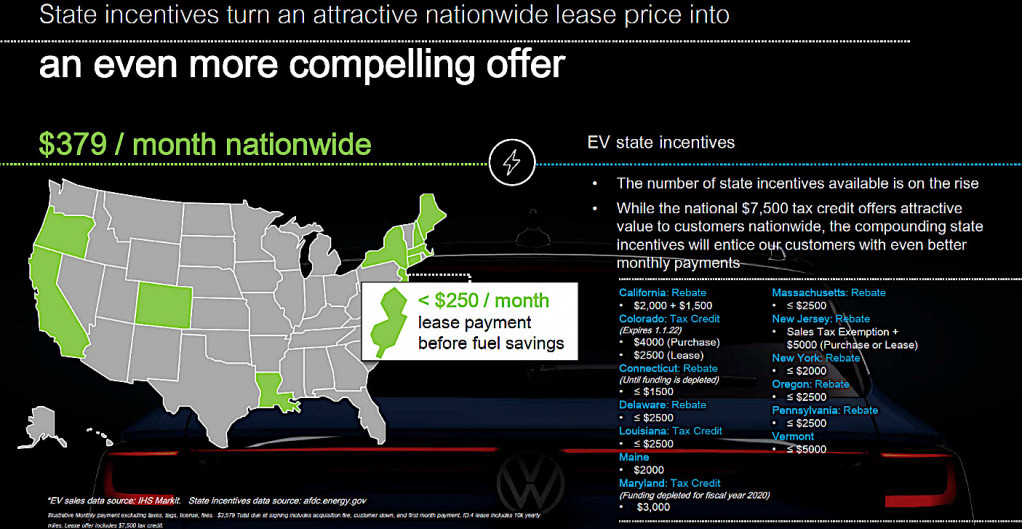 “And that really starts to open this up into an entirely different segment of buyer,” said Dustin Krause, director of e-mobility at Volkswagen of America. “So particularly in a market like New Jersey, I think, you know, we can compete with cars that are thousands and thousand dollars less than our base price.”

Past the initial costs of getting in, Volkswagen is focusing on the traditional ownership-cost equation and how it changes. The ID.4 includes a four-year basic vehicle warranty, plus 8 years on the battery and two years of maintenance, via its network of 650 dealerships. 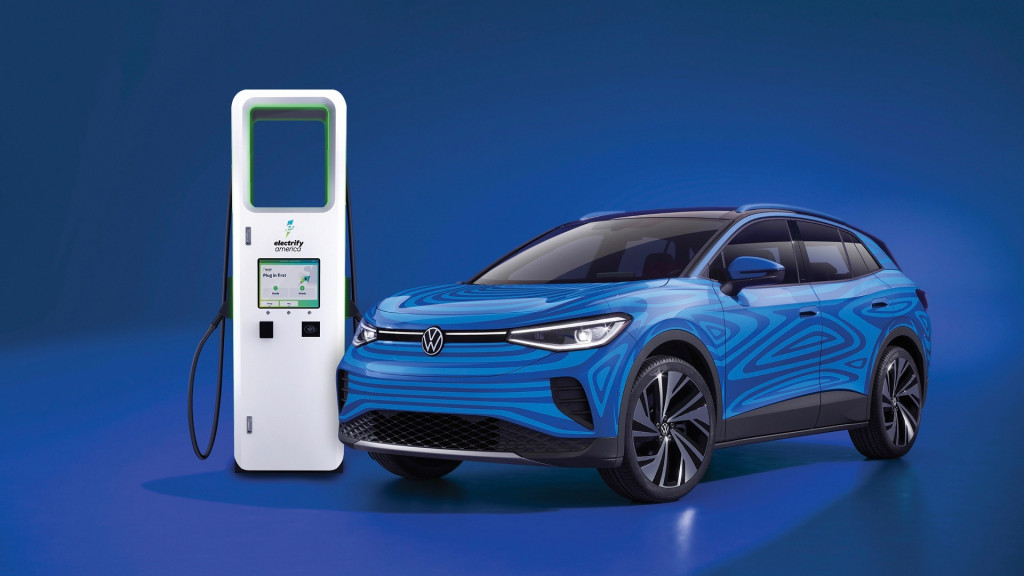 The ID.4’s 250-mile EPA-rated range should cover most of the concerns that shoppers might have about moving to an EV. Additionally, the ID.4 is the only affordable EV that offers unlimited DC fast-charging—on the Electrify America network, for a total of three years (only for the original owner).

How do you keep all these things up front at the dealership? Although VW is training everyone on how to sell EVs, it will have one “genius” within each store who understands “everything EV”—including the often complicated math around incentives, how to claim them, and how to get the most out of them.

The vehicle itself is also shaping up to be an easy sell. According to Krause, part of the intent behind the ID.4 was to make it an “inherently familiar” vehicle despite the different tech on board. At the same time, the aim was to make it a standout in styling. “If you just look at the ID.4 versus the Forester and CR-V, it’s like a very futuristic spaceship compared to what looks a bit like an everyday car,” he said. 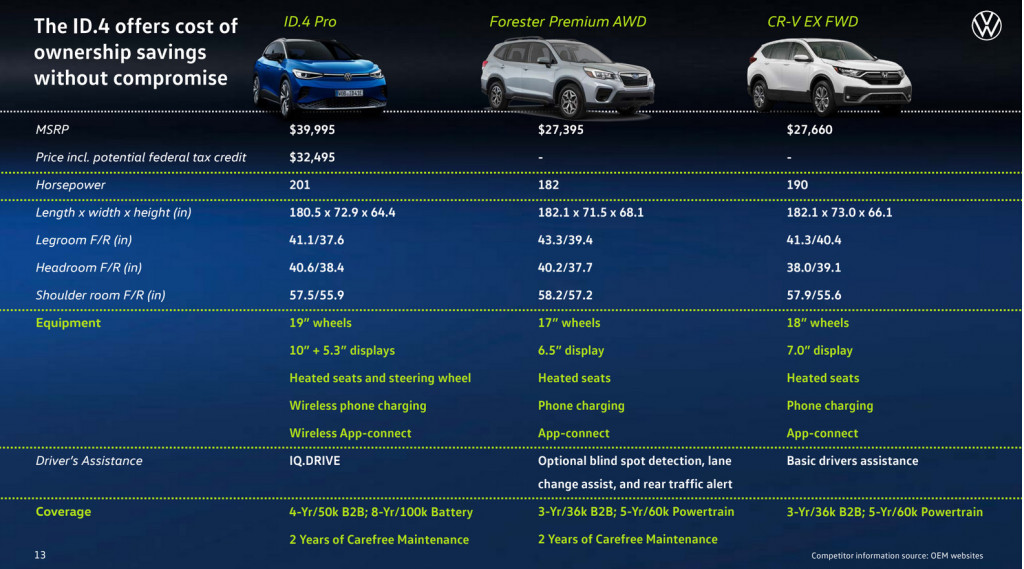 Over the long run, VW does plan to include more of the points you might hear from the Tesla crowd. “At a global level, our company is working on those concepts, and over time, I think more and more you'll see that as part of what we bring to market,” said Movassaghi.

Toyota sold nearly 450,000 RAV4 models in 2019—its best-selling hybrid—and the class as a whole when including the Honda CR-V, Toyota RAV4, Nissan Rogue, Subaru Forester, Ford Escape, Jeep Cherokee, and Chevy Equinox adds up to more than 2 million annually. It’s fair to say that by pushing its EV into mass-market contention, VW has its eyes set on a very big prize.