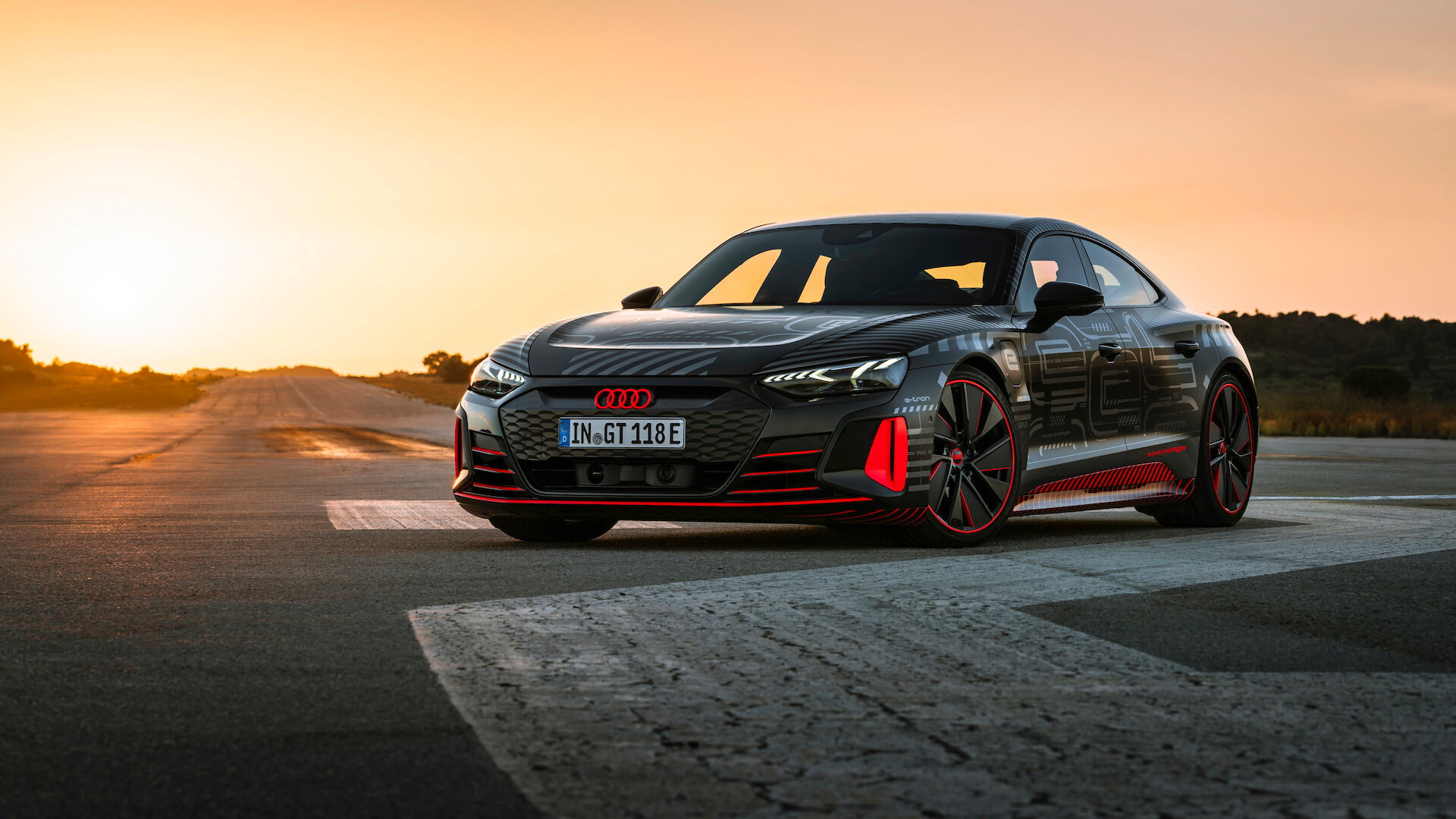 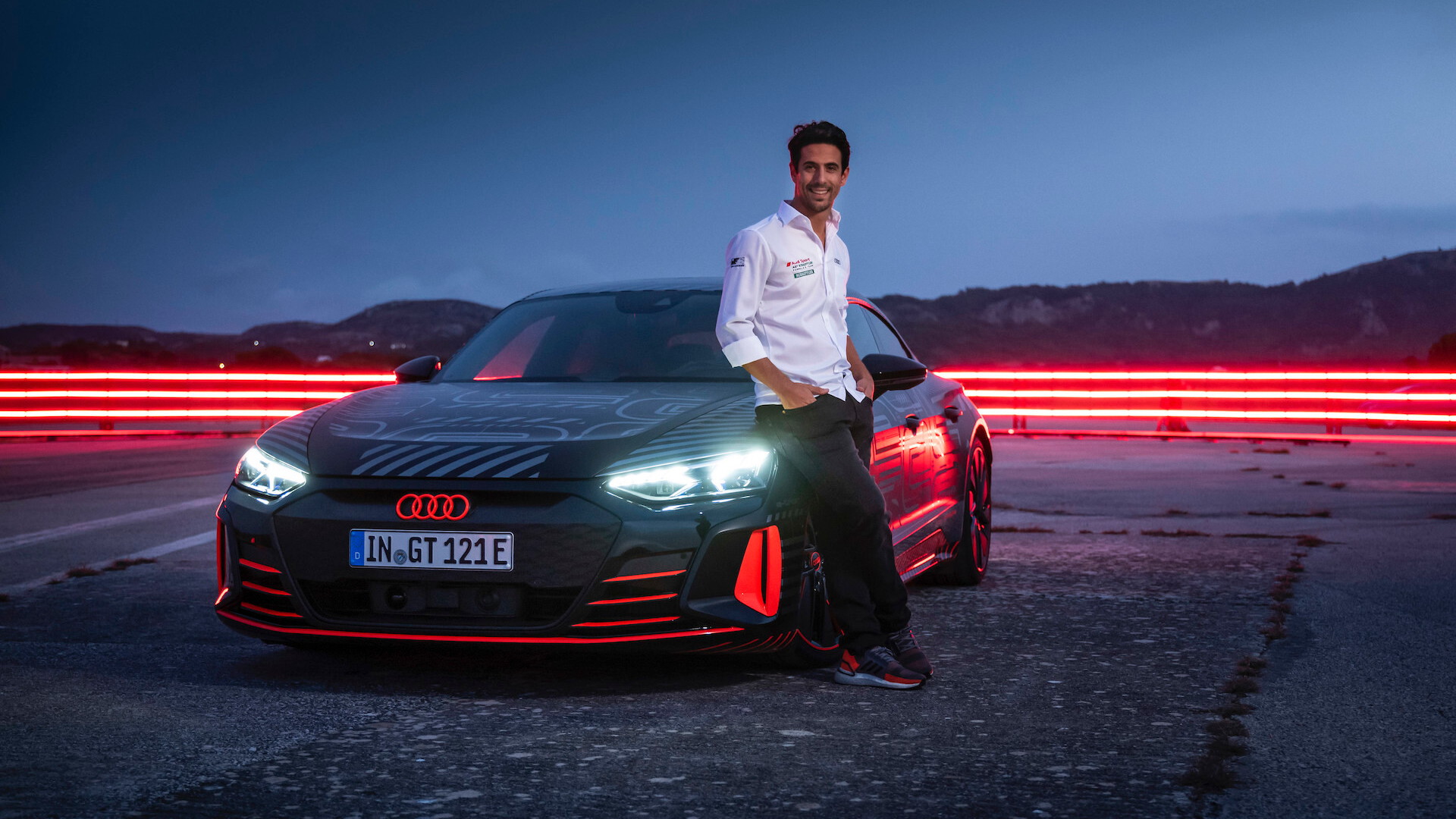 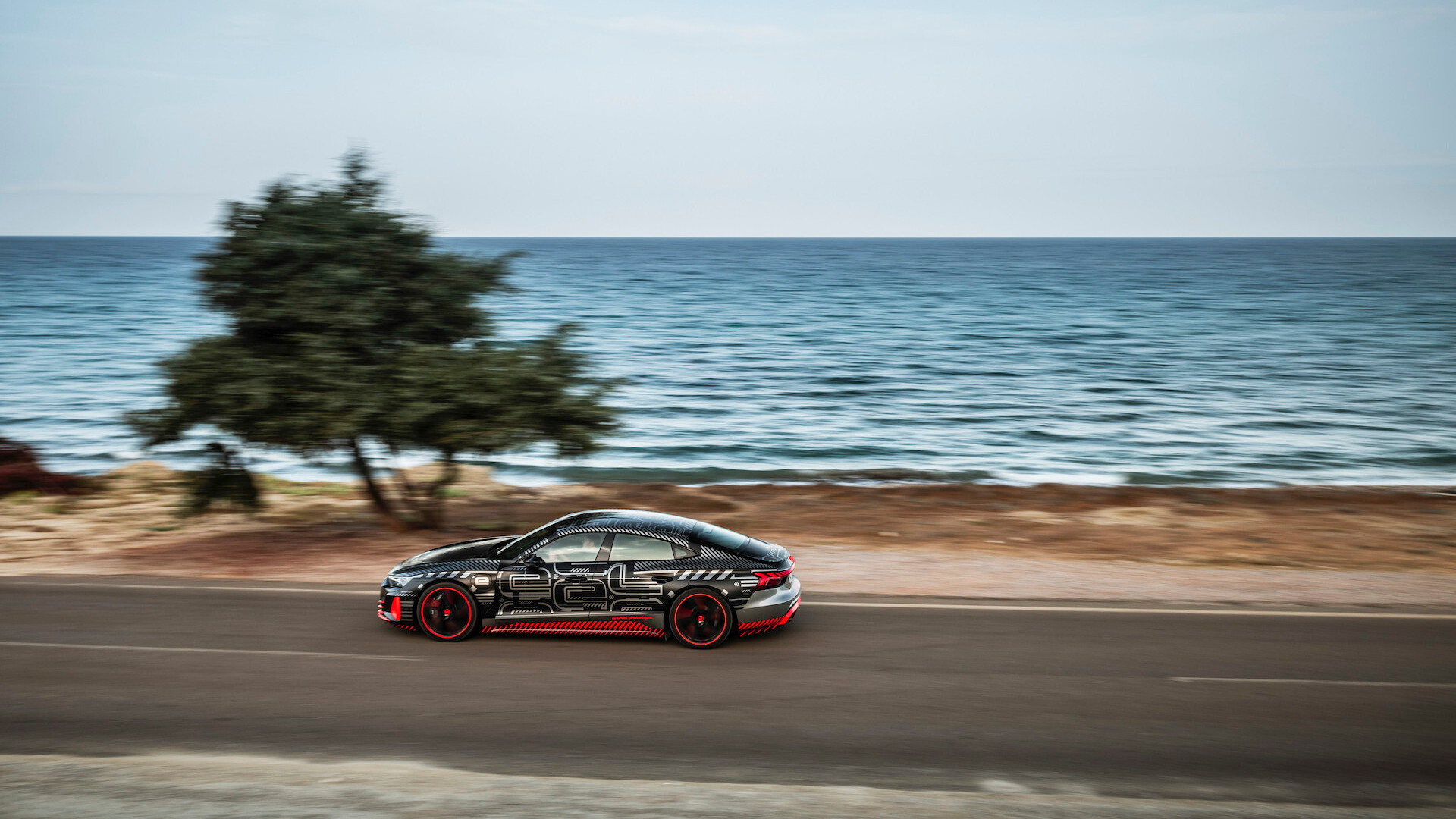 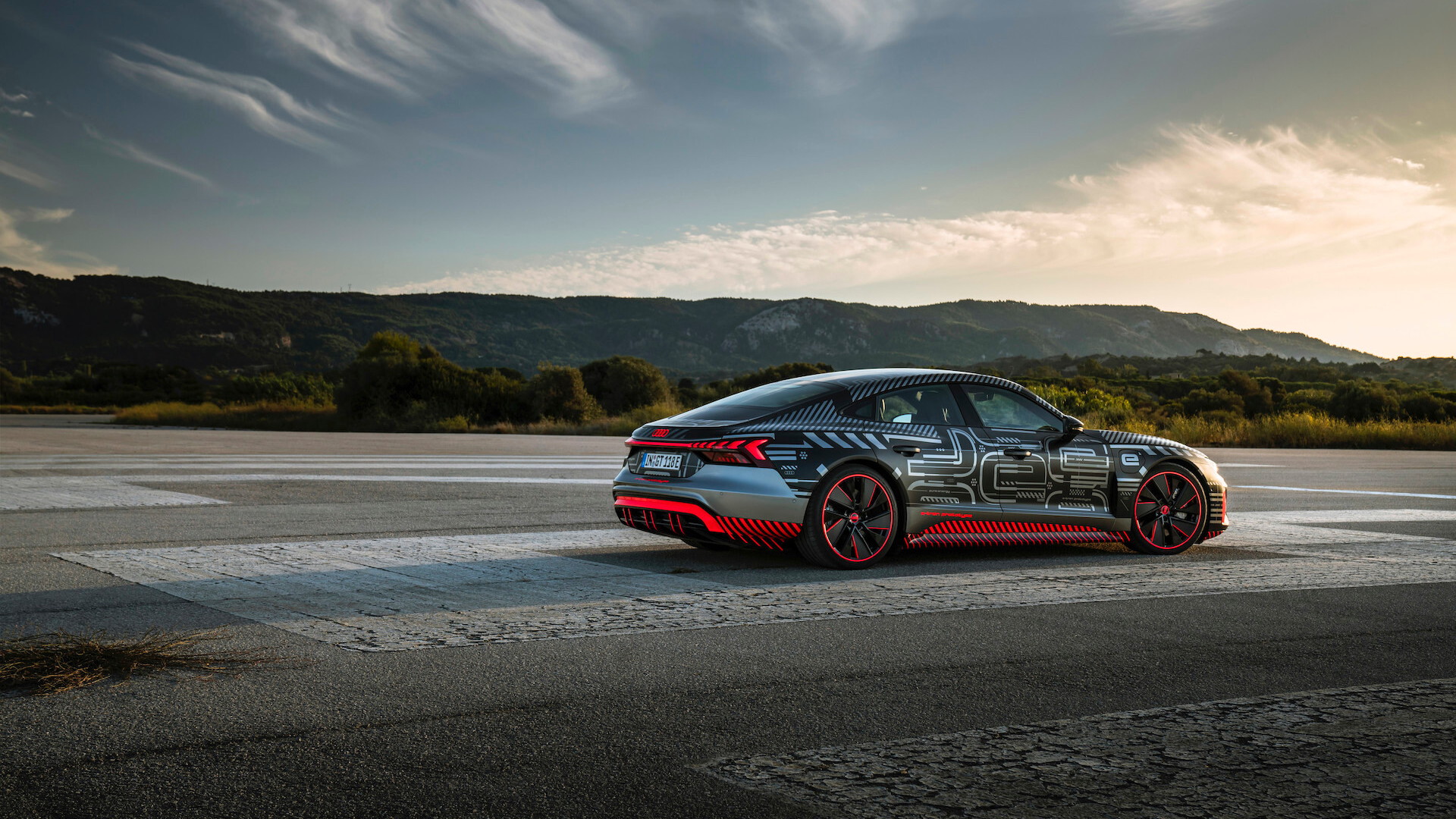 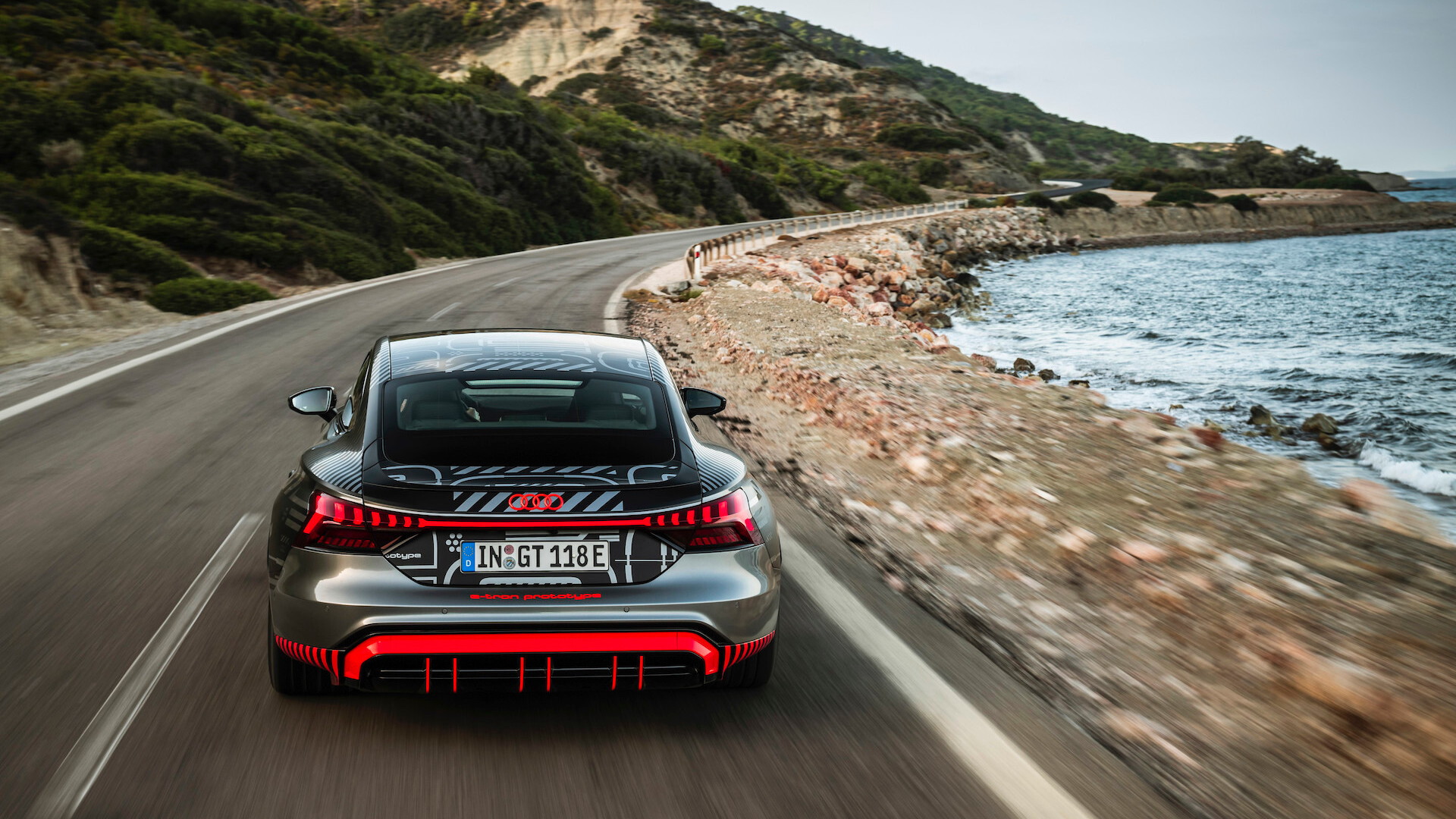 Audi on Thursday revealed a few more details about the Audi E-Tron GT, though it won't fully be revealed until early 2021. For now the electric performance flagship's distinct design and styling follows Audi’s own performance path and veers away from the closely related Porsche Taycan.

The GT was developed and prepared by Audi Sport and will be sold with the performance-focused RS badge. Made alongside the Audi R8 on Audi’s own line at Böllinger Höfe, Germany, the model will be “the sporty flagship of the electrification strategy at Audi,” according to Audi Sport managing director Julius Seebach. “It paves the way into the all-electric RS world and it is our commitment to the company’s CO2 target.”

Although Audi notes that these two vehicles ride on the same 800-volt platform, called J1, and that they were developed at the same time, the tuning of each model was done independently by each brand.

Like the Taycan, the E-Tron GT will offer rear-axle steering that helps boost maneuverability at low speeds while improving stability at higher speeds. Its three-chamber air suspension, which is tuned to be softer in Comfort mode and firmer in its Dynamic setting, allows nearly 2.0 inches of variability in ride height.

Propulsion specs haven’t changed that much since Audi showed the GT in thinly veiled concept form in 2018. A 235-horsepower front motor and 449-hp rear motor together make 590 hp—or up to 640 hp in an overboost mode.

The front motor has a single-speed reduction gear, while the rear motor has its own 2-speed gearbox, in what sounds like the same hardware from the Taycan. The unique 2-speed setup should allow strong, consistent launch characteristics, and an official 0-60 mph time of 3.5 seconds.

The GT has two coolant circuits running at different temperature levels—a cooler one for the battery pack and a warmer one for the motors and power electronics. There are also cooling and heating circuits for the interior.

Between the four circuits, a series of valves allow the systems to be flexibly interconnected, to function as a heat pump for the interior. The potential of the cooling systems is most used during high-performance driving, or during the highest-power DC fast charging, where the GT, like the Taycan, can reach 270 kw.

To access that peak charging rate, a route planner in the GT’s navigation system starts preconditioning the battery so as to match the charging capacity of the anticipated charge connector.

Steel discs are standard, with a tungsten carbide coating optional. The RS model will have carbon fiber ceramic brakes with 10-piston calipers. Wheels will range up to 21-inchers, but Audi says that the 20-inch wheels are the best for aerodynamics and the 19-inch ones for the front wheels weigh the least, at about 50 pounds each.

We also expect many of the sensory pieces of the driving experience to be inspiring in Audi’s own signature way. For instance, last month the brand outlined how it had developed its own distinct sound for the GT.

With its influences from Audi Sport and Formula E racing, the E-Tron GT promises to be the halo car where all-electric and performance cars meet. Audi was the first German automaker to enter Formula E, in 2017, and it says that motorsports will play a key role in the electric transformation.

Audi’s family of fully electric E-Tron vehicles is set to grow significantly just next year with the introduction of the Audi Q4 E-Tron SUV and Sportback, in addition to the GT. In all, it plans to launch about 30 electric vehicles and plug-in hybrids by 2025.