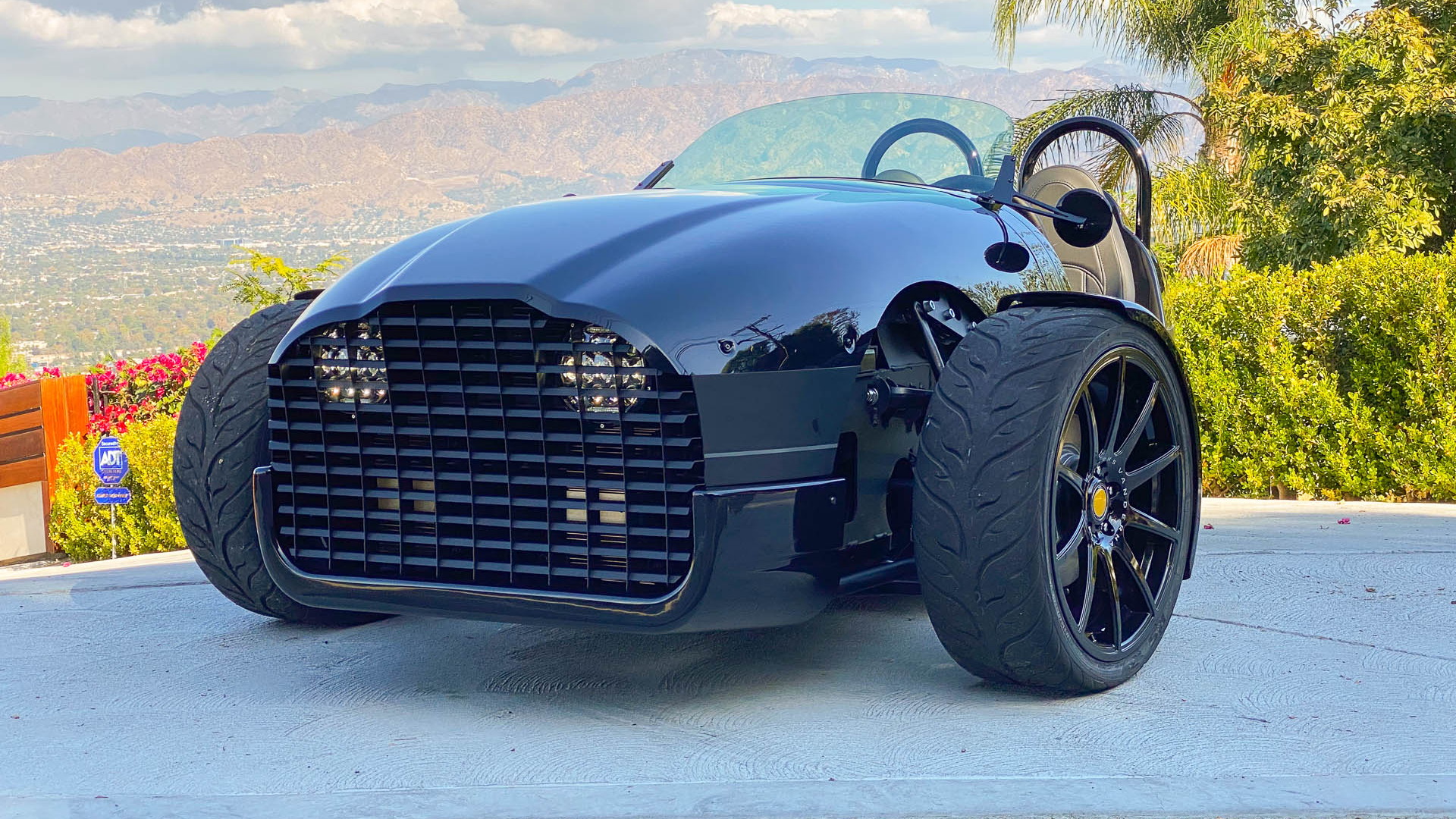 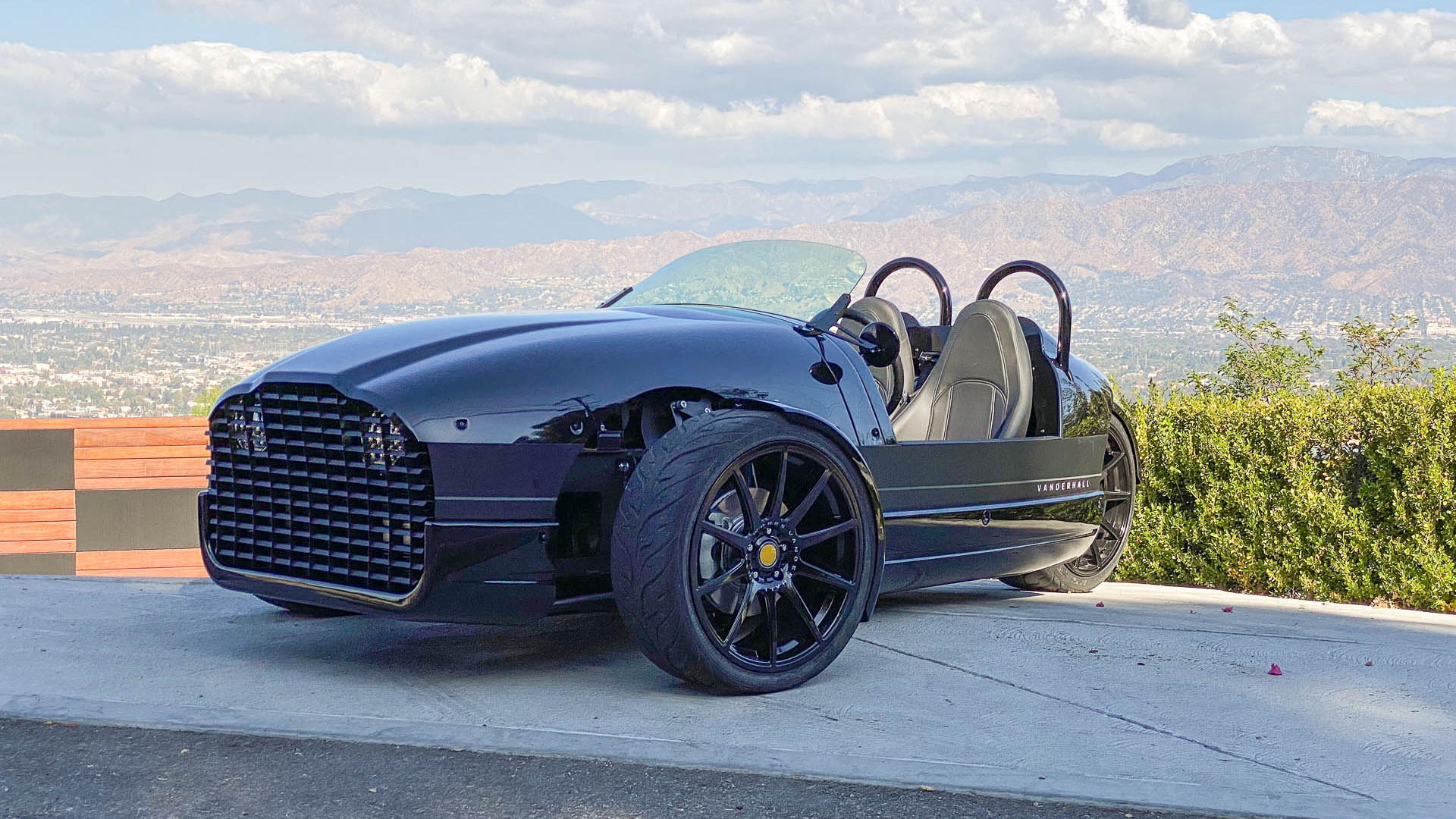 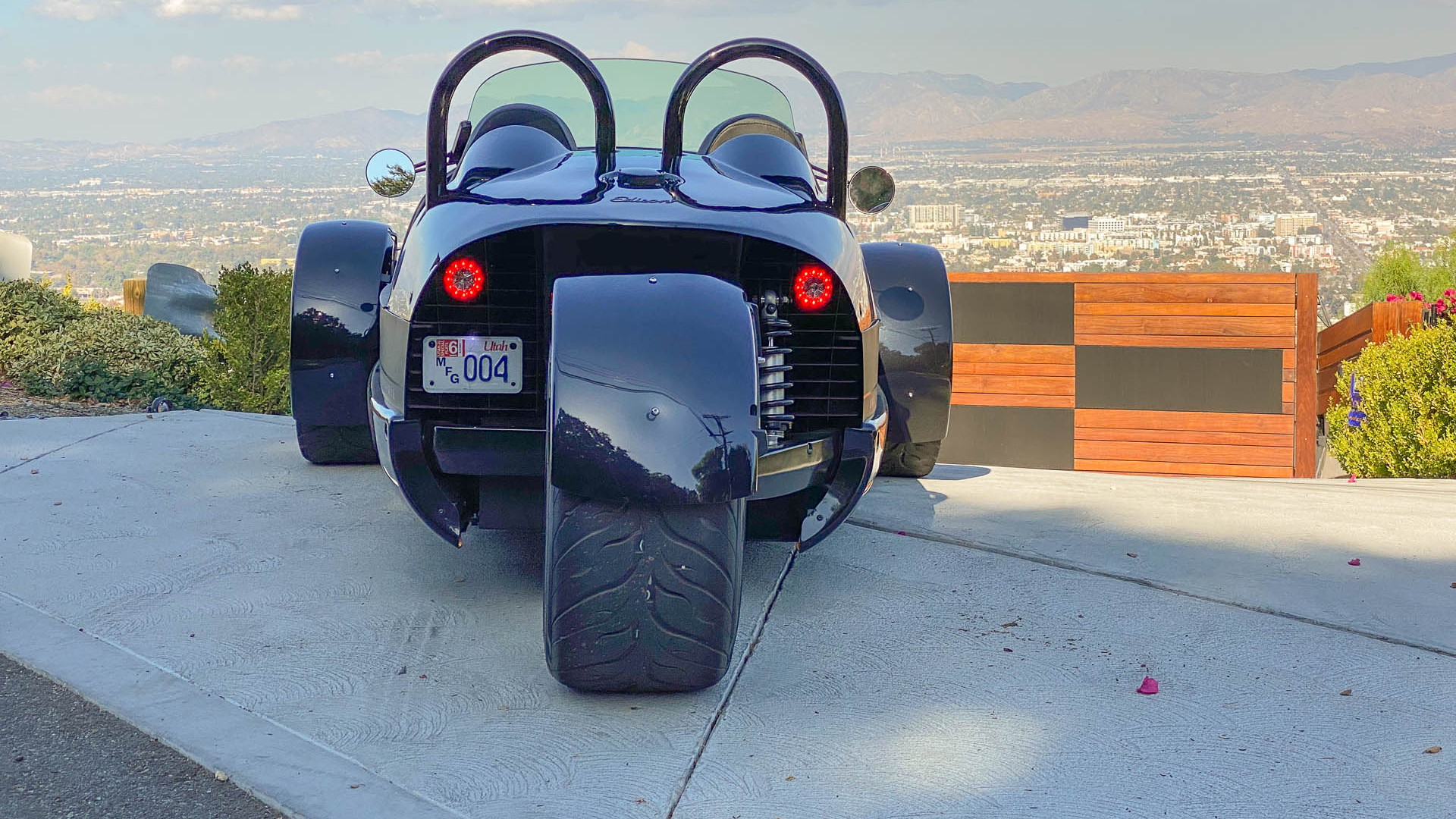 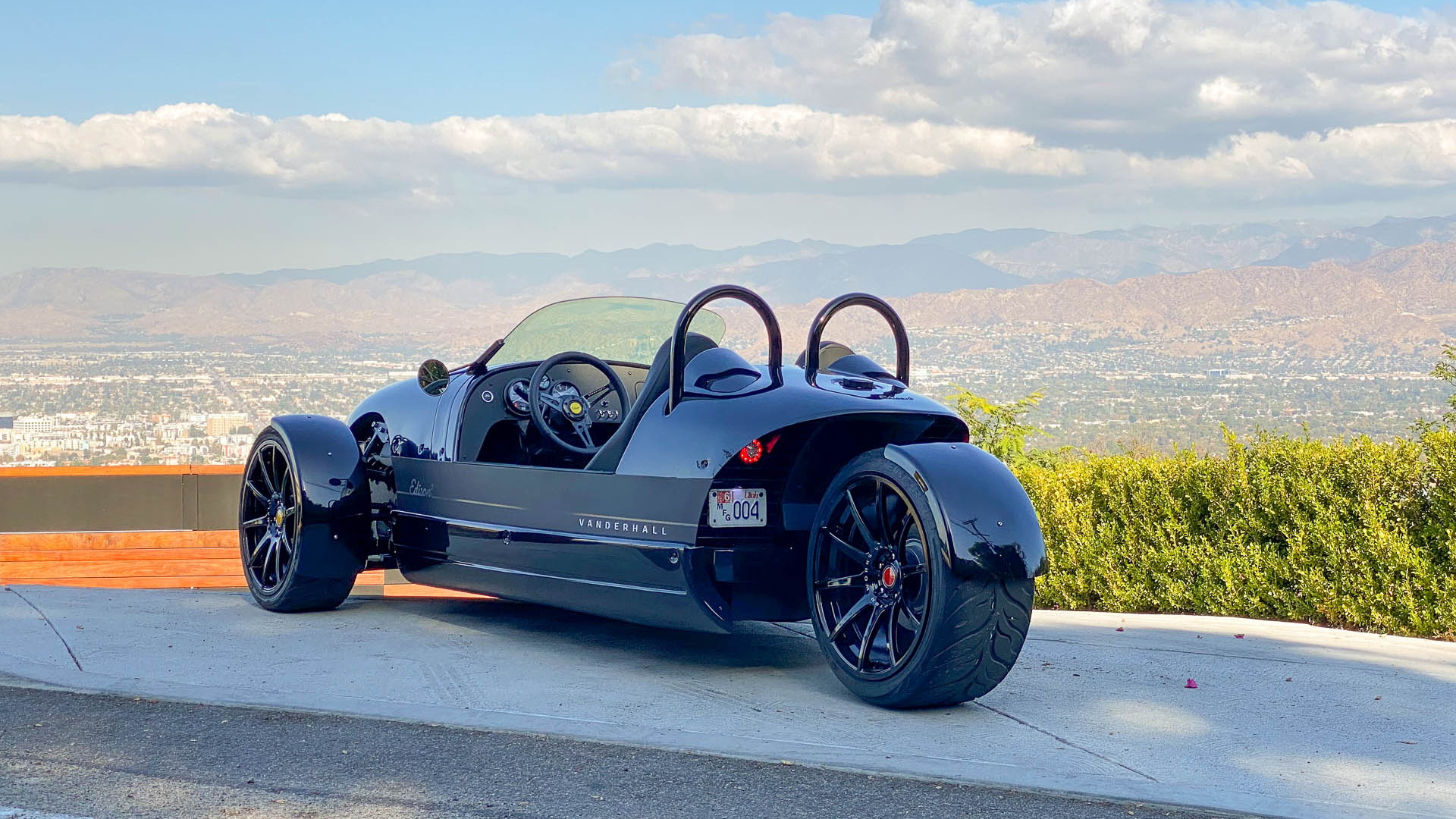 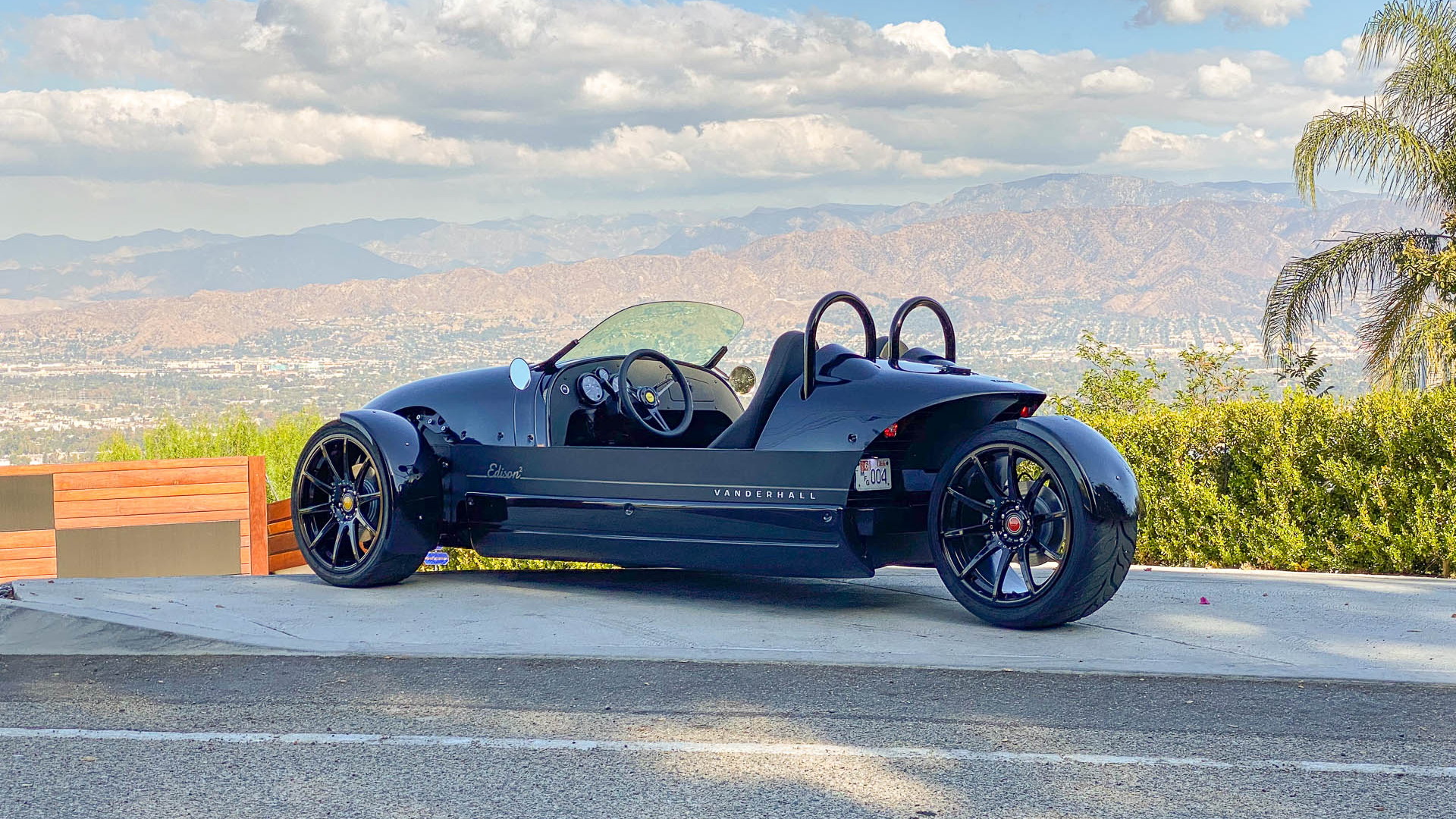 Planes, trains, automobiles and, even ships: No segment will be left untouched in the march towards a greener, more sustainable future—and going electric.

Even a boutique company out of Utah that builds three-wheel playthings sees the writing on the wall. When the all-electric Vanderhall Edison 2 three-wheeler hits dealer lots in the third quarter of 2020 it will be the company’s third model line and will cost $34,950.

Air cooled, but not simple

The Edison’s powertrain is entirely air cooled. The front-mounted 28-kilowatt-hour battery pack powers two 52-kilowatt electric motors. Each motor is individually connected to a front wheel via a belt-driven setup with a planetary gearset mounted to the front wheels.

Combined, the entire setup is good for about 140 horsepower and 232 pound-feet of torque. It’s not EPA-rated, but Vanderhall said it’s good for about 200 miles of real-world range including up and down canyon roads.

At a Level 2 charge point it will take about four hours to fully charge the Edison's battery with its 6-kw onboard charger. That increases to 11-18 hours on Level 1.

Push the start button and there’s no drama. No noise. No fun animations on the non-existent screens. With no transmission, just its direct-drive setup, there is no true way to put the Edison in park. The gear selector allows for neutral, reverse, and drive. Never forget the parking brake.

As I grab the steering wheel and turn the Edison to head out on the streets of Beverly Hills its surprising how heavily weighted the electric power steering system is. At a crawl it takes a smidge of effort to change directions, but once underway the steering is easy to control and provides telepathic feedback as to what’s going on with the wheels. Every manhole cover, every crack, every undulation is felt through the steering wheel from the front’s pushrod suspension.

Between Beverly Hills traffic and timing I only ended up driving 19 miles in the Edison, but it only took two blocks to realize it’s unlike other electric cars I’ve driven. The torque doesn’t hit the wheels instantly despite the direct-drive system. The belt-driven gear reduction setup at the front wheels allows power to come on like a wave—similar to that of an internal combustion engine as one accelerates into the rev band except there’s no pause in the power for gear changes.

A distinct whine comes from the drive system, and it increases as power and speed build. There are no regenerative braking settings to mess with, but the Edison has a fixed amount of regen that seemed to mimic that the drag of an internal combustion engine and progressively decreased the Edison’s speed when letting off the accelerator.

The Edison sits low to the ground, and with little to no bodywork around occupants, they’ll get what can only be described as an open-air treatment. Visibility is perfect with zero obstructions, though if occupants are over 5’10” the windshield height could pose an issue. Manually-operated side mirrors are round and barely do the trick as they vibrate while driving down the road, but they look the part.

The Edison is about the look perhaps more than how it drives—and the design is one of simplicity. The exterior body is smooth and there are no old-school buckles on the hood to open things up, it’s fixed in place with bolts. Vanderhall doesn’t believe its customers will want to open the Edison up and mess with things according to Vanderhall spokesman Daniel Boyer.

Inside the throwback dashboard in my Edison was a simple black affair with three gauges (speedometer, battery meter, and power meter with an electric motor temp gauge inside of the power meter dial), pushbutton start, a metal toggle switch for the hazards and one for the Bluetooth system, a knob for volume and track forward/back, and a glovebox. It’s clean, it’s easy-to-use and read on the move, and it’s attractive. In an era of over-stimulating screens it’s refreshing. Of course the most important bit in the Edison might be the metal switch mounted next to each seat that turns on the seat heaters for those chilly days.

Vanderhall sold about 1,000 (gas powered) three-wheelers last year and expects that number to increase about 2,000 next year. Boyer wouldn’t talk specific volumes for the Edison but expects to sell “hundreds” with most of 2020’s volume finding its way to Europe due to incentives there.

Vanderhall, and electric three-wheelers, do not currently qualify for federal tax incentives due to, as Boyer put it, politics. But for more background, check out Green Car Reports coverage of autocycle rulemaking.

The Edison I drove was the second production model finished just two days before the key fob was placed in my hand. Production is underway now with deliveries slated to begin as soon as dealerships are prepped for service and sales support. Boyer expects that to be before June. The goal is to hopefully have sales kept within a 50-mile radius of dealers that can support the Edison.

When it launches, this model will be badged the Edison 2, with a more luxurious Edison 4 model (based on the premium Vanderhall Carmel model with doors, cruise control, wooden steering wheel and more) in late 2020 or 2021. There’s also room above and below for an Edison 1 and 3, said Boyer.

The Edison isn’t cheap, as it’s not a car one can feasibly daily-drive with no storage to speak of, no top, and little to no practicality for $34,950, but it’s an experience that almost nothing else on sale in the U.S. today can provide with zero emissions and a cool factor that is hard to beat.