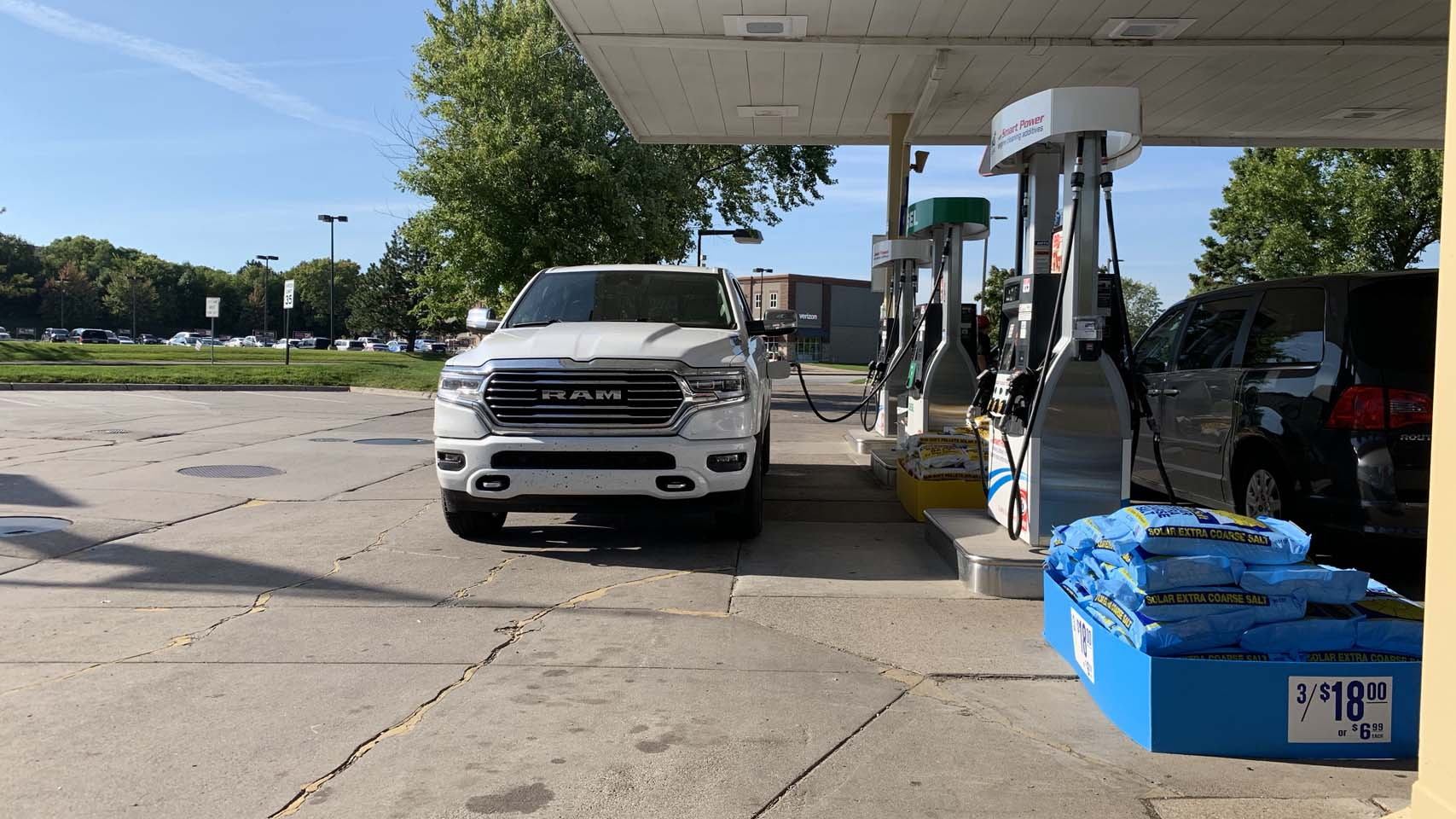 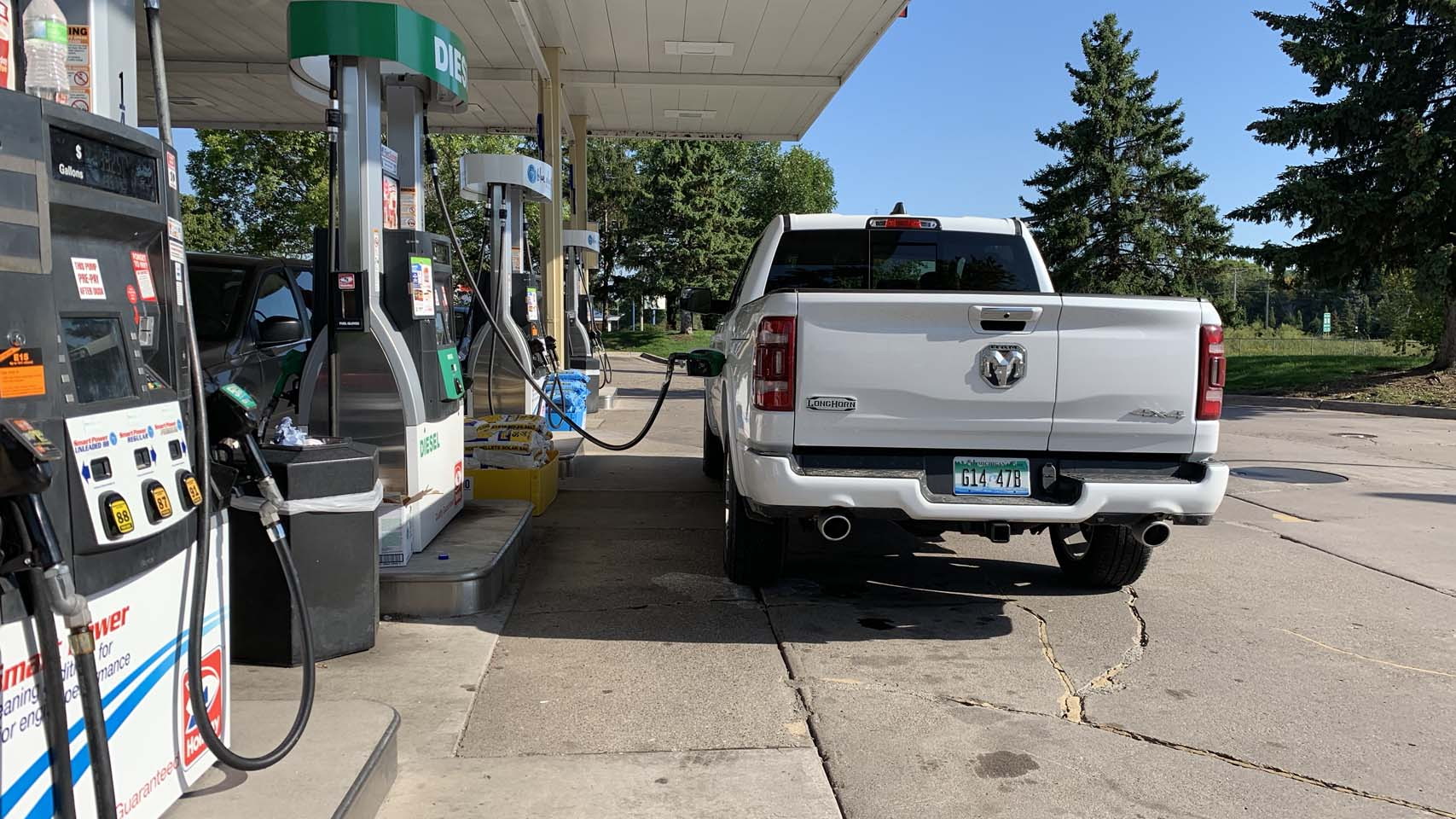 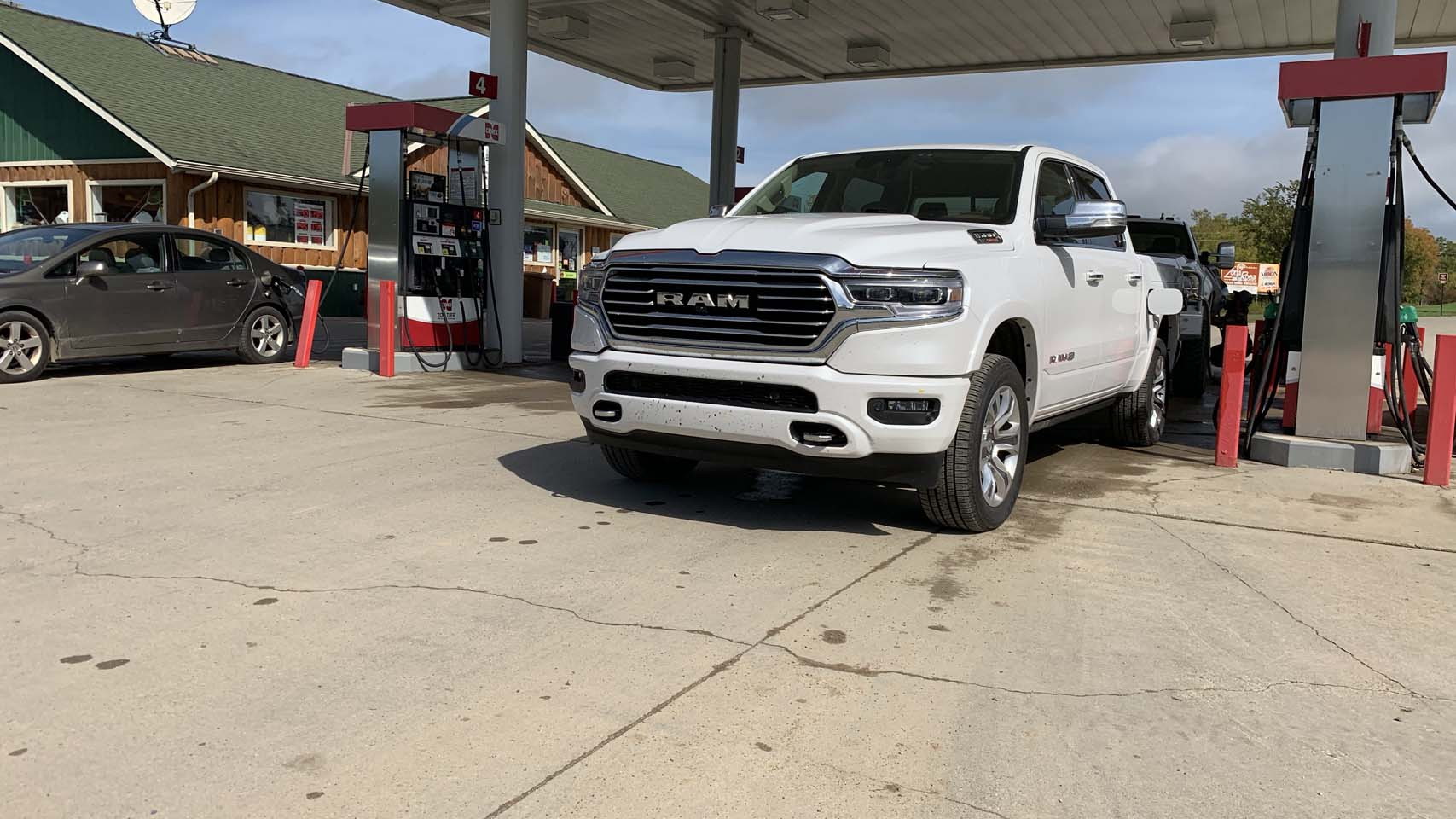 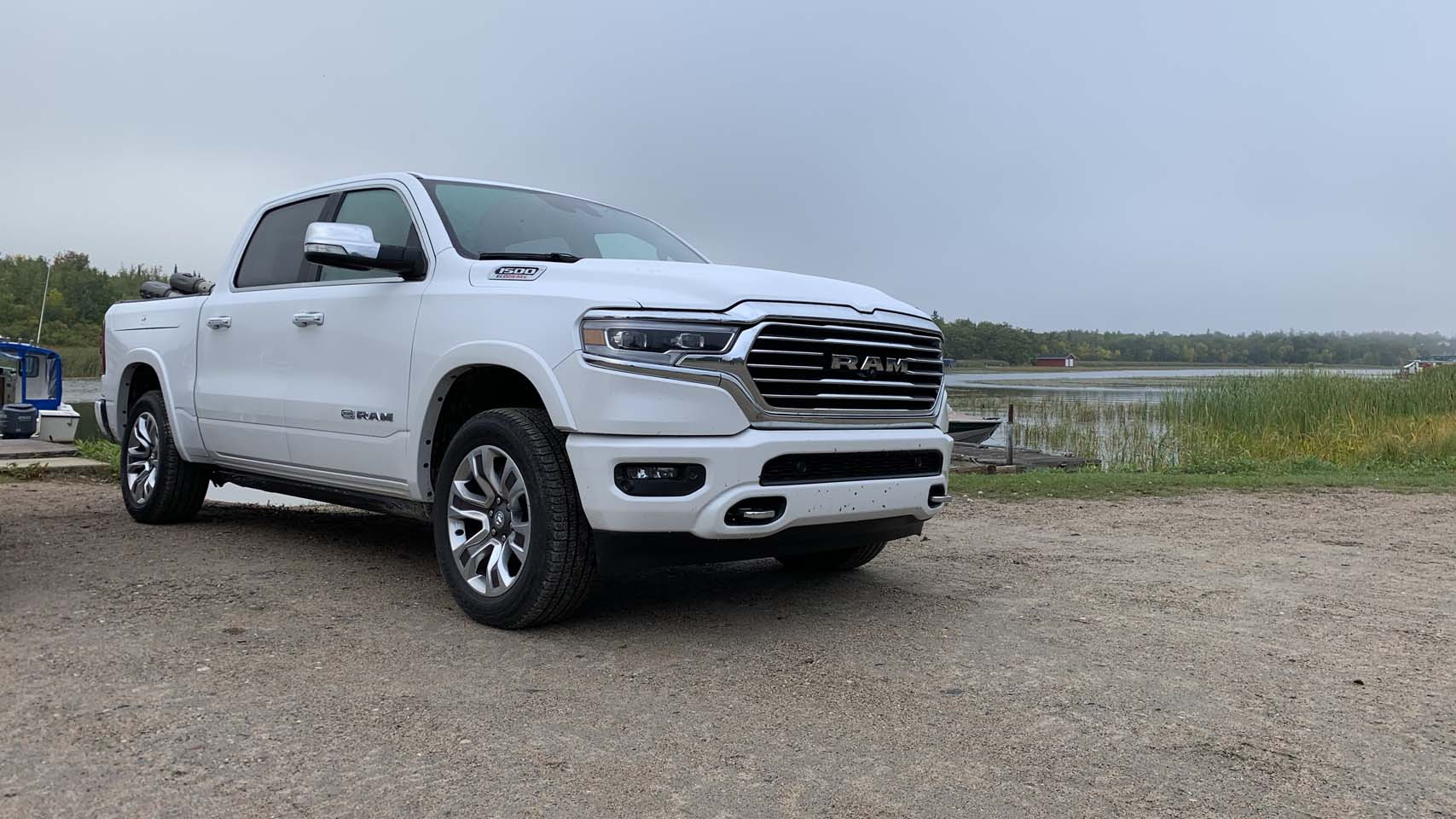 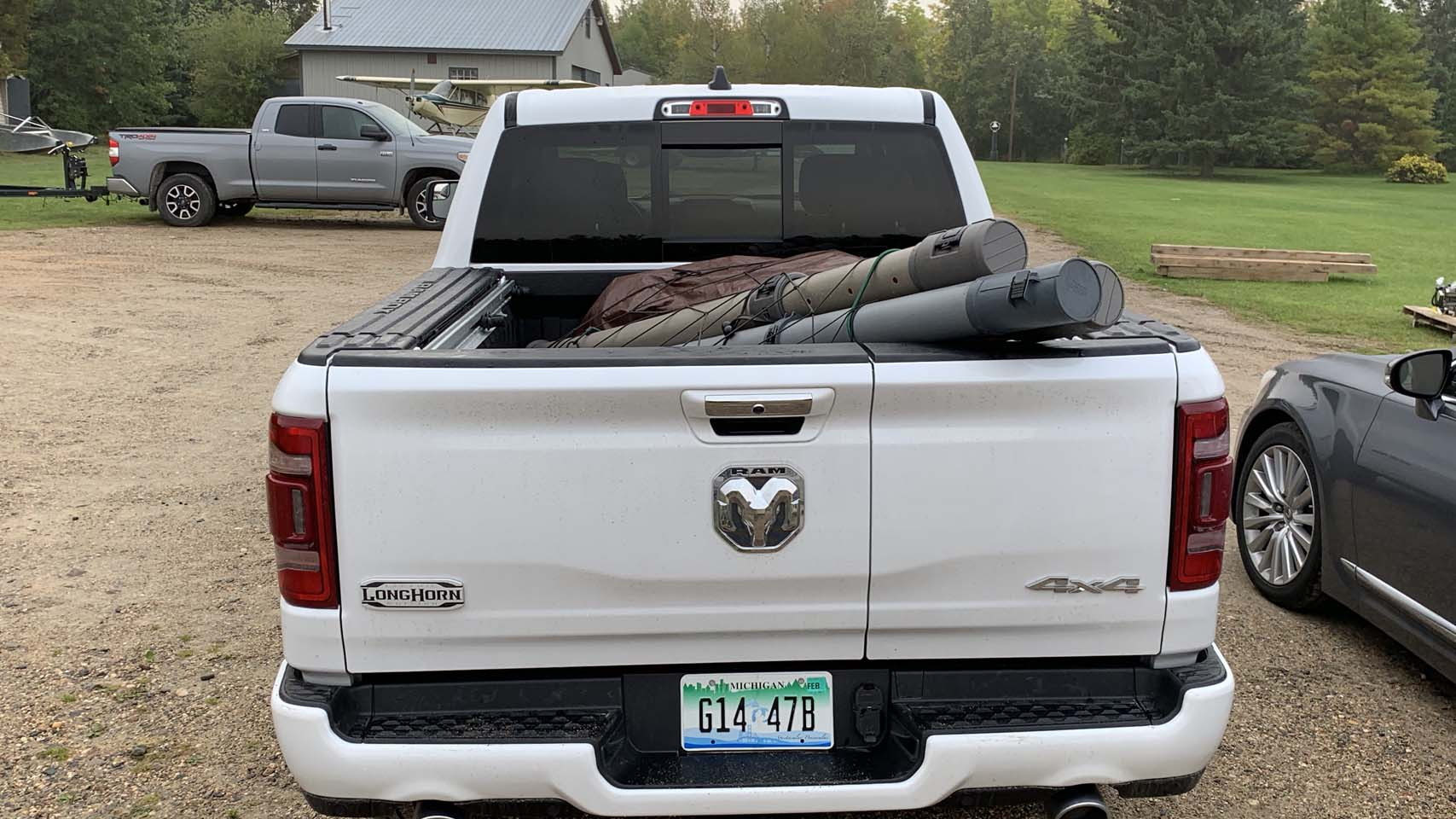 With the first factory-produced full-size electric pickup trucks still under development, the most fuel-efficient full-size pickups on sale from an automaker are powered by diesel fuel.

At Fiat Chrysler Automobile dealerships, that’s the Ram 1500 EcoDiesel. Although official EPA numbers remain pending as we write this, the diesel is expected to offer more miles per gallon than the 5.7-liter Hemi V-8 e-Torque mild hybrid model. And with a tow rating of up to 12,560 pounds, it very nearly matches the V-8's 12,750-pound rating.

Plenty of shoppers who really require a full-size pickup should choose it in the name of efficiency.

Recently I took a pre-production 2020 Ram 1500 Laramie Longhorn EcoDiesel and loaded it up with four guys, a bed full of fishing gear, luggage, and more snack food than anyone really needs to head up to Canada fishing for a long weekend. In other words, I put Ram’s diesel-powered pickup truck to use in the real world in a way many pickup owners will.

The journey began in Minneapolis, Minnesota where I topped off the Ram 1500 EcoDiesel’s 26-gallon fuel tank at a gas station near my house. Upon restarting the truck, the trip computer indicated over 550 miles of range until empty.

Within minutes of hitting the highway we ran into a massive storm front, with heavy rain and mild winds that did our fuel economy no favors as it added drag. The skies didn’t clear for hours, but eventually the rain stopped and overcast skies led the way through the forests of northern Minnesota.

After over seven hours of travel—just over 350—miles we arrived at the Lake of the Woods landing, unloaded the Ram, and said goodbye to cellular connectivity. Four days later we loaded it back up and headed home to the United States.

Almost 200 miles later the Ram’s gauge cluster read Low Fuel and we stopped in Akeley, Minnesota for 23.796 gallons of diesel at $2.89 a gallon. This was the first fill-up during the trip after 556 miles of driving with a hand-calculated average of 23.7 mpg.

With a full tank of fuel we continued south, stopping for smoked fish, McDonald's, and other completely necessary and unnecessary Boy’s Weekend road trip stops along the way.

For the return I went back to the same gas station, and pump, the truck was topped off at before leaving town to perform one final top off. The 26-gallon tank accepted another 6.8 gallons of diesel at $2.83 a gallon.

After over 12 hours in the truck we had traveled 732 miles from the beginning to the end of our fishing weekend in Canada.

The 2020 Ram 1500 EcoDiesel drank 30.605 gallons of diesel over the course of those 732 miles—an average of 23.9 mpg. The trip computer in the gauge cluster said we averaged 22.8 mpg over that same 732 miles, but Ram spokesman Trevor Dorchies told Green Car Reports the pre-production truck’s trip computer didn’t have final production calibrations, i.e. while it underreported for us the production truck’s software will be updated to be closer to the actual fuel economy.

The Ram 1500 EcoDiesel has two main drawbacks over the gas V-8-powered model.

The cost might not calculate out over the years, but the efficiency can’t be contested. Diesel fuel is energy-dense, and a key advantage of diesel engines is that you don’t use much additional fuel while under load—whether that’s with a boat strapped to the back or four guys and a bed full of fishing gear for the weekend.

The upfront investment will take about six years at current fuel prices to be repaid. Most trucks are on the roads for decades, and diesel-powered trucks historically have better resale value.

With nearly no loss in capability, and a lot more efficiency, it’s hard to mount an argument against the EcoDiesel in the 2020 Ram 1500 outside of its upfront price premium, until electric trucks arrive. Then it’s a whole new era.