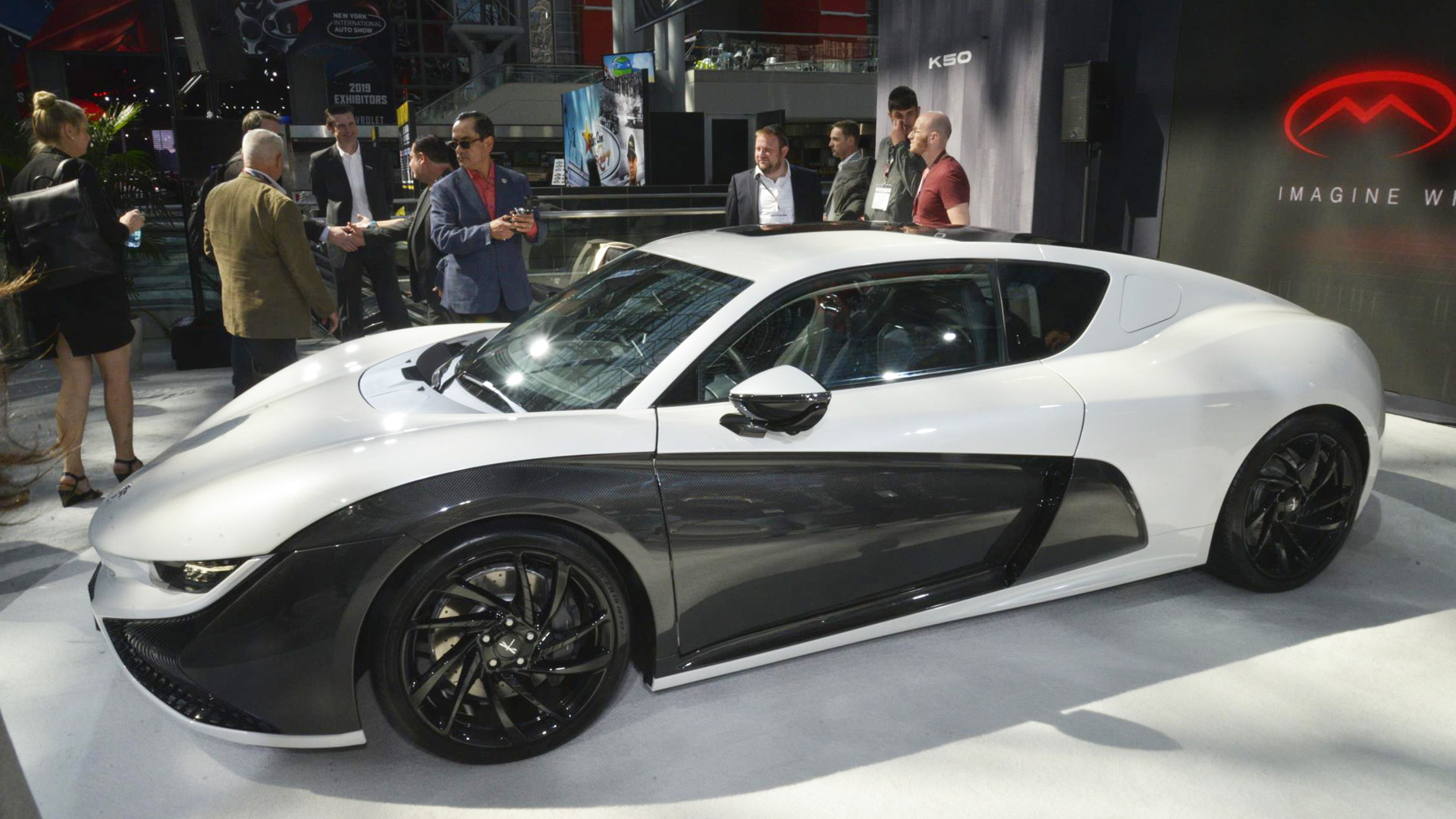 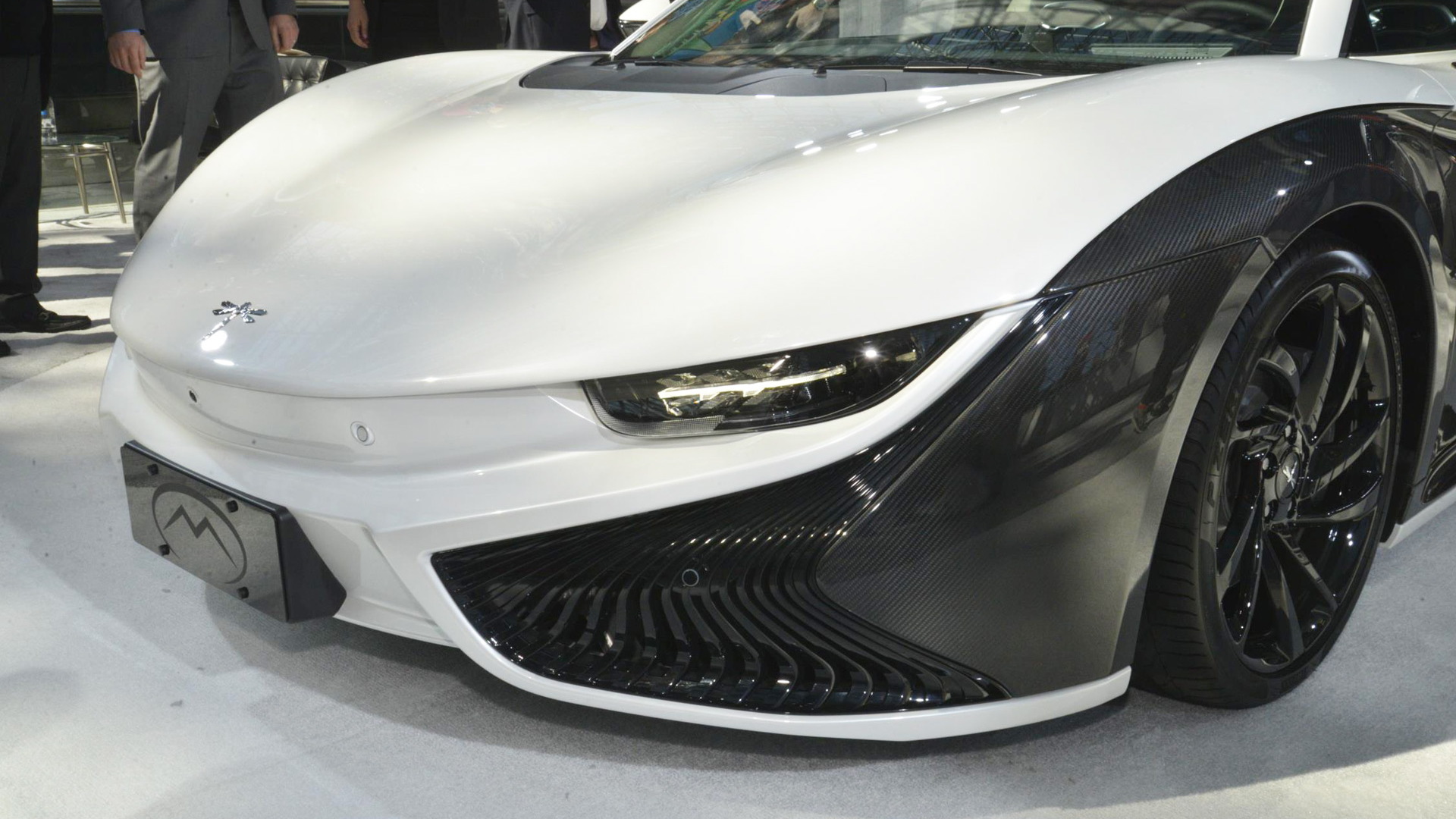 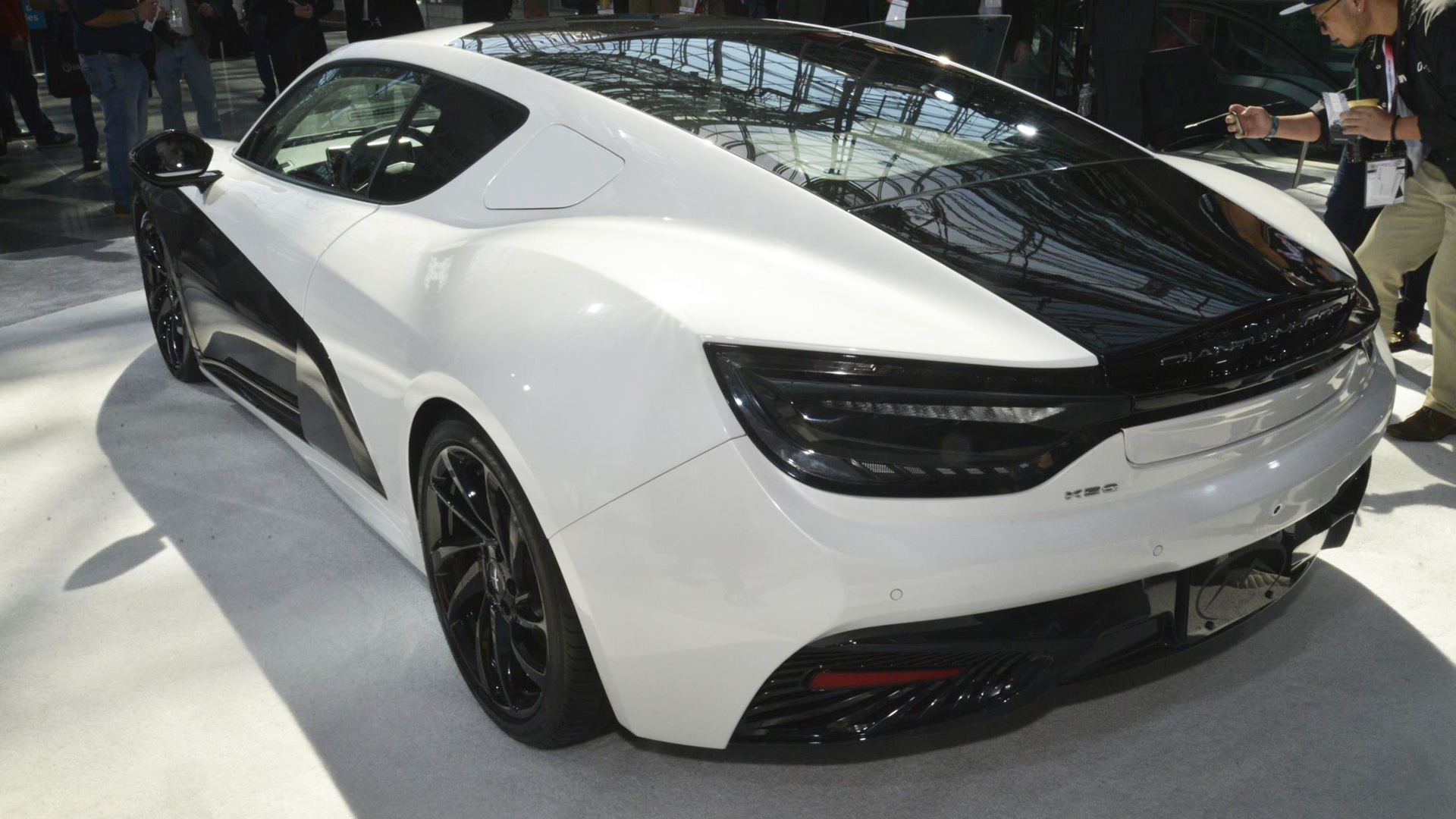 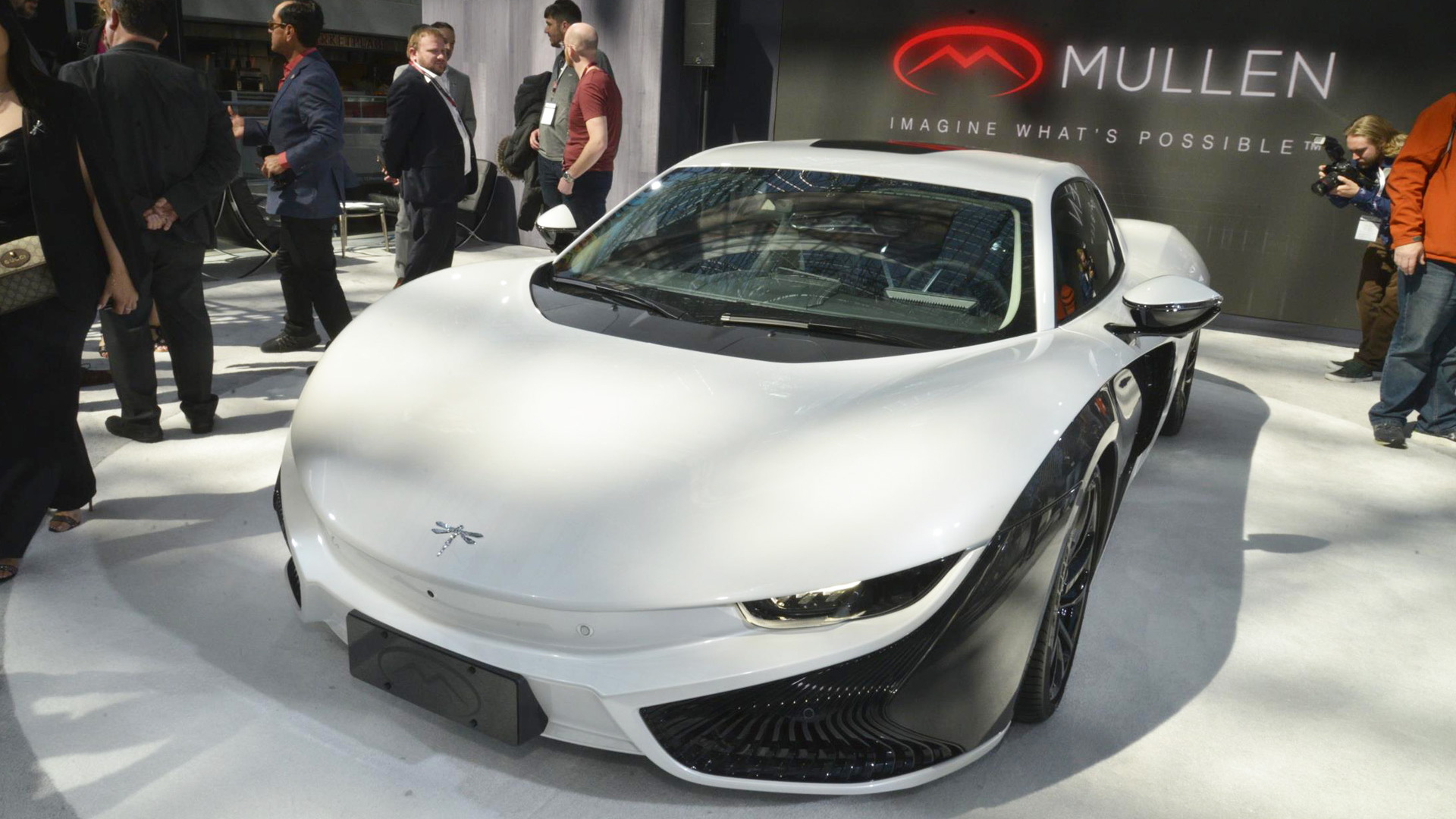 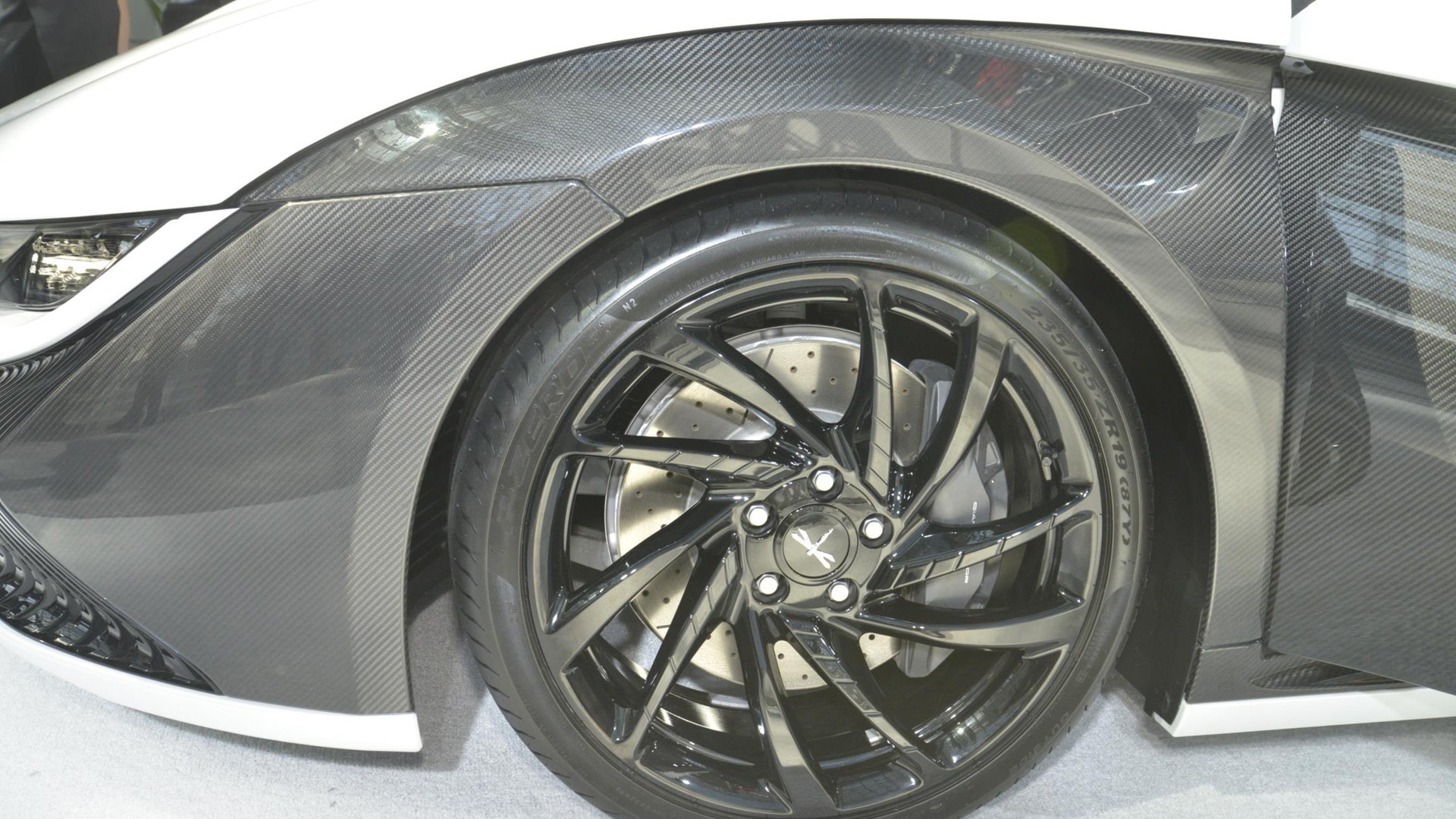 Frank McMahon, the chief technology officer of California’s Mullen Technologies, didn’t know anything about the exotic-looking, fully electric Qiantu K50 until he encountered it as a production-bound prototype while attending the Beijing auto show in April 2017.

Now just two years later, after about 1,000 K50s have been made in its home market, Mullen is exhibiting the aluminum-framed, carbon-fiber bodied K50 as (partly) its own, at the 2019 New York auto show—with plans to assemble up to 1,000 of them in the U.S., at a yet-undisclosed location.

McMahon said that Qiantu showed off a body-off chassis and body alongside the car at the Beijing auto show, and the possibility stood out among others the company had been considering. “I thought it looked fantastic and cool,” he said to Green Car Reports, this past week at the NY show.

In December 2018 Mullen signed a cooperation agreement with CH-Auto, the parent company in China, making Mullen its U.S. outlet and giving it the option to bring the model to Europe.

Outliers on both continents

Mullen USA most definitely does not fit into the template of other wannabe Chinese car manufacturers, startups, or distributors. Mullen has a group of California dealerships selling used cars, and it’s the owner of the site CarHub. It’s also the company that purchased the remains of Coda, which tried to bring a frugal, anonymous-looking all-electric sedan to the market in the earlier part of the decade. And it has ambitions to design, engineer, and bring its own EVs to market in a few years.

Amid all of these potentially conflicting priorities, the K50 is what the company is focused on now. “That’s Mullen’s main objective...to homologate it for the U.S., assemble it for the U.S,” underscored McMahon, who previously worked for Fisker Automotive and was part of the team behind the Fisker Karma (now called the Karma Revero). 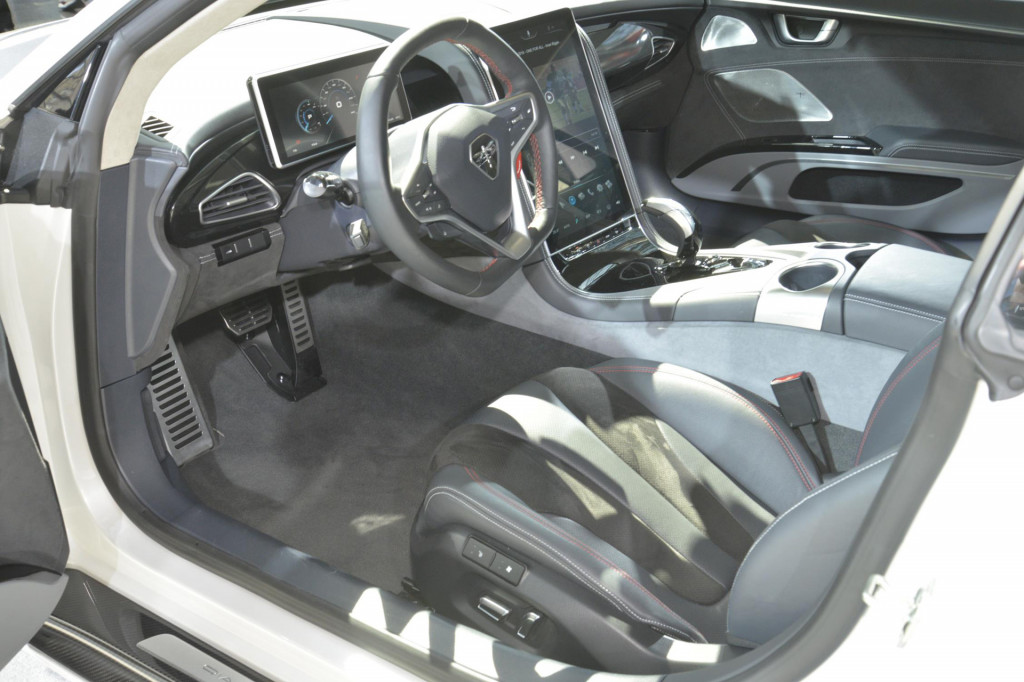 In person, the K50 is very low—in the same realm as a Rimac Concept_Two, but without the scissor doors, or somewhat close to the next-gen Tesla Roadster. But we also can’t help but think from some of the details that this would be what the Pontiac Fiero might be if it were still built today.

The body structure is made mostly of extruded aluminum, with carbon fiber body panels, produced via autoclave, with a baked-in color-resin system. The hatch is another non-carbon-fiber composite material, in a somewhat rippled gloss-black, with a window into what looks like it might have been, in another life for the sports car—[gasp]—an engine bay.

McMahon admits that at an earlier design stage, the K50 may have been designed for the possibility of an internal combustion engine. While the T-shaped battery, with the bulk just behind the seats, doesn’t give this car as low a center of mass as a skateboard battery/chassis would, it has 47 percent of its weight on the rear wheels—a good thing for handling.

There’s one thing missing in this configuration, though: cargo space. There just isn’t much of it, and McMahon says that they’re working on it.

CHECK OUT: Volvo taking on Tesla with Chinese-built Polestar 2

The K50 has 430 total horsepower, with 160 kw of output each at the front and rear motors, which permanent-magnet motors rated for significantly more power than that. On each axle torque is modulated left to right by the brakes. Acceleration to 60 mph comes in an estimated 4.2 seconds, with a top speed of 125 mph, and the performance setup for the U.S. includes Pirelli P-Zero tires and Brembo brakes 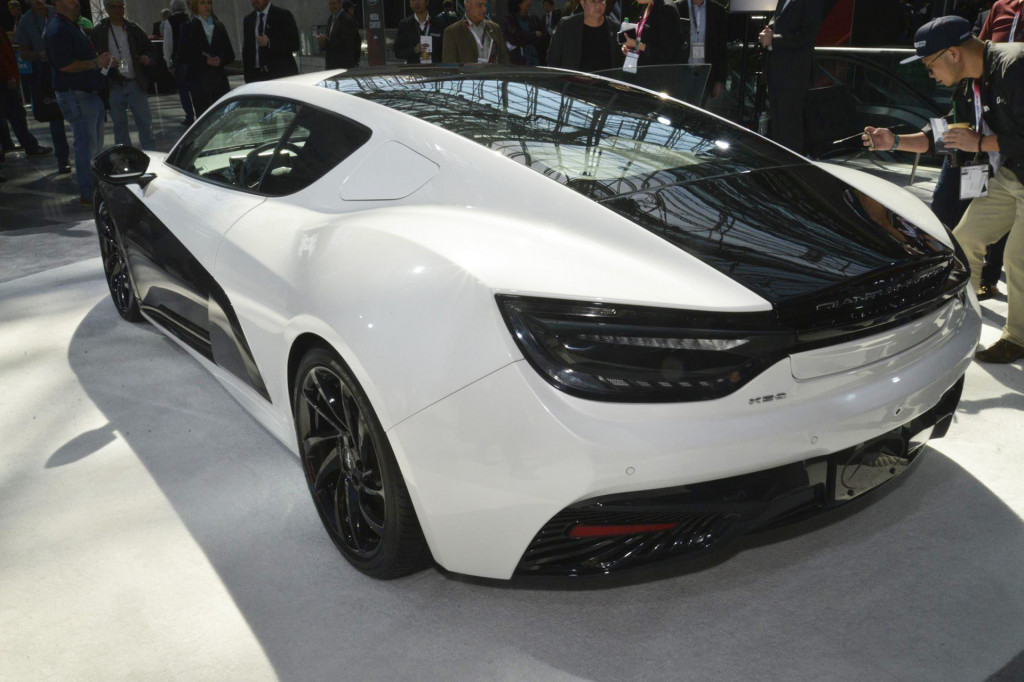 The K50 has charge doors on both of its rear side pillars—DC fast charge on the right, AC on the left. Mullen still needs to adapt the interfaces to U.S. spec, but it will have CCS (Combo) charging good for up to 140 kw and a 40-minute charge of its 78-kwh liquid-cooled pack. A 6.6-kw onboard charger will get the pack, made of Chinese-sourced nickel-manganese-cobalt pouch cells, to full in about 12 hours.

The K50 hasn’t yet been rated for U.S. range, although it has earned 236 miles on the old NEDC tests. That would likely place it closer to 150 miles than 200 miles in terms of EPA-rated range.

Mullen intends to assemble the K50 in the U.S., and he notes that the carbon fiber body panels come out of their process in full color and don’t need to be painted—which is both a logistical challenge and an environmental benefit.

The carbon fiber panels, however, slow down the rate at which Qiantu can produce them. “Right now, I don’t believe they can meet the demand for this vehicle—and that’s a good thing,” said McMahon. 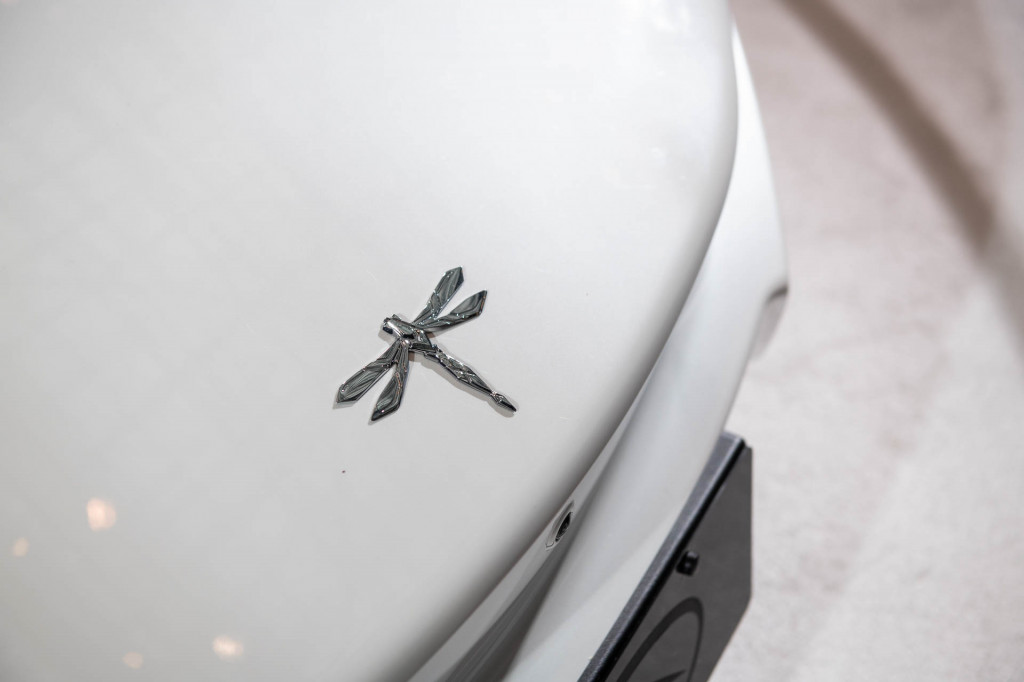 The K50 comes with full LED lighting, a heated windshield, heated and ventilated seats, and panoramic surround-view cameras. A solar panel produces less than 200 watts and will help cool the interior when the vehicle is parked outside. The interface includes a big 15.6-inch tablet-style touchscreen, and there are three levels of brake regeneration.

READ MORE: Chinese electric car Qiantu K50 might be made in the U.S.

Mullen’s separate electric vehicle project remains several years out. “It’s coming along, in the styling and design mode,” said McMahon. “If we can move at the speed we want to move, it’s very likely you could see a proof-of-concept vehicle at the LA auto show.”

Mullen acquired Coda’s intellectual property, and the portion of it that’s still relevant for that project, he said, are portions of Coda’s battery management system.

Prepared for Europe—and maybe the U.S.?

Mullen is in the process of homologating the K50, which was designed with European (ECE) standards in mind. “So we’re not going to be as far off as most people may think” in crashworthiness and crash-avoidance systems, explained McMahon, although the worst-case scenario is adding side-impact protection at the lower sills, as there is no side-pole test in China.

The best-case scenario for homologation and U.S. arrival is in the second quarter of 2020. “From a planning standpoint, all the possibilities and what-ifs, October 2020 is the official target—depends on what we find,” said McMahon.

McMahon says the company is considering prices that range from $105,000 to $150,000, but it won't be less than $100,000 in any case, he says. If Mullen can make it to the U.S. it could strike a very intriguing, exclusive middle ground, with Tesla Roadster looks for Model S money.