The Chevy Volt won its umpteenth monthly plug-in sales title in Canada last month, but soaring sales of other models were the big story in the Canuck electric vehicle market—which may have reached 1.75 percent of the market in March.

The Volt tallied 555 March sales, Canada’s second-best single-month total for any model, second only to the 582 it managed last November.

Not far behind them, Nissan sold 423 second-generation 2018 Leafs. That was not only Canada’s seventh-best single-month plug-in sales total, but also more than double the first-generation Leaf’s record of 170 units, set in August 2016.

That means the new Leaf almost doubled the sales of the Chevy Bolt, which sold a still-vigorous 248 units. 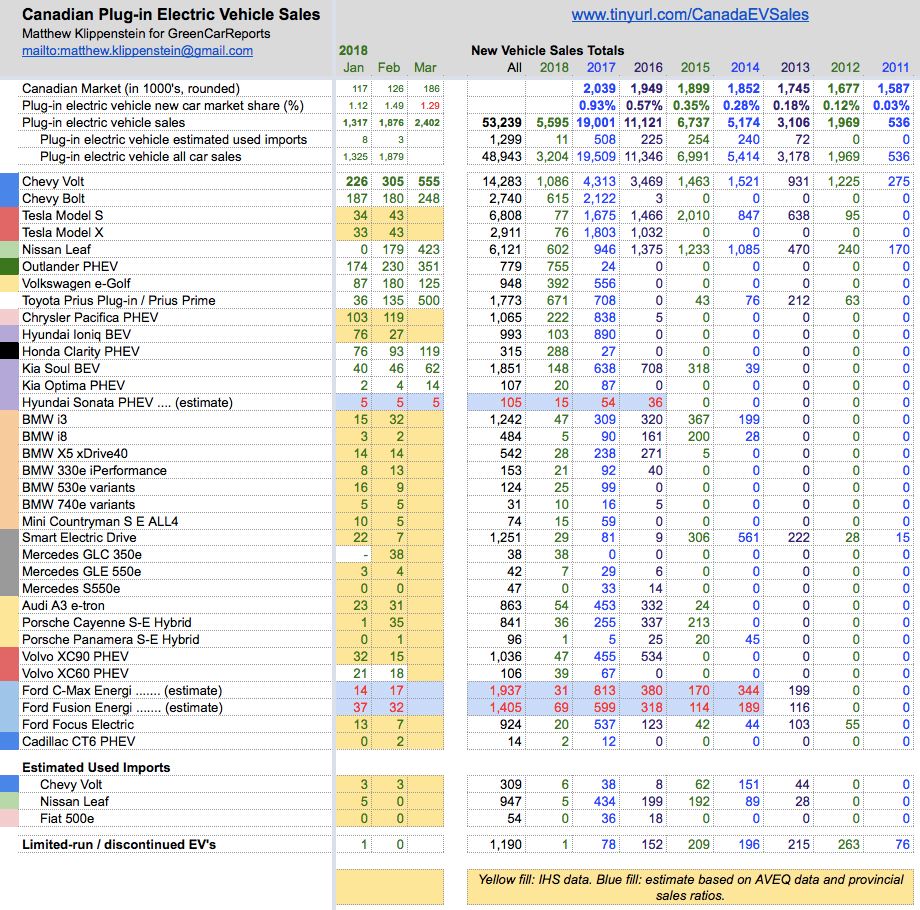 With the Prius Prime and second-generation Leaf in their first few months of availability, pent-up demand may have contributed to their March sales volumes; their “steady-state” sales levels might be more modest.

Expect the next few months to tell us something about Canadians’ willingness to trade range and price.

The Prius Prime (40-km electric range, $32,990) seats four and has half the rated range of the Chevy Volt (85 km, $39,095), but it is less expensive, though the Volt does qualify for greater purchase incentives.

Mitsubishi’s sales of 351 Outlander PHEVs may have been good enough for fourth spot behind the Volt, Prius Prime and Leaf.

With Tesla now deemphasizing the Model S and X in favor of the Model 3, the Outlander PHEV might relegate Tesla to fifth place.

READ THIS: Plug-in electric car sales in Canada for 2017

Among other reporting automakers, Volkswagen sold 125 e-Golfs, down from February’s 180, due to the timing of shipments. Honda sold 119 Clarity Plug-In Hybrids, building on February’s 93, while Kia sold 62 Soul EVs and 14 Optima PHEVs.

Their numbers are likely small, however.

Tesla’s tepid January sales (34 Model Ses, 33 Model Xes) continued in February, as the company sold 43 Model Ses and Xes apiece. The 153 sales in the two-month stretch were the lowest since the 135 in January and February 2016, before the Model X arrived north of the 49th parallel.

The plug-in Chrysler Pacifica Hybrid minivan continued to enjoy healthy volumes, with its 119 units in February almost exactly equal to its monthly sales average over the past six months (121 units).

CHECK OUT: Driving a Chevy Bolt EV electric car across Canada, all the way

Hyundai sold 27 Ioniq Electrics, down significantly from 76 in February, while Ford sold 7 Focus Electrics. Three used Chevy Volts appear to have been imported, and a steady trickle of RAV4 EVs continues to be imported, perhaps a dozen over the past year and a half.