Ten days ago, when the first 30 Tesla Model 3 electric cars were delivered to their owners at a much-publicized Handover Party, we didn't get full information on the latest Tesla model.

The company didn't discuss battery capacity in kilowatt-hours, for instance, giving range in miles instead, nor did it release specs for motor output, EPA ratings, or other usual information.

Now, however, one fan has uncovered what appears to be the Model 3's EPA energy-efficiency rating.

The news came yesterday from a Tesla Motors Club forum post by user StopCrazyPP, who snapped an image of the Model 3's window sticker lying in the front trunk of a car about to be delivered.

While much of the information on the sticker is unreadable, the "126 MPGe" rating is clearly visible.

That puts this Model 3, presumably a 310-mile Long Range version with the larger of two battery options, in third place for energy efficiency among all new cars on sale in the U.S. for 2017. 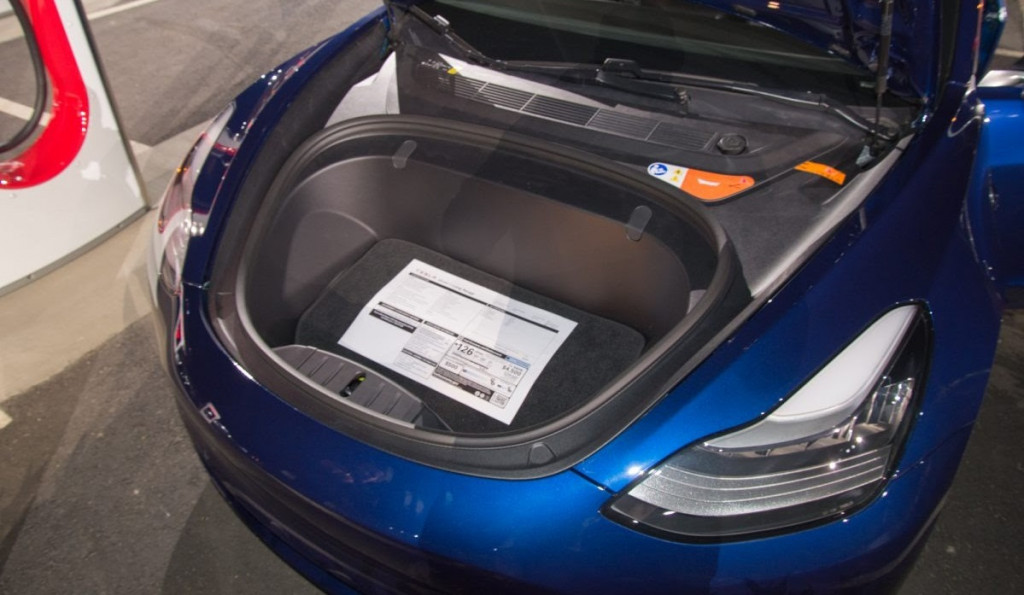 Ahead of it are the 124-mile Hyundai Ioniq Electric, at 136 MPGe, and the Toyota Prius Prime plug-in hybrid, at 133 MPGe—both five-door hatchbacks from volume manufacturers.

It is at least possible that the standard Model 3 could do better than 126 MPGe; with 220 miles of range from a lower-capacity battery, it might be somewhat lighter than the pricier Long Range model which has more features.

Miles Per Gallon Equivalent, or MPGe, is a measure of how far a vehicle can travel electrically on the same amount of energy as contained in 1 gallon of gasoline.

The high numbers associated with the MPGe ratings of electric cars underscore how efficiently they use energy, compared to the waste of 70 to 75 percent of the energy in gasoline as heat and noise in a car that burns gasoline in an engine.

The most energy-efficient car in the U.S. starting in 2014 was the BMW i3 battery-electric hatchback with the original battery, which gave it a range of 81 miles.

It was rated at 124 MPGe combined, and it held that position for three years before being dethroned in 2017 by the plug-in hybrid Prius and the all-electric Ioniq.

While we're not sure that he's StopCrazyPP, by the way, the owner of the image posted on Google Photos is Andrew Rhodes.

Our thanks to him for providing information that Tesla has so far chosen not to release.