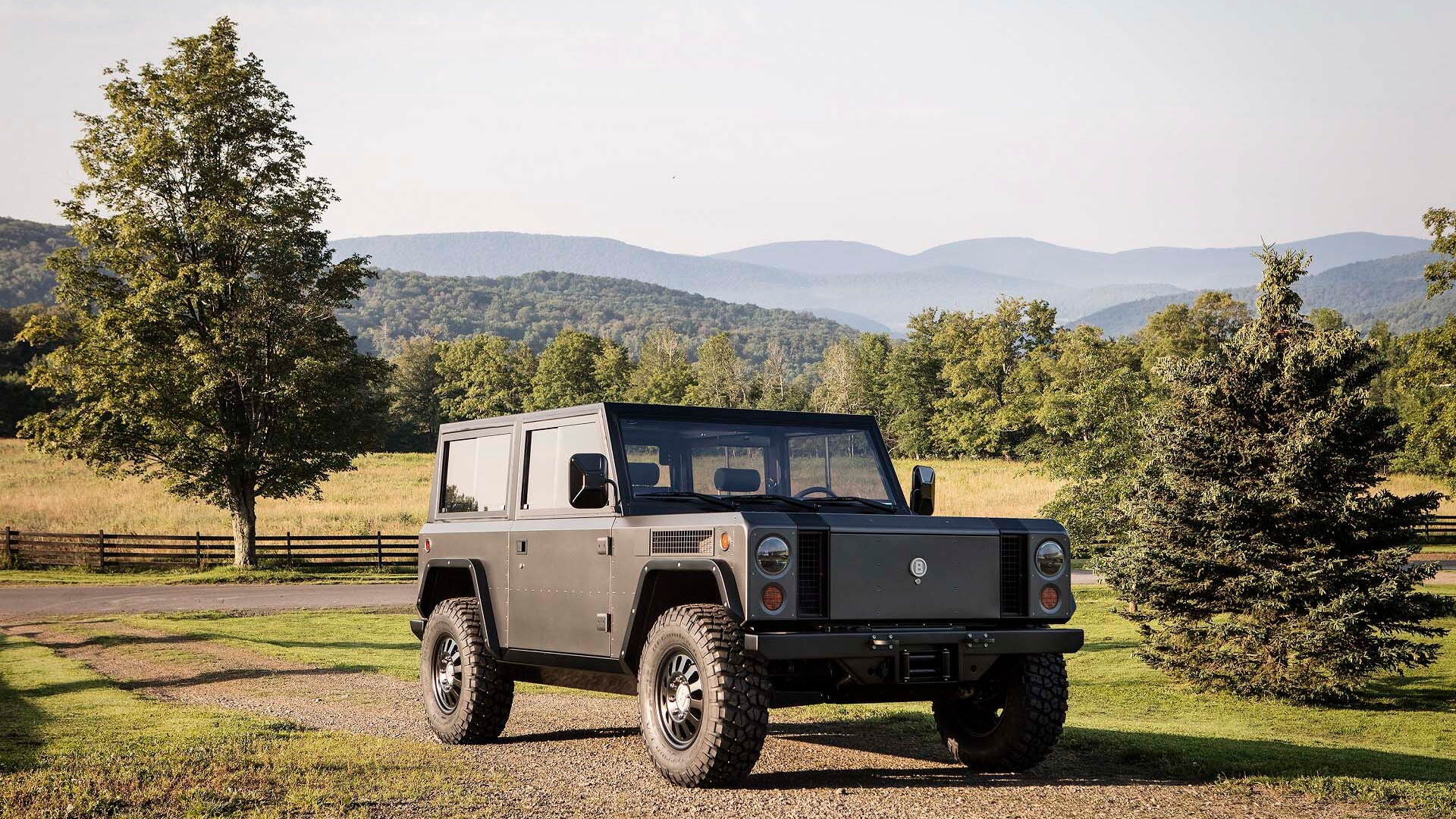 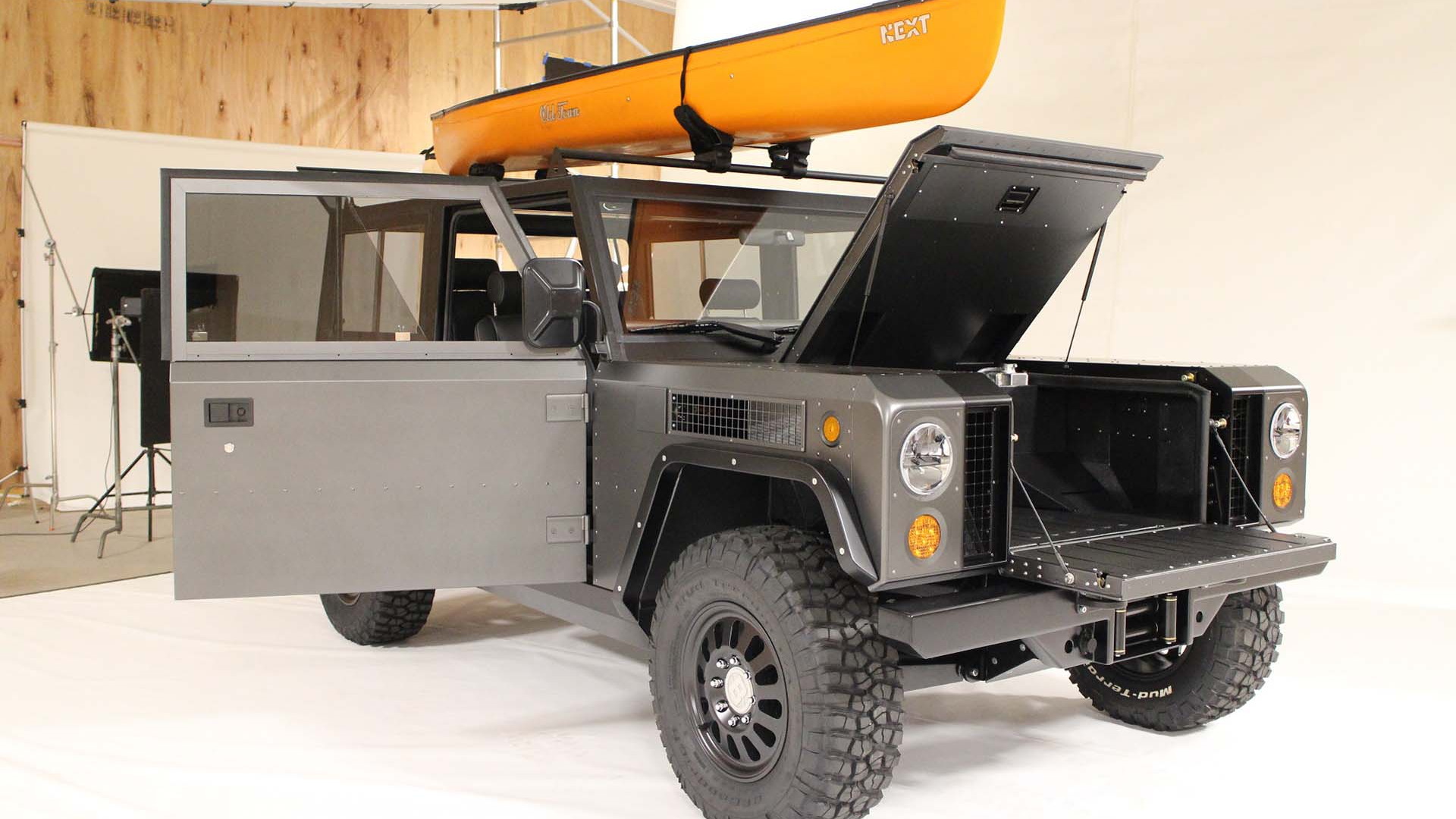 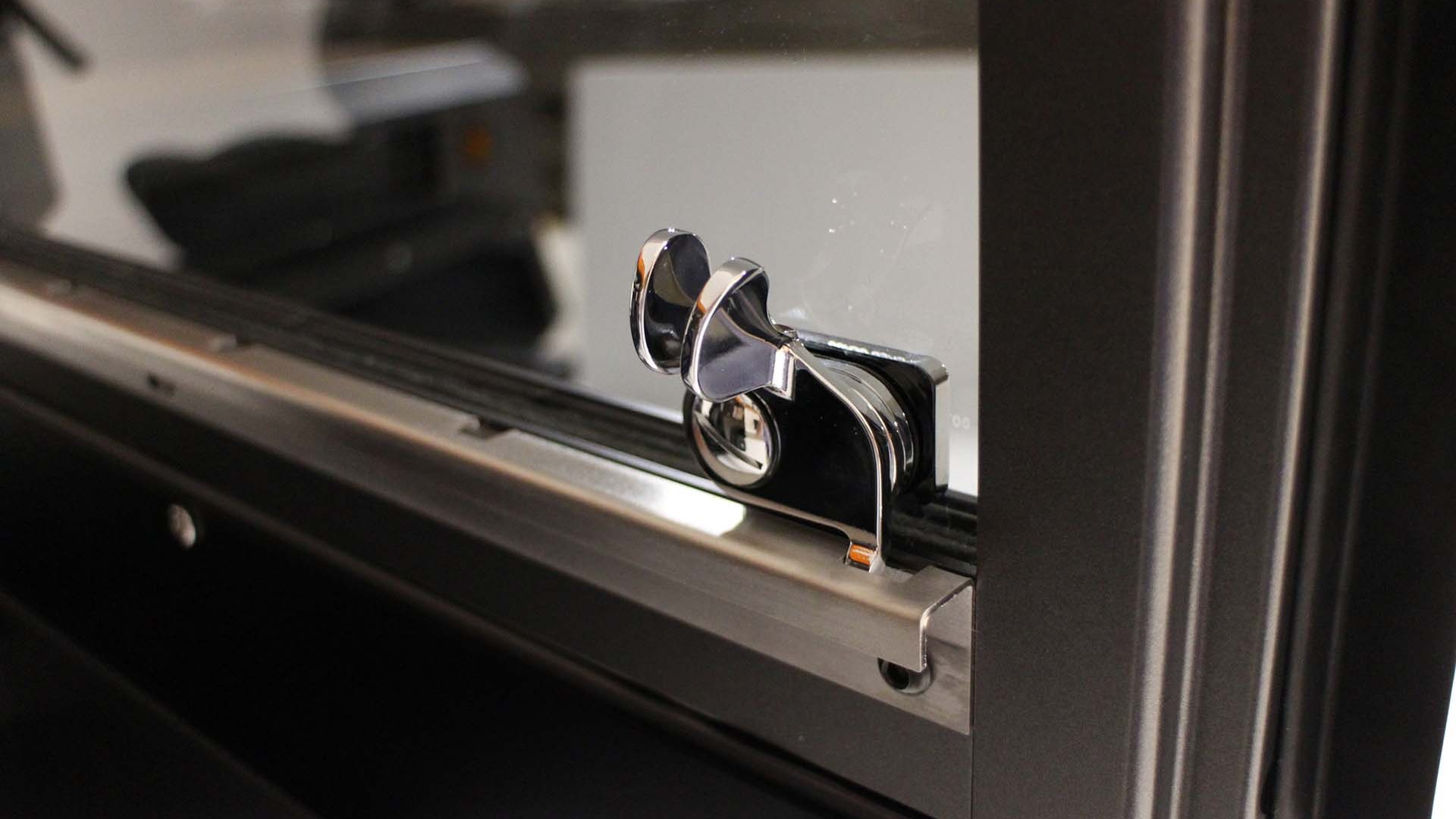 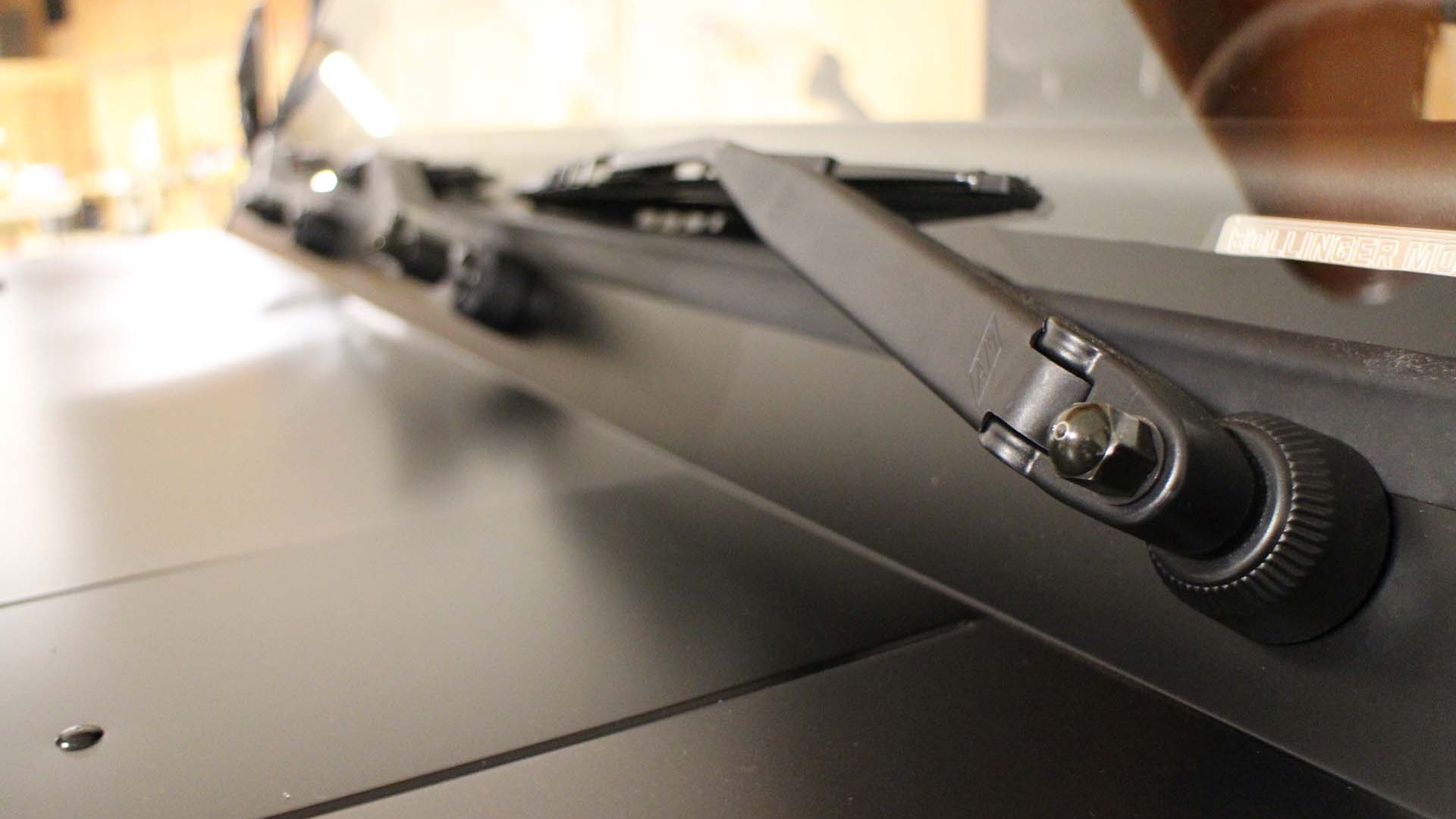 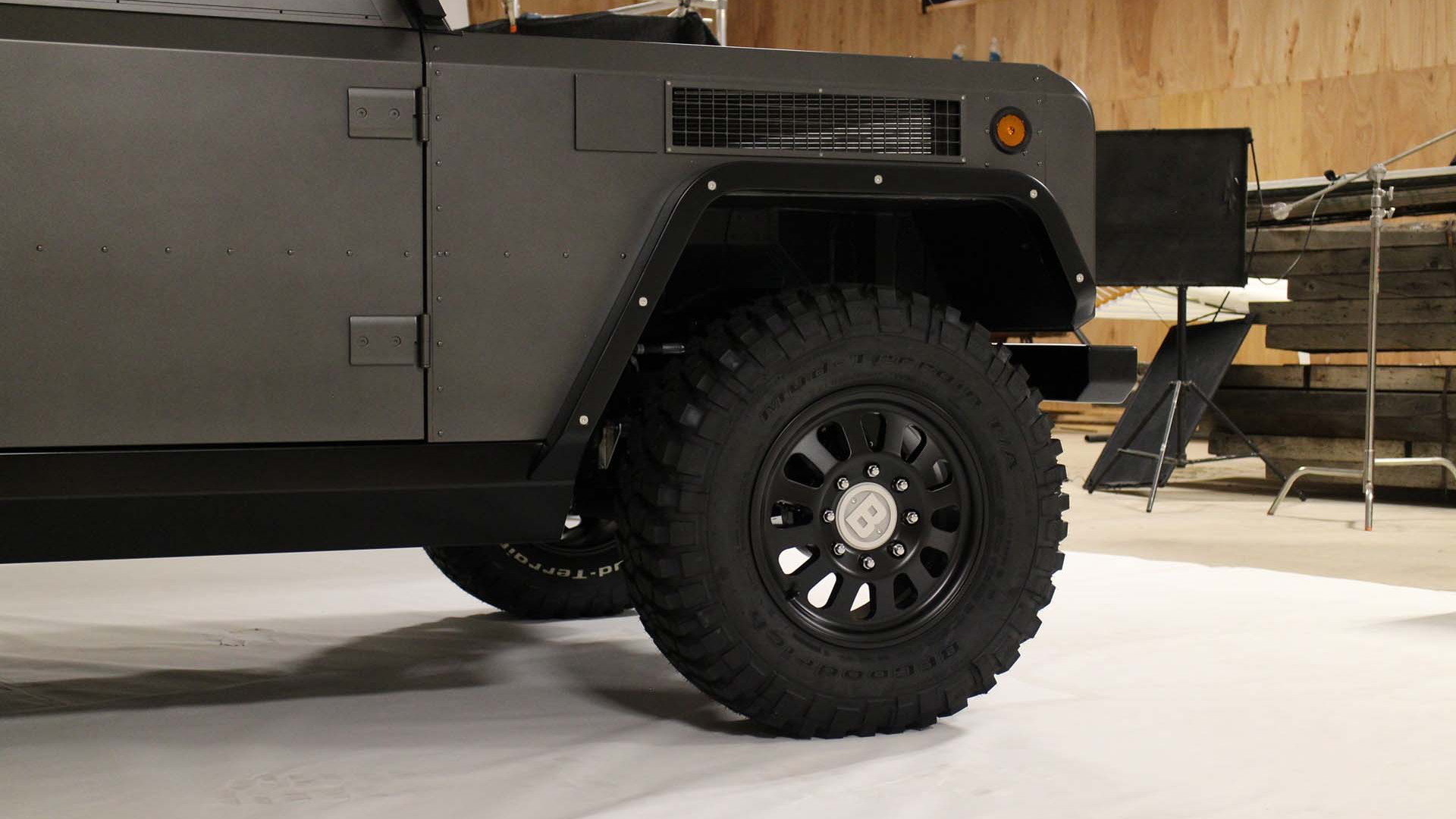 It's square-edged, with flat body panels, large knobbly tires, and a simple interior that can easily be hosed out when dirty.

The Bollinger B1 electric utility truck revealed tonight at the Classic Car Club on New York City's Hudson River was designed out in the country, where trucks have to be functional above all else.

And functional it is, with ground clearance that can go as high as 16 inches, a removable roof over the bed, and even power takeoffs for running anything from electric tools to an outdoor sound system.

Its two-motor electric powertrain gives it immediate torque on all four wheels for muddy fields and hill climbing, adjustable suspension lets it handle almost any terrain, and it's even got a fast-charging port for long-distance use.

But there's more to the B1 than something that might serve a better farm tractor: this is an all-electric vehicle designed for use on- and off-road equally.

From the front, the Bollinger electric truck has echoes of the Land Rover Defender. The rear will remind many of an International Scout, while there's a bit of old Ford Bronco in the square profile.

But all those vehicles had gasoline or diesel engines. The B1 has a pair of electric motors, one at each axle, and a flat battery pack under the cabin that opens up the vehicle in a way no utility truck with an engine could ever achieve.

How about the ability to load 10- and 12-foot-long lumber right through the front panel and out along the drop-down tailgate, or fill the bed with 4-by-8-foot sheets of plywood right up to the roof? (The bed is 49 inches wide.)

Maybe the ability to detach the rear window and frame from the removable roof and reattach it just behind the front seats to make an enclosed cab for two with an open cargo bed?

The running Bollinger B1 prototype in the pictures is a demonstration of what the company can do and the vehicle it hopes to produce for sale, starting sometime during 2019.

Specifications given for the prototype cite two battery options: a 60-kilowatt-hour base pack, and an optional longer-range 100-kwh pack.

The smaller pack is estimated to deliver a range of about 120 miles in what is hardly a wind-cheating shape, while the larger one should come in around 200 miles.

Total output for the two motors together is 270 kilowatts (360 horsepower), but a substantial 472 lb-ft of torque—which should be enough to get the 3,900-pound four-seat truck out of most situations, especially with a cited 0-to-60-mph acceleration time of just 4.5 seconds.

Payload is rated at 6,100 pounds, and the wheels are only 17-inch alloys, their size expanded by the giant knobbly treaded off-road tires that give the 150-inch-long utility truck such visual presence.

The self-leveling hydropneumatic suspension can adjust to provide maximum ground clearance of 15.5 inches, and its design team stresses that the clearance to the lowest point of the undercarriage is a full 14 inches.

The frame and platform of the B1 electric truck is constructed of aluminum, as are the body panels, with the frame for the cabin made of high-strength steel

The minimalist interior, by design, features four circular gauges and a dashboard designed to accept drilling for custom-fitted instruments, accessories, and tools.

The interior of the single prototype utility truck is largely made up of off-the-shelf components sourced from various vehicles, including luxury power-adjustable seats with contrasting stitching and sliding-window hardware from a Volkswagen Vanagon.

Bollinger says the color of the prototype, a dark-grey gunmetal metallic, will be the company's signature.

From our visit to Bollinger, we'd say it's a subtle tone that may be more impressive in person than in photos.

One interesting regulatory note is that the Bollinger B1 is intended to qualify as a Class 3 commercial truck, meaning its total load capacity falls between 10,001 and 14,000 pounds.

That considerably reduces regulatory requirements compared to large sport-utility vehicles intended for passenger use, crucial for a small startup company like Bollinger.

He easily admits that his fledgling upstate New York company will need more investment capital even to start tooling up for low-volume production.

The company's website opened for potential buyers to indicate their interest during the evening launch event, although the company won't start taking deposits for reservations until later in the year.

The purpose of the gala launch event is to unveil the truck, get media exposure, and start to assess real demand for a vehicle that the team fully expects to be equally capable on muddy farm fields and in swanky neighborhoods.

That's a formula, after all, that has worked exceedingly well for the workhorse British Land Rover and its surging Range Rover luxury brand.