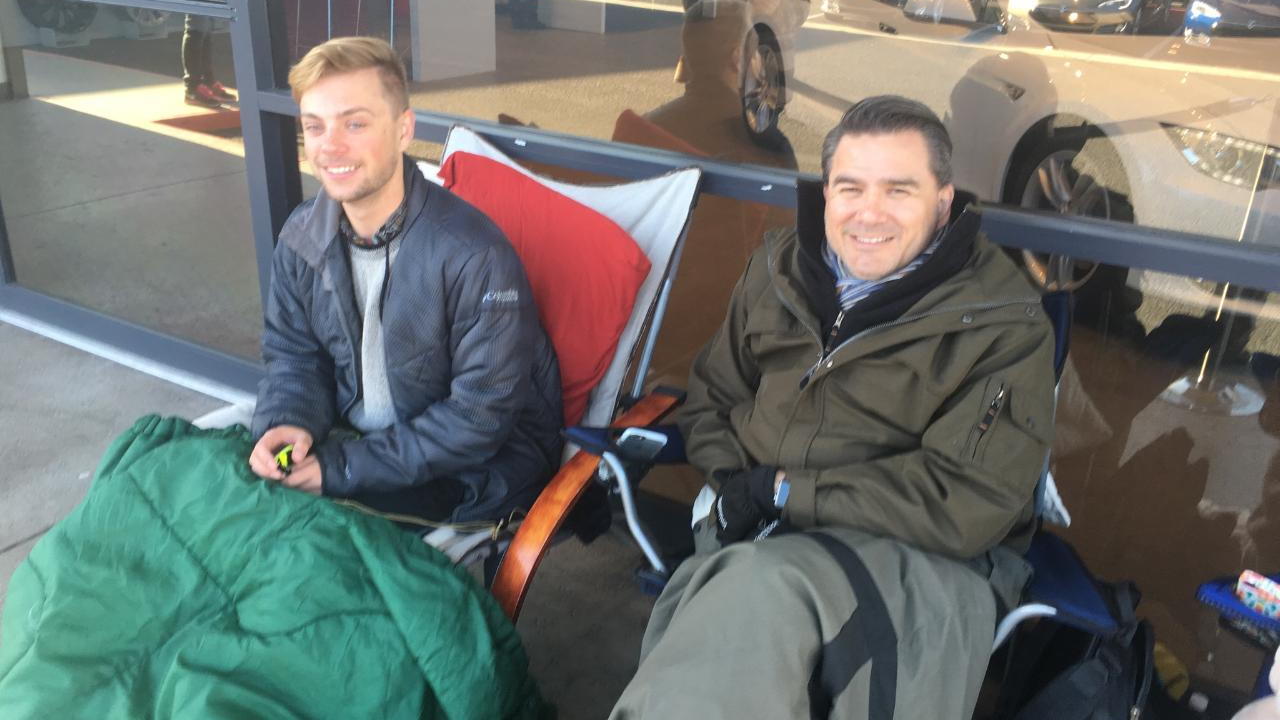 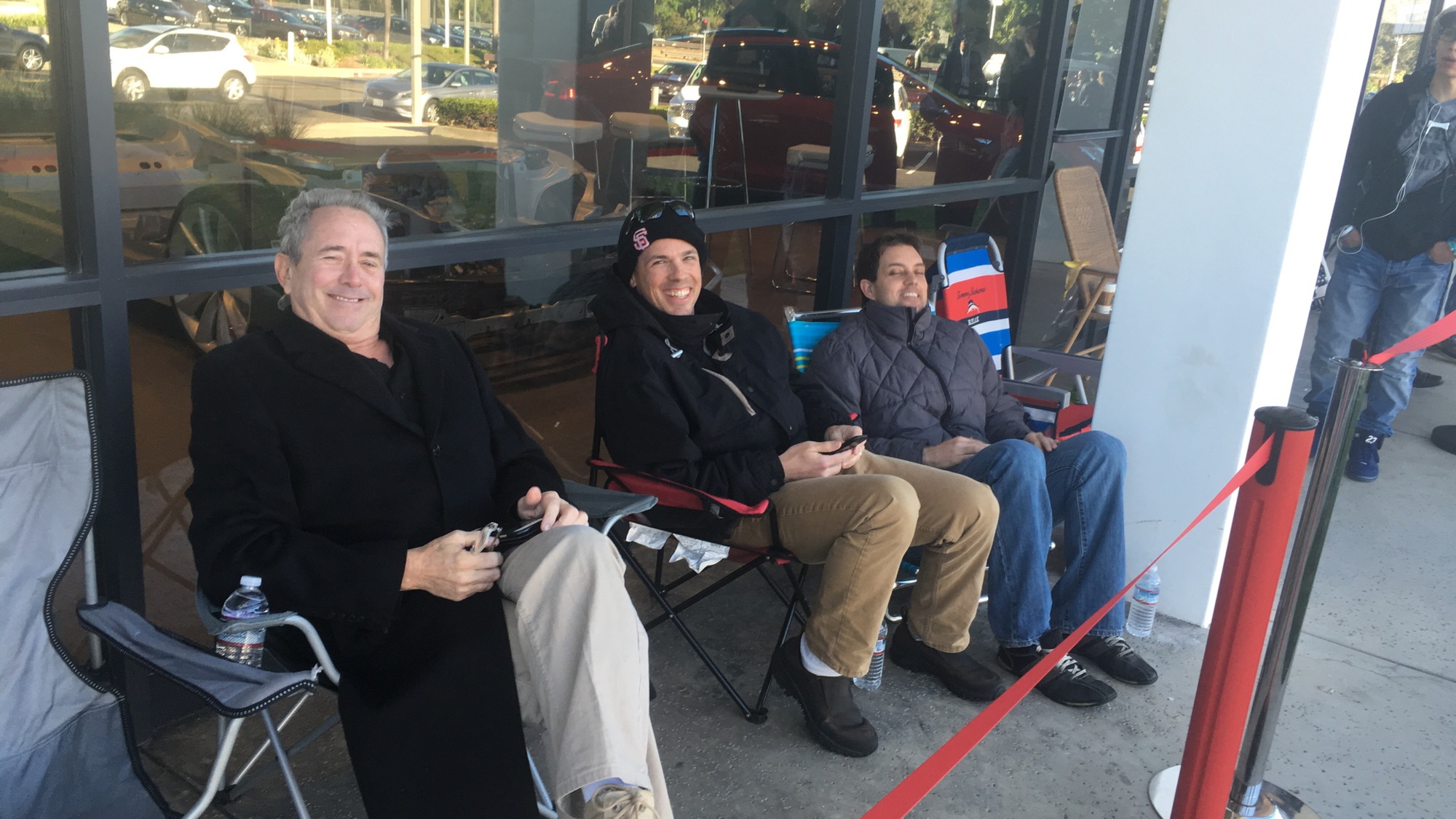 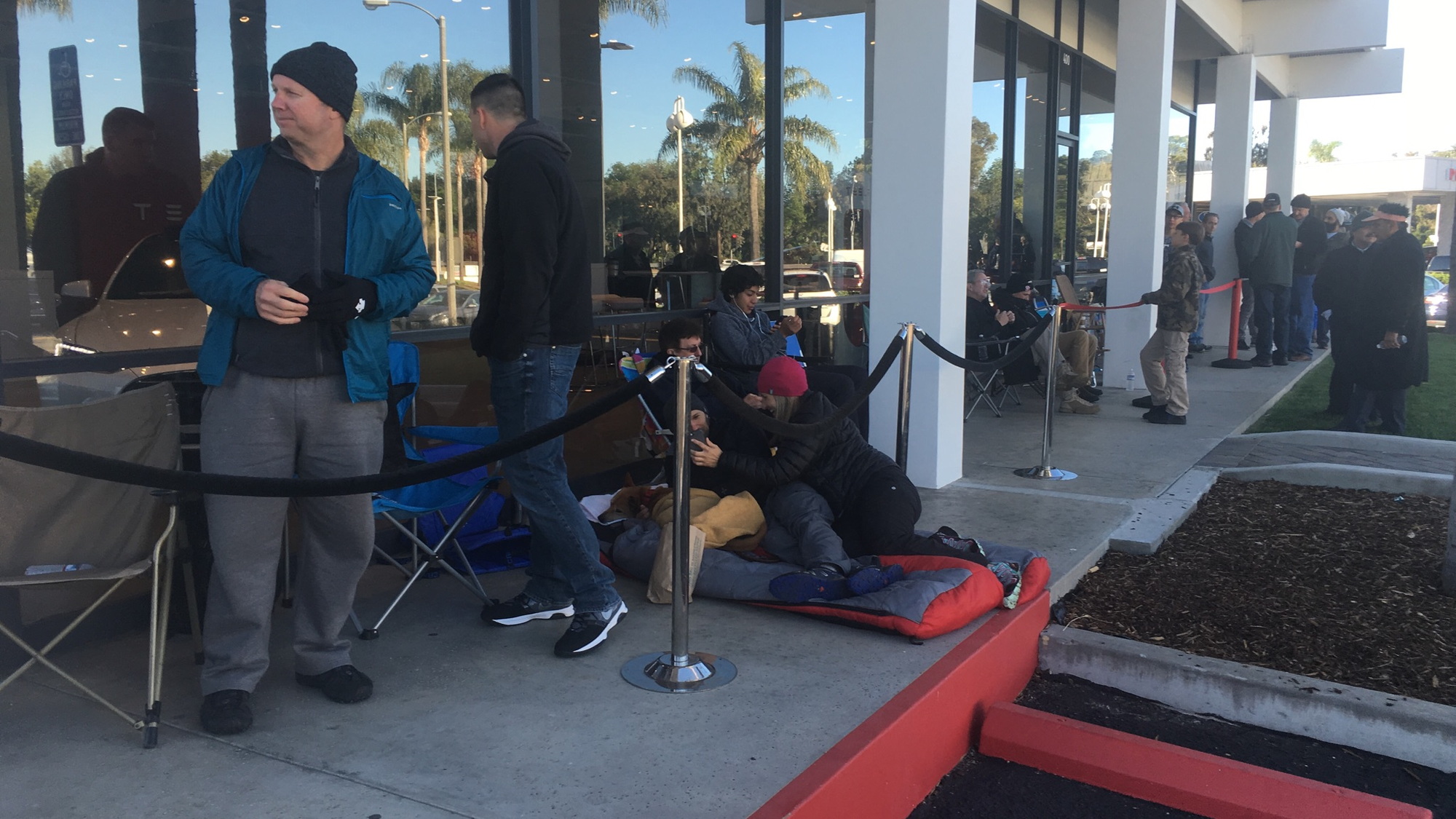 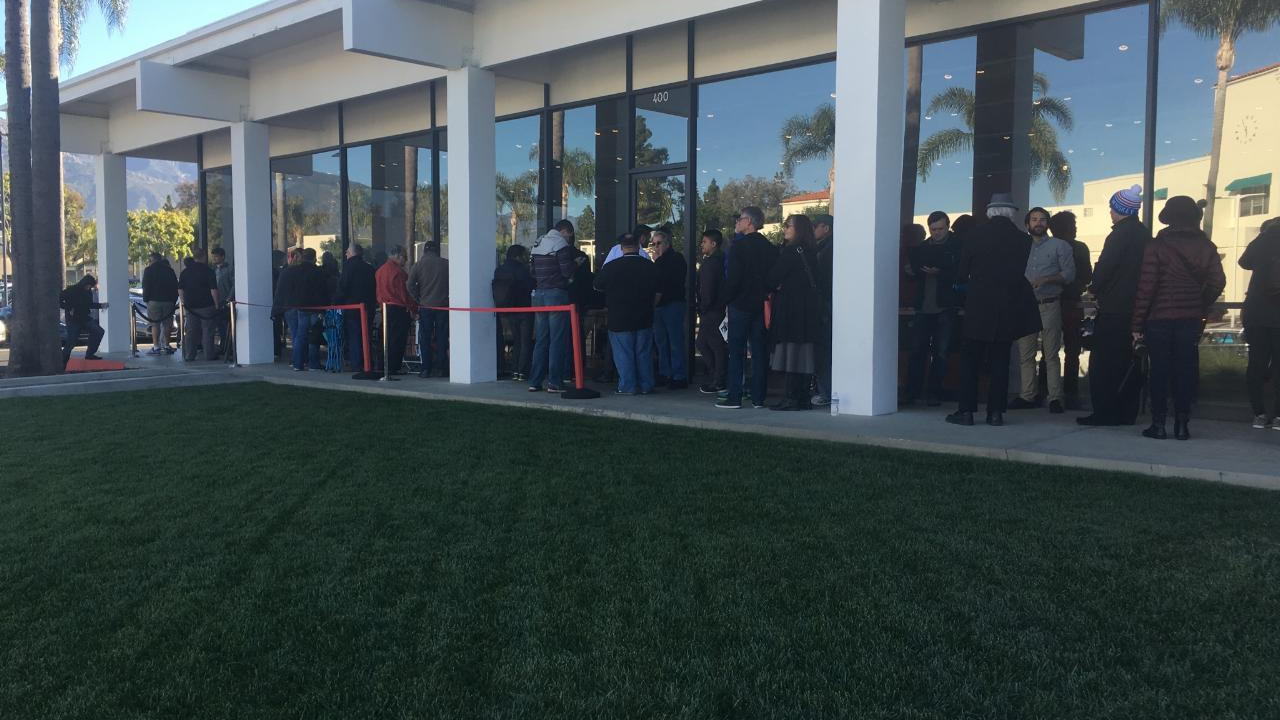 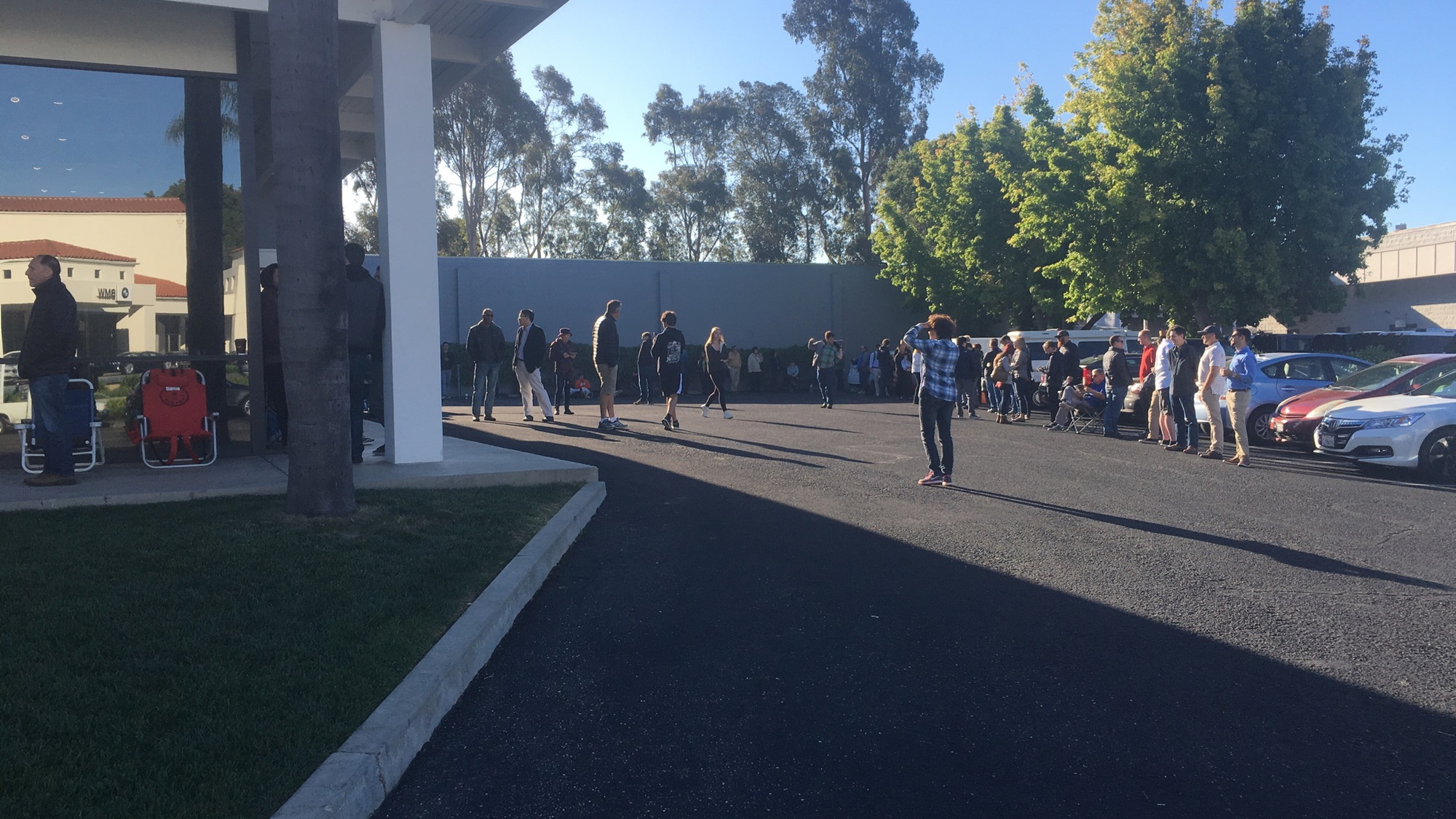 I figured I’d be smart, and get to the Tesla Store at 8:30 a.m., half an hour before it opened. That would get me in line for the Model 3 before everyone but a few die-hard camper-outers.

Boy, was I wrong.

As I pulled up to the store in Santa Barbara, California, this morning, the parking lot was already full.

The line of Model-3-hungry humanity stretched half-way around the building and 100 feet out onto the driveway tarmac.

l found what appeared to be the last empty on-site parking spot and hustled over to the end of the line, behind a shaggy-haired guy who worked for Google.

A rough count showed about 150 people ahead of me.

A guy in a Tesla Motors jacket walked around passing out water bottles.(What, no coffee and donuts?) Cookies inside, once we open, he told us.

The Google guy said he’d hold my spot, so I wandered around.

ALSO SEE: How to reserve a Tesla Model 3 at stores and online (updated)

The first person in line was Ky Wagner, a 22-year-old fellow from Ventura (about 30 miles away).

He’d been there since 5 pm the day before, sleeping in a lounge chair he’d brought along. Already an electric Smart owner, he was looking to step up to a Tesla.

(Funny coincidence: the Google guy also had a Smart. Two of them, in fact. “My wife wanted one, too. Since it was the least expensive thing she’d ever asked me for, I figured I better buy it.”)

A gorgeous red Fisker Karma pulled up, to oohs and ahhs mixed with catcalls (“Gasburner!”) The poor guy said he’d paid $140,000 but had no parts available, no service outlet, and a car that was virtually unsellable.

I never did see whether the guy got in line, or was just cruising the scene.

Over in a corner of the parking lot, the owner of a new red Model X was surrounded by curious onlookers.

They clambered in and out, while a 12-year-old kid, the owner’s son, gave expert explanations of the car’s features. They could have used him over at the store.

Two guys behind me in line had flown in from Austria. They owned  a company that rents electric cars in Europe, including a bunch of Model Ses. Through Tesla contacts, they’d wrangled an invitation to the Model 3 unveiling tonight down in Hawthorne.

But eager to order Model 3s for their business, they figured the Santa Barbara store would be less crowded than the Los Angeles sites. So they drove 100 miles up from their hotel in Hollywood this morning.

I hear a guy saying that 85,000 orders for the Model 3 had already been placed in Europe and Australia, which got a head start on the U.S. because of time zones.

That couldn’t possibly be true. Could it?

CHECK OUT: As Model 3 approaches, Audi exec says: 'Tesla did everything right'

I was worried. How long does it take to process each order?  Even at 5 minutes per order, with five sales reps working simultaneously, that’s 4 hours.

Man, I don’t want to be here all day. I’m doing this mostly on the off-chance that they’ll be accepting orders for the Model Y, the rumored crossover version of the Model 3.

That’s the one I want.

Am I nuts? Standing here for 4 hours, waiting to give Tesla an interest-free $1,000 loan on a car that I know absolutely nothing about, and which may not exist at all?

But then, at 9 am sharp, the line started to move. Surprisingly fast.

I make it to the front at 10:05 am. I was waved into the showroom, where a Tesla sales guy had a tablet at the ready.

So Tesla generated about a quarter of a million dollars in cash at this one store in less than 2 hours. That's $2,000 a minute.

Pretty good business plan, if you ask me.