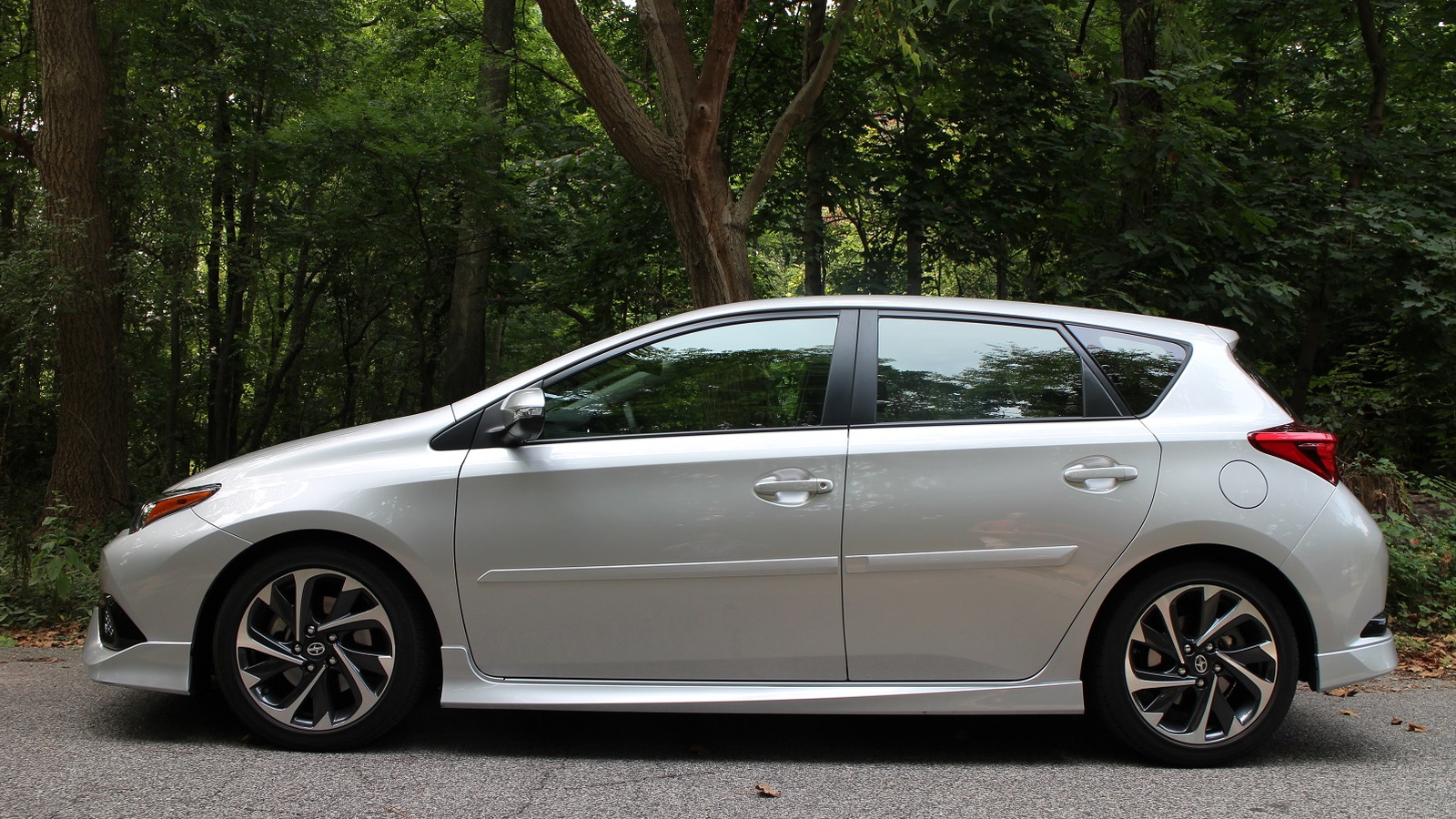 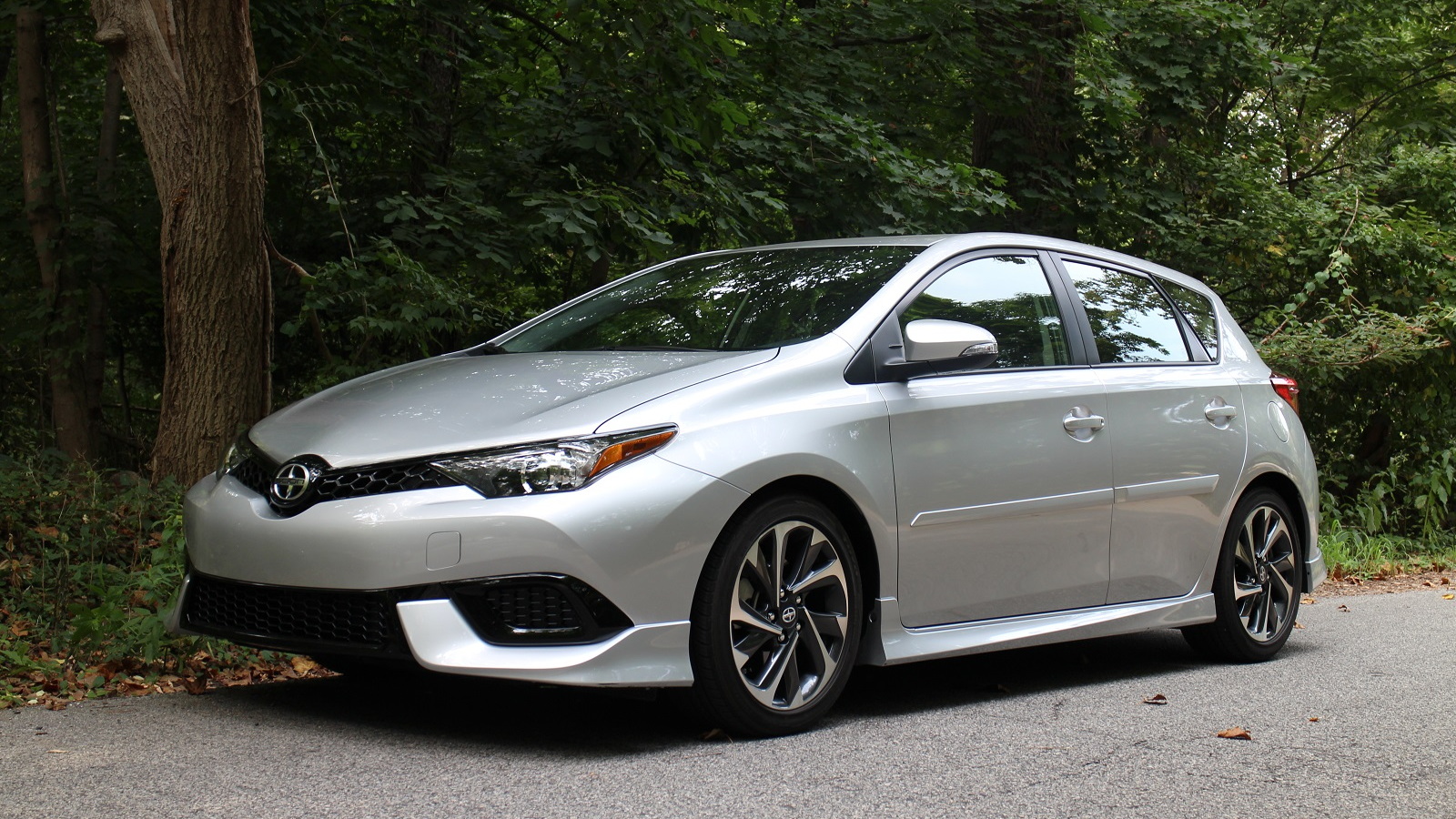 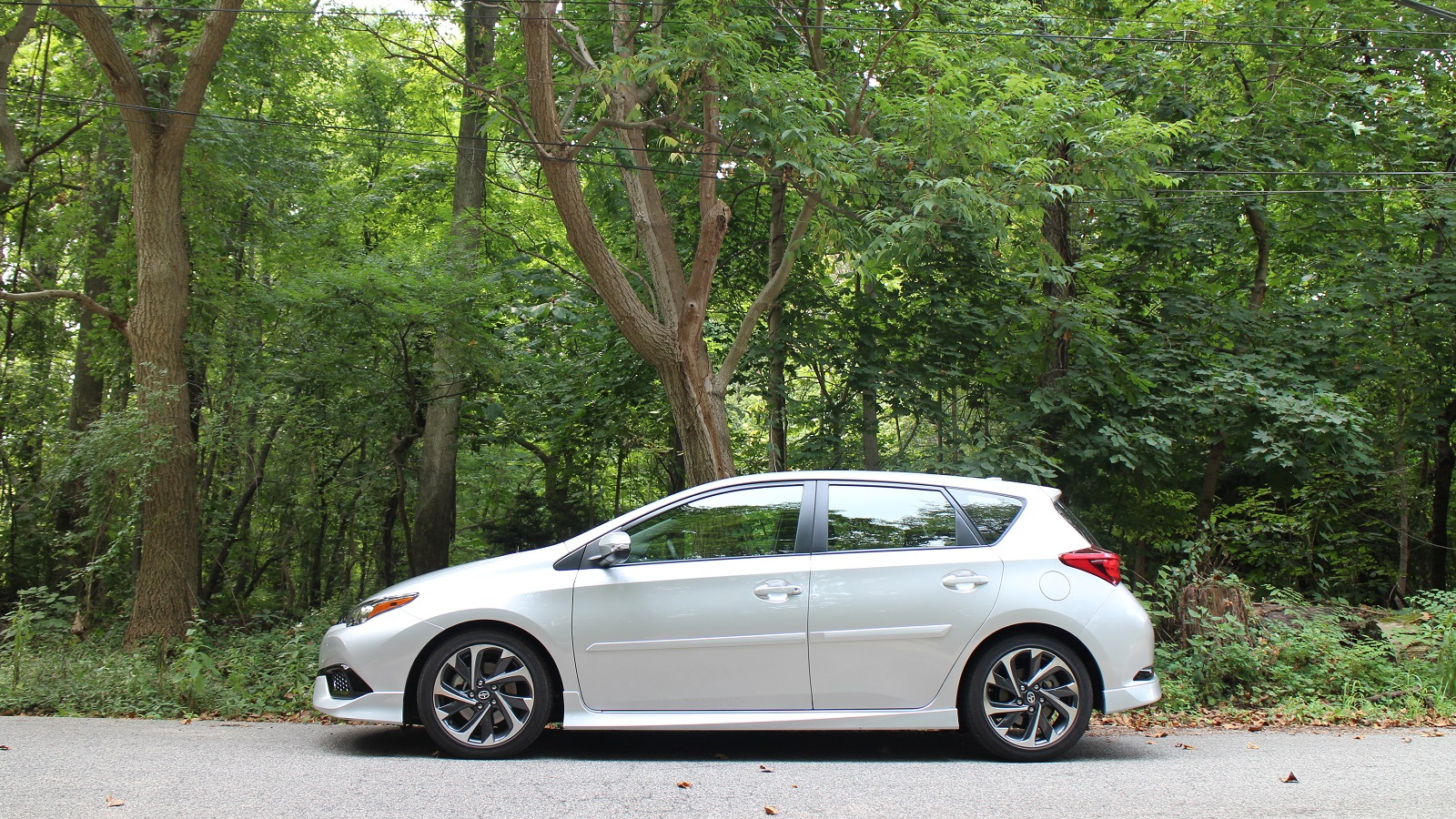 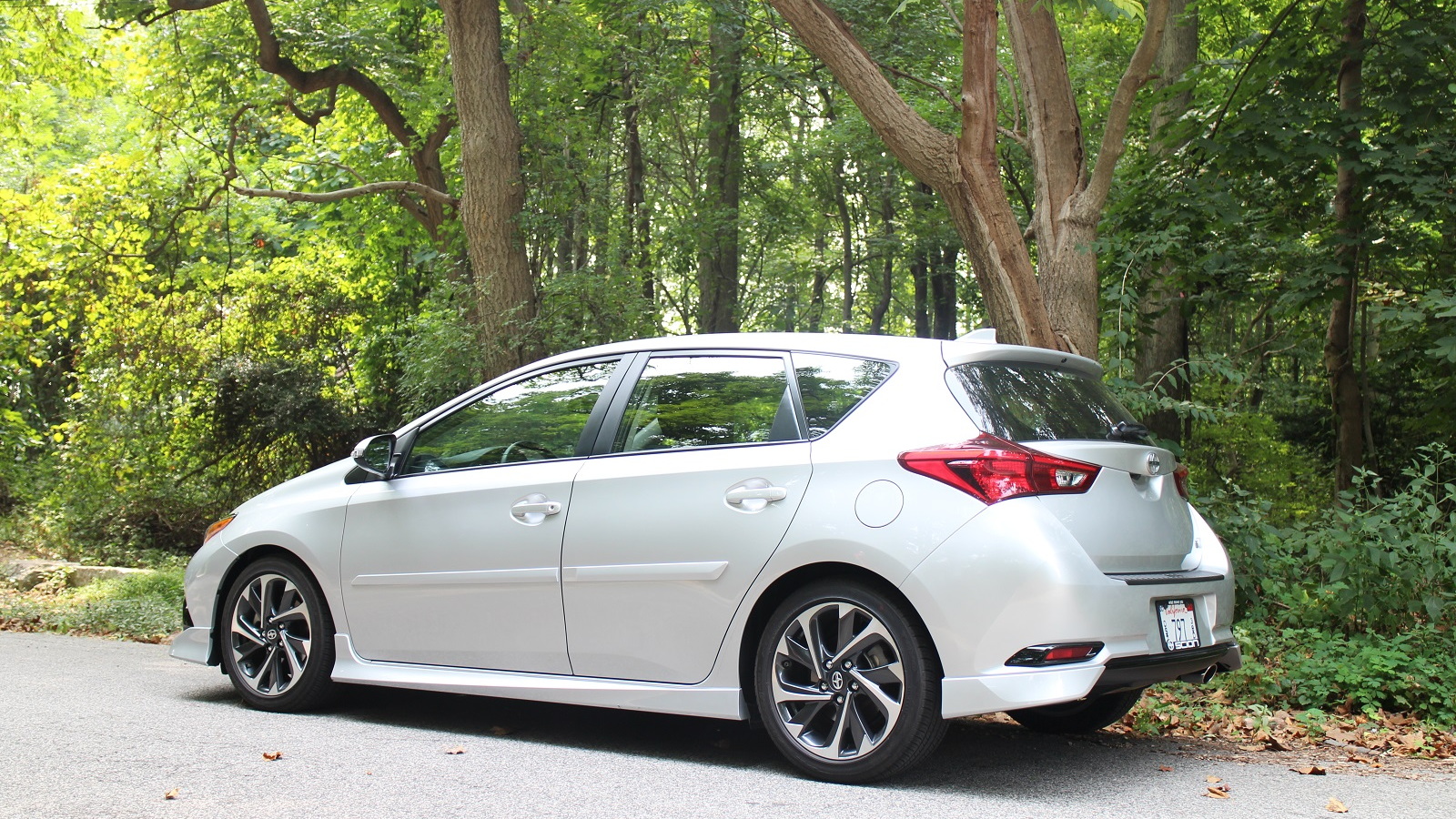 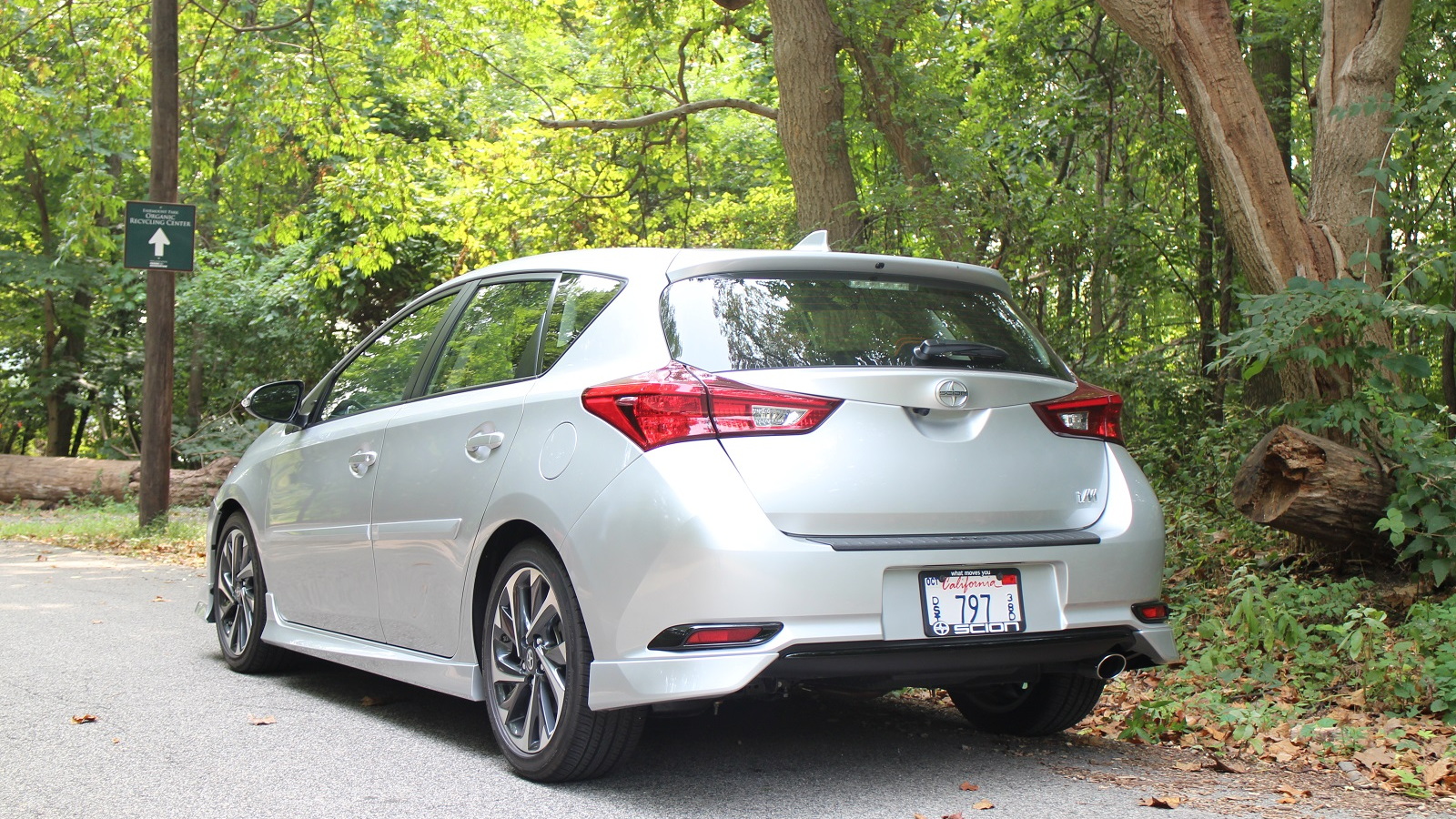 The 2016 Scion iM compact hatchback is the second two of new Scion models for 2016, joining the iA subcompact sedan.

It's part of a much-needed new lineup that takes Toyota's youth brand away from funky "tall box" cars or 10-foot-long urban cars and gives it a product that competes in the heart of the small-car market.

We were eager to drive the new iM, which can be considered effectively a Toyota Corolla five-door hatchback--but while it will likely make an adequate commuting car, we found it less enjoyable to drive than the smaller iA.

It's fuel-efficient, with its highest rating at 32 mpg combined, nowhere near the levels of the smaller car, which came in at 37 mpg combined.

That's particularly true for the version that comes with a continuously variable transmission (CVT), which Scion says will make up nine of 10 iMs its sells in the U.S.

The base Scion iM comes with a six-speed manual gearbox, and we'd pick that model. We acknowledge that most actual car buyers won't, however.

The 2016 iM is powered by a 137-horsepower 1.8-liter four-cylinder engine that's shared with the Toyota Corolla Eco, which we reviewed 18 months ago.

The CVT and its programming, however, come from the sportier Corolla S model.

And just to round out the family engineering that produced the iM, it's actually a relabeled Toyota Auris, a five-door hatchback most popular in Europe, where it outsells the Corolla four-door sedan it's based on.

That means it's fitted with a more sophisticated double-wishbone rear suspension, for sportier handling and roadholding than the torsion beam fitted to the Corolla sedan.

All North American Scion iMs will be assembled in Japan, however, not at the French plant that builds Auris models--including a hybrid--for the European market.

You can view it, if you like, as more or less a replacement for the Toyota Matrix five-door hatchback that ended production after the 2013 model year.

The Scion iM doesn't offer the optional all-wheel drive that made the Matrix a forerunner of such hatchback-based crossovers as the Subaru XV Crosstrek, however.

That Focus model is only offered with a six-manual manual gearbox, however, so it'll remain rare on the roads.

The lines of the 2016 iM are essentially those of a conventional compact hatchback with a little attitude in its front and rear.

The rear profile looks surprisingly like the current Hyundai Elantra GT hatchback, to the point that two experienced auto writers both mistook the latter for the former on the road.

There's plenty of room inside to seat four 6-foot adults, though the rear backrest angle was reclined more than some may find comfortable.

Inside, the look is pretty much standard-issue Toyota, with a high dashboard cowl and a largely black color scheme.

We did wonder how well the swathes of piano black trim--not only around the Pioneer audio system's 7-inch touchscreen display but also on door-panel inserts--would last without tiny scratches, not to mention the dust they accumulate.

We drove a pair of iMs, one CVT and one manual that was also fitted with optional TRD (Toyota Racing Division) lowered suspension and alloy wheels.

Our main impression of the CVT-equipped car was that it droned and whined to a surprising degree when asked for substantial power.

We weren't racing around, mind you; that was just in half an hour of heavy stop-and-go Philadelphia rush-hour highway traffic.

While the car felt slightly heavy for the available power, the ride was smooth. We were surprised at the amount of tire noise transmitted into the cabin on harsh road surfaces, though.

The iM's European focus shows through slightly in its electric power steering, which provided better road feel than most other Toyota products.

The brakes, on the other hand, were squishy and felt less firm and predictable than those of the smaller iA. They worked fine, they just didn't give a particularly nice pedal feel.

Inside, we noted with amusement the switch on the driver's door for power folding heated mirrors--an unusual feature on compact hatchbacks that comes standard as part of the "Monospec" single trim level meant to simplify iM ordering and stocking.

Like the iA, the only choices a Scion iM buyer faces are the transmission, paint color, and whether or not to fit a $900 navigation system wrapped into a package with a higher-end BeSpoke audio system.

The manual iM was more fun to drive, though it didn't come across as particularly powerful, requiring downshifts of as many as three gears to get maximum power at speed during that same rush-hour Philadelphia highway driving.

The suspension was definitely tighter, but while the car didn't look significantly lower than the stock model, it's been a long time since we've driven a car that hit its bump stops multiple times in standard driving.

Almost made us feel like a 24-year-old tuner kid, which was amusing--but not something we'd want to live with every day.

We weren't able to get any useful gas-mileage information on our relatively short drive loops, but we look forward to testing the Scion iM on our usual test cycle sometime this year.