All good things must come to an end, and so it is with the green stickers that give plug-in hybrid drivers access to California's freeway carpool lanes with just one person in the car.

A total of 70,000 stickers were allotted, and the supply is now almost exhausted.

A bill to allocate 15,000 more stickers is pending in the California legislature, but even if it passes, those too will be snapped up in due course.

As of May 11, the California Air Resources Board notes that the state's DMV had issued 66,255 green Clean Air Vehicle stickers.

Some auto dealers will have applied for, and received, the stickers for cars they have registered but not yet sold--meaning that there will be plug-in hybrids still for sale at dealers with the coveted sticker. 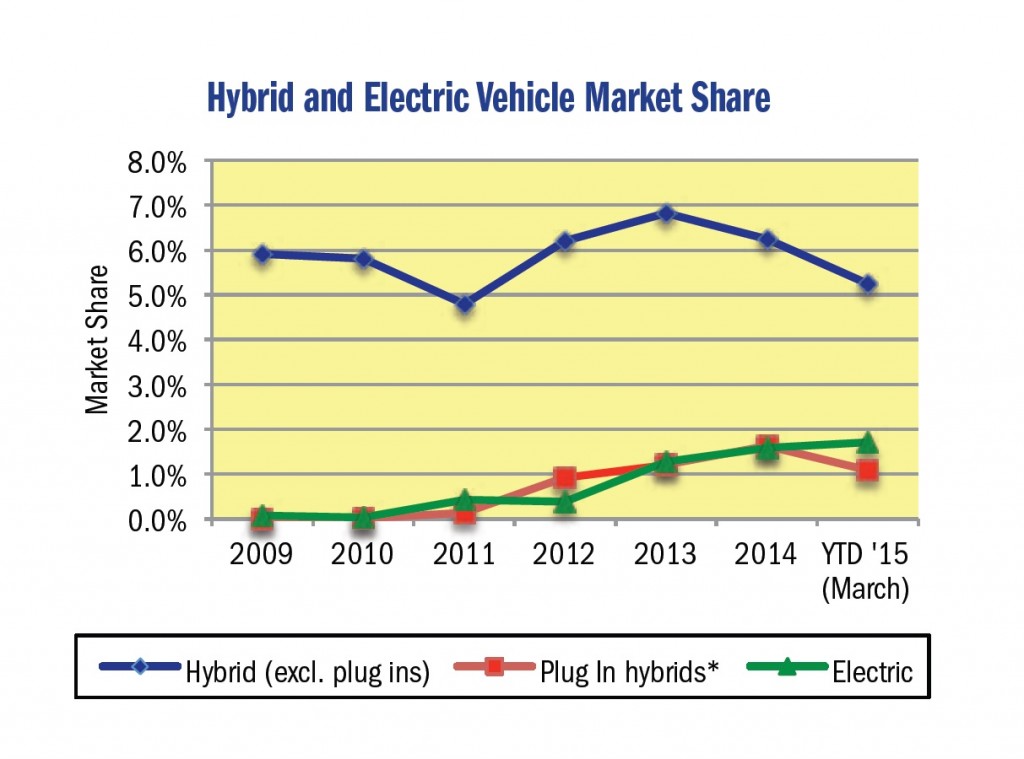 Thus far, the supply of white stickers is unlimited: They are granted only to zero-emission vehicles--battery-electric and hydrogen fuel-cell cars--as well as natural-gas vehicles.

So buyers of BMW i3s, Nissan Leafs, Tesla Model Ses, and other lower-volume electric cars have nothing to worry about at the moment.

But advocates and industry analysts will watch the sales figures with interest to see whether plug-in hybrids lose their luster once they're no longer eligible for a green sticker.

[UPDATE: We have added a new graph to this story, which was first published on May 19th. The graph, above, shows the market share of hybrids, plug-in hybrids, and electric cars in California from 2009 through the first quarter of 2015. The downturn in plug-in hybrid market share from December 2014 to March 2015 is immediately apparent.]

Sales of the Toyota Prius Plug-In Hybrid, which has the lowest electric range of any plug-in car sold in the U.S., have fallen dramatically since last  year, and the car will be withdrawn from production later this year.

The end of green stickers also means that the 2016 Chevrolet Volt, with a longer electric range (50 miles) than any other plug-in hybrid, will likely miss out on the incentives when it goes on sale this fall.

Meanwhile, a bill introduced last December to allocate an additional 15,000 green stickers was passed by the California State Senate May 7.

That bill, SB 39, has now been sent to the state assembly, where its prospects remain somewhat unclear.

Between low gas prices, making fuel economy less important, and the end of the green stickers, most analysts expect sales of plug-in hybrid vehicles to fall from the levels seen in 2013 and 2014. 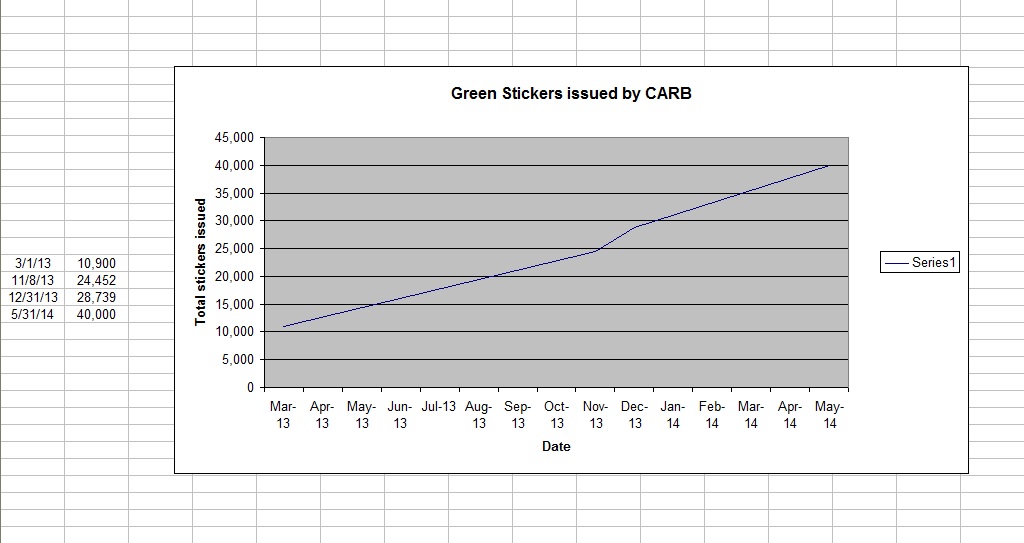 Graph of CARB HOV-Lane Access green stickers issued through Dec 31, 2013, w/projection thru May 2014

None of those vehicles is likely to be granted single-occupant access to the High Occupancy Vehicle (HOV) or carpool lane on California's crowded freeways.

But one side effect may be a rise in prices of used plug-in hybrids that carry the sticker.

An analysis that looked at prices of used hybrids with and without the yellow stickers that used to give hybrid cars similar carpool-lane privileges found that the sticker alone added $1,200 to $1,500 to the value of a used hybrid.

Presently, the green stickers for plug-in hybrids and the white stickers for zero-emission and natural-gas vehicles are valid through December 31, 2018.