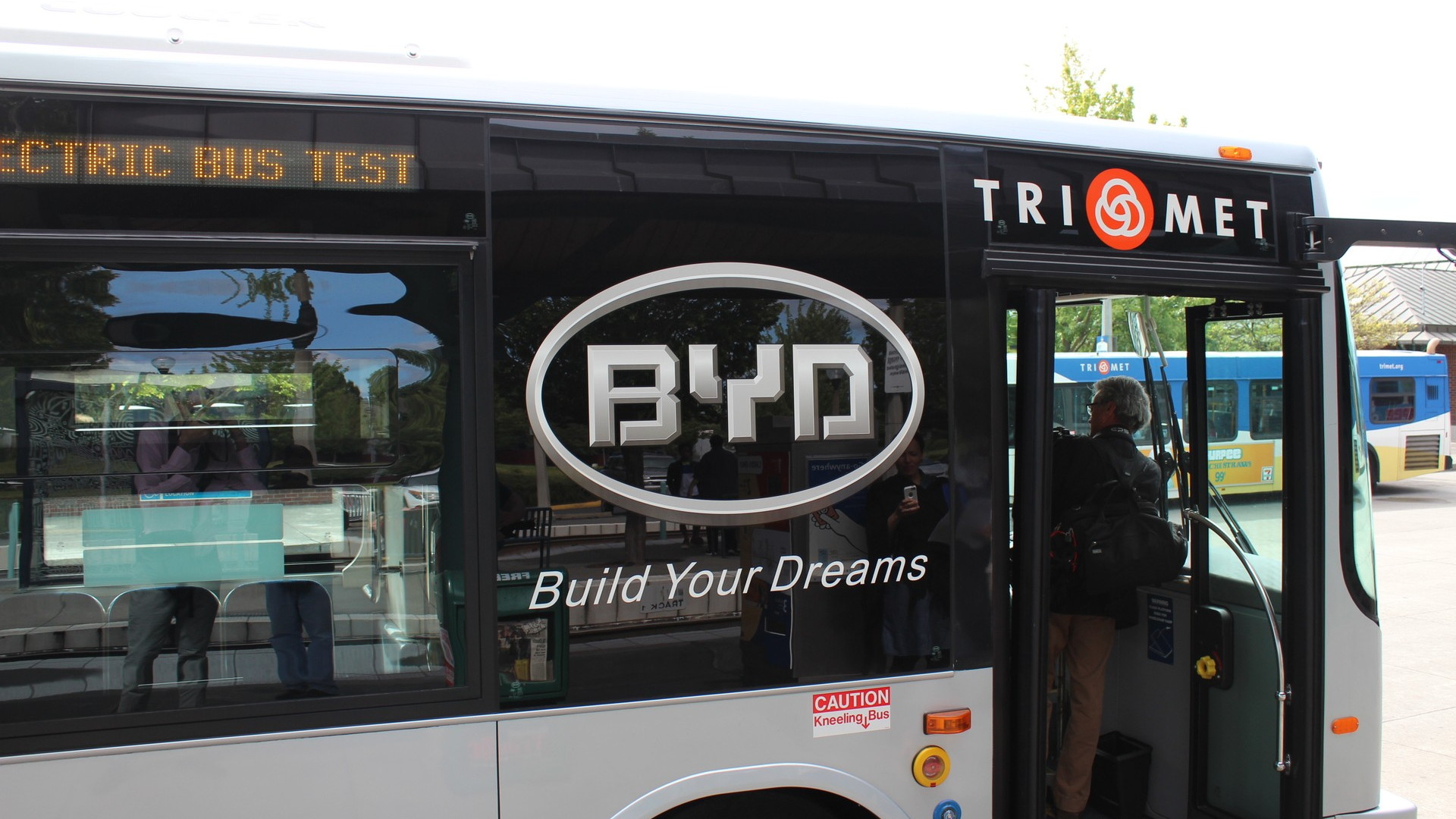 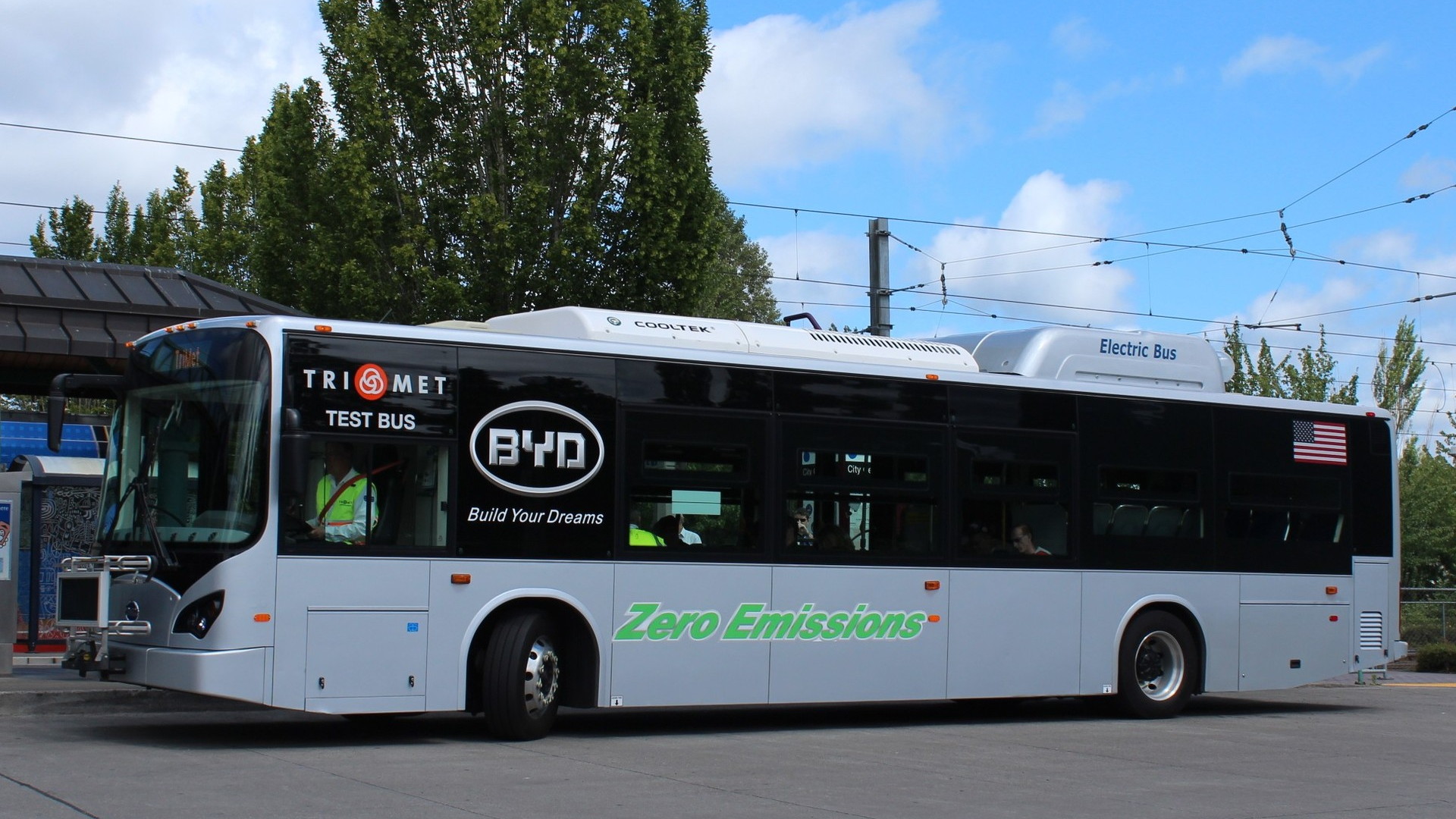 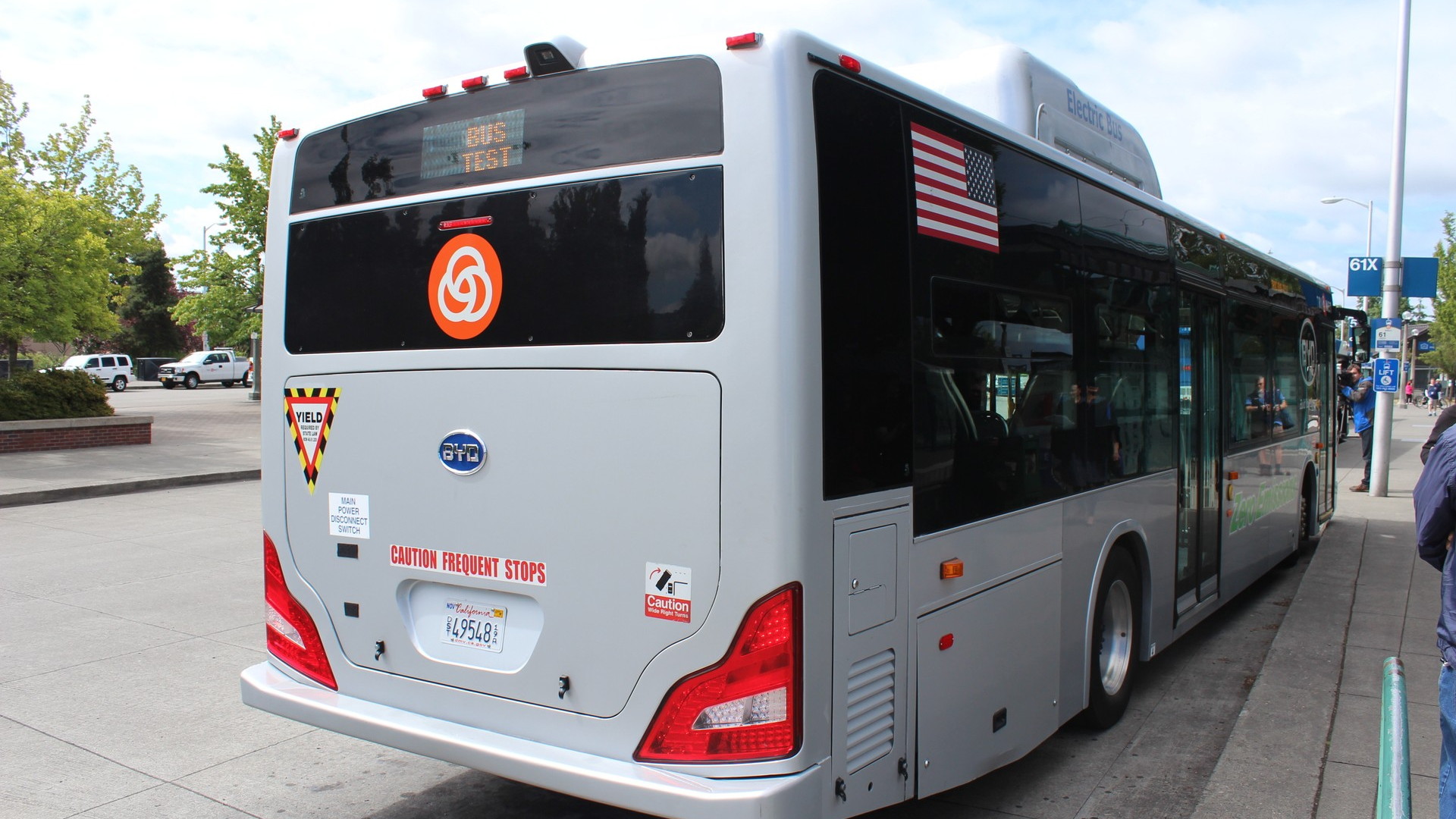 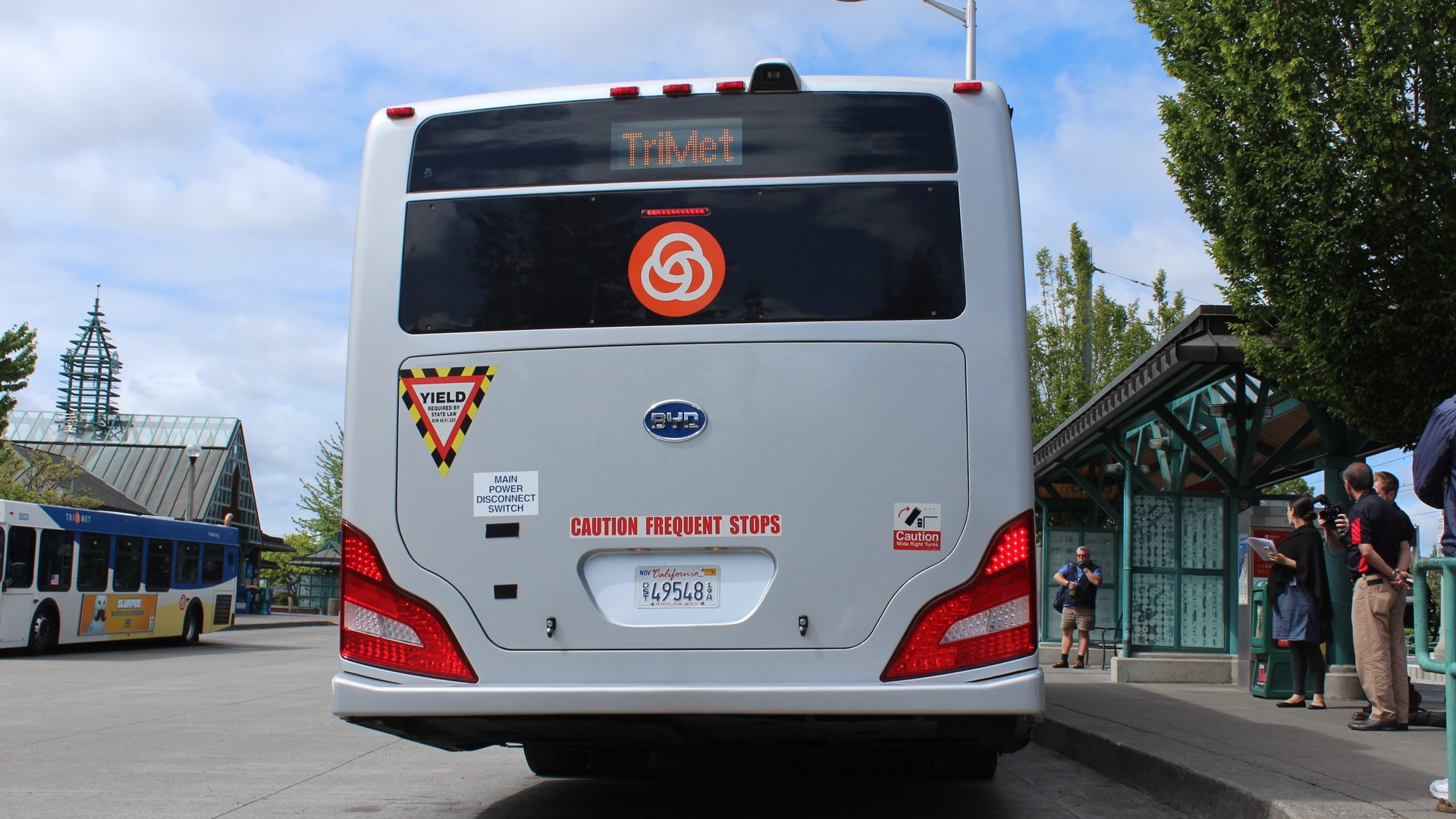 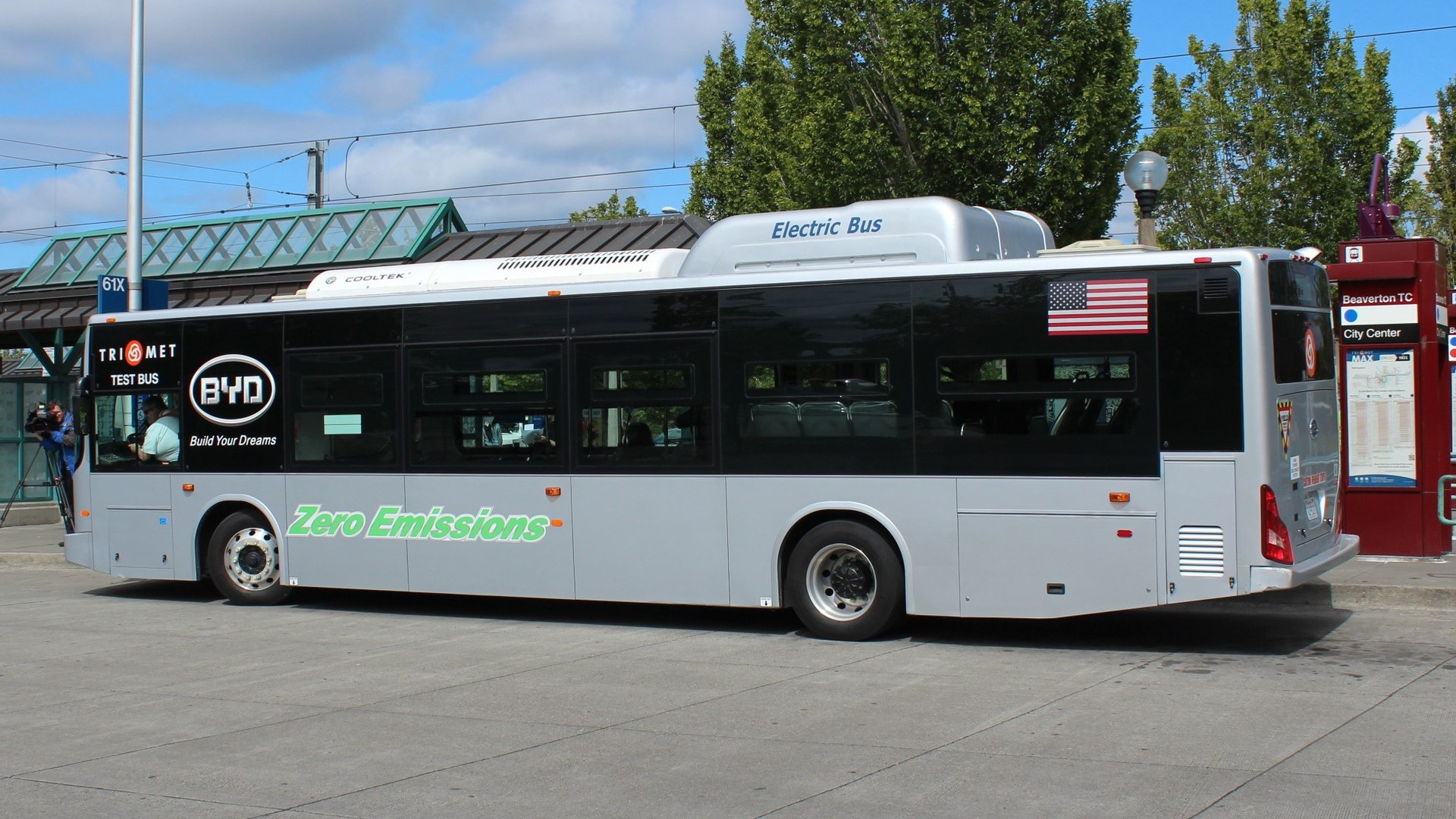 24
photos
If Warren Buffett needed to catch a ride across town, we suspect he might do it exactly the way that we did this past week: in an all-electric BYD bus.

While we’re still waiting for BYD to break through with its cars (at last check, it's still looking to introduce several new models to the U.S. market by the end of next year), it is already here with all-electric buses -- and looking to sign some major contracts with municipalities.

That’s in part why this K9 all-electric passenger bus is in Portland. The bus is a Chinese-built demonstration model, officially on loan from BYD, and is to be tested by Portland, Oregon’s metro-area transportation authority, TriMet.

For Portland, BYD’s claims for all-electric driving range and lower long-term operating costs -- and of course, the image of a zero-tailpipe-emissions vehicle that can seat dozens -- look pretty attractive.

And, with the Chinese company now set up for bus assembly in Lancaster, California, and fully federally compliant, always-green Portland might be the customer that they need.

We got to ride in this all-electric bus, and based on about 20 minutes in it, altogether, we can say that the future looks promising -- and sounds very quiet. Instead of the constant racket at the back of a diesel bus, it’s completely quiet when you’re at a standstill; acceleration brings only a quiet whine, and the A/C compressor and fan are the loudest components from the outside of the bus. You might be more likely to strike up a conversation with a seatmate, or not need to be bombarding your eardrums with music at such high levels.

And charging should come just once a day. Driving range, with no climate-control use, is 155 miles -- which BYD says is good for a full day of typical bus use -- and it’ll use just 1.92 kWh per mile.

For eight days in all this month (weekdays from June 23 through July 3), this bus will be placed into full-time duty, pitching in not on a normal route, but offering extra trips, free of charge, between scheduled service.

Tri-Met intends to ‘test-drive’ the bus in full duty, including plenty of stops and starts, passengers in and out, and climate-control use during a time when Portland is actually quite sunny and hot. The goal is to see if it can deliver full service for the whole day without a charge.

Batteries for a full day, fast-charges: 5 hours or less

Longer-term, Portland is considering options for upping its electric-bus fleet, and with that they’d like to install inductive charging in bus garages. While we’re not sure how long that might take, with high-voltage AC fast-charging (and the nice thing about fleet use is that you’d never need to worry about 120V or 240V), the 324-kilowatt-hour battery pack can be charged up in just two to four hours typically, after a day of use, or five hours from fully depleted to 100 percent.

That battery pack is actually three separate 108-kWh packs, riding on the roof of the bus in a special enclosure. Each of those packs weigh a little more than a thousand pounds, so total battery weight is, at an estimate, around 3,200 pounds.

Inverters and controllers are placed at the back on a high ‘shelf' in what would normally be the engine compartment, while the A/C compressor is down below. So are two radiators, one against each side of the bus, that look like they could have been lifted out of a front-engine minicompact like a Mitsubishi Mirage. They’re for the battery’s liquid-cooling system, which pumps coolant up to the cells, cycling the fans on as needed.

Just as with electric and hybrid cars, the buses have regenerative braking that can, with some lighter loads, essentially keep the friction brakes from doing much work -- greatly extending the intervals for replacing pads, which can be quite costly for buses.

The K9 is available with a solar roof, but the one that’s being tested by Portland does not have this option.

The battery chemistry itself is what continues to separate BYD from the rest of the industry. You won’t find any common lithium-ion or lithium-polymer cells here. Instead, the lithium-iron-phosphate (LFP) cells used in the bus offer greater longevity and more stability, the company claims--just as in the BYD electric cars that aren't available here.

The battery packs themselves, and the modules within, are assembled in California, using cells from China. Thus far, the Lancaster facility employs about 100, although the workforce could become several times larger with any major U.S. contract.

Although the company has made inroads in Mexico, so far BYD’s largest contract in the U.S. is with Stanford University, where there have been three all-electric buses in regular use since September, with an order for 12 more now in.

But the BYD buses have have already been proven elsewhere. This is BYD’s second electric bus design for sale, a model that’s been in service since 2005, and more than 2,000 of them have been placed into service, with more than 600 of those outside China (Brazil and India are among the markets).

What’s the cost? While we can’t say exactly, Phillip Woolen, the North American maintenance director for BYD, confirmed that a typical (diesel) U.S.-spec bus, of the type that Portland seeks, costs about $400,000. The BYD buses vary quite widely in cost, depending on build and contract, but run “more than 50 percent” higher than those conventional buses.

Worthy of a federal grant?

To pay for that, TriMet has submitted a grant proposal to the Federal Transit Administration (FTA) for $5.63 million, and there’s about a $5.35 million local match, all going to purchase nine all-electric buses (not yet confirmed as BYD models) and install charging stations.

Federal transportation funding requires that buses have more than 60 percent domestic content, and BYD’s Woolen said that at Lancaster they can build the K9 with up to 80 percent as required.

Pedestrian safety is another concern here. With these buses making very little noise -- especially as they approach from the front -- will there be more danger to pedestrians?

BYD says it isn’t aware of any rise in pedestrian incidents associated with these buses in other places where they’ve in use, but says it’s working with concerned groups to make sure that the buses emit low-speed noises that pedestrians will be able to hear in noisy places.

As for worries about end-of-use scenarios, BYD describes its iron-phosphate chemistry as non-toxic, and frequently uses the term ‘disposable’ for its battery, which we’re also curious about -- as a representative talked not about end of use but instead focused on describing all the ways that its cells and battery packs could be repurposed.

That’s because, after all, the cells are estimated to last 20 years and beyond--while a typical bus, through primary and secondary owners, is on the road for 12 to 15 years.

While some of these numbers will have to stand up to the test of time, this is perhaps the best real-use test of BYD and its unique battery chemistry on these shores.

In anticipation of the next, better round of electric cars headed to these shores, we’ll be following up with TriMet to see if the bus--and perhaps more importantly, the battery--lives up to its company’s claims.