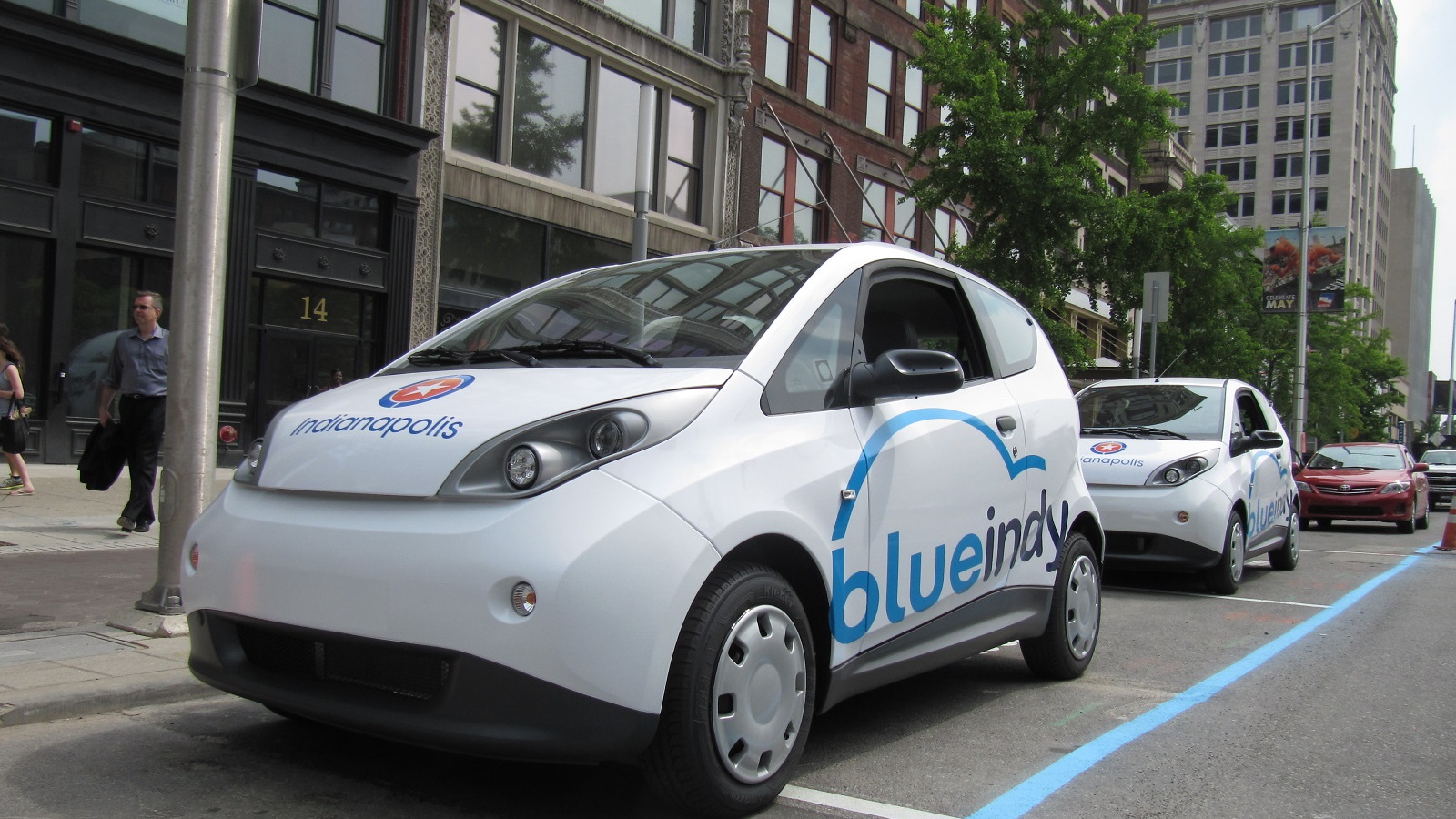 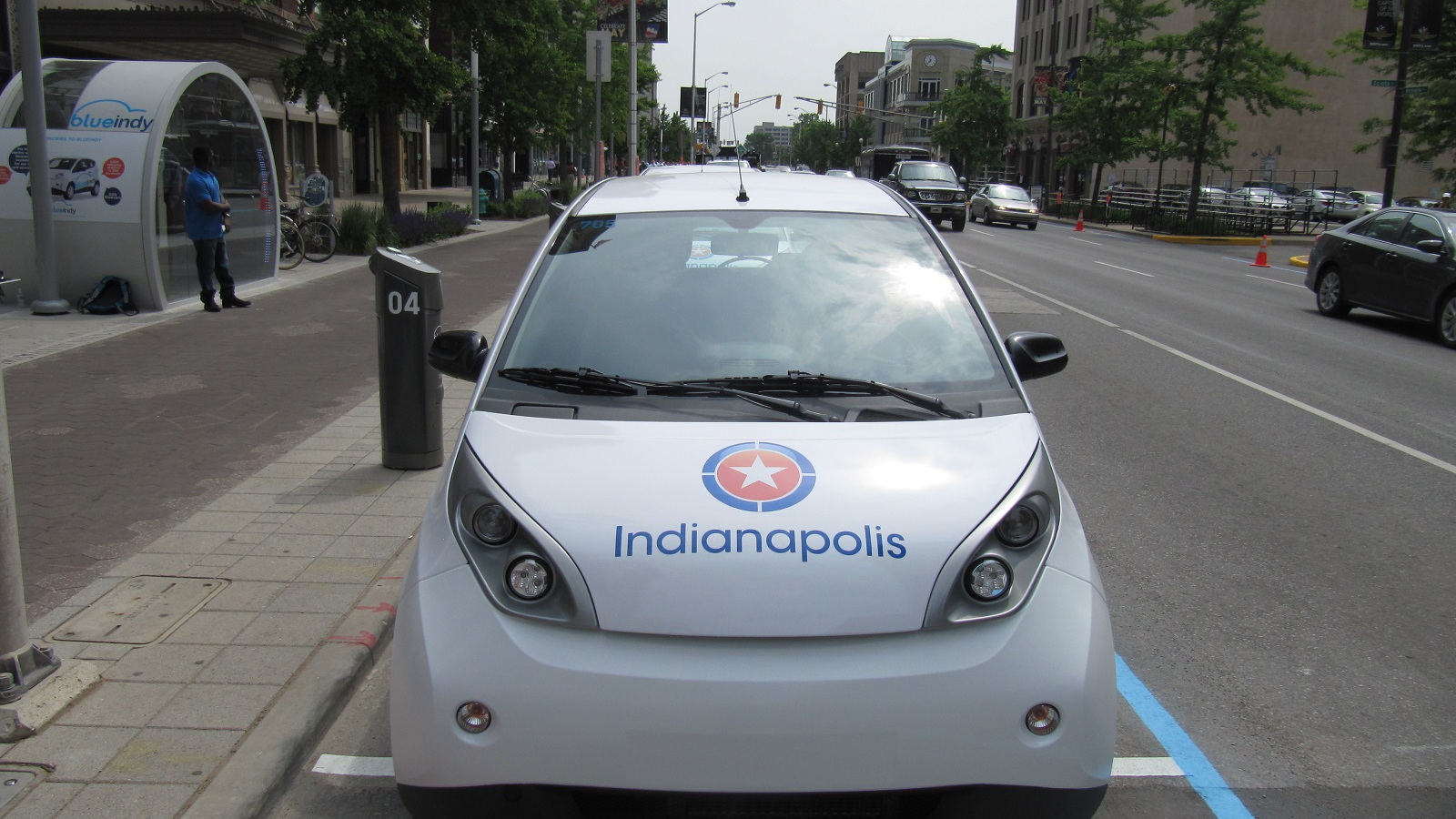 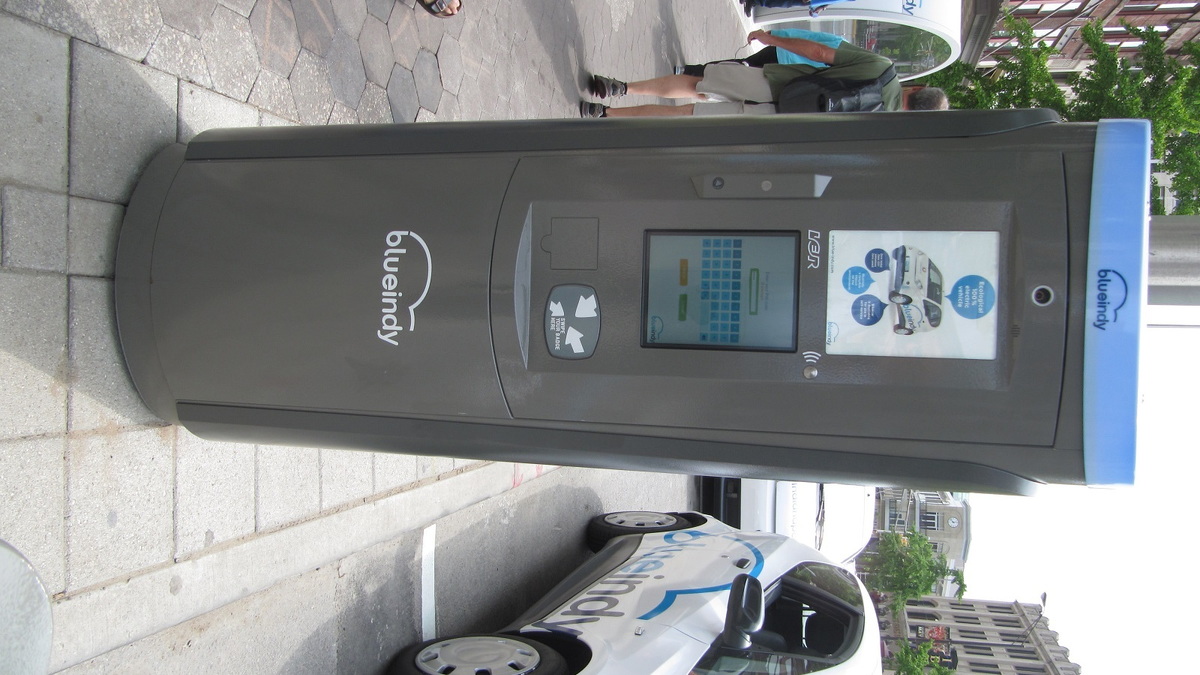 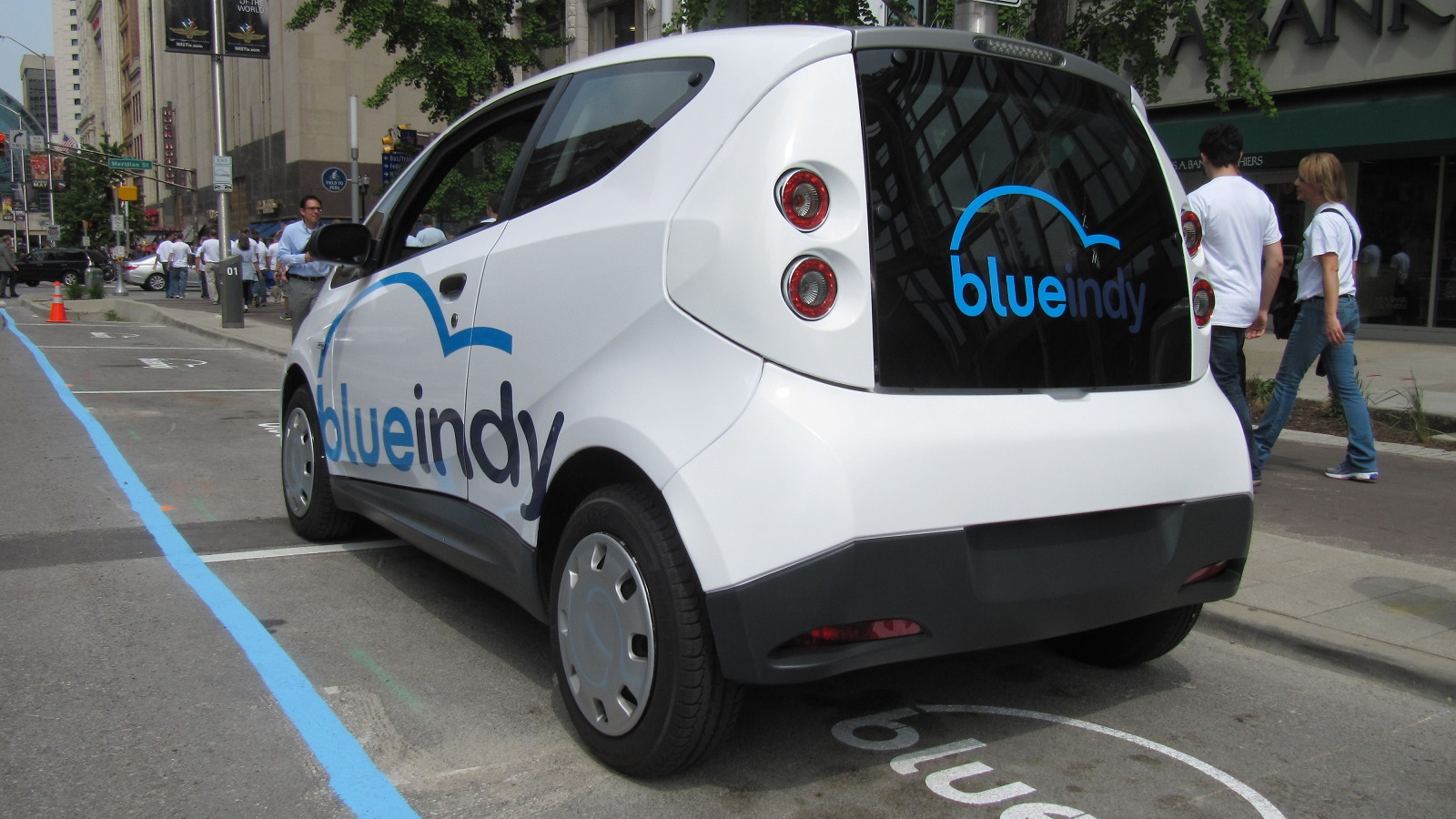 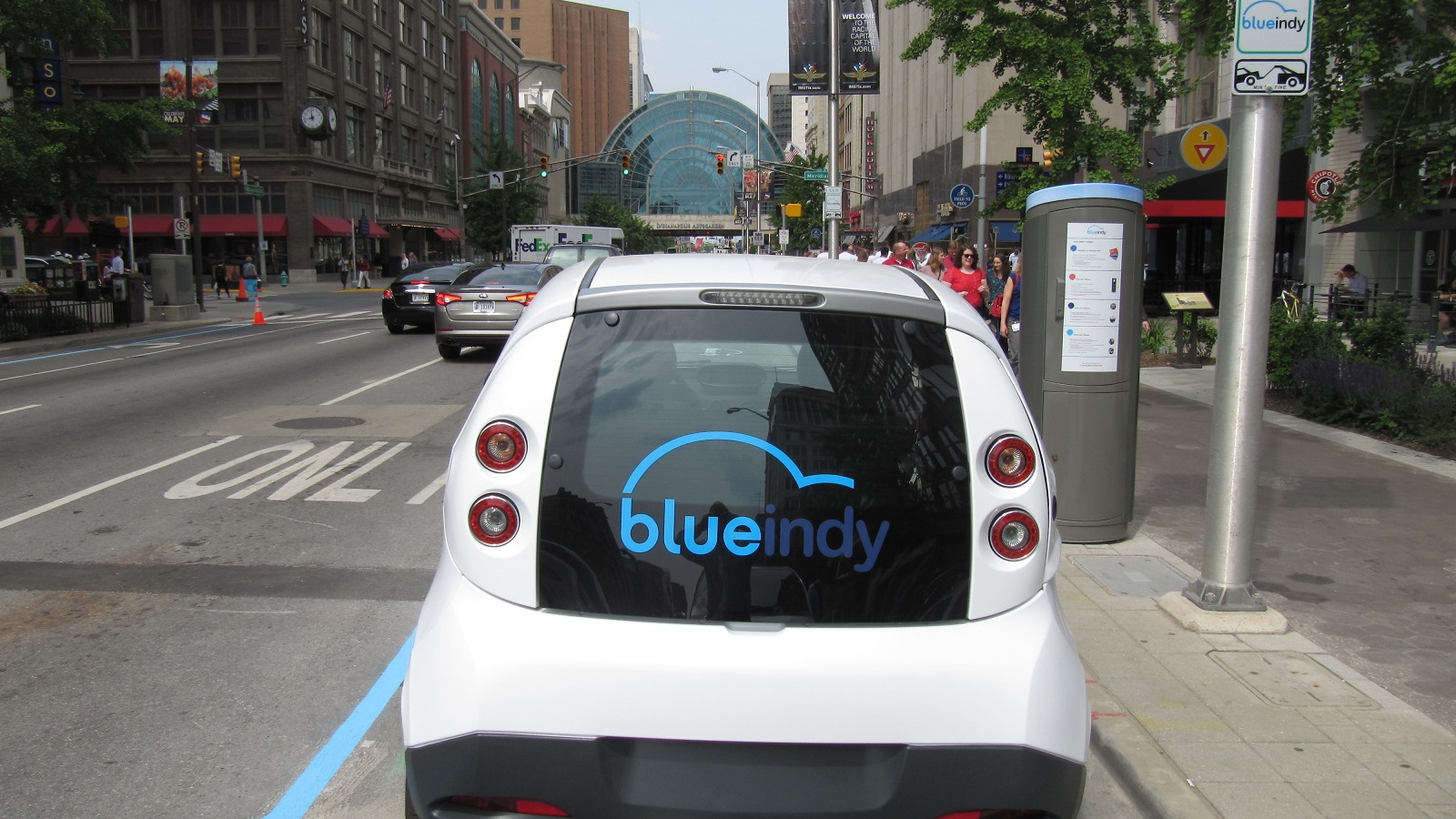 While you might expect a city-wide electric car-sharing service in Paris--or perhaps progressive havens like San Francisco or Santa Monica--the midwestern city of Indianapolis may not be the first such place you'd look for an all-electric car-sharing plan.

Nevertheless, the city announced the BlueIndy car-sharing service this week; it will launch for customer use in December, and we've driven a prototype Bollore BlueCar to see how it works.

On Wednesday, we drove around downtown Indianapolis for half an hour while chatting with the energetic Herve Muller, vice president and general manager of BlueSolutions, which will operate the system.

If the BlueCar looks vaguely familiar, it's because it's the same vehicle used in the very successful Parisian Autolib system.

To say it's basic would understate the case; while it's a perfectly competent three-door, four-seat compact electric hatchback, its no-frills approach is slightly reminiscent of the "econoboxes" sold 20 years ago.

But the plain appearance belies some sophisticated car-sharing software and a few clever design features.

MORE: Car Sharing: The Job For Which Electric Cars Are Already Perfect

It's clear that these are short-duty, around-town, convenience-based appliances--not cars you'd choose to drive across the state in.

In other words, they're the automotive equivalent in the Midwest to the CitiBike bike-sharing system in New York City, whose sturdy bright blue bicycles can be seen all over lower Manhattan piloted by younger New Yorkers.

(The CitiBikes have been a huge hipster hit among younger residents, but getting tourists to use them has been much harder than expected.)

Every BlueIndy car-sharing location--200 are planned--will have five parking spots along the curb, each with a charging station whose cable sits under a cover that unlocks once a registered user touches the membership card to the RFID reader.

In the prototype location set up on Washington Street, there is also a curved-roof kiosk--Muller refers to it as "the bubble"--where new users can enroll via videoconference with a remote service center. There will be 20 of those at central, high-traffic locations as well.

For the December launch, BlueIndy plans to have 25 locations up and running, each with five cars and charging stations. Then it will add new locations weekly throughout 2015.

The enrollment takes about five minutes, he says, and then a validated membership card drops into a slot once registration is complete.

Pricing is still being set, Muller said, but he expects a weekly membership to be $10 to $15, or an annual one--paid up front--to work out to roughly $13 a month.

Then usage fees will start at $5 for 20 minutes, with an hour costing $15. Most usage will be less than an hour, underscoring the short-term sharing appeal.

Users can reserve a BlueCar on the web or via smartphone app--or simply by walking up to any location that has cars.

The software figures out the BlueIndy location closest to their destination; they simply unplug the car, drive it from one site to the next, plug it back in, and walk away. Billing is handled automatically.

(Reserving a car ahead of time is a better way to guarantee availability; it's possible that a site may have one or two cars parked there, but they will have been reserved already.)

Making the reservation requires the user to respond to three basic legal questions--basically, you have a valid driver's license, you understand the risks, and you're not drunk or high--and then the system assigns you a specific car, say, "Slot 03."

To drive the BlueCar, you simply tap your card on a sensor in the left-front window, which unlocks both the car doors and the panel over the charging port, and then tap again on the charging station to unlock the lid.

Then the driver simply removes the charging cord, lets it coil back into the station, closes the lid, steps into the car, and drives away.

Unlike Paris, where the Autolib system's cars are all silver--their aluminum bodies covered in nothing more than an anti-tarnish clear coat--the BlueIndy cars are painted white, with large blue graphics highlighting what they are.

The one we drove was a European model, minimally modified for U.S. duty, but the "BlueCar 2.0" will be updated to meet North American vehicle regulations.

It will also have gone through all National Highway Traffic Safety Administration crash testing, Muller said, and it will gain roughly 5 inches in length from different front and rear bumpers.

Once inside the Bollore BlueCar, the driver sees a single touchscreen in the center of the dash, serving as both instrument cluster and infotainment-navigation system.

There are a few buttons in the lower part of the dash, including a blue emergency-call button that connects the occupant directly to the BlueIndy call center via the car's built-in cellular link.

One clever feature of the display system is that because the car "knows" its driver, it preloads that user's favorite audio selections, along with saved destinations in the navigation system and other personal information--meaning the driver knows what to expect as soon as the car powers up.

There's a shift lever with only three positions--Forward, Reverse, and Neutral--and Muller says BlueIndy will have to train U.S. drivers to engage the parking brake before exiting the car.

That's standard practice in Europe, but not so much in the U.S. where the "Park" setting on automatic transmissions is presumed to suffice.

The seating position inside a BlueCar is upright, with good visibility forward, although the windshield pillars are surprisingly thick and create a blind spot despite small triangular windows ahead of the door.

The rear seats are minimal, but four people can fit into the car for short trips. They're likely to be be more comfortable, however, if they're built more like slender Parisians than beefy Midwesterners.

A small cargo hold behind the rear seat is accessed via a glass-panel hatch, but there's no external release--the hatch must be popped open from inside the car.

Once underway, the BlueCar rides firmly but seems to soak up pavement irregularities with ease. It corners well, though its tires squealed on sharp turns; those two factors together lead us to think it has relatively soft, pliant tires.

U.S. BlueCar drivers will have to get used to the lack of the idle creep found in automatic-transmission cars (an early problem on the Tesla Model S; the company finally updated the car's software so drivers could choose whether or not they wanted idle creep.)

Acceleration is adequate after the first second or so, though it's probably slightly below average for U.S. urban traffic.

We didn't get a chance to take the car on any freeways--its maximum speed is about 80 mph--though Muller expects the BlueIndy fleet to see regular usage along the freeway to and from the Indianapolis Airport, just 13 miles from downtown.

The regenerative braking is noticeable--not BMW strength, but far stronger than that of the Nissan Leaf, whose default mode mimics a conventional automatic transmission car--and with a few minutes of training, we were able to coast neatly down to stoplights.

In its floorpan, the BlueCar has a large 30-kilowatt-hour lithium-ion battery manufactured by Bollore. (By way of comparison, the larger, heavier Nissan Leaf has a 24-kWh battery pack in its floor.)

On the European cycle, that gives it a range of 130 miles; we'd guess its U.S. EPA rating might hit 90 or possibly even 100 miles, depending on the efficiency of its 50-kilowatt (67-horsepower) electric motor.

The battery chemistry, however, is designed to run hot--ideally at 60 degree C, or 140 degrees F. The car uses energy to keep the battery hot, but needs no liquid or forced-air cooling system, unlike other lithium-ion chemistries.

That's one reason, however, that it's important to keep the cars plugged in when not in use: A week-long cold soak can deplete the battery entirely.

On the other hand, the big battery should mean that using the climate control--whether heat for cold, snowy winters or air conditioning during muggy summers--has less impact than it might in other smaller electric cars.

BlueSolutions is the Bollore unit, based in Atlanta, whose mission is to spread its electric car-sharing system across the U.S. Its vice president Muller is a cheerful promoter who's upbeat but realistic.

The company chose Indianapolis as its first launch site, he said, entirely because of the political support of Mayor Greg Ballard--an Iraq War veteran who plans to move as many of the city's municipal vehicles to electric power as possible.

And it is also expanding into London, including taking over many public electric-car charging stations and networking them to allow centralized control and reservations.

And the company has learned over time how to deal with operational challenges, including uneven distributions: It will send employees out en masse to bring cars to popular sites (commuter-rail stations, for instance).

It also offers a free-trip coupon to suburbanites who bring a BlueCar back the next morning from a remote suburban location to a more central station.

And, Muller says, the company expects the Paris system to be profitable three years after its launch.

So how will Hoosiers react to the idea of French car-sharing in odd-looking little electric vehicles in the center of Indianapolis?

The cars certainly attracted a lot of attention, and the "Ambassadors" in blue shirts staffing the demonstration site answered a steady stream of questions--especially from younger people (I'd estimate 35 and below).

Nearby colleges and universities are expected to be a source of enrollment, as are local businesses whose employees need options for local travel.

And given Mayor Ballard's all-out support for the concept, and for electric cars in general--he was able to get Indiana Power & Light to agree to build the necessary instrastructure--you can imagine that the city will do its best promote such a unique asset.

In the end, what the song famously says about New York probably applies as well to electric car-sharing in Indianapolis: "If you can make it there, you'll make it ... anywhere!"