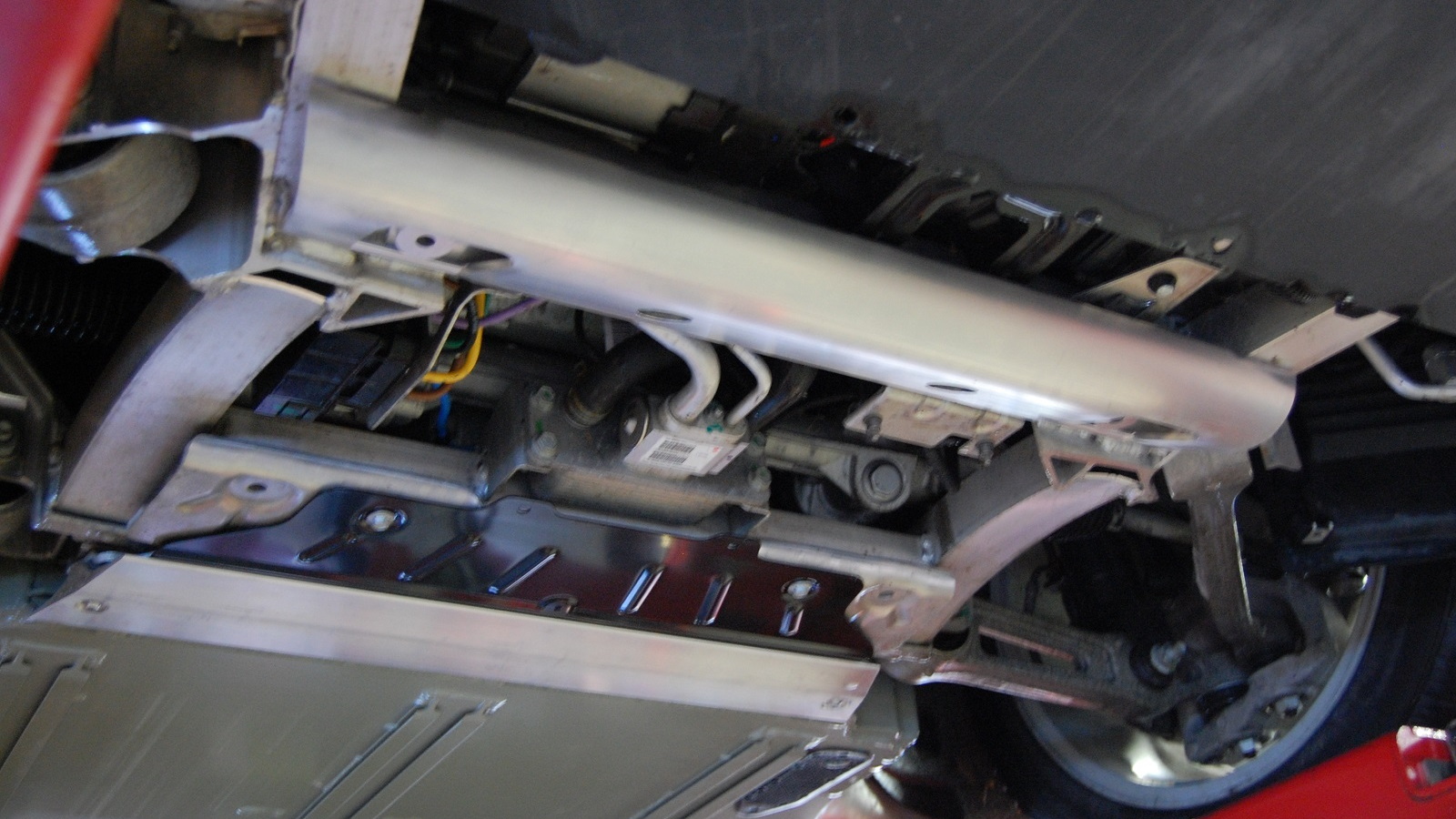 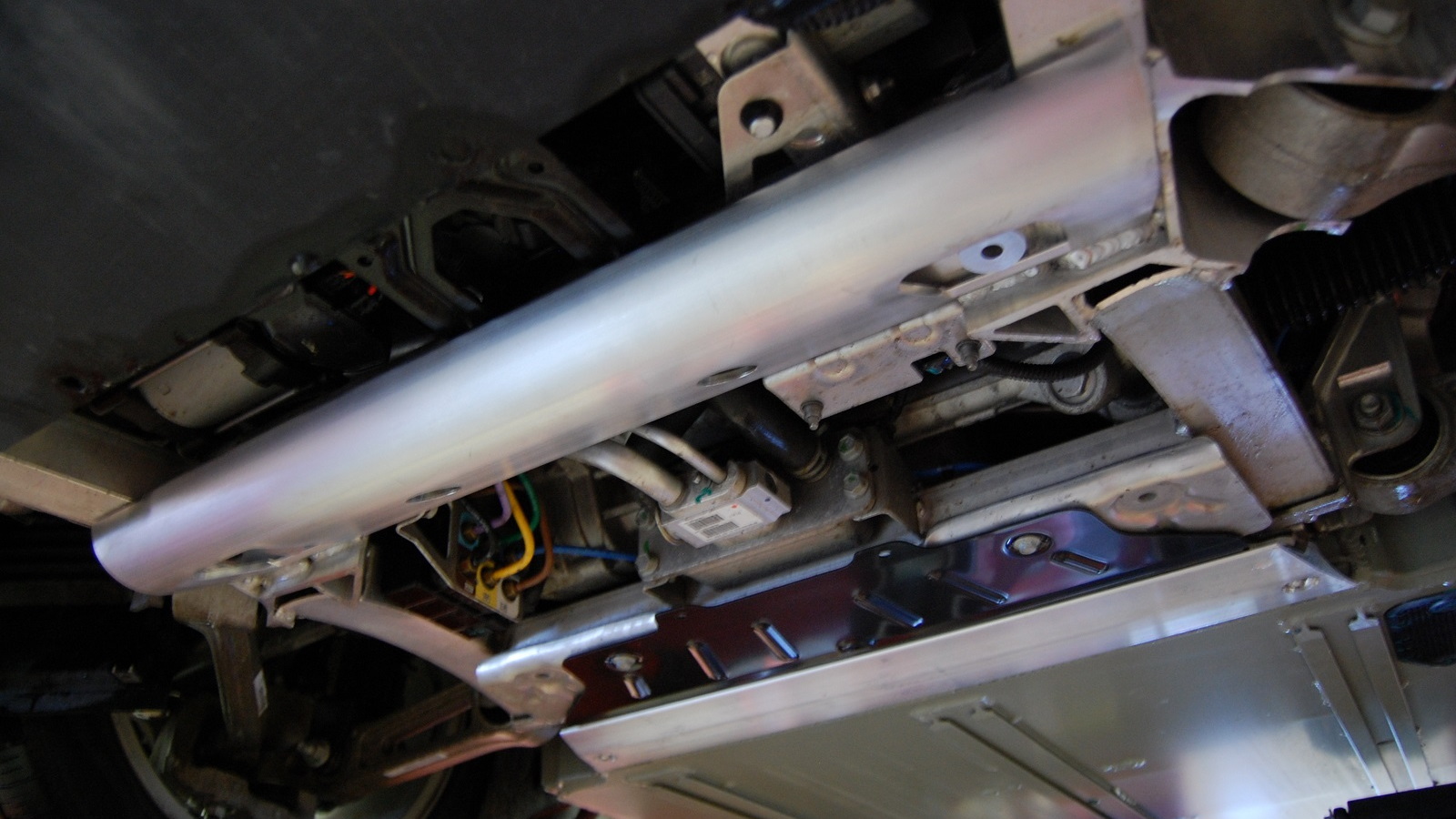 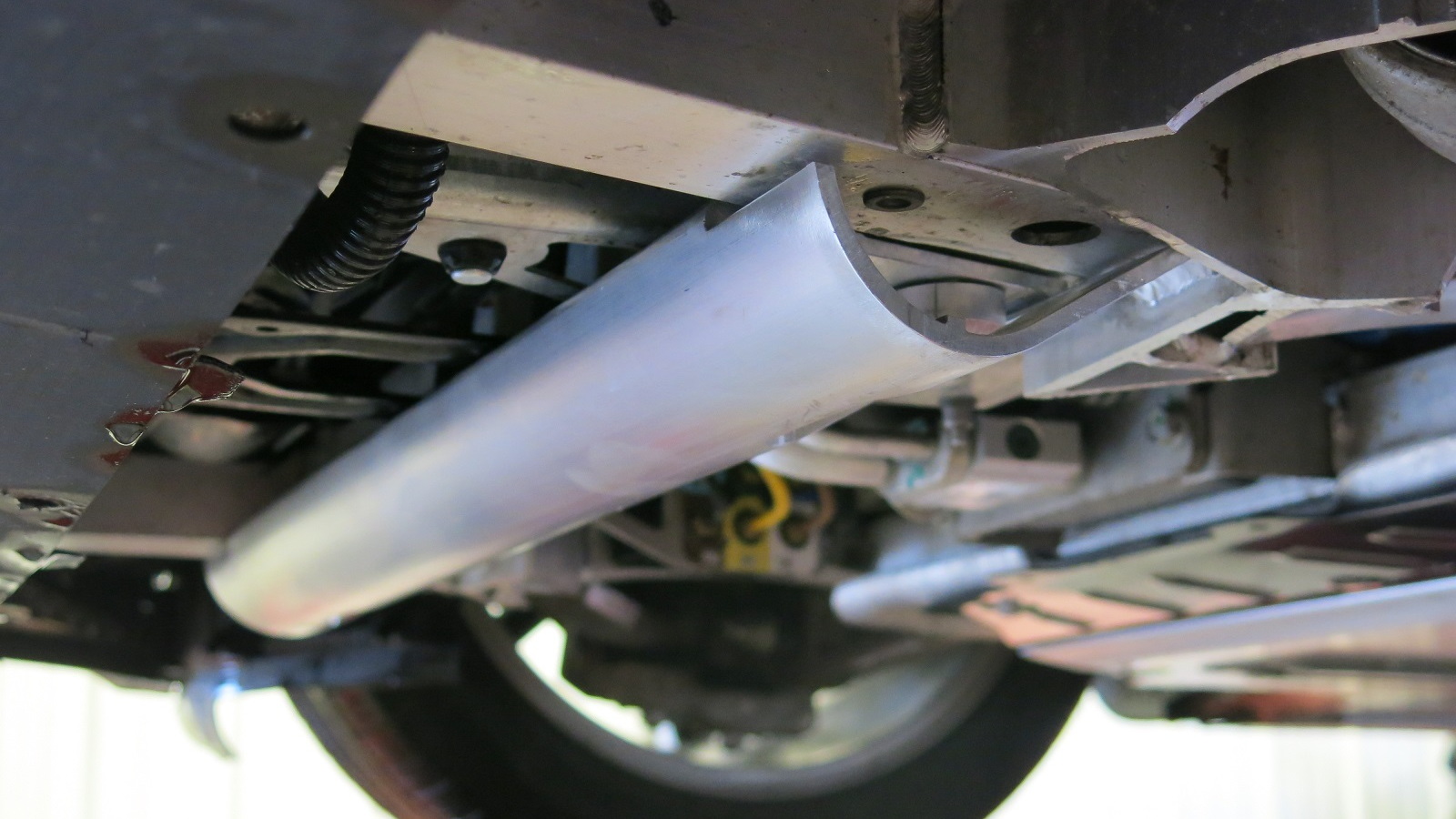 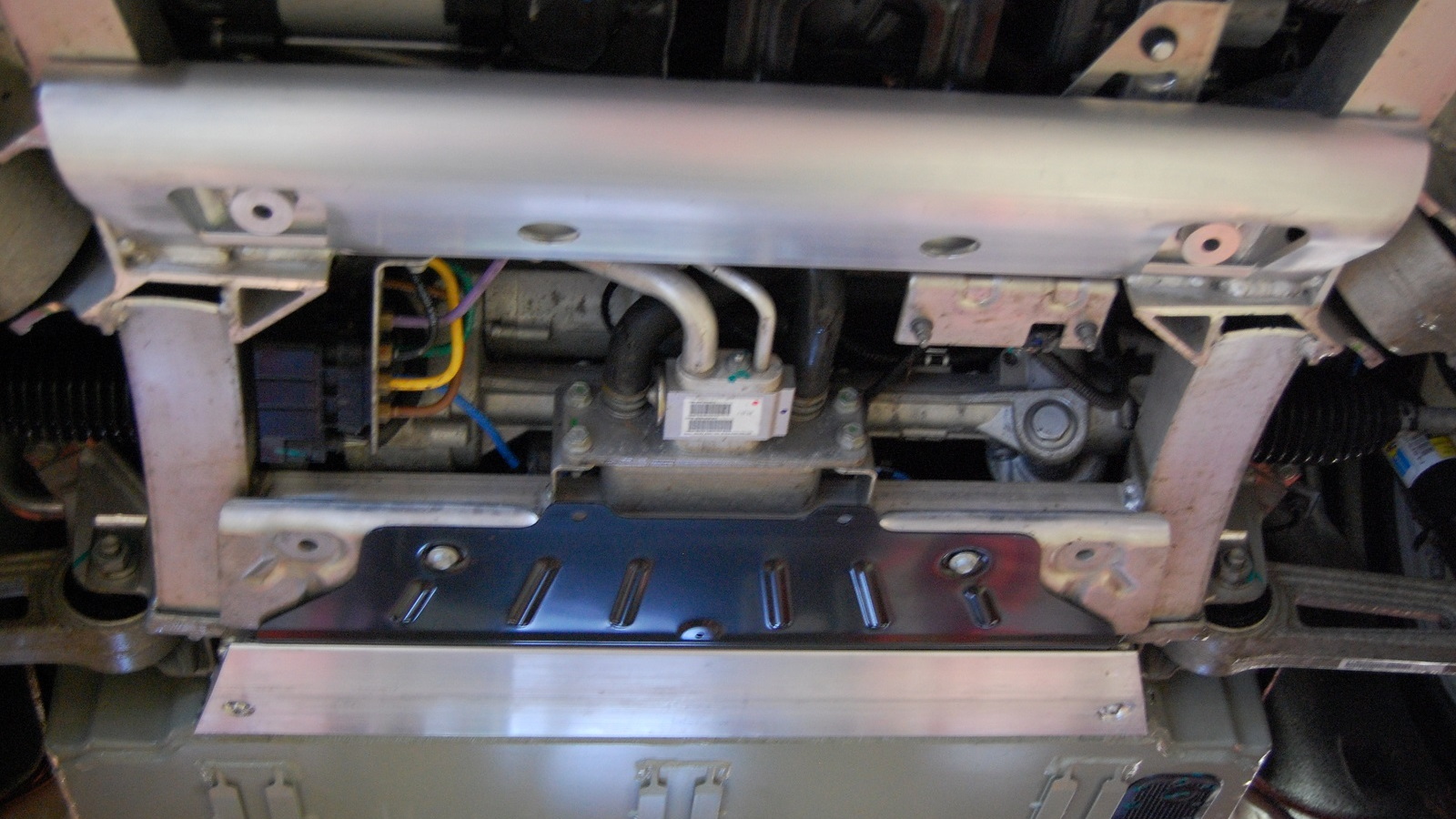 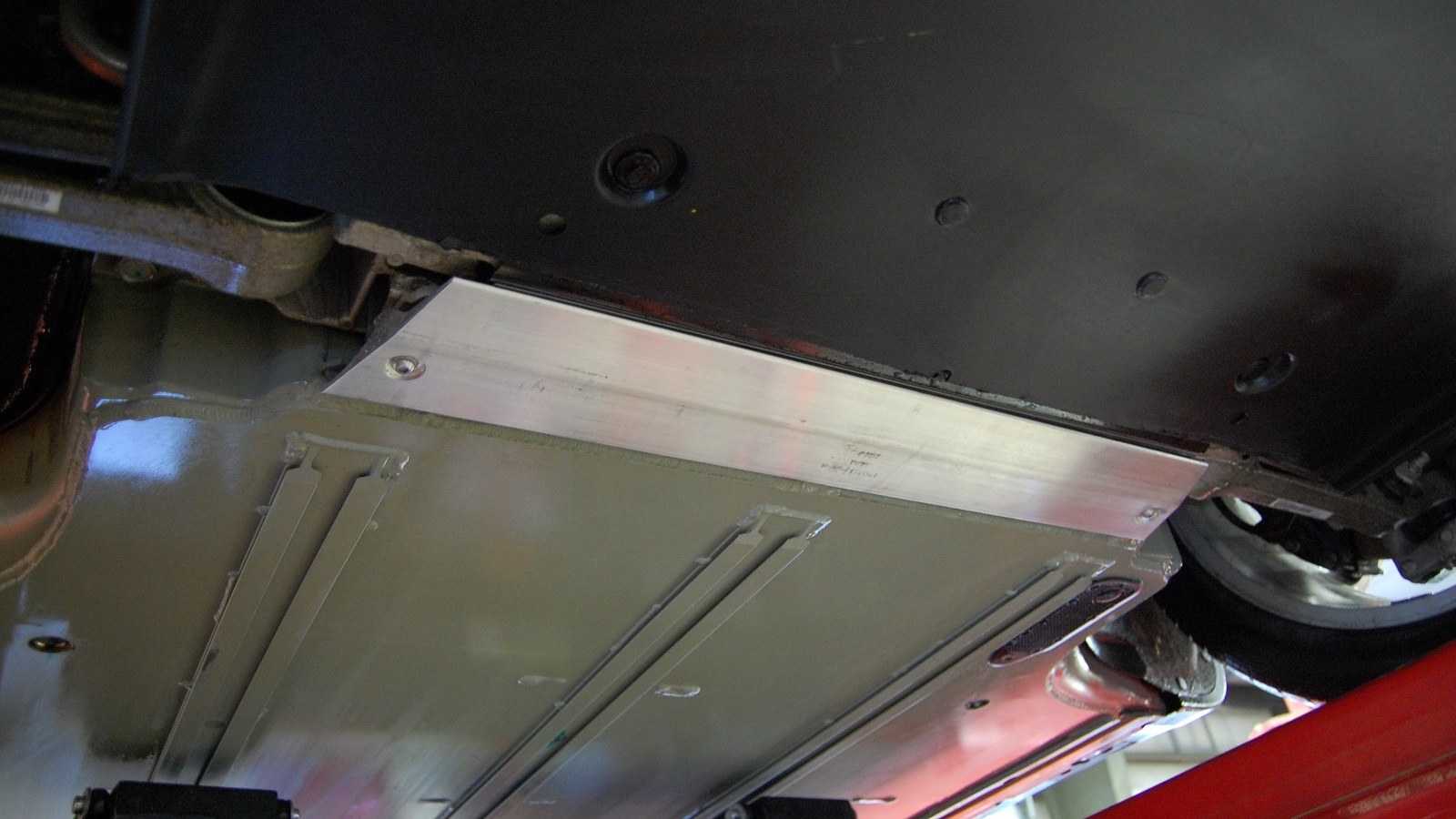 When I first heard last week that Tesla was offering Model S owners a free retrofit that would install its new underbody shield and deflector plates, I called my local Tesla Motors service center almost immediately.

It seemed like a no-brainer. The titanium shield and two aluminum deflector plates were free, weighed only a few pounds, and had no effect on the aerodynamics of the car.

Designed to deflect road debris away from the lithium-ion battery pack under the floor, the new underbody armor would presumably reduce the risk of battery penetration  and subsequent fire, as occurred in two highly-publicized incidents involving the Model S.

I figured there would be a mad scramble among Model S owners to get the retrofit, and I wanted to get in line as soon as I could. As it turned out, my haste was entirely unnecessary.

We settled on the following Thursday; at  noon on the appointed day, two Tesla techs appeared at the house and whisked my car away.

The next morning it was delivered back to my driveway, newly armored underneath. It had been nicely detailed inside and out, updated with firmware version 5.9, sporting a new charge-port light ring, and topped-off with windshield washer fluid.

No charge, of course.

A quick peek under the car revealed that only one of the three armor pieces, an extruded aluminum T-section at the front edge of the battery pack, was visible. The other two were apparently hidden above the black plastic underbody cover fitted just ahead of the battery.

Curious, I arranged for a local shop, Advanced Automotive in New Windsor, New York, to put the car up on a lift and carefully remove the plastic underbody cover. I wanted to have a look-see and take some photos.

The front-most of the three shields, a beefy aluminum half-tube about two inches in diameter, stretched across the bottom  of the car from side to side. It's designed to crush or deflect most road objects.

If that debris happens to be a high-strength self-stabilizing object--like the three-ball tow hitch that triggered one of the fire incidents--the front deflector is designed to absorb impact energy and deflect the object harmlessly upward through the floor of the front trunk area.

Just behind the aluminum half-tube is a small black titanium plate set at a slight downward angle.  It's positioned just below and in front of the front battery module, which projects forward from the front edge of the battery pack.

Just behind the titanium plate is the lateral T-section, which covers the joint between the bottom front edge of the battery pack and the front plastic underbody cover. It's designed to allow the car to ride up and over any object that makes it past the first two shields.

To my untrained eye, the three pieces looked to be well-designed and built to do their intended job. They certainly can't hurt.

Before the armor shield, I had no particular worries about road debris. Now I'm even more confident in the car's safety--though I don't intend to seek out hard objects on the road to deflect and crush.

And I'll feel a little better about using one of the new features of firmware release 5.9:  the option to set the air suspension to Low at any speed.

The air-suspension versions of the Model S were originally set by the factory to lower themselves closer to the road, automatically, above 60 mph to improve aerodynamics by reducing underbody turbulence.  After the two fire incidents, however, this feature was disabled for safety reasons.

Now that the NHTSA has closed its safety investigation and the armor shield retrofit is available, Tesla has restored the Low suspension option. And the company added a new feature too: the driver may now specify the speed at which the suspension lowers, setting it anywhere from 0 to 100 mph.

Low-rider types may rejoice at the "Always" option, but I'll stick with the original factory setting: 60 mph.

With 5.9, the "High" suspension setting can now be used up to about 35 mph (previously, it reverted to "Normal" at around 15 mph).

Likewise, the "Very High" setting is now good up to about 22 mph. Previously, it kicked down to "High" at around 5 mph.

Other notable features of 5.9 include:

My quick first impression is that the new range numbers are wildly optimistic, totaling as much as 30 to 40 miles more than the previous numbers. They seems especially off-base when the battery gets low.

Previously,  the green bar on my state-of-charge indicator would turn yellow at what I'd estimate to be a 10-to-12-percent level, with the range number typically reading about 30 miles. On a recent trip after 5.9 was installed,  the bar changed color at the same low state of charge--but the range was reading a ludicrous 60 miles.

As welcome as the 5.9 tweaks are, I'm still awaiting the reportedly major improvements of the upcoming 6.0.

A final stake through the Vampire's heart? An accelerator cut-off when the brakes are applied? Rear-view camera back-up guidelines? An actual state-of-charge percentage number?