Last year, the 96,000 plug-in electric cars sold in the U.S. represented a bit more than half a percent of the total market of 16.5 million vehicles.

Market share is a good statistic: It's useful, and easy to track. But we need to piece together the relationships between vehicle price, type, and market share, to gain a fuller sense of the electric-car landscape.

W. Edwards Deming--the late American statistician revered in Japan for his philosophies about product quality--famously said, "There is no substitute for knowledge".

So, how did plug-in electric vehicles do compared to similarly priced vehicles?

Light trucks (crossovers, SUVs, and pickups) make up almost half the U.S. market, but the sole electric vehicle in those categories is the Toyota RAV4 EV – a low-volume compliance vehicle. So is it reasonable to include truck and SUV sales in the calculations? 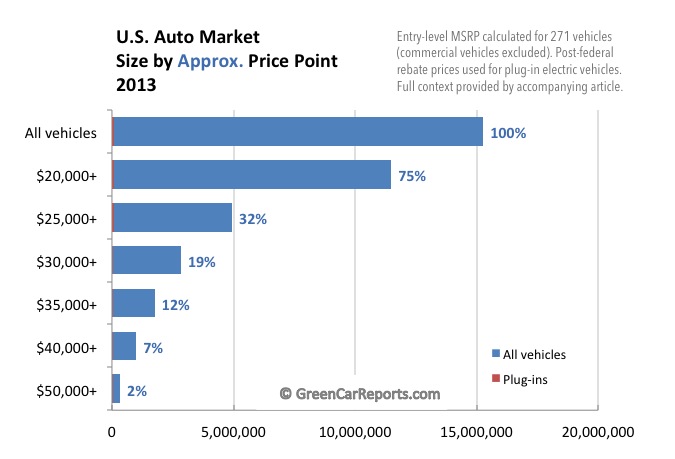 Sales figures for all vehicles sold in the United States in 2013 can be obtained in many places; we used GoodCarBadCar.net (which kindly credits GreenCarReports in its Canadian Tesla sales reports).

That data covered about 98 percent of reported U.S. auto sales, good enough for our purposes. The balance consists of commercial vehicles like delivery vans. We estimated Tesla's American sales based on its quarterly shareholder letters, and estimated sales abroad.

Looking up the entry-level sticker price for each of the 271 models listed, we used that as a proxy for each one's average selling price. It's a necessary simplification: automakers don't break down their sales by trim level publicly.

Sales of deluxe models may push a vehicle's average transaction price higher, but dealer and manufacturer discounts have some counterbalancing effect--so the entry-level MSRP was a good first approximation.

For electric vehicles, we added two steps. Since prices on several plug-ins were cut during the year (thank you, experience curve effects!), we used the average of the starting and ending MSRPs. Then we subtracted the Federal income-tax credit for each vehicle, to reflect the price most buyers would have actually paid.

Keeping in mind that our calculated selling prices were rough estimates, we can see that about two-thirds of the U.S. market is made up of cars costing less than $25,000. 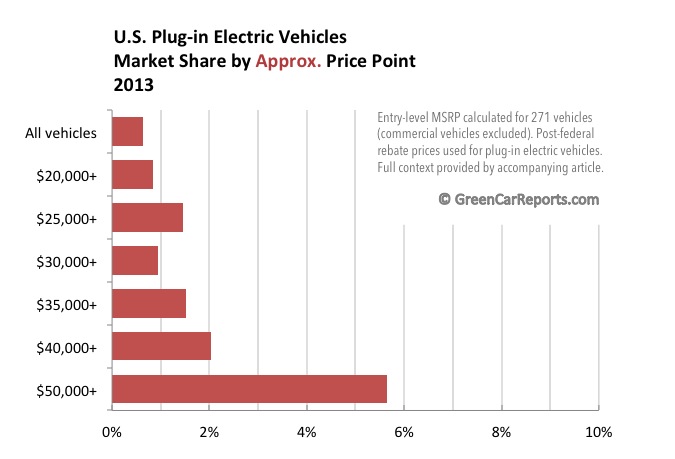 These calculations were roughly consistent with findings from Navigant's recent consumer survey, which showed that 71 percent of new-car buyers don't want to spend more than $25,000 on their next vehicle.

(Our figures diverged from theirs at the low end of the market, perhaps reflecting the difference between what people want to spend and what they actually end up paying.)

And this data puts last year's Volt price cut in perspective: Going from $40,000 to $35,000 roughly doubles the potential buyer pool, from 6 to 11 percent of the market. The effect of Federal incentives pushes the Volt down to the high $20,000s--a bigger market yet--but very few consumers are aware of them.)

Most interesting, at $21,300 after the tax credit, the Nissan Leaf is now priced to cover three-quarters of U.S. car-buyers. This year the company may double its Leaf production and sales volumes.

The price-point chart also hints at the effect that eliminating the Federal incentives could have on plug-in electric sales.

In the United States, each price drop of $5,000 roughly doubles the buyer pool; conversely, a $5,000 price increase halves the number of people who can buy the car.

The real world may bring less dramatic effects, since 95 percent of American car buyers don't know about the various incentives for electric-car ownership in the first place.

Consumer awareness of the cost-of-ownership advantages of electric cars (see "The ROI Lie") can only increase over time, helping buyers to see past that bottom-line sticker price.

Under our crude methods, we calculated that electric vehicles had about 1.4 percent market share at the all-important $25,000 price point--including the Volt and its healthy sales.

This would seem to be a more representative measure of electric cars' market success than the more widely reported 0.6 percent of the overall market. Why compare plug-ins to vehicle price segments (under $20,000) where there are no electric competitors?

Then there's the issue of vehicle types--specifically, the pickups and SUVs that make up almost half the U.S. market. As noted earlier, the only plug-in there is the low-volume Toyota RAV4 EV compliance vehicle. 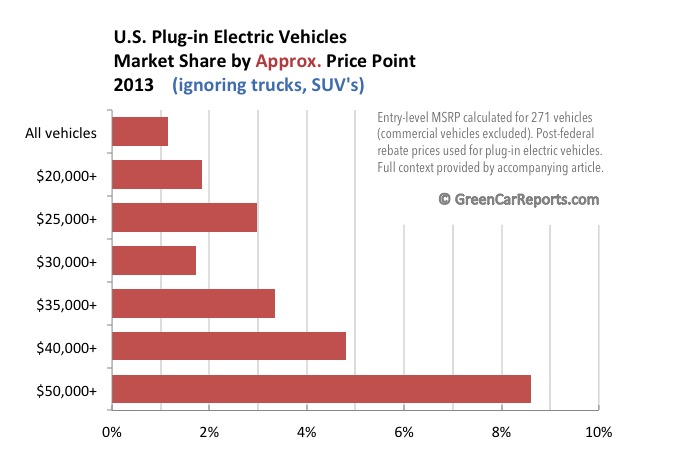 Dividing the U.S. auto market by price point, and then backing out trucks and crossovers/SUVs (as well as the minimal 1,096 RAV4 EV sales), gives us the best context for analyzing the sales of electric cars.

Within that competitive set, we see that plug-ins capture:

(That makes for a pretty handy mnemonic device--at least for last year's numbers.)

So the next time someone asks you about electric vehicle sales, you may wish to offer up the "1-2-3s" of the data.

Then, of course, you can go on to explain how battery improvements and corporate commitment (from Nissan, GM, and BMW, in any case) mean those numbers will rise steadily over the coming years.

At the top of the market, by the way--cars $50,000 and up--the startup Tesla Motors has won more than 8 percent of luxury passenger-car sales in the United States, in its first full year.

If we calculate an estimate for the company's market share among passenger cars with a base price of $62,400 or more (the lowest Model S price after the Federal tax credit), the result soars to 17 percent!

It may take a frustratingly long time for electric vehicles to achieve substantial market share at the lowest price points in the U.S. market.

But compared to hybrids--with Toyota the only carmaker after 15 years to commit fully to hybrid technology across all vehicle lines--many auto companies are already embracing the plug-in path, with varying degrees of commitment.

Continuing improvements in battery technology, and those commitments, suggest that electricity is indeed the future we're driving towards.