But the Ambassador--fondly known as the "Amby"--is both India's de facto taxi cab and the oldest production car in the world.

Now it's been fitted with a new, cleaner diesel engine to allow it to resume taxi service in Kolkata and 16 other Indian cities that tightened emissions rules as early as April 2010 to eliminate the oldest, dirtiest diesels from their roads.

As reported on Indian Autos Blog, Hindustan Motors announced on Thursday that the Automotive Research Association of India (ARAI) had certified its Ambassador with a new 1.5-liter turbodiesel engine as "BS-IV compliant"--equivalent to the "Euro 4" limits used from 2005 to 2009 in Europe.

That means the latest diesel Amby has more up-to-date emissions systems, along with such modern accoutrements as an OBD-II diagnostic plug (fitted to U.S. cars since 1996). It emits significantly fewer particulates and other undesirable byproducts of standard diesel engines without aftertreatment.

That specification is still far from the current "Tier 2, Bin V" emissions standards required of modern clean-diesel cars sold in the U.S.--but it's absolutely a step up from the minimal emission controls of India's earlier BS-III standard. 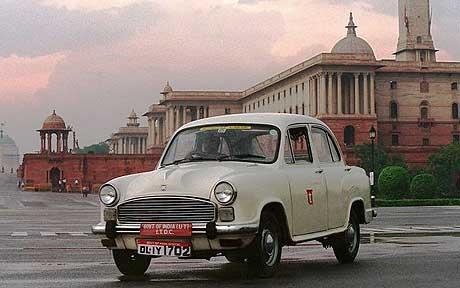 According to a Hindustan press release, Kolkata taxi drivers who tested the revised car reported that it offered better power and torque, handled hills better, and was overall more drivable--while maintaining the same fuel efficiency as the older model.

The Ambassador is no longer a centerpiece of the Indian car market, but it continues to be offered with a wide array of engines: 1.5- and 2.0-liter diesels, a 1.8-liter gasoline engine, and both compressed natural gas (CNG) and liquified petroleum gas (LPG) variants.

Its position is roughly analogous to the Ford Crown Victoria, a simple and robust vehicle that received only minimal upgrades over its decades-long life and was largely built for taxi service at the end.

The Amby gets its "world's oldest production car" title because it continues to use a body that was original launched in the U.K. in 1956 as the Series III Morris Oxford.

(It's debatable whether the Morgan Plus 4, which dates back to the 1930s, might take that title instead--but no dimension of today's Plus 4 is shared with the original Thirties model, so we're giving it to the Amby.)

The mid-Fifties Oxford was a sensible mid-size car produced by what was then Britain's largest carmaker, the British Motor Company (BMC).

It was better known in the U.S. for its Austin-Healey and MG sports cars, and later the revolutionary front-wheel-drive economy car dubbed the Mini.

Even before the Series III and IV Oxford were replaced for the 1959 model year, tooling to build the Oxford Series III was shipped to Hindustan in India--and the resulting Ambassador has stayed in production for more than half a century.

It has had a large variety of engines fitted, with the British originals supplanted by Japanese four-cylinder upgrades from Isuzu. In 1979, India's very first diesel passenger car was added to the range as well.

The latest Hindustan Ambassador with the updated BS-IV diesel will go into production at Hindustan's Uttarpara plant in Hooghly, West Bengal, next month.