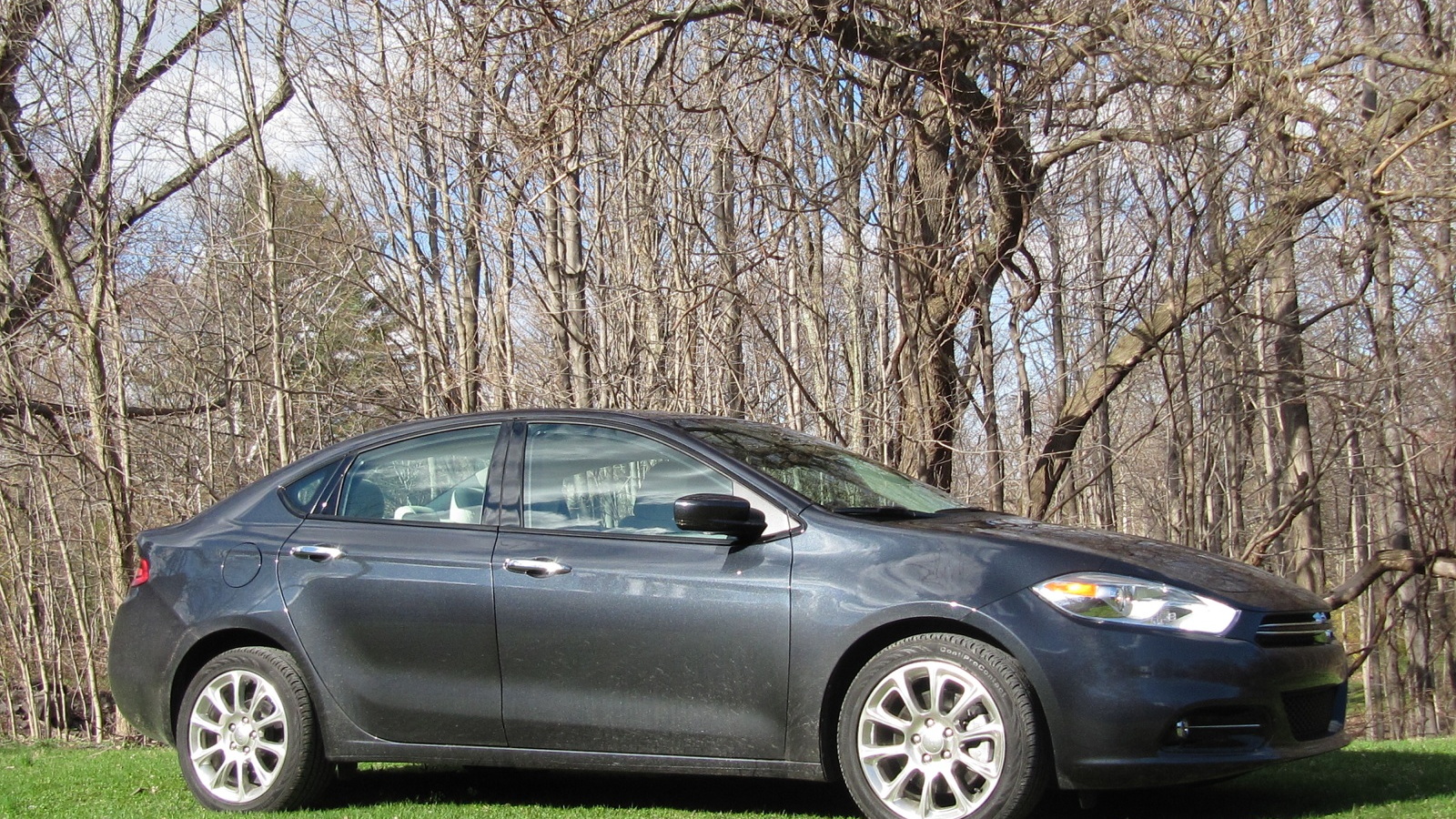 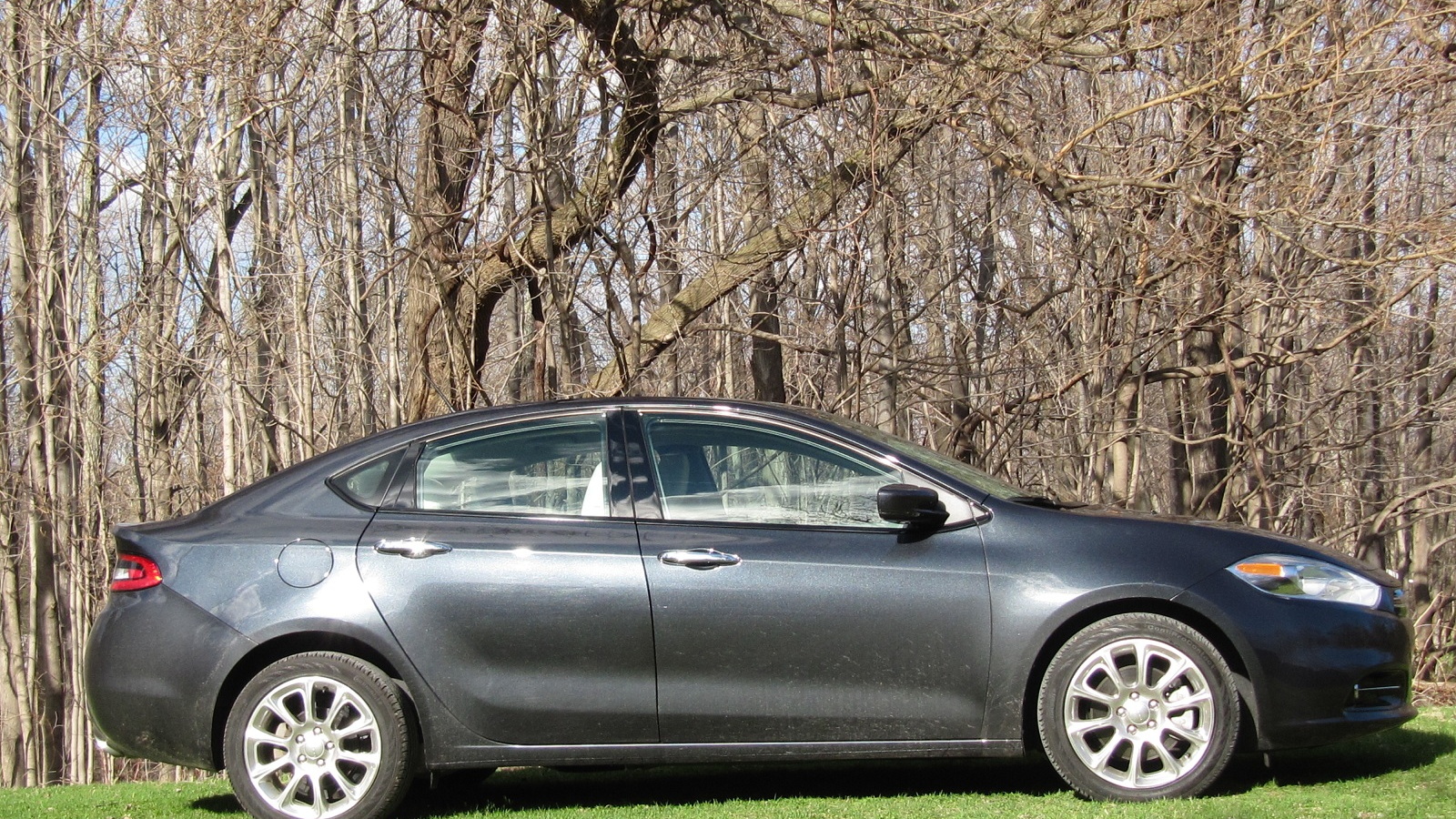 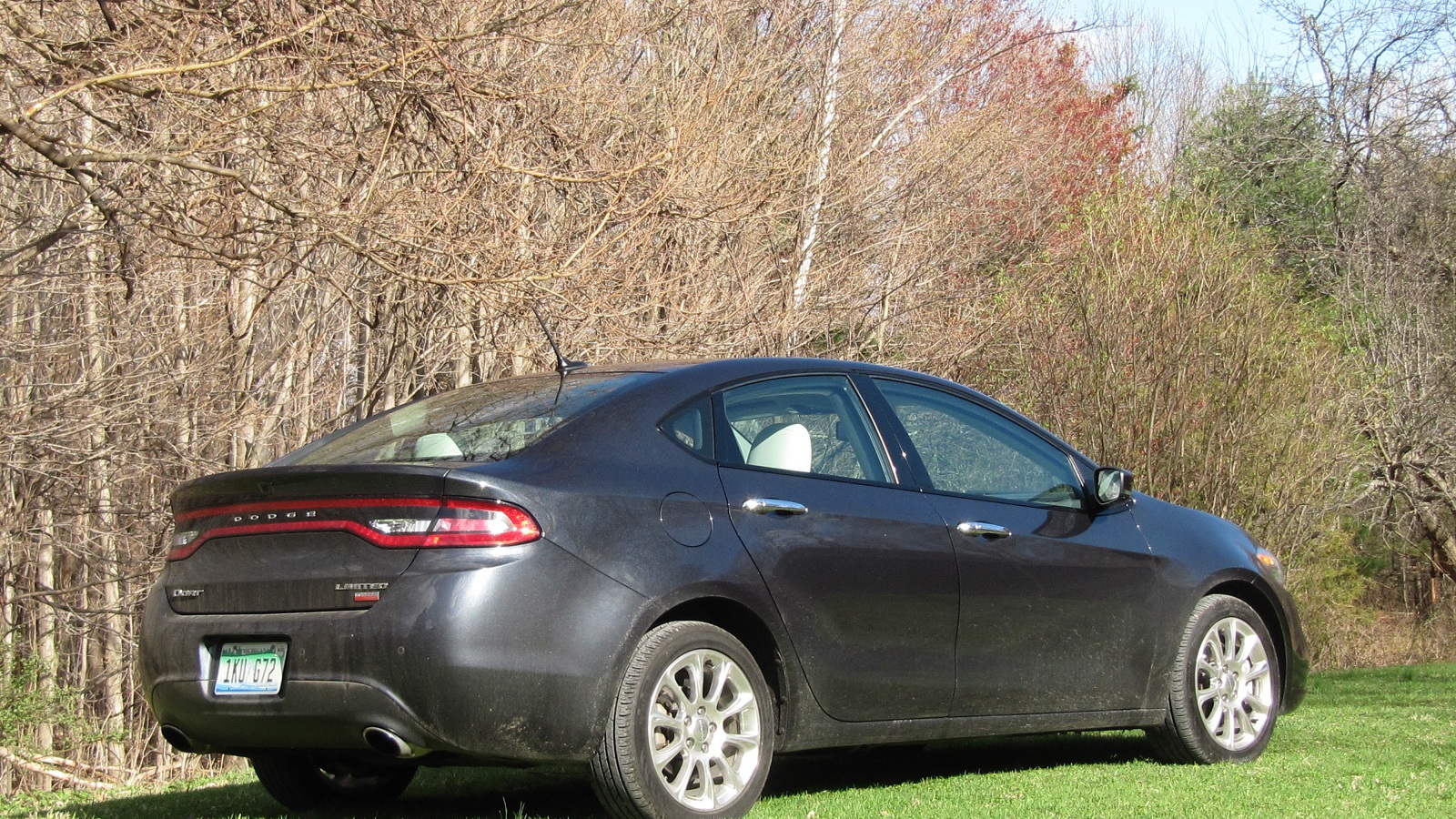 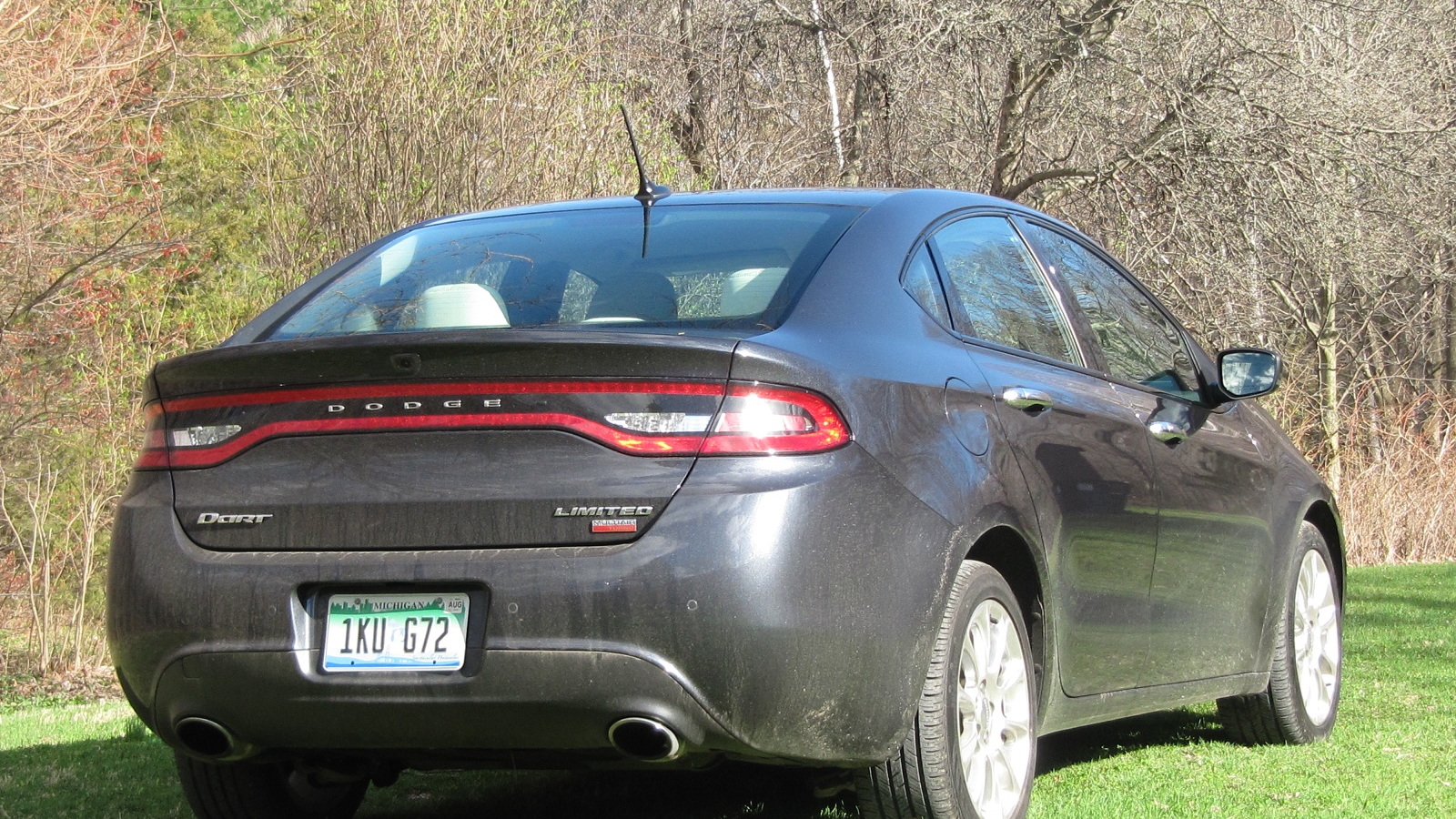 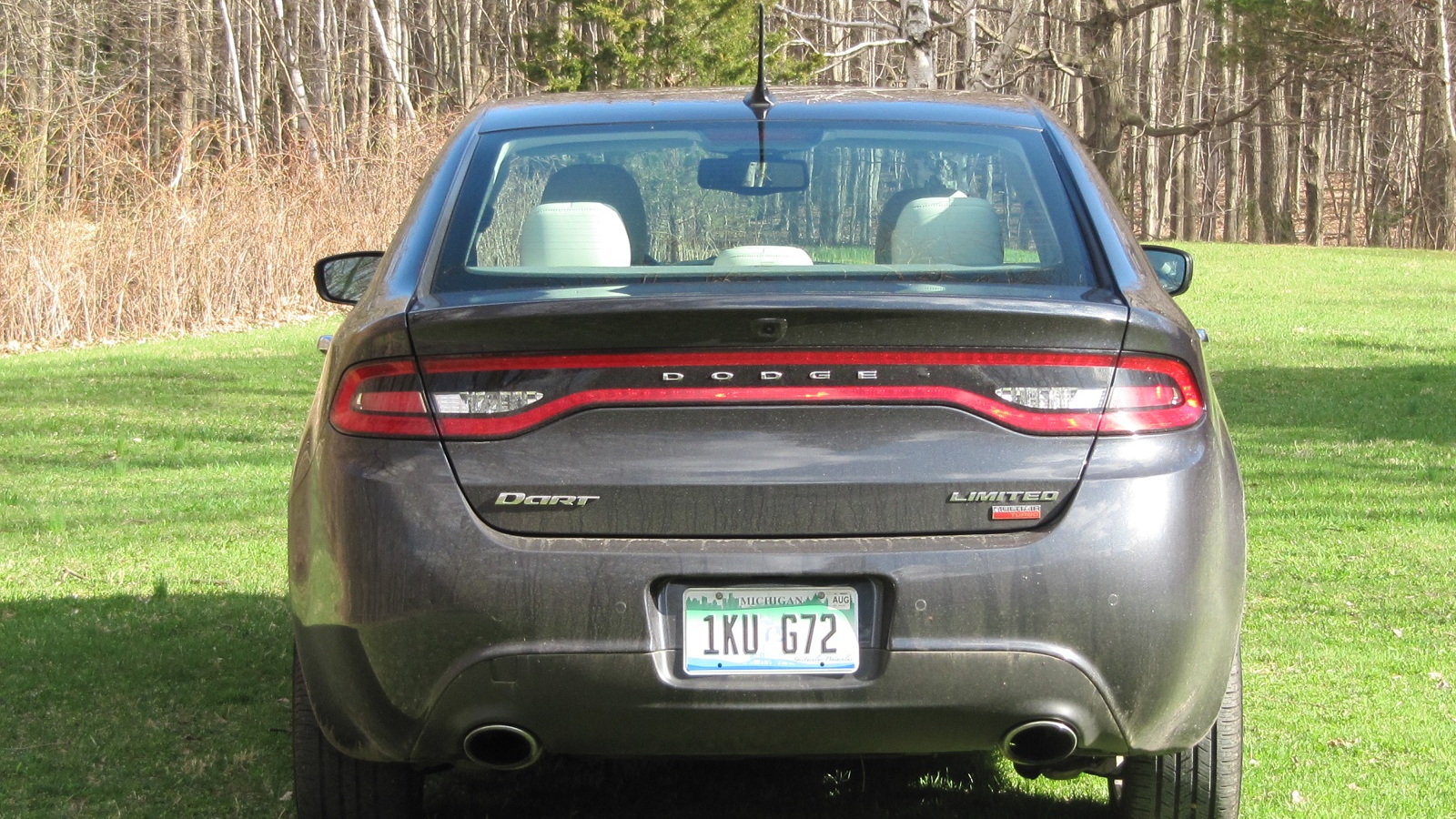 The 2013 Dodge Dart has gotten off to a slow start in the market, but it's a vitally important car for Chrysler.

The first vehicle based on shared underpinnings from its parent Fiat, the Dart has to show Chrysler can build competitive cars--and, even more important, top-quality small cars that compete in the heart of the market: the compact four-door sedan segment.

Based on a weekend test drive, the first Dart we'd driven since the launch event last summer, we'd say that the Dart is a huge step up from the unloved Dodge Caliber hatchback it replaced.

But it's not yet among the best in the segment for driving quality, interior refinement, or performance.

On fuel efficiency, though, we were somewhat impressed.

Our car came with the smallest engine, a turbocharged 1.4-liter engine from Fiat that produces 160 horsepower and 184 lb-ft of torque. To get all that power, however, you'd better like to rev it--at which point it gets considerably noisier.

It's worth noting that the same engine paired with a six-speed manual gearbox is not only $1,100 cheaper, but gets slightly better ratings at 32 mpg combined (27 mpg city, 39 mpg highway). There's also a Dart Aero version with a highway rating of 41 mpg.

That makes the Dart one of the few cars to exceed its combined rating on our test by more than 1 mpg, a notable (if minor) achievement.

The Dodge Dart is spacious for the category it competes in: It's actually deemed a mid-size sedan by the EPA, based on its interior volume, though it's more likely to be viewed and sold in the compact segment.

That puts it up against stalwarts like the Toyota Corolla, Honda Civic, and Ford Focus. Other competitors include the Chevy Cruze, Hyundai Elantra, Volkswagen Golf, Subaru Impreza, and Mazda 3.

Our high-end Dart had rich-looking cream and grey two-tone upholstery, with black accents. A nice and unexpected detail was a pair of stitching lines in yellow and white thread across the top of the dashboard.

The seats were comfortable over our highway cruising miles, and we liked the usefulness of the bin hidden under the seat cushion of the front passenger seat. No, you can't use it with another person in the seat, but when driving solo, it's a large and useful storage space.

The dash and interior plastics were mostly soft-touch--that's included in the Dart Limited model we drove, but not on all trim levels--but their shapes were simple, rounded, and somewhat plain.

Considering the appalling, cheap Chrysler interiors that were standard just a few years ago, they're a great step up. We still think Ford and Hyundai have nicer dashboard designs, however.

We also liked the graphics in Chrysler's display. While they're not as elegant looking as some other makers'--Ford, in particular--they're very easy to read and comprehend.

One thing that let down the Dart was its switchgear, some of which was inferior to competitors. Two examples:

These are things Chrysler could fix--and drivers will get used to them--but after driving more than a dozen cars this year alone, they stand out as substandard.

But the biggest drawback to our Dart was its six-speed dual-clutch automatic transmission.

This is effectively a manual transmission that shifts itself, freeing the driver of that responsibility but providing better fuel efficiency than a traditional torque-converter automatic.

On our first Dart drive last June, Dodge provided only cars with manual transmissions. The automatics arrived later. Now we know why.

The dual-clutch automatic does not feel similar enough to a conventional automatic that drivers can forget it's there.

The transmission hesitates for a moment under power, and then engages to provide quick takeoff. Under continuous heavy acceleration, it shifts fast and smoothly through the gears.

But under light loads, in stop-and-go driving, and especially on multiple fast power on/off transitions, it's tentative and it surges and occasionally bucks in a very unusual way.

That's partly because to simulate idle creep, it has to slip its clutch to let the car move slowly forward--and getting the degree of slip right is tough.

Over four days, we found we got somewhat more used to its behavior. And since nine out of 10 Americans buy automatics in their vehicles, we expect it will be the dominant transmission in Darts with the most fuel-efficient engine.

But we think Chrysler needs to continue tuning and refining its control software.

And ultimately, if that doesn't work, the company should probably replace it with the nine-speed automatic transmission that will debut on the 2014 Jeep Cherokee crossover.

Right now, the dual-clutch automatic will likely pose a drawback for drivers coming from cars with conventional automatics who take the Dart for a test drive.

We'd urge them to try the six-speed manual. It makes the car a lot more fun, not to mention the slightly better gas-mileage ratings.

For more information on the complete Dart range, including options, prices, gas-mileage ratings, and specifications, see this full review of the 2013 Dodge Dart.

Our 2013 Dodge Dart Limited carried a base price of $19,995, which includes equipment that may be optional on other compacts.

Standard features on the Dart Limited include a backup camera, keyless entry, active grille shutters for better fuel economy, a six-way power driver's seat with four-way power lumbar adjustment, the neat in-seat storage bin under the front passenger seat, and the 8.4-inch touchscreen display in the center of the dash.

There's also a 7-inch display screen in the cluster between the two main gauges, which shows various operating data that the driver can configure. The rear-view mirror auto-dims, and the car includes a pair of 12-Volt auxiliary power outlets and integrated iPod control.

On top of that list, our car had been fitted with what's called Customer Preferred Package 22L, which groups together various other packages that are frequently ordered.

Right off the bat, the 1.4-liter turbocharged engine costs $1,400, plus another $1,100 for the six-speed dual-clutch automatic transmission.