But the featured speaker at a luncheon thrown by the Economic Club of Chicago drew a full room: Henrik Fisker, cofounder of struggling startup automaker Fisker Automotive.

Fisker's talk was a fairly standard presentation that could largely have been given two or three years ago, when Fisker was on the verge of delivering its first Karma sedans.

When asked whether he would care to "comment on where new investors might come from," Fisker replied, "Absolutely ... not."

The pause in his response was perfectly timed, even if the answer itself made it clear he would discuss little of substance.

He did, however, take several swipes at Tesla Motors [NSDQ:TSLA] and its battery-electric Model S luxury sport sedan--without ever naming the company--in touting the benefits of his own Karma range-extended electric sedan.

"There is not a lot of demand for pure battery electric cars," he said in describing why his company chose that electric architecture, which he termed a "plug-in hybrid."

"In pure electric vehicles," he continued a few minutes later, "there will be too many models chasing too few buyers"--and he went on to make several references to the undesirability of a "giant battery" that only provides 250 miles of range, "and now you need to charge for a couple of days."

In response to a question about whether Fisker would ever build the Karma with only a gasoline engine--like the Corvette-powered Destino displayed at the Detroit Auto Show--Fisker emphatically said no.

"Our lifestyle brand is all about being environmentally friendly," he said. "Established carmakers are the best at making gasoline-powered cars, and we want to stay in a space where there's less competition." 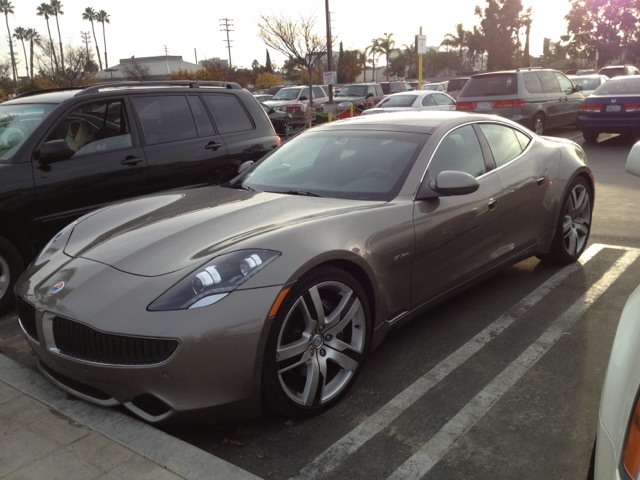 Finally, a few random quotations and factoids from Fisker's presentation:

Meanwhile, Fisker Automotive still hopes to  close a deal by the end of this month for new investment or perhaps sale.

In December, the company said it had hired a restructuring consultant, Evercore Partners, to assist it in evaluating alternatives to keep the company going. It has also brought in Huron Consulting, a specialist in cash conservation, for the interim period.

The clock is ticking.