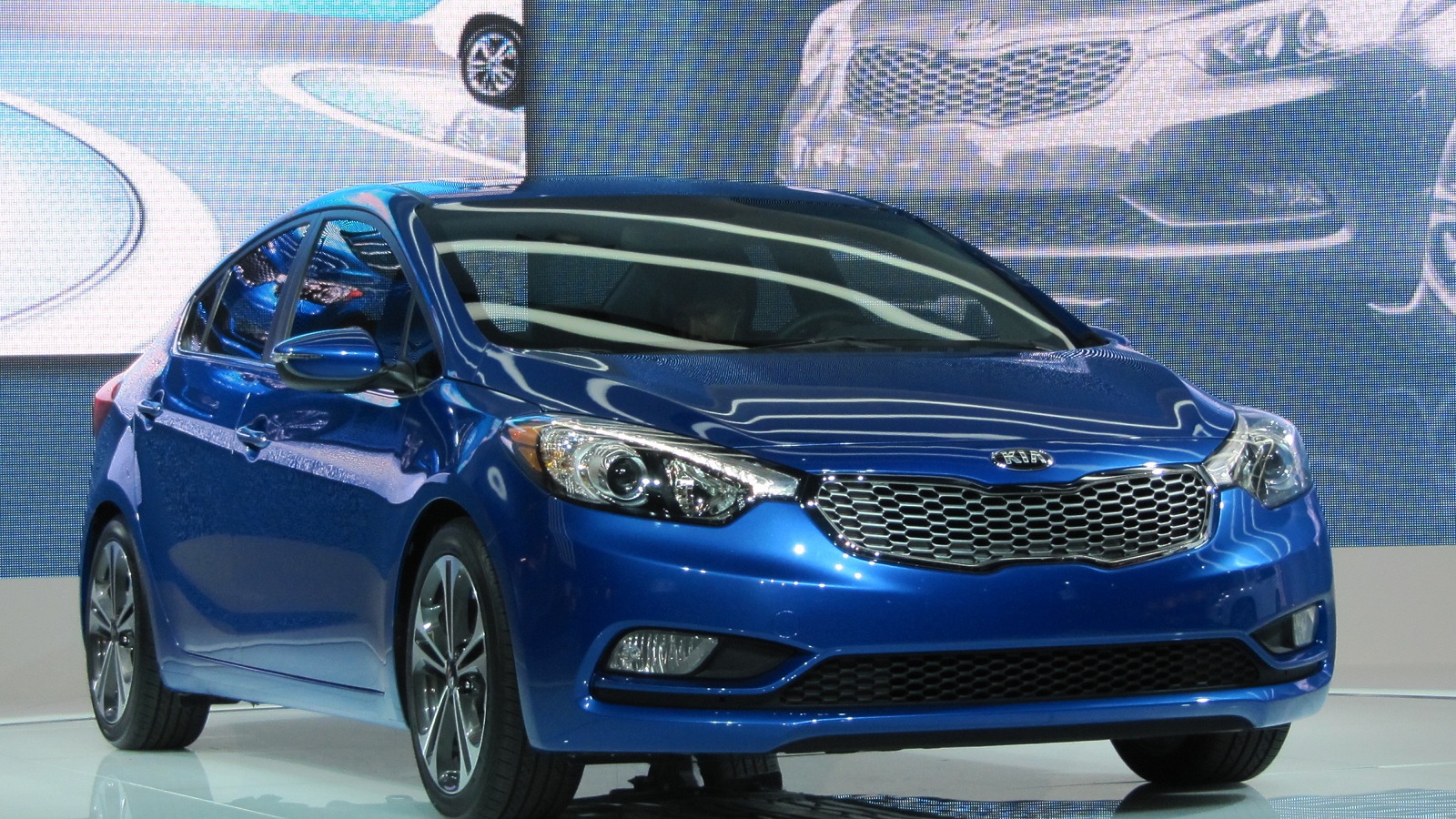 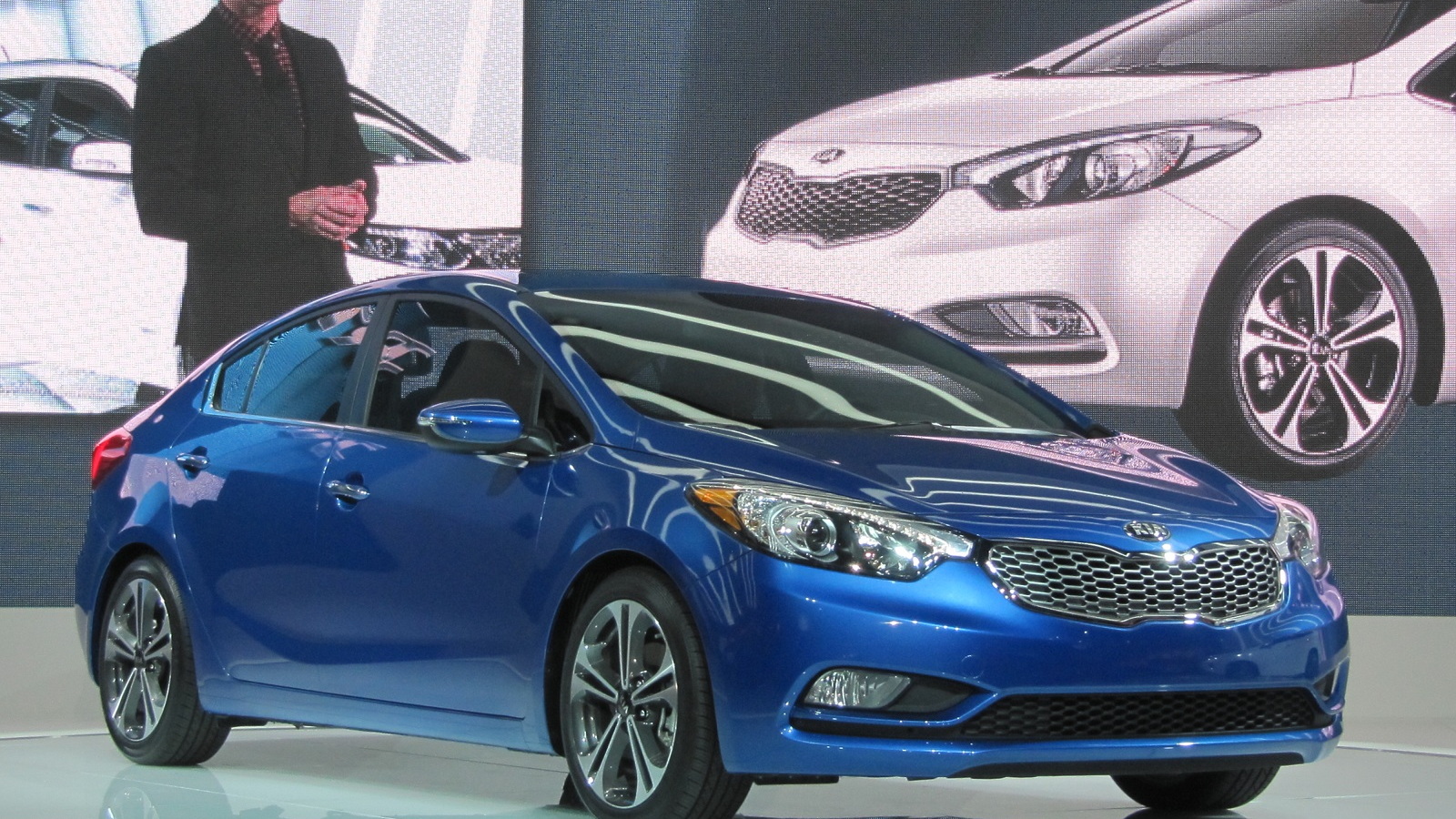 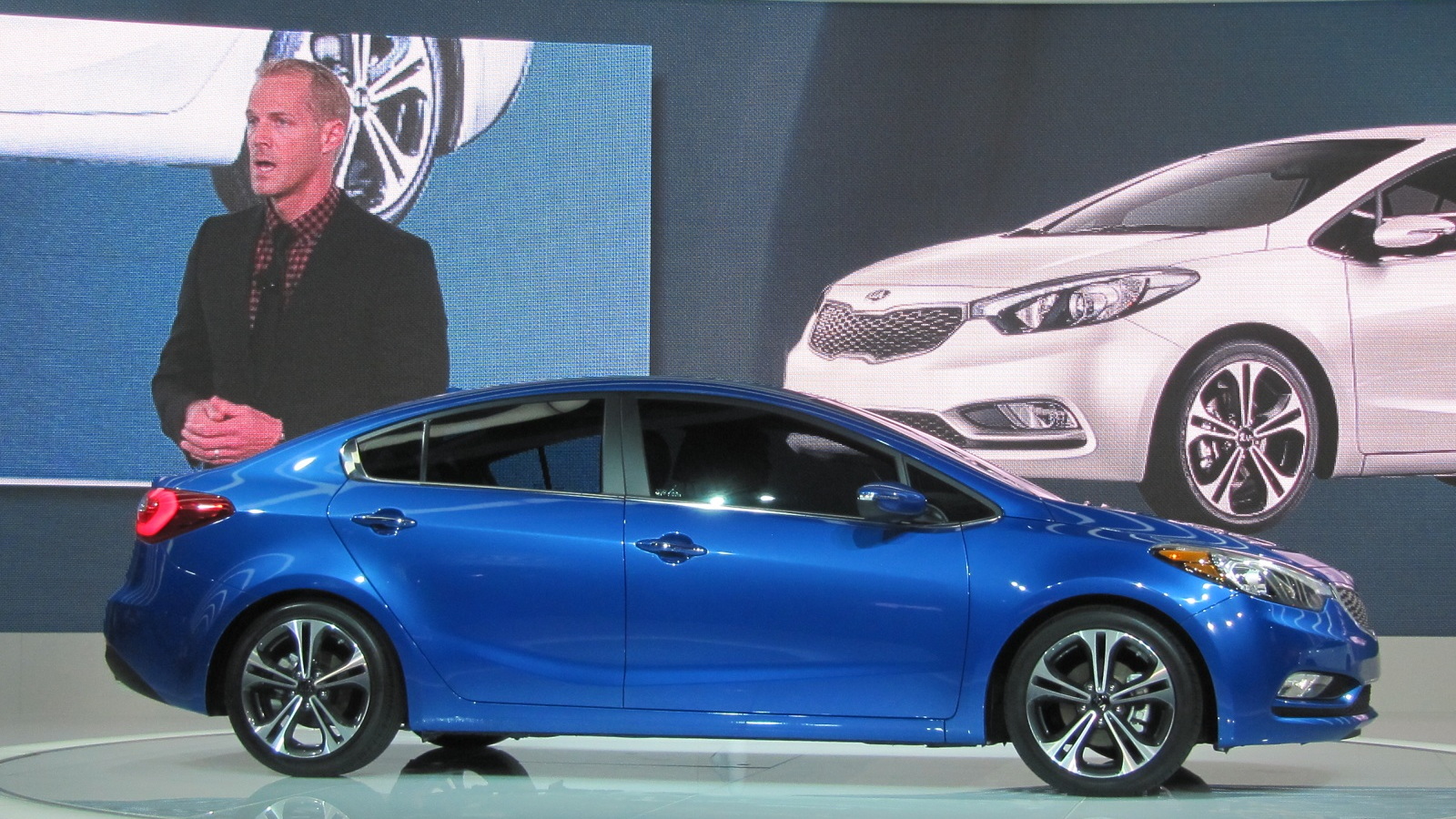 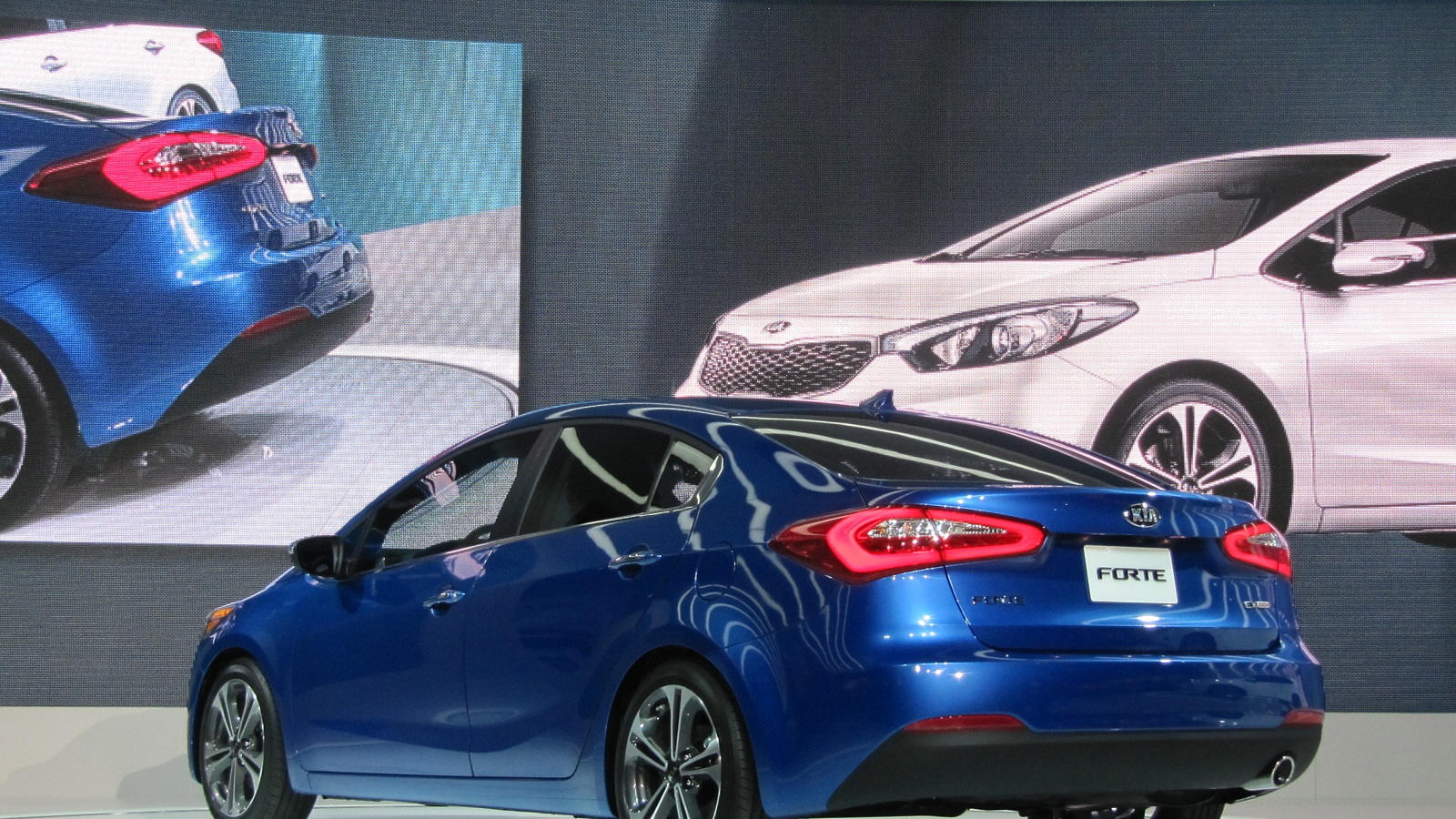 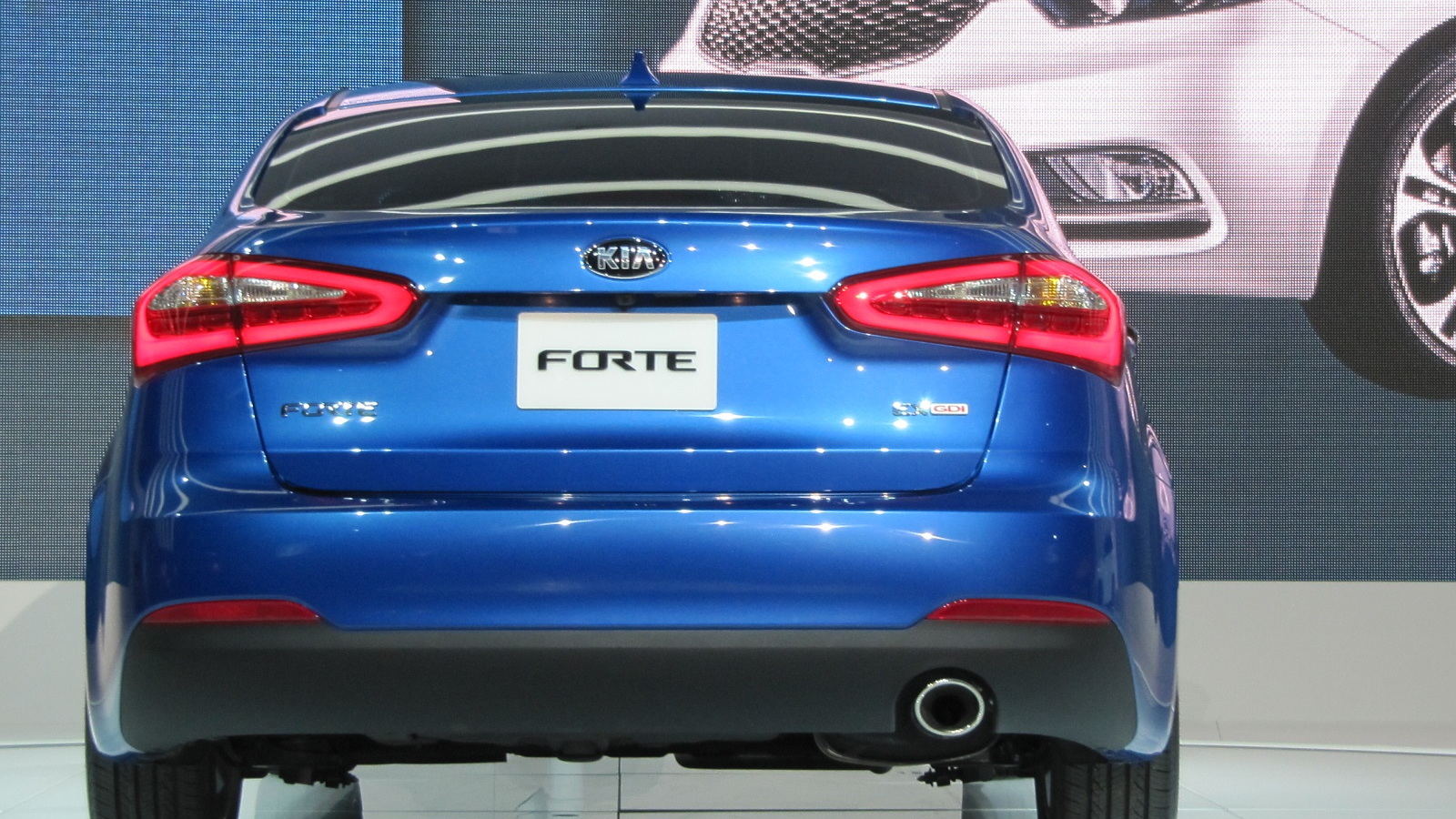 19
photos
Today at the Los Angeles Auto Show, Kia took the wraps off its new compact car, the 2014 Kia Forte.

As our live images from the show floor demonstrate, the 2014 Forte is a sleeker, more aerodynamic four-door sedan than the car it replaces--now much closer in shape to its Hyundai Elantra sibling.

With longer, lower, wider dimensions, the third-generation Forte is larger inside and will offer more features and higher performance than the current car, which was launched in 2009.

The Korean maker is offering a pair of engine options: a 148-horsepower 1.8-liter four for efficiency, and a 173-hp 2.0-liter upgrade for more power.

The smaller engine in the LX model can be ordered with a six-speed manual gearbox or Hyundai's own six-speed automatic transmission. The EX model with the larger 2.0-liter engine comes standard with the automatic.

An optional Eco Package includes Kia's ISG (Idle Stop & Go) start-stop system, which shuts off the engine when the car is stopped and restarts it automatically when the driver's foot lifts off the brake. That package also wraps in dual-zone automatic temperature control.

The new 2014 Forte rides on a wheelbase fully 2 inches longer than the outgoing model, and Kia has fitted electric power steering to improve efficiency over the previous car's hydraulic system.

An optional Flex Steer feature lets the driver select among Comfort, Normal and Sport settings, using a button on the steering wheel, which varies the steering effort required.

Wheel and tire options start at 15 inches on the base LX, with optional 16-inch alloys. The EX has the 16-inch alloys as standard, with larger 17-inch wheels as an upgrade.

Kia terms the styling "aggressive" and "muscular," and certainly the steeply raked windshield and rear window give the car a wedgier, lower shape than its predecessor.

Its "modern esthetic" styling was designed at Kia's California studio, with influences from European sport sedans in mind.

Like the current Elantra, the rear fender line kicks up and emphatic sculpted accent lines on the body draw the eye to the car's horizontal lines.