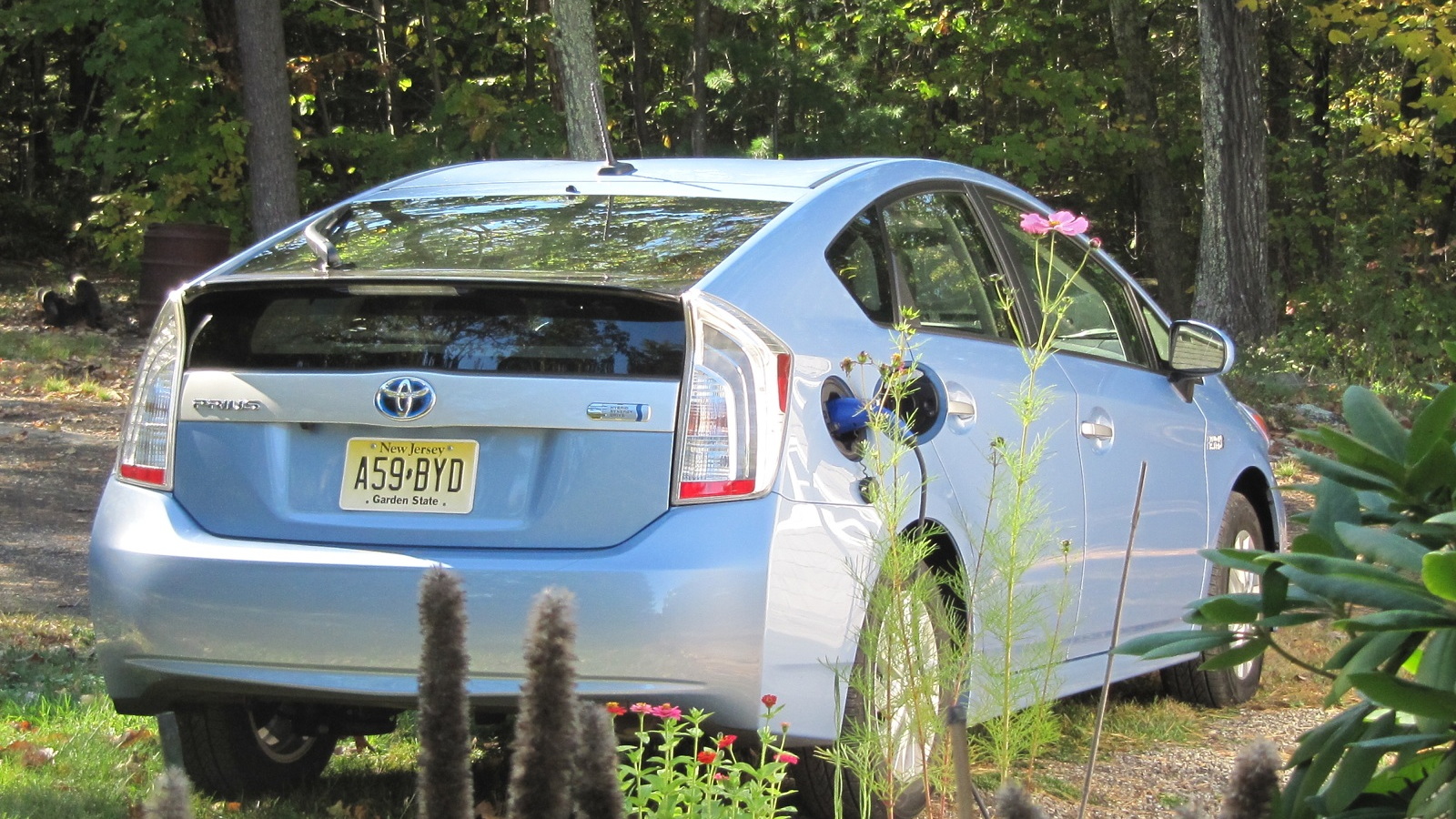 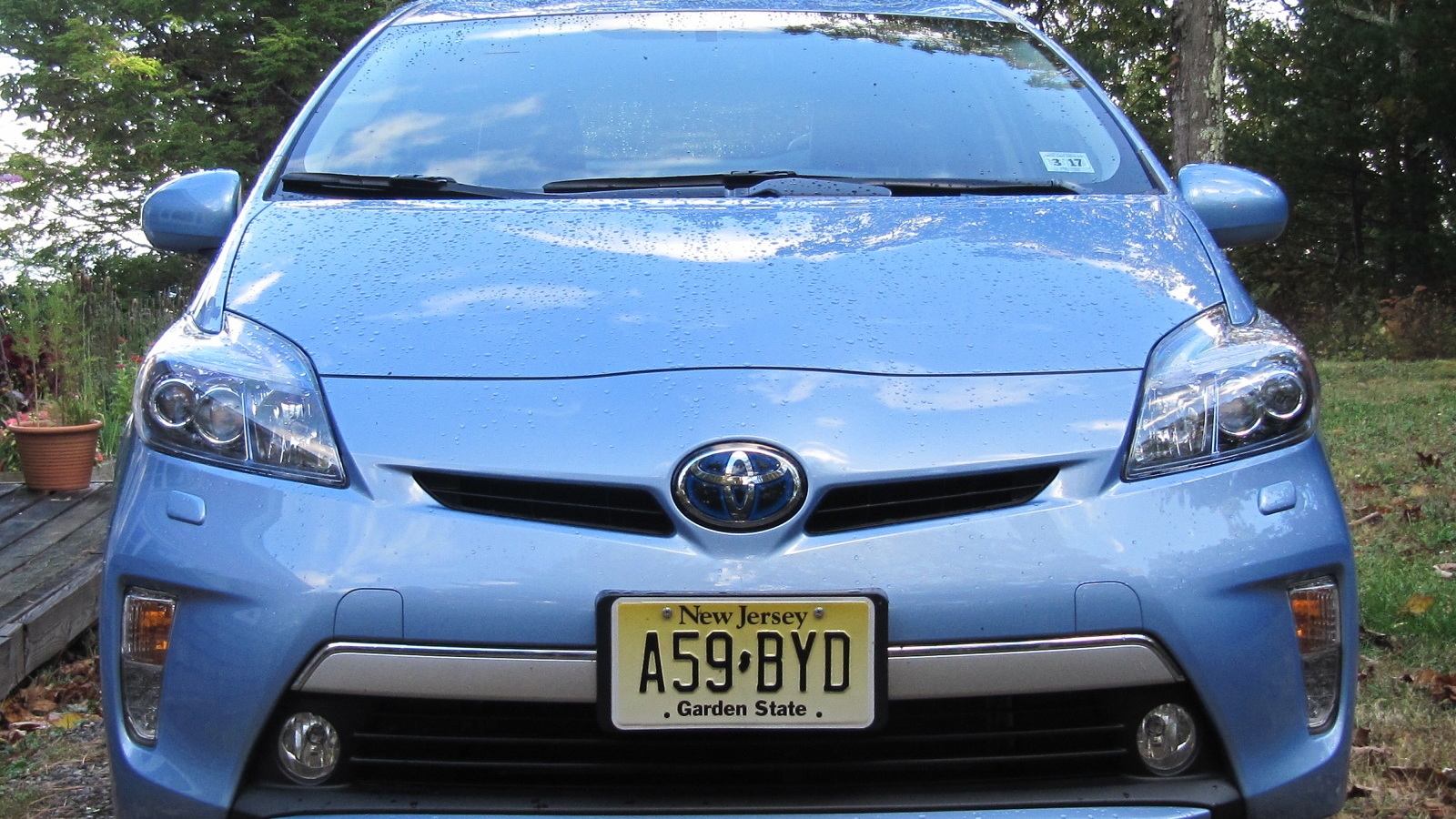 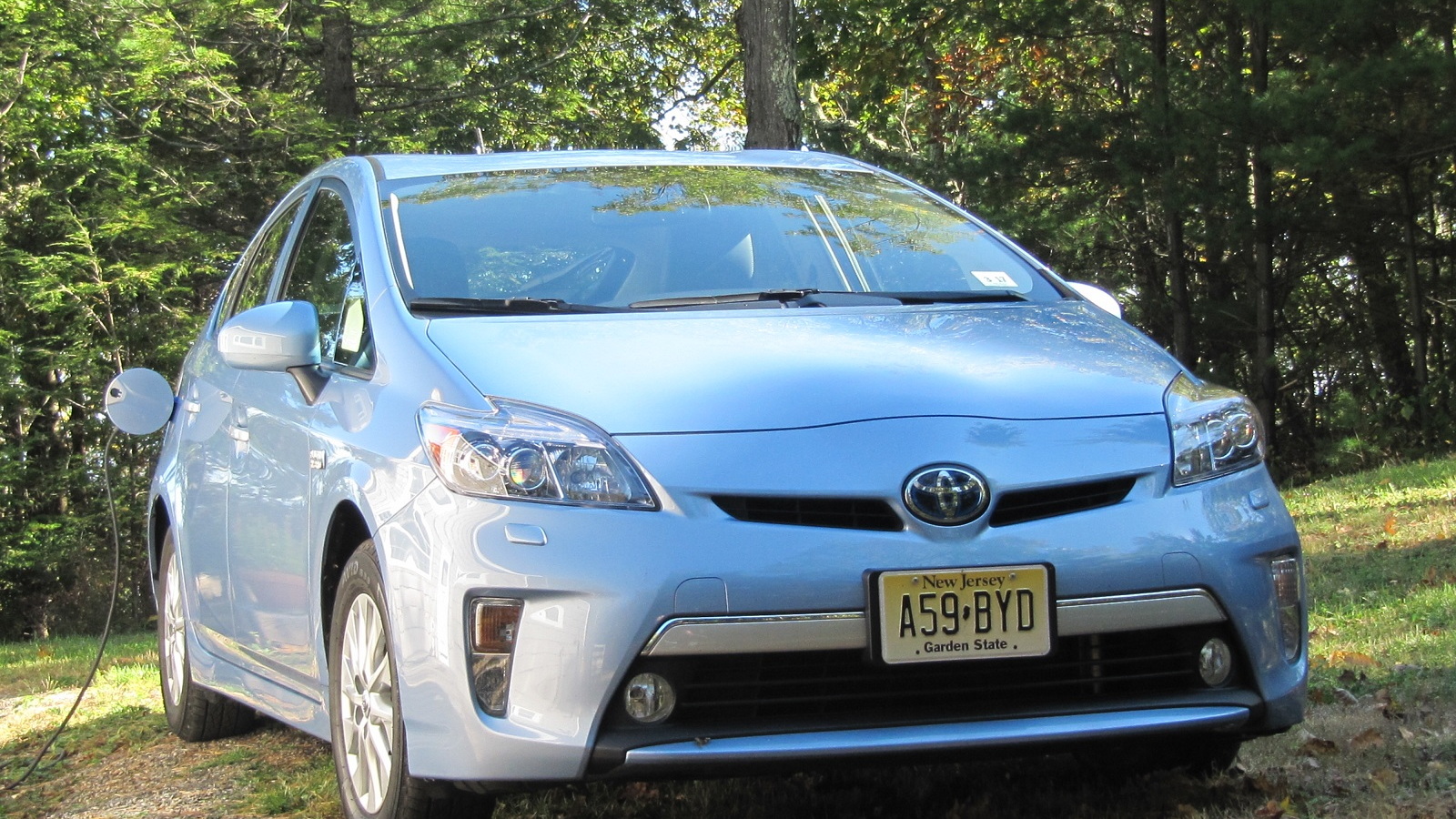 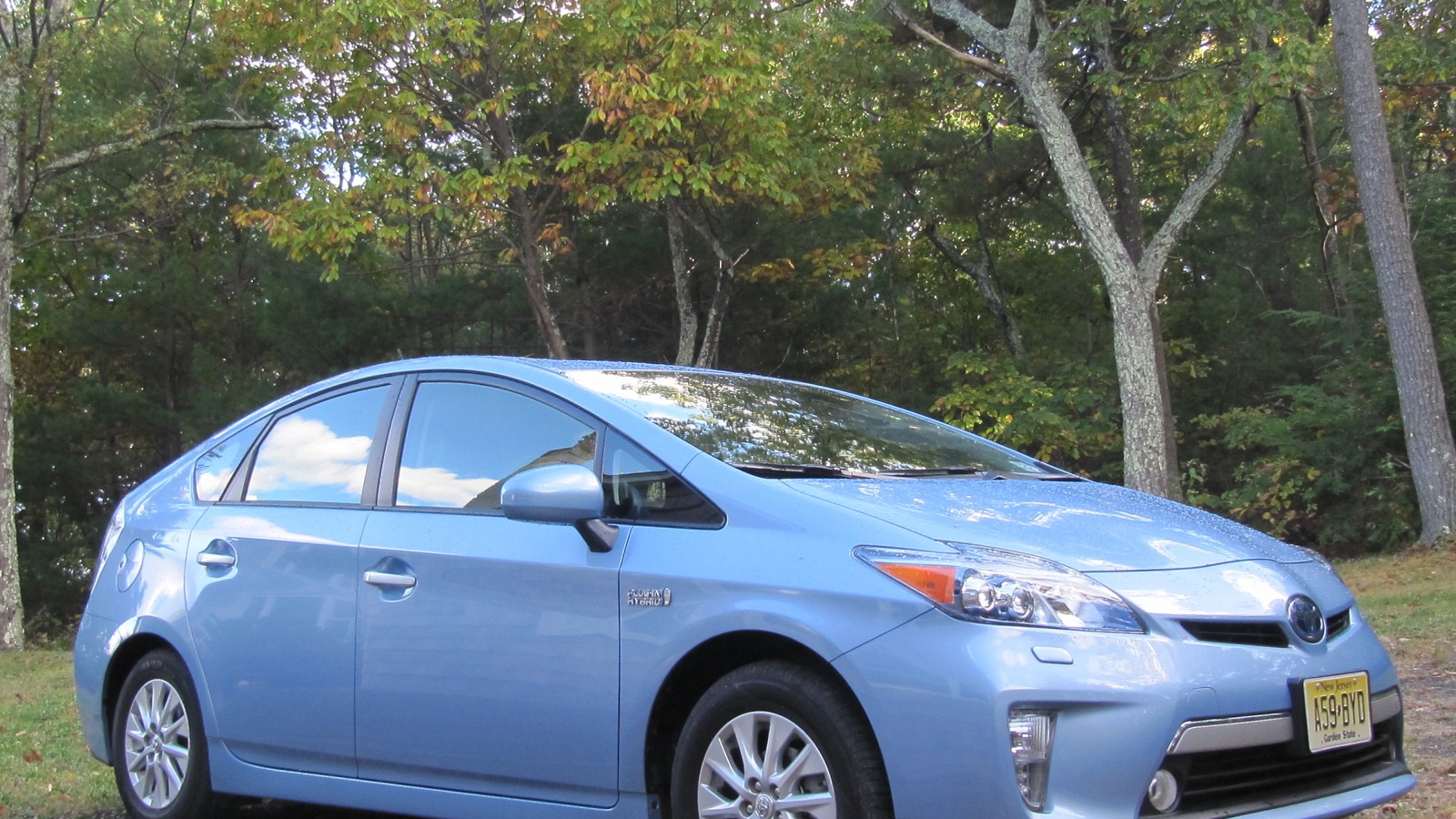 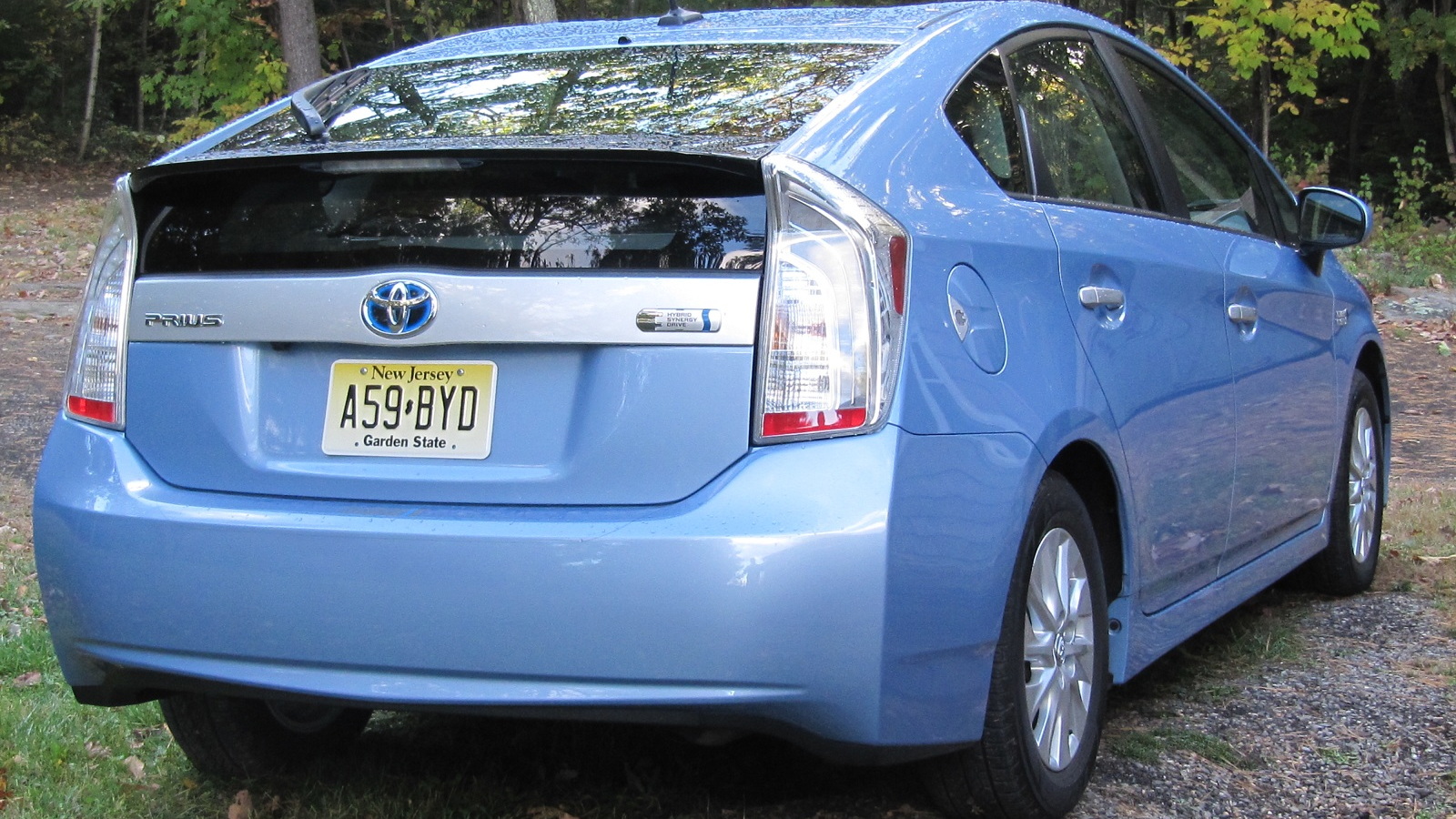 The 2012 Toyota Prius Plug-In Hybrid is the second best-selling plug-in electric car in the U.S. today. It outsells the Nissan Leaf and is bested only by the Chevrolet Volt.

But if you view it as an electric car, it’s an odd duck indeed.

The car’s plug-in hybrid powertrain adds a 4.4-kilowatt-hour lithium-ion battery pack to what is essentially a standard Toyota Prius hybrid. That pack can be recharged by plugging it into a wall outlet.

The EPA says the Prius Plug-In has an electric range of 11 miles, though the small print notes that the car can only do 6 continuous miles electrically on the agency’s city test cycle.

Concentrating to keep it electric

Like the regular Prius, you have to drive gently and with some care to keep the car in electric mode. Even if you do, that doesn’t mean the engine won’t go on.

Having tested a Chevrolet Volt range-extended electric car the previous weekend, we found it disconcerting to unplug the Prius, get in, power the car up—and have the engine fire itself up within seconds. The Volt engine doesn't switch on until the pack is depleted.

The 60-kilowatt (83-horsepower) electric traction motor in the Prius is smaller than the Volt's 111-kW (149-hp) motor, by design. So the 98-hp 1.8-liter engine in the Prius still does the bulk of the propulsion work under heavy loads and at speeds over about 50 mph. Together, the engine and motor put out a maximum of 134 hp.

Moreover, the engine has to stay on enough to keep the catalytic converter heated up to the right temperature to reduce emissions. So even if you’re running all-electrically, you may stop at a traffic light and notice the engine thrumming away up there under the hood—even though the energy diagram doesn’t show it.

That’s all pretty discomfiting if you are trying to use the plug-in Prius like an electric car.

The metric that Toyota would prefer you to use is the percent of time the car propels itself on electricity.

At the launch event outside San Diego in February, the test route covered a variety of city and suburban traffic conditions. We were able to spend a majority of each 5-mile route in all-electric mode, covering more than half of each electrically.

But that wasn’t the case over the course of our long weekend test drive. It covered a total of 326 miles, with about two-thirds freeway driving and one-third use around town.

Over that distance, the car managed to travel 11 percent (37 miles) in electric mode and 89 percent (289 miles) on gasoline.

The plug-in Prius was fairly efficient running on battery power—that 37 miles consumed 10 kWh—and the car told us we used only 6.0 gallons to cover the 289 miles on gasoline, or 48 mpg.

Once the pack is depleted, the Prius Plug-In is rated by the EPA at the same 50 mpg combined as the standard Prius hybrid. Our effective overall gas mileage for our total mileage across both modes was a modestly higher 54 mpg.

But to cover even that relatively low electric distance, we had to plug in the car half a dozen times over three days. The 4.4-kWh battery pack is by far the smallest of any plug-in, though Toyota believes it has optimized the car for overall efficiency.

The plug-in Prius will travel all-electrically at much higher speeds than a standard Prius hybrid. We saw 61 mph at one point, though in general the engine kicked on under medium-to-hard acceleration, above roughly 50 mph, and going up even gentle hills.

We experienced a couple of judders and audible clunks from the powertrain, something we’d never had either in the previous plug-in Prius or conventional Prius hybrids.

Not an electric car

The pack can be recharged either using the 110-Volt charging cable it comes with—housed in the small well at the back of the load-bay floor—or using a 240-Volt Level 2 charging station.

To make our peace with the Toyota Prius Plug-In Hybrid, we concluded that it shouldn’t be viewed as an electric car—or treated like one behind the wheel.

It remained frustrating enough to keep the car in all-electric mode that we gave up halfway through our test.

Instead, we simply drove the car to keep up with traffic, ignoring the engine noise (a muffled howl under heavy acceleration) when it switched on.

And we resolved to ignore the electric-range estimate, which usually started at 11.0 miles and quickly declined—a disadvantage to showing range in tenths of a mile. (Though being able to add 0.2 miles back just by careful braking before stop signs was rewarding.)

As a Prius hybrid, the plug-in Prius works fine. It definitely has more electric range and can operate electrically at higher speeds.

But we continue to wonder: Is that enough to get owners to plug it in regularly—and often—for the limited electric travel it offers?

For some buyers, that’s exactly what they want--and it's important to check whether the numbers add up. One reader explained recently why he chose the Prius Plug-In over the Volt and Leaf—because it fits his driving patterns best.

We wonder whether there will be drivers who buy the plug-in Prius—especially in California, for its single-occupancy HOV-lane access—and never bother to plug it in at all.

Under those circumstances, it’s simply a much more expensive Prius hybrid.

Other that being a not-very-electric car, the Prius Plug-In had all the virtues and vices of the third-generation Toyota Prius we’ve tested several times.

Now in third year of its life, the Prius Multi-Information Display on the horizontal screen high up in the center of the dash is beginning to look dated against the full-color graphic displays of other plug-in hybrids and electric cars.

We’ve never been big fans of the high “flying buttress” console design, which swoops down from the center of the dash and offers an awkward storage space underneath.

The plug-in Prius uses differently patterned and, to our eye, more attractive dark plastics than a standard Prius hybrid for its dash and interior trim.

Functionally, we noticed a few things in the cabin design that didn’t work quite as well as we’d like. The self-dimming rear-view mirror didn’t sufficiently mask the glare of following cars with their brights on, and several times we found ourselves reaching for a dimming lever that wasn’t there.

The overhead button for the interior light isn’t lit, and sits right next to the button to call Toyota’s Safety Connect response center—which we did, twice, while trying to turn on that light at night.

On the plus side, Toyota’s adaptive cruise control worked well in inconsistent freeway traffic. And driving at night, the LED headlights provided perhaps the best high beam we’ve ever seen in a car—illuminating the road ahead so well it almost seemed like daylight.

Visibility out of the Prius was fine to the rear, courtesy of neat folding rear-seat headrests (a feature we wish every car had). Rear three-quarter vision wasn’t great, but the view from the driver’s seat past the windshield pillar was far better than the Volt’s huge blind spot there, aided by a little triangular window at the base of the Prius pillar in front of the door.

We’ve never understood why Toyota sticks with pendant parking-brake levers rather than electric emergency brakes, and our left shin has the bruises to show why we don’t like them.

Toyota recently reiterated that it doesn’t believe that battery technology is mature enough to meet the needs of the market. And it canceled plans to produce its eQ, an electric version of the Scion iQ minicar. (It still offers the well-reviewed RAV4 EV, which is now on sale in California with a battery and electric drivetrain designed by Tesla Motors—but that’s another story).

There was also the inevitable mandatory $760 delivery fee, which brought the total to $40,628.

The Prius Plug-In Hybrid qualifies for a $2,500 Federal income-tax credit for the purchase of an electric car, and a $1,500 purchase rebate from the state of California.

Importantly, it also qualifies for a “green sticker” that gives the car single-occupancy access to that state’s carpool lanes.