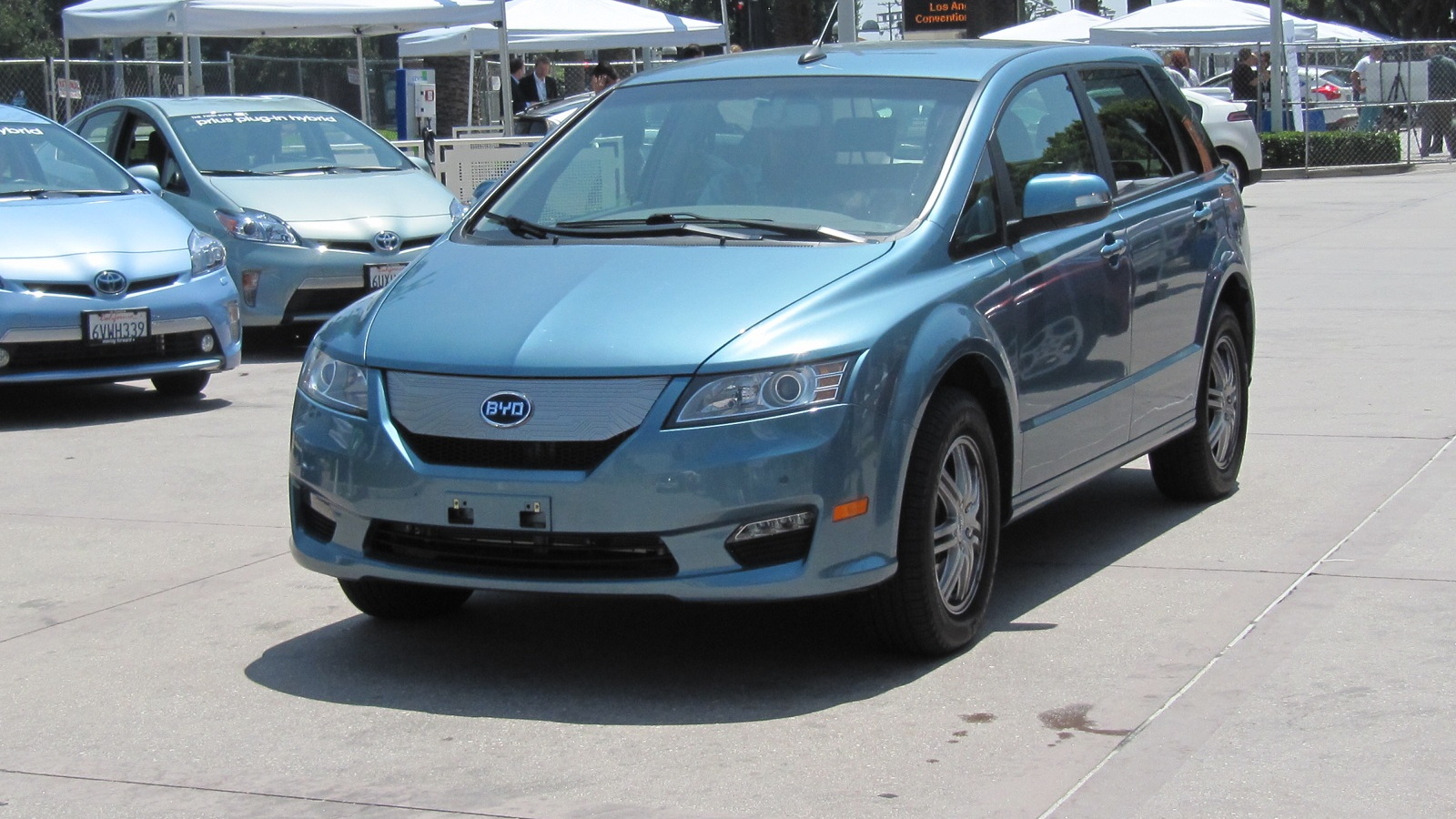 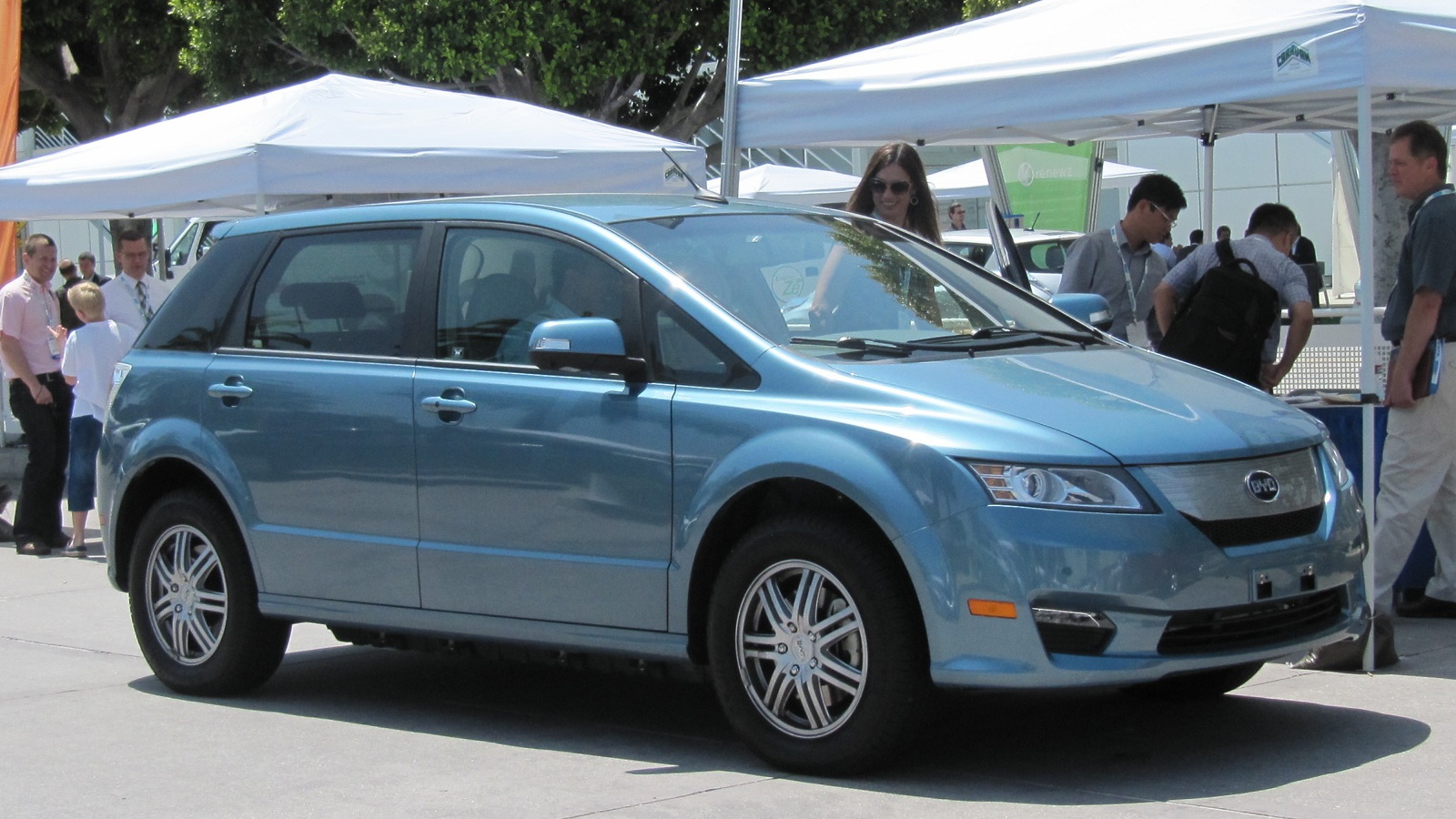 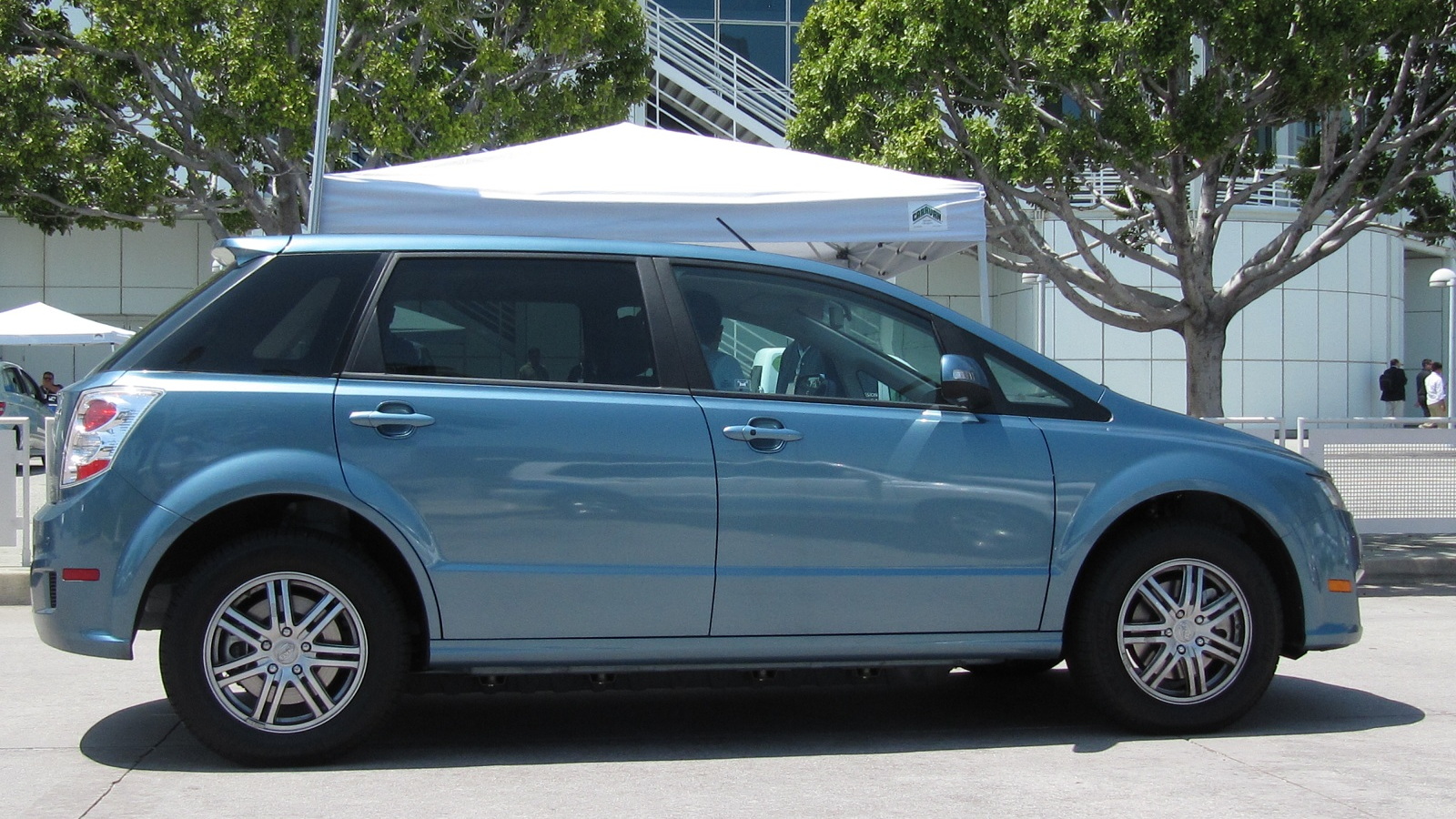 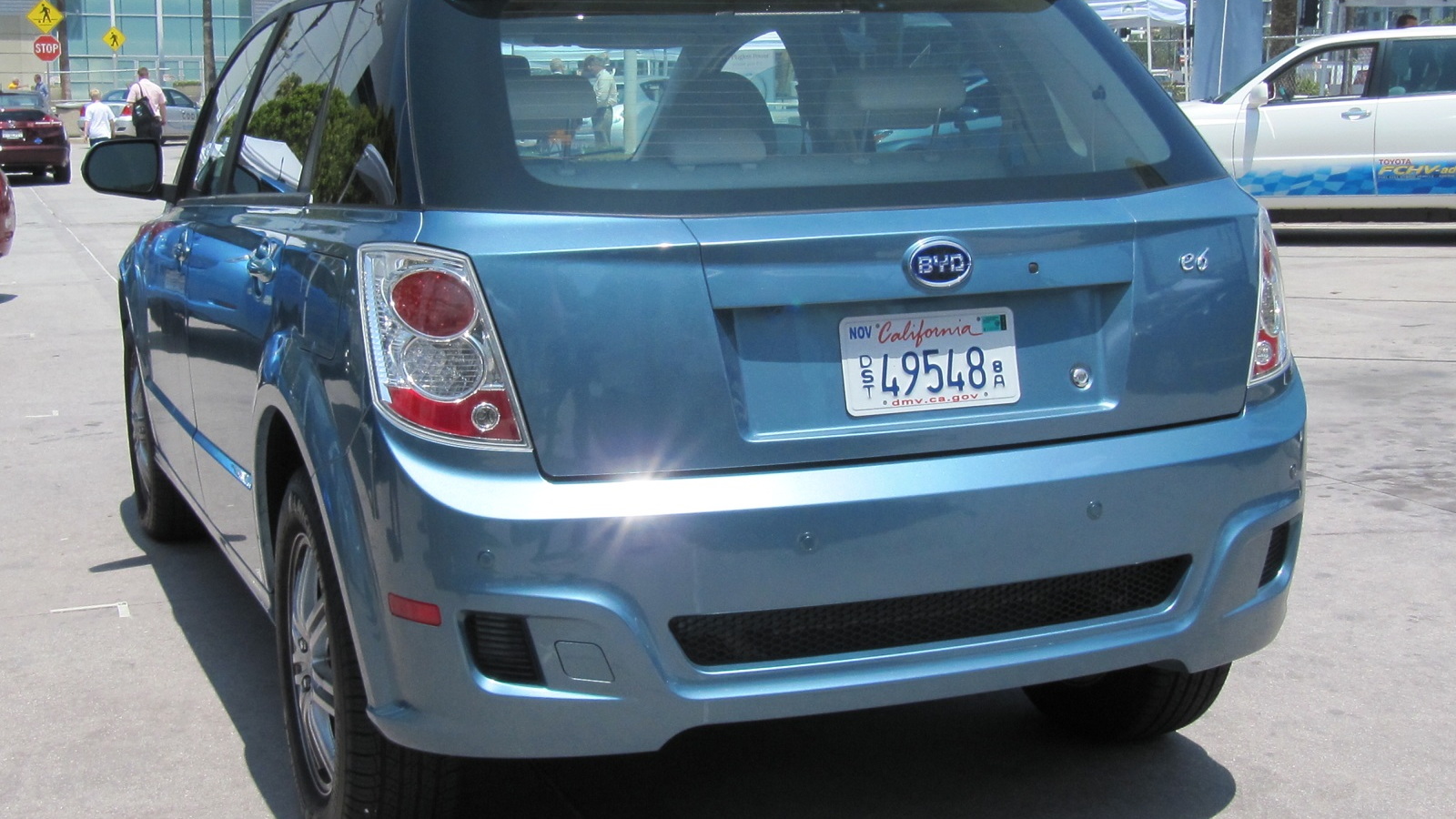 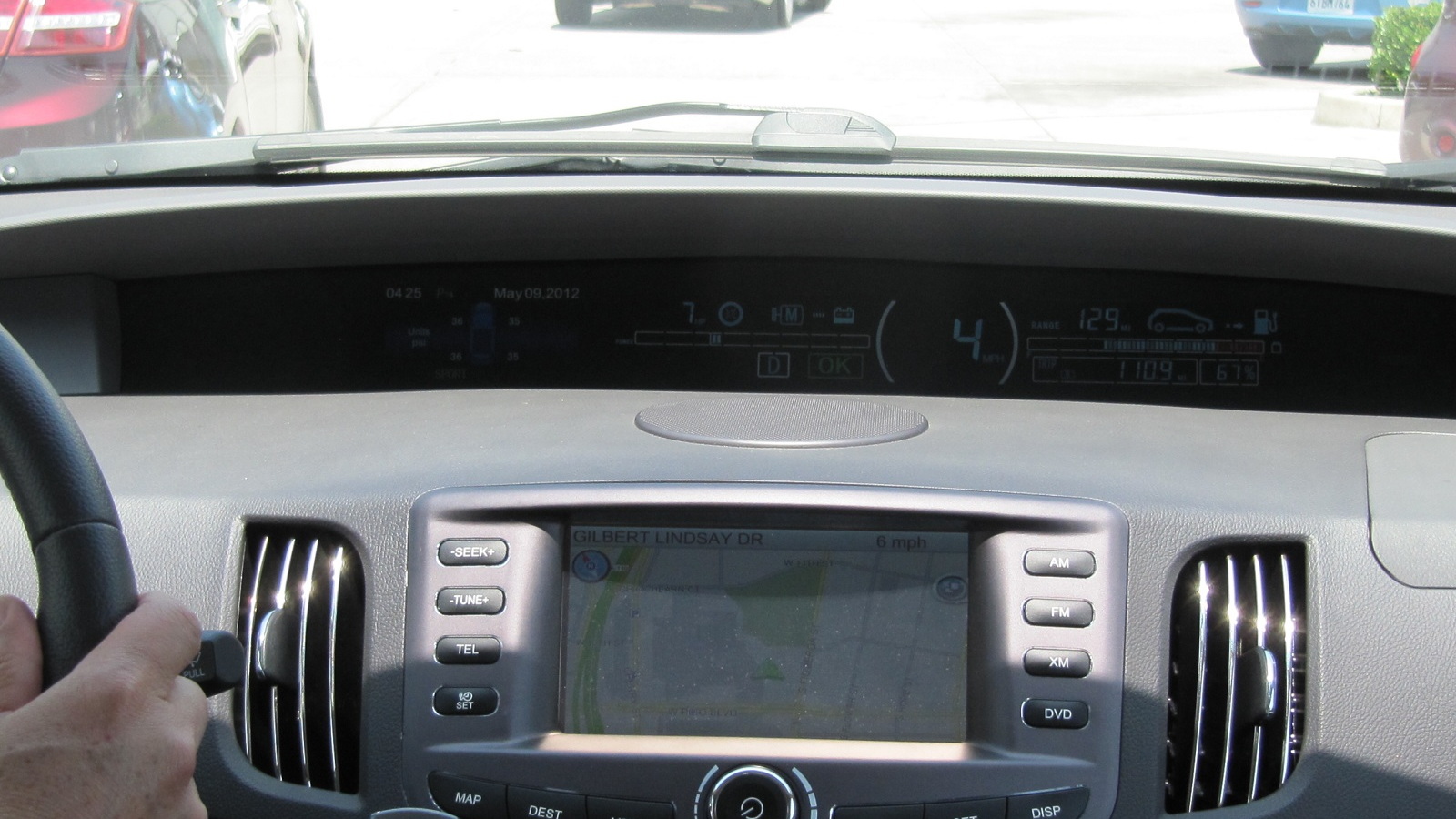 Most Chinese carmakers have backed away from plans to attack the U.S. market, and their hopes of dominating electric cars have slowed.

But Chinese maker BYD continues to develop and test the e6 all-electric crossover utility it hopes to sell in the U.S. within a couple of years.

Now, we've had the chance to take a brief drive in the latest, updated BYD e6--known internally as the BYD e6-B. Its front styling has a grille-like opening below the blanking panel, and the front bumper and lower body panel are restyled.

We didn't get the usual full day's test drive, but were limited to several laps around the Los Angeles Convention Center.

Still, both driving and riding, we were able to come away with first impressions of this potentially important new electric car.

The car we tested is an updated version of the BYD e6 that has gone into taxi service in several Chinese cities. BYD presented its first results from the taxi test a year ago.

The styling of the BYD e6 is unremarkable. It attracted virtually no attention on the road, and its slab sides and vaguely Ford Edge-like shape look functional and pleasant enough.

Inside, the dash is essentially symmetrical, sweeping around to wrap into the doors. Upholstery is a mix of perforated and plain vinyl in a pleasant beige, with black plastic trim panels.

The long, shallow, central instrument panel display looks very much like the Multi-Information Display of a current Toyota Prius hybrid--a resemblance increased by the BYD's small drive selector, which looks and operates much like the one in Prius as well.

Approaching the BYD e6 while it's powered up, there's a noticeable humming whine coming from  under the hood, unlike any other electric car we've seen.

Getting into the car is easy enough, with especially long doors giving good access to the rear seat. The front seats are comfortable, though the electric adjustment only slides them back and forth--no electric tilt or rake is available. Visibility is good from most angles in the driver's seat, partially due to fairly slim pillars.

There's room for three in back, or two comfortably separated with the rear-seat armrest pulled down. Rear seat passengers will find good legroom even with the front seats pushed back.

Because the battery pack is in the floorpan, the rear seat is low to the floor, producing a knees-up seating position that could get uncomfortable--exacerbated by a rear seat back that's raked sharply to the rear. And the rear-seat cushions are peculiarly flat, without the subtle shaping of the seat foam found in modern cars.

Storage bins in the rear doors include speakers indicating an Infinity sound system, although the factory representative from BYD who accompanied our drive wasn't able to provide many details on the car beyond its numeric specifications.

While China drives on the right side of the road (e.g. left-hand-drive cars), the symmetrical dashboard and central instruments of the BYD e6 peculiarly site the numeric speed display to the right of the car's center line--far from the sight lines of a driver sitting on the left.


On the road, the BYD e6 moves away from rest smoothly and predictably, but with increasing whine from the drive motor and power electronics. The drivetrain whine was more noticeable from the front seats than in the rear.

In Normal mode, acceleration is limited to about 75 horsepower, making the car feel heavy and ponderous. Switch to Sport mode, however, and the peak power indicated at 130 hp is unleashed, meaning the e6 moves out smartly and has enough mid-range acceleration for fast-moving urban traffic.

The current BYD e6 has a large 60-kilowatt-hour lithium-ion battery pack, and its motor was quoted at an output of 75 kilowatts.

That translates to 100 hp, which makes the 130-hp rating we saw on the dash somewhat perplexing--unless the 75 kW is a sustained power rating, with short peaks possible at the higher output.

BYD representatives quoted a 180-mile range, which they said was derived from the Chinese urban and highway efficiency rating cycle.

The brake pedal has a mushy feel, with regenerative braking only engaging in the bottom half of its travel. The ride is good on smooth pavement, but quickly turns harsh as road surfaces get rough.

Bumps weren't absorbed particularly smoothly, and BYD would likely benefit from some sophisticated spring-rate and damper engineering to make the ride more forgiving.

There's also a certain amount of drivetrain flexibility, so that in some combinations of acceleration and braking, steering feedback and power delivery can change abruptly. We experienced a loud, unexpected "clunk" from the right front suspension during braking, but couldn't repeat it.

Four right-hand turns around a loop of less than 2 miles gave us no meaningful opportunity to test the BYD e6 handling, but accelerating hard out of a corner at 20 mph was enough to make the front tires both squeal and lose traction.

The biggest drawback of the e6 from a passenger's point of view is the workmanship of the interior. While it looks good from a distance, myriad details show that BYD isn't close to approaching the global quality standards of a Toyota, Volkswagen, or General Motors.

A wiring bundle covered in bright orange plastic cladding protruded from under the driver's seat into the left-rear passenger's footwell, simply lying on the carpet--the kind of detail that wouldn't make it past the first review in any vehicle program from a major global maker.

Wrinkles in the headliner where it tucked behind door moldings, unfinished surfaces plainly visible next to neatly covered ones, and many other little flaws conveyed a general sloppiness in the small details.

It gave the BYD e6 the interior appearance of a car whose designers closely imitated a modern car from a major automaker without really understanding the hard work that goes into making interiors close to perfect.

We noted that windshield, door, and roof pillars all carried airbag logos--suggesting that the BYD e6 has at least eight airbags (counting two in the dash).

BYD reps said the e6 comes with a 3.3-kW built-in charger--which seems insufficient for a 60-kWh pack--and also a 10-kW charger that uses the Chinese DC fast-charging standard, which is incompatible with both the Japanese CHAdeMO and the North American/ European SAE Combo standards.

BYD now says the e6 will arrive on the U.S. market in 2013, with first sales to fleets. We'll believe it when we see it, as we think BYD has some more development work to do before the electric crossover will be widely acceptable to U.S. buyers.

Our test drive came during a ride-and-drive event held at the 26th annual Electric Vehicle Symposium, which wrapped up today in Los Angeles. The next EVS will be in Barcelona in November 2013.