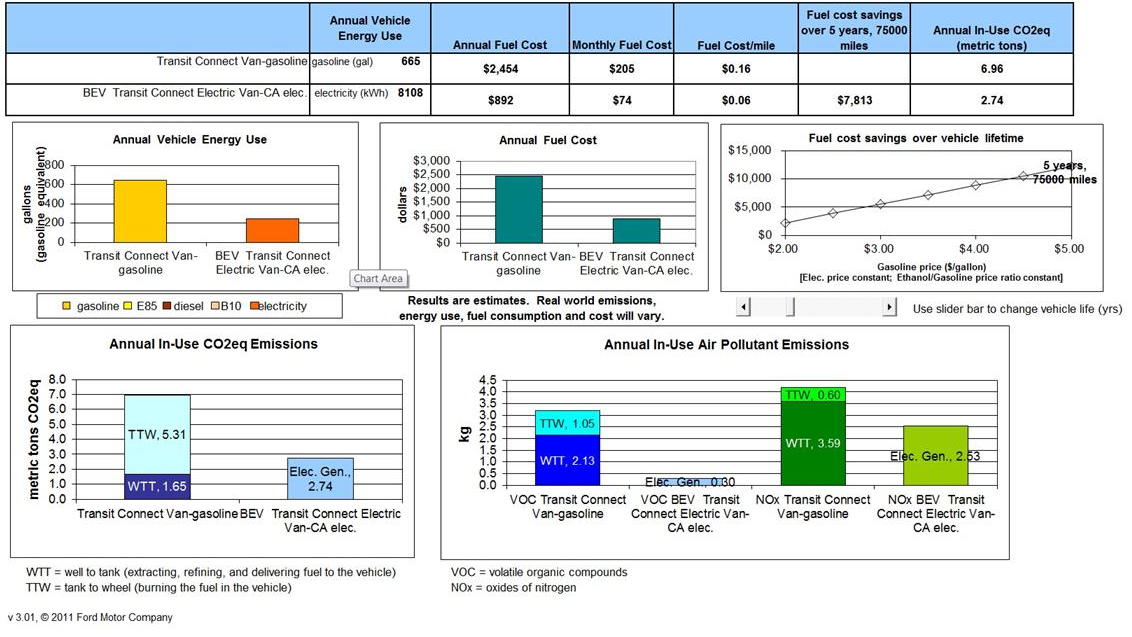 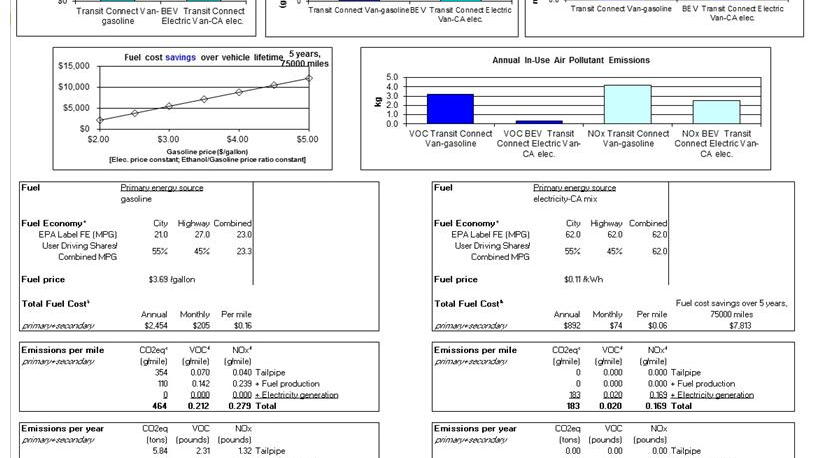 Unlike many retail car buyers, they analyze vehicles without a shred of emotion, basing their decisions on lifetime ownership costs for vehicles that meet their needs.

More and more, though, those fleet buyers are being asked to help reduce their employers' overall fuel costs and carbon emissions profiles.

Now Ford has created a tool for those customers that models the total cost of ownership and lifetime emissions for different vehicles.

Users enter local electricity prices and gasoline and diesel fuel costs, as well as the mileage they expect the vehicle to cover, how much of that will be city travel versus highway miles, and how many years they plan to own the vehicle.

The tool then compares any two specified vehicles based on those inputs and the EPA's ratings for fuel efficiency and (in the case of plug-in vehicles) electric efficiency.

Using a model from Argonne National Lab known as GREET, it estimates the vehicle's lifetime wells-to-wheels emissions of carbon dioxide (CO2)--allowing users to compare the carbon profile of miles covered via power from their regional electric grid versus those covered by burning gasoline or diesel fuel.

For the upstream emissions from electricity generation, the model uses regional grid emissions numbers based on data from the U.S. Energy Information Authority in its "Annual Energy Outlook."

We talked at some length to Sandy Winkler, of Ford's research and advanced engineering group, whose team built the tool.

She said that while fleet buyers are still primarily driven by ownership cost--of which fuel is the largest portion--many larger corporations have embarked on programs to reduce their global carbon emissions.

The burden of calculating those emissions for the companies' vehicles falls on the fleet managers, and the Ford tool is expected to provide data for those analyses.

The screens you see here are from the first version, and Winkler's group is moving forward with updates, including the addition of new 2013 vehicles and safety ratings for all vehicles listed.

After that, they hope to expand it from head-to-head vehicle results to offering comparisons between the customer's base fleet and a hypothetical new fleet of multiple vehicles.

It's worth noting that some analysts feel the GREET model is overly pessimistic on the carbon emissions of 1 mile driven on grid power.

In a rough comparison we did on the phone with Winkler, the total lifetime carbon emissions for the Ford Transit Connect Electric came out higher in some U.S. regions than those of the comparable 23-mpg gasoline Transit Connect.

That appears to conflict with results modeled in a landmark 2007 study on the environmental effects of electric transport, done jointly by the Electric Power Research Institute (EPRI) and the Natural Resources Defense Council (NRDC).

That study is often considered the definitive analysis for the U.S. market. Ford's choice of a more pessimistic model could, potentially, skew fleet buyers' decisions away from plug-in electric vehicles and toward vehicles that use combustion engines.

Still, those are issues that could be analyzed and refined with public commentary on the model.

And that's the catch.


Ford's policy is not to give the tool out to the public, or even to its customers to use. "We have no plans at this point to make it publicly available," Winkler said firmly.

Instead, the company is only releasing it to fleet sales managers, to use with customers as they work to convince them of the merits of Ford's fleet vehicles.

We wouldn't be surprised if some clever green-car hackers pull together a very similar tool, based on the same publicly available data sources that Ford is using.

In fact, we rather hope that happens--if it hasn't already.

Until then, if you want to do some comparisons of your own, figure out where your nearest Ford fleet sales office is--and make friends with a sales manager.