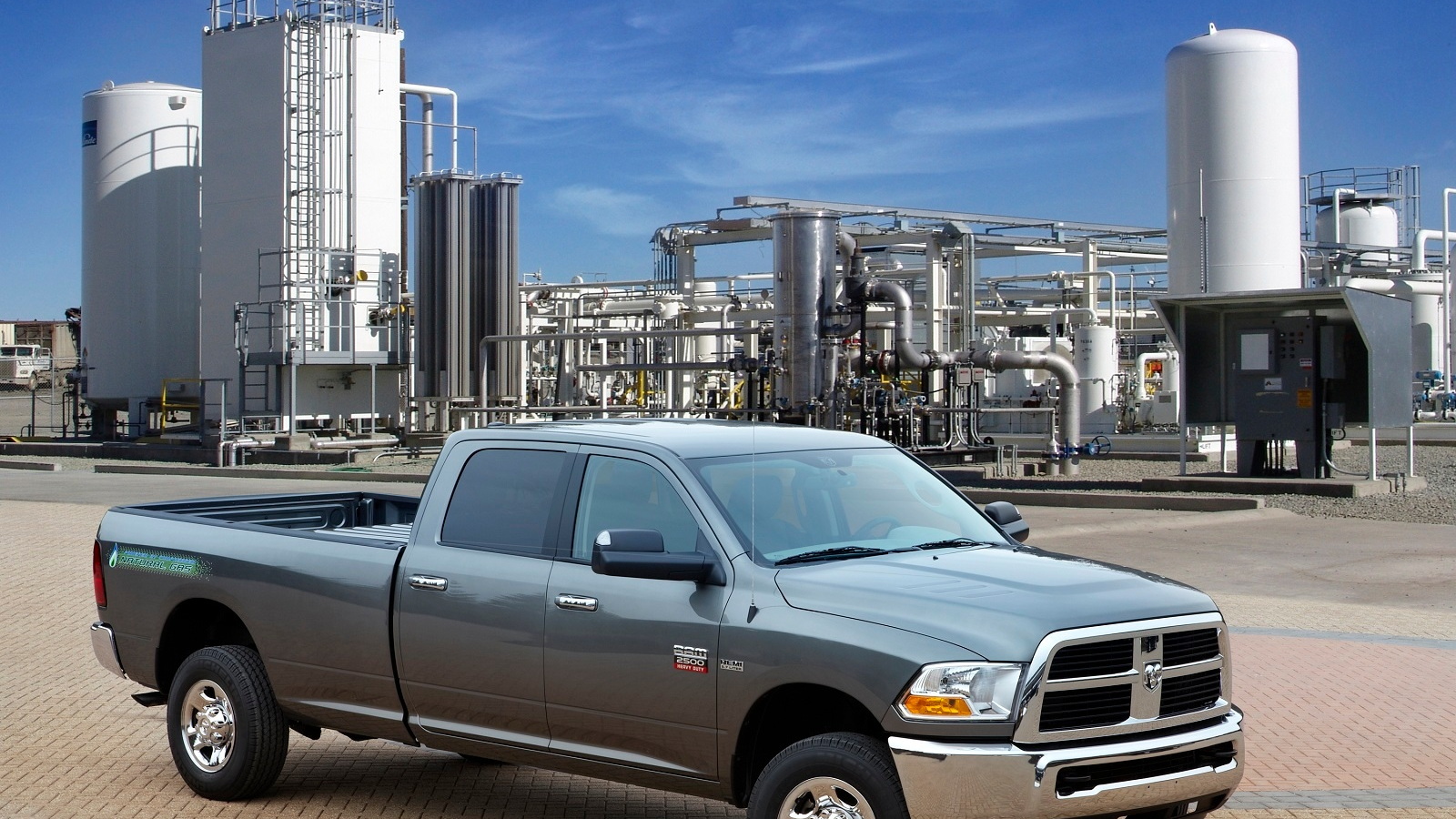 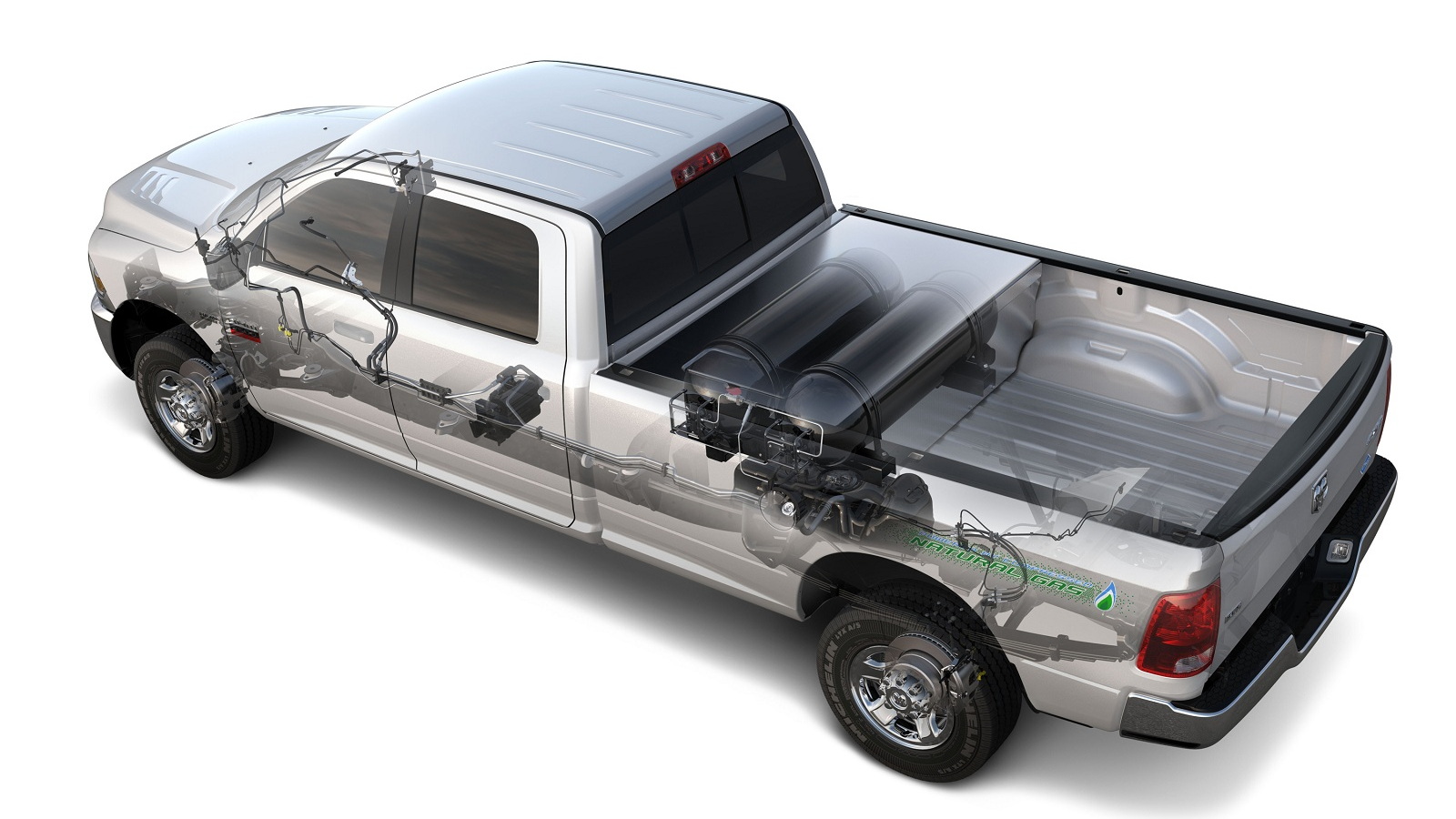 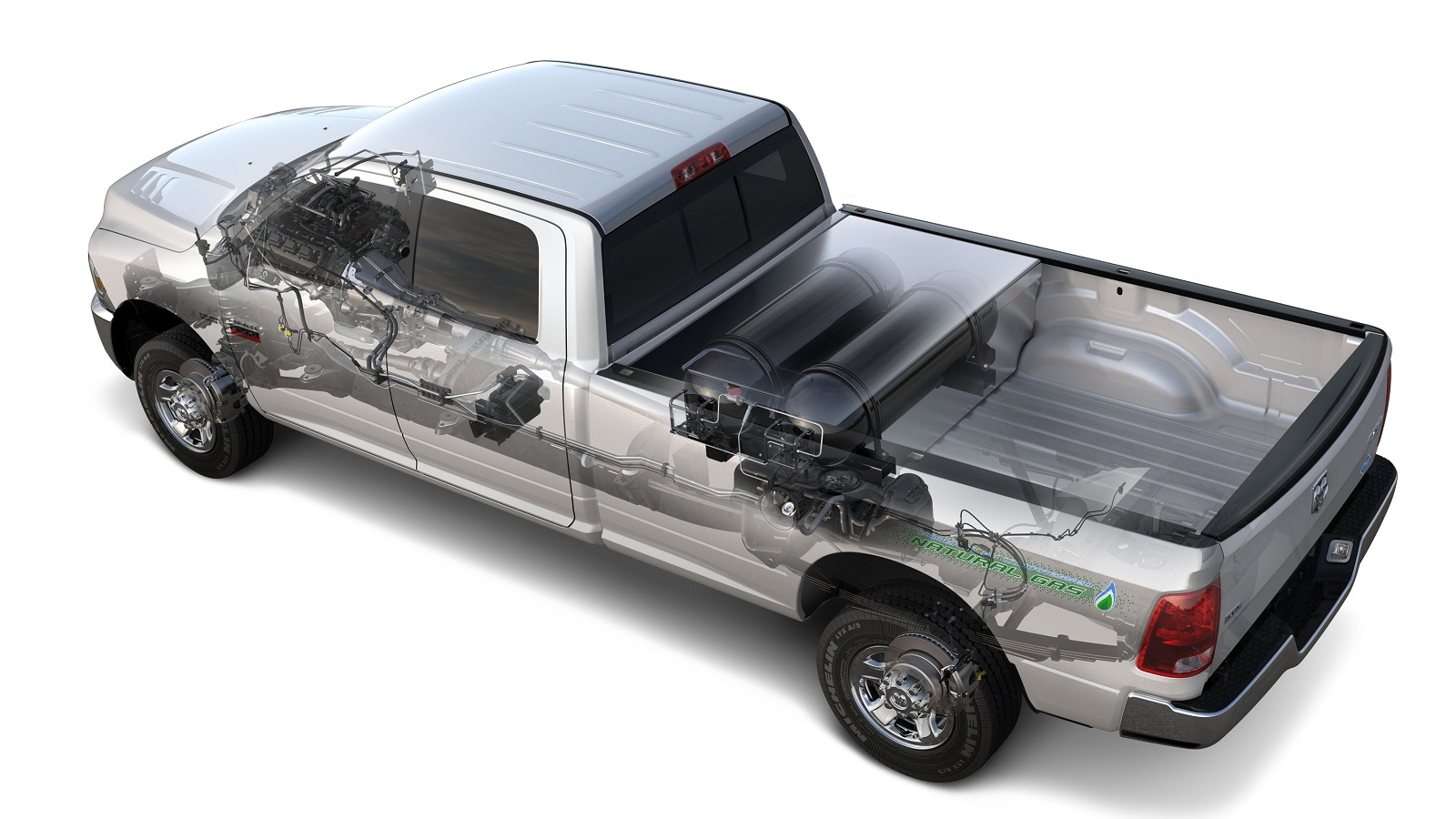 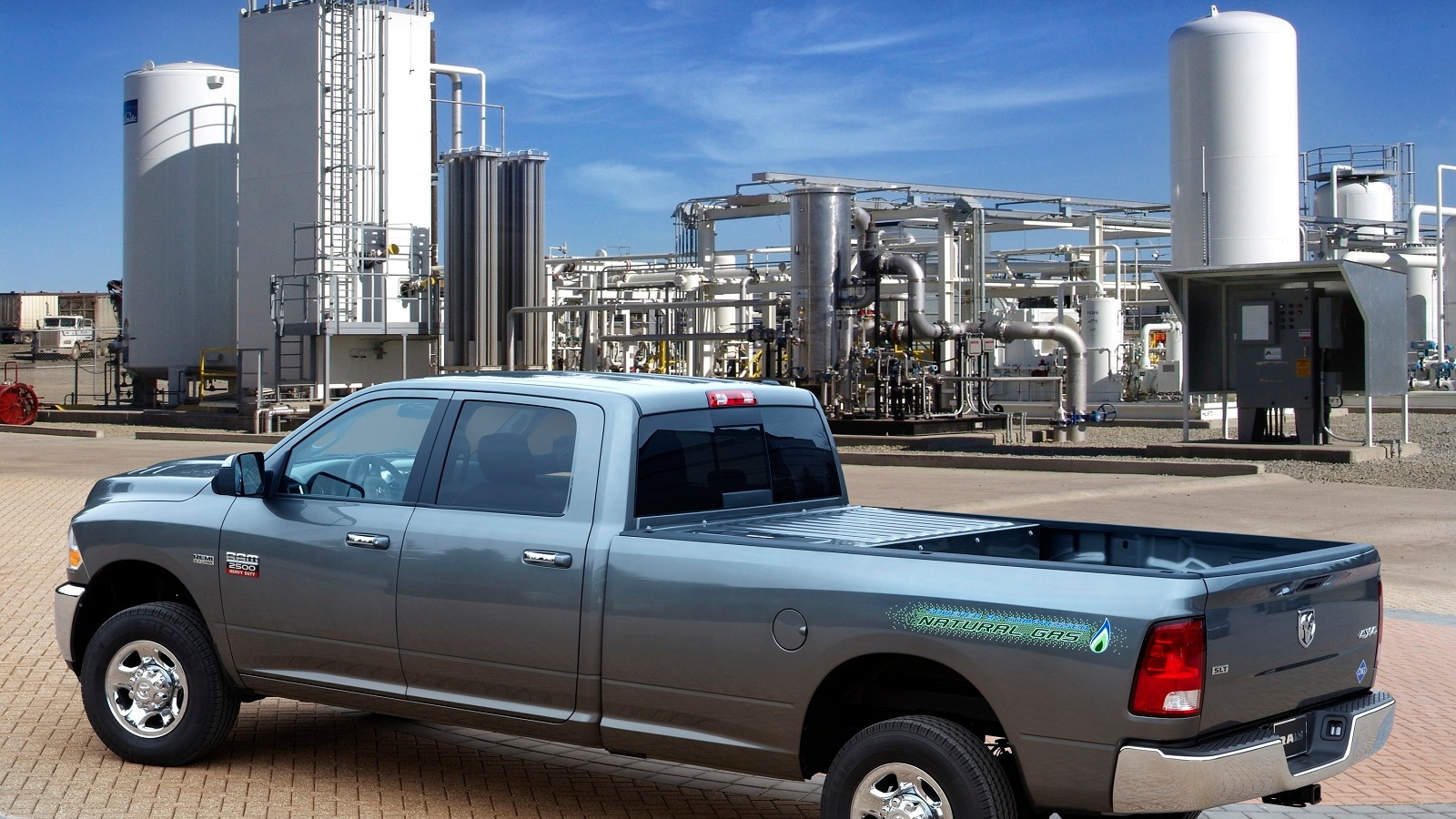 We missed it last week while we were covering all the new cars at the Geneva Motor Show, but Chrysler has officially stepped forward into the world of natural-gas vehicles.

Its Ram truck brand announced that it would offer a bi-fuel version of its 2500 Heavy Duty pickup, to be known as the Ram 2500 HD CNG (for compressed natural gas).

The news followed--by one day--a very similar announcement from GM, which said it would sell bi-fuel versions of its 2013 Chevy Silverado and GMC Sierra pickup trucks.

Chrysler's differs, however, in that the CNG Ram will be built right in the company's pickup truck plant in Saltillo, Mexico. GM sends its natural-gas pickups 70 miles to a converter's plant for final installation.

It uses a version of the company's 5.7-liter Hemi V-8 engine, converted to run on natural gas as well as gasoline.

Engine changes include a redesigned cylinder head with a second set of fuel injectors for the natural gas, a CNG-specific fuel rail, hardened valves and valve seats, new spark plugs, and changes to the powertrain-control software to provide seamless operation on either fuel.

A pair of 4.6-cubic-foot CNG tanks are bolted to the frame, inside a reinforced box at the front of the 8-foot pickup bed, with a second fuel filler accessible through the standard gasoline door.

By energy content, that's the equivalent of 18.2 gallons of gasoline, giving the 2500 HD CNG a range of 255 miles, with another 112 miles provided by the small gasoline backup tank.

The 5-year/100,000-mile powertrain warranty has been expanded to cover all the natural-gas specific engine parts. The tanks, their protective compartment, and the new fuel filler are covered under the vehicle's 3-year/36,000-mile warranty.

By default, the natural-gas Ram operates on its alternate fuel, although a trace of gasoline may be used as the engine is started. When the CNG tanks are emptied, the truck shifts automatically to running on gasoline.

Chrysler's owner, Fiat, sells more natural-gas vehicles in Europe than any other maker; the company says Fiat has 80 percent of the CNG vehicle market. Since 1997, it has sold almost half a million CNG-powered cars and light commercial vehicles.

Chrysler executives had previewed the natural-gas Ram pickup truck last year, and Chrysler may expand its range of alternative-fuel vehicles to CNG-powered passenger cars too (joining Honda)--although perhaps not until 2017.

The two announcements from Chrysler and GM were remarkably similar, right down to citations of the expected buyers: "telecommunications companies, public utilities, natural gas production firms, and government agencies."

The Ram 2500 HD CNG is now open for orders (by fleets) in either ST or SLT trim, with deliveries expected to start in July. According to Chrysler spokesman Nick Cappa, it will be offered as a 2012 model--even that late in the year.

Now that GM and Chrysler offer CNG pickups through their dealers, will Ford join the crowd? Spokesman Mike Levine said Ford offers more vehicles with CNG-capable engines than any other full-line maker.

He cited the E-Series full-size van, the F-Series Super Duty pickup, the F-650 medium-duty truck, and various rolling chassis as vehicles that can be ordered with either a 6.2-liter V-8 or a 6.8-liter V-10 fitted with hardened valves and seats, plus other modifications, to enable them to run on natural gas.

The Ford Transit Connect small delivery van can also be ordered with its 2.0-liter four-cylinder engine hardened for natural gas. In all those cases, the option costs $250 to $350.

Ford has certified several aftermarket companies to perform natural-gas conversions--though unlike GM and Chrysler, Ford does not warranty the natural-gas equipment on the vehicle, but only its engine.