We've already shown you live photos of the 2013 Elantra Coupe and 2013 Elantra GT five-door hatchback, shot as the cars were revealed for the first time.

John Krafcik, CEO of Hyundai America, introduce the cars and offered some details their place in the expanding Elantra range.

The new models show the importance of the Elantra compact to Hyundai--and to its pursuit of higher and better gas-mileage ratings.

All three Elantras share the same 1.8-liter four-cylinder engine, paired with either a six-speed manual transmission or a six-speed automatic.

The sleek roofline of the 2013 Hyundai Elantra Coupe may make the back seat challenging for adults--we'll let you know when we test the car--but it's rated at 110 cubic feet of interior space, with 14.8 cubic feet of trunk space. 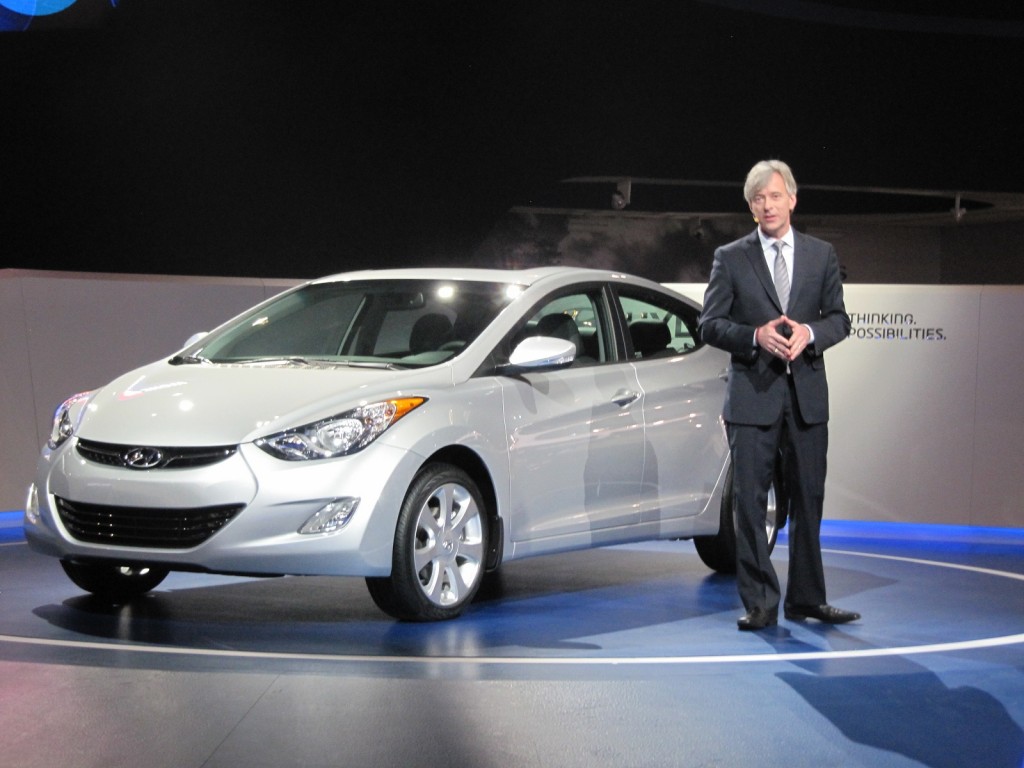 Hyundai says the 2013 Elantra GT five-door hatchback offers more interior volume than the Ford Focus, Mazda3, Toyota Matrix, or Volkswagen Golf. And carefully picking its statistics, it also notes that the Elantra GT's cargo volume is greater than that of the (subcompact) Nissan Juke.

The company demonstrated this using a 151-pound employee named Miles, who trotted out with a variety of dumbbells to demonstrate the added weight of the competitors.

The punchline? "The Elantra GT is the lightest vehicle in its class, by a Miles." [groan]

A Mazda spokeswoman later noted that, by her figures, Hyundai appeared to have compared its manual-transmission Elantra GT to an automatic version of the Mazda3.

But we liked the pun anyway. 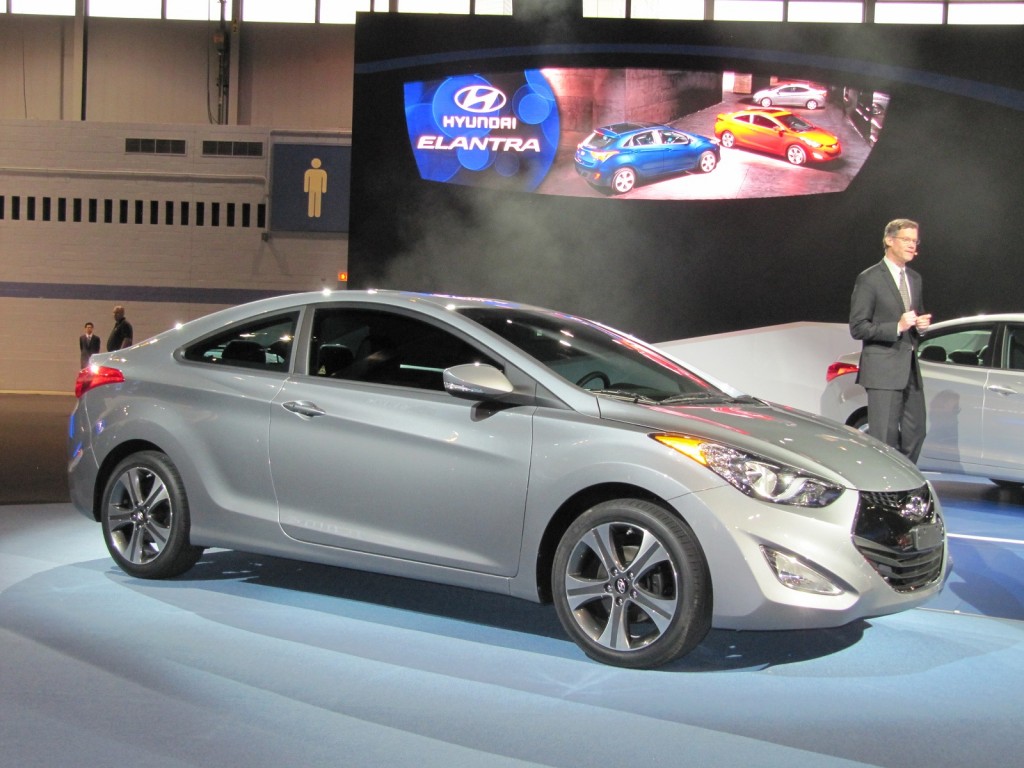 He cited a test by Popular Mechanics in which the magazine tested both the 2012 Hyundai Elantra sedan and a 2012 Ford Focus SFE (the Focus model also rated at 40 mpg highway).

The magazine found that at a steady speed, both cars surpassed their 40-mpg ratings at a steady 55 mph.

Although Krafcik didn't say so, the moral of the story is that if you drive at 55 mph on highways, you'll get much better gas mileage than at 75 mph. Very few people do so, however, so the 75-mph rating is the more useful one. 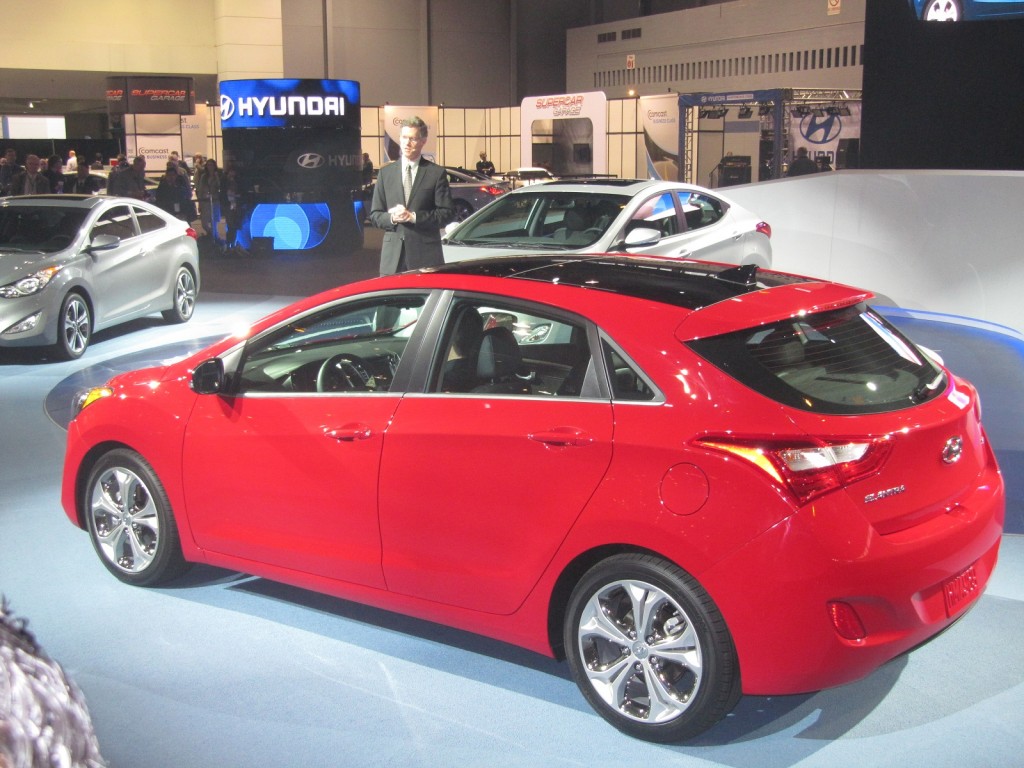 "Gas mileage is expected," Krafcik said in his presentation. Indeed, while the Chicago Auto Show has traditionally been strong on trucks, only a single revised crossover--the 2013 GMC Acadia range--was launched.

Otherwise, Chicago was all about new cars, including many models previously introduced at last month's Detroit Auto Show.

The Elantra range now includes three models rated at 40 mpg on the highway: the original four-door sedan (in manual and automatic versions), and the new coupe with manual transmission.

Other Hyundai 40-mpg-highway models are the new Veloster sport coupe with manual transmission, the Accent subcompact (in both manual and automatic versions), and the Sonata Hybrid.