Imagine the scenario: You’re heading to a meeting and leave your shiny 2011 Nissan Leaf electric car plugged in at the local charging station, confident that it will have enough charge to get you back home when you return in a few hours.

Then you return to find another electric car owner has unplugged your car to charge their own vehicle, leaving your car at the mercy of California’s new electric-car charging bill which could result in your car being towed.

And of course, leaving you without enough charge to make it home.

That’s what happened to one Los Angeles Nissan Leaf owner when he visited LAX airport.

Unsure if he should unplug the usurping car from the charger, and noting that it was almost full, he chose to vent his fury on the popular myNissanLeaf owners’ forum.

“You just unplugged my Leaf. I left a sign on the dashboard, did you read it?” he wrote, pointing out that he’d left a note in the dashboard asking to be left in until 9:30am. “You saw the [charging] lights, [with the] middle [one] blinking. I only got 30 minutes of charge,” he continued. “Not enough for 60 miles return trip."

As it became apparent that the car that took the charging station was almost full when it was plugged in--and stayed there for days, taking up a valuable electric car charging space--owners got mad. 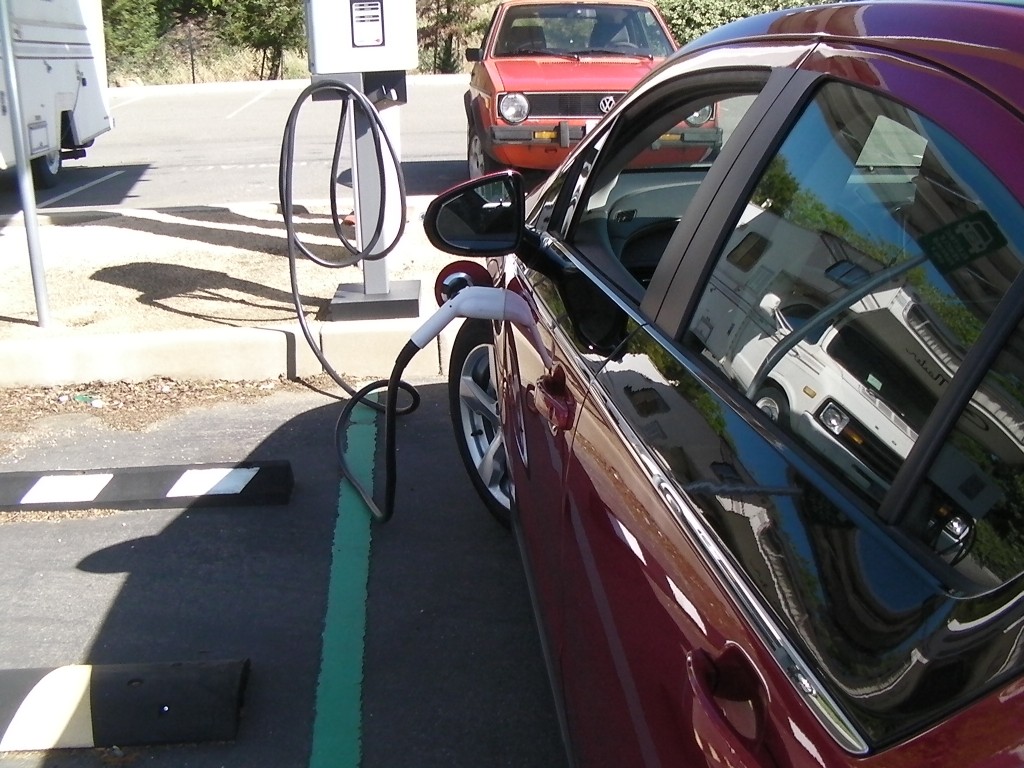 Current electric car charging stations are often located between two parking bays, allowing for one car either side to make use of them.  It’s not uncommon to see two electric cars side-by-side, with one unplugged while another charges.

As we’ve covered before, there’s an unwritten but strong code of conduct to using charging stations. Unplugging someone else’s car to charge your own is considered rude -- unless they’ve placed a note in their car’s windshield giving you permission to do so.

Today, the act of maliciously unplugging someone else’s car without permission is almost unheard of. But the recent California Assembly Bill 475 could add a nasty twist to such an inconsiderate act.

Backed by General Motors, it would make being parked in an electric-car charging bay without being plugged in illegal. Under that bill, the Leaf owner who was unknowingly unplugged could have found his car being towed for a parking violation.

But the story doesn’t stop here. Many of the regulars at the myNissanLeaf forum set about to track down the inconsiderate unplugger to let him know just how unhappy they were about his action.

After leaving a note on the offending car’s windshield, owners kept a watch on the car, noting that it didn’t move -- it still hasn’t -- since the offending event two weeks ago. They also identified the owner via a photograph of his Leaf’s customized license plate that he had put on Facebook.

At the moment, the driver hasn’t responded to any emails from Leaf drivers--or returned to his car--but we can only imagine the surprise reception that awaits him when he flies back home.

Under AB 475, by the way, the offending Leaf driver would have every legal right to leave his or her car plugged in to the recharging station--for months at a time.

Electric car charging stations are currently a hot topic -- both for electric-car drivers and those who have yet to get a plug-in car.

We think the message is simple: Be courteous to other charging station users, follow simple etiquette, don't unplug anyone without their permission, and make sure you don’t leave your car parked in a charging bay for weeks at a time.