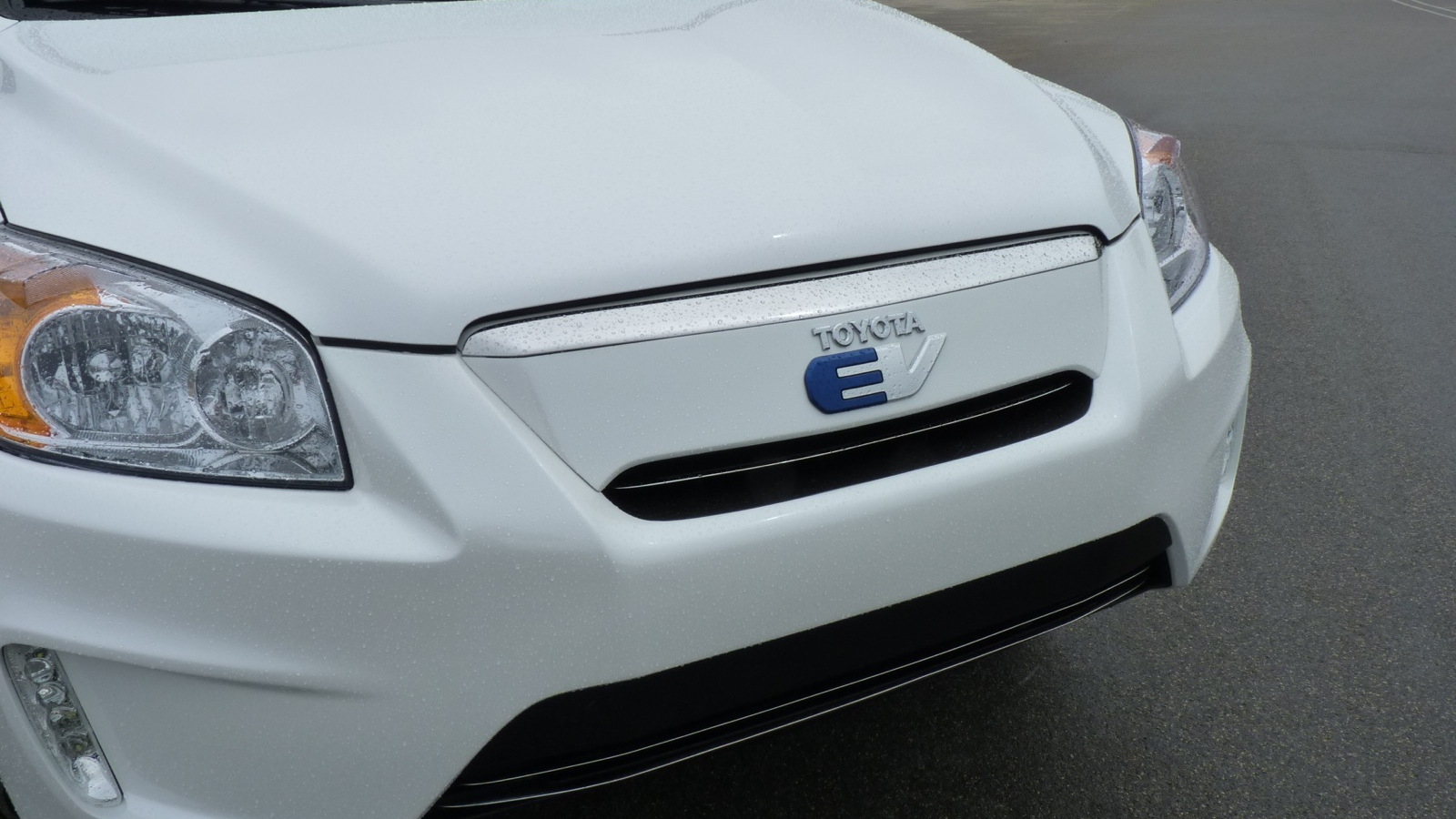 Just a year ago, seeing the 'RAV4, Powered by Tesla' startup greeting would have been almost unthinkable.

Yet last May, Toyota and Tesla inked a deal that took the industry by surprise—and left a lot of observers scratching their heads. And nearly eleven months since that deal—and nine months since it was announced that Tesla would be powering an all-new RAV4 EV, last July—the agreement makes a lot more sense.

Through one of the first projects in this agreement, Tesla was to provide the battery, motor system, and all the core powertrain components; Toyota would integrate the powertrain with the rest of the vehicle and apply its tuning expertise and manufacturing know-how to the setup.

It's already here, and it all works. In an industry where vehicle development takes three to five years, and advanced powertrains can take far longer, the project has proceeded at a Tesla-like speed. Last November, at the Los Angeles auto show, Toyota gave the first glimpse of the RAV4 EV—in its so-called Phase Zero stage—then this February Tesla completed its first delivery of 31 Phase Zero vehicles, destined for fleet testing.

Why the RAV4? Although Toyota wouldn't say exactly, we think it's because the move is something like GM bringing back its mythical EV1. About a decade ago, Toyota outfitted some of its RAV4 vehicles from that era up to 2003 with a motor system and battery (then nickel-metal hydride). Most RAV4 EV owners, unlike those of other test EVs of that era, were allowed to keep their vehicles, and they've become central conversation points in the EV community over the years.

An EV conversion, but one done right

Technically, though, the RAV4 EV isn't a new vehicle—or a freshly engineered one. It's a conversion. For each of these Phase Zero RAV4 EVs, the project team starts with a stock RAV4 V6 Sport, with the Sport Appearance Package—yes, the one without the tire hanging on the hatch—then removes all of the powertrain and fuel-system components, and performs a full conversion.

Onboard, the battery technology, inverters, and even the induction motor system are all closely related (yet slightly different) to what's loaded into the Tesla Roadster. It's even more closely related to what will power the upcoming Model S, and it uses the same Tesla-developed liquid-cooling technology for the 37-kWh packs in the RAV4 EV—which pack in the vicinity of 4,000 cells altogether. As for those battery packs, they're mounted on the underside of the RAV4, and combined with some tough-looking shielding they lower the vehicle's ground clearance by an inch or two.

In addition to various badging and EV reminders inside and out, the EV gets its own front-end appearance, done by Toyota's CALTY design studio in Newport Beach, California—and those in the know would be able to spot it from afar.

One of the targets of the project was to produce the same level of responsiveness as a V-6, and it delivers on that aim in apparent responsiveness, if not in outright acceleration times. The EV takes about nine seconds to get to 60 mph, but because of the electric powertrain's instantaneous throttle response and plentiful torque, it feels every bit as quick.

A first impression, once you shift to drive with the Tesla-style push-button shifter, is that the team has dialed up the throttle response and regenerative braking to aggressive levels. Step even halfway into the accelerator from a standing start, and you'll leap forward energetically, surprising passengers who are new to EVs; floor or aggressively press the right pedal from a standstill and the front tires are likely to break loose as these prototypes don't yet have stability control or ABS—which of course will be enabled in the limited-production Phase One version that arrives next year.

On a short driving loop around San Diego, we found the RAV4 EV Prototype to feel confident, responsive, and planted in both tight low-speed and sweeping higher-speed corners (we only got it up to about 65 mph)—though we didn't have the chance to perform any abrupt maneuvers that would truly put it to the test.

Once you get used to the aggressive regenerative braking—which feels at first like lifting off the accelerator in first or second gear in a manual-transmission car—you won't need to use the regular brakes very much, but the pedal feel is confident and normal. A couple of the most prominent telltale signs that we were in a prototype included a periodic low-frequency buzz of the brake accumulator, and a bright-red emergency shutoff button on the dash, next to the steering wheel.

The suspension was retuned for the EV, the key difference being stiffer springs to handle the extra weight, but otherwise the addition of those heavy batteries to the underside of the RAV4 has some very positive affects, according to chief engineer Sheldon Brown. "One of the advantages is that you get a lower center of gravity," he explained, adding how that, combined with a better weight distribution (just 54 percent to the front wheels), provides a "marginally better-handling vehicle" overall than the V-6 model they started with.

Heavier, but not overweight

In all, the EV weighs 3,942 pounds—nearly 400 pounds heavier than the V-6 RAV4. One issue though is that the weight distribution, in combination with the mammoth torque output from the electric motor, can leave this front-driver scrambling for traction on wet uphills.

Between now and next year, when the RAV4 EV is deployed on a broader, but still low-volume scale, the team will be adding more noise insulation, and optimizing the vehicle's Level 2 (220V) charging system to be as fast as possible. It will also be thoroughly tuning the powertrain for refinement and responsiveness in many ways—some subtle, and others not so subtle.

For instance, road noise and motor whine will be reduced a bit more, and the vehicle will get some level of 'creep'—that's the way automatic-transmission vehicles move gently ahead when you lift off the brake in Drive. Brown says that the RAV4 won't have the level of creep that a Leaf has, but it will have some.

Charging in existing form takes about 28 hours at 110 volts or 12 hours with the Tesla 240-volt connector. Toyota says that range for the RAV4 will be between 80 and 120 miles—widely varying, of course, based on your driving style and use of heating and air conditioning. So far, users have been seeing about 100 miles of range from the vehicle, and its official rated range in the PO-7 cycle is 96 miles.

The production version of the RAV4 EV, which will arrive in spring of 2012, will have a different battery that's tailored to the vehicle (rather than adapted to it as in the demonstration vehicle), yet also designed and built by Tesla. That's about where the similarities will end, though; the RAV4 EV will have a standard J1772 charge connector, and completely different battery parameters compared to the ones used by Tesla. While Toyota wouldn't actually say they'd be more conservative, we're willing to bet on it.

There's one little issue: The regular RAV4, on which the EV is based, is due for a redesign next year. In order to make the RAV4 EV happen in that time frame, too, Toyota for a while will build both body styles at its Ontario plant. From there, the EV has been built with the next-gen vehicle in mind, Brown says, though the initial agreement with Tesla only plans for a few thousand vehicles.

The RAV4 EV is intended to be a learning experience, to be used in the future development of electric vehicles. Toyota is working on an electric version of its iQ city car, which is being developed entirely in-house and will have about a 50-mile range. While Tesla isn't helping for that project, usage and charging patterns from the RAV4 EV will definitely be factored in.

Toyota also confirmed that it is looking into a Tesla mainstay, the induction motor, instead of permanent-magnet motors in its portfolio, because they're not reliant on rare-earth materials.

The concept is deceptively simple. Filter out the EV silence-and-whine, the novel shifter, and the slightly different look, and the EV drives a lot like a regular RAV4. Yet it's a task that the automaker couldn't have pulled off this quickly on its own. And it's a task that is proving Tesla's potential future as a supplier and collaborator for EV powertrains.