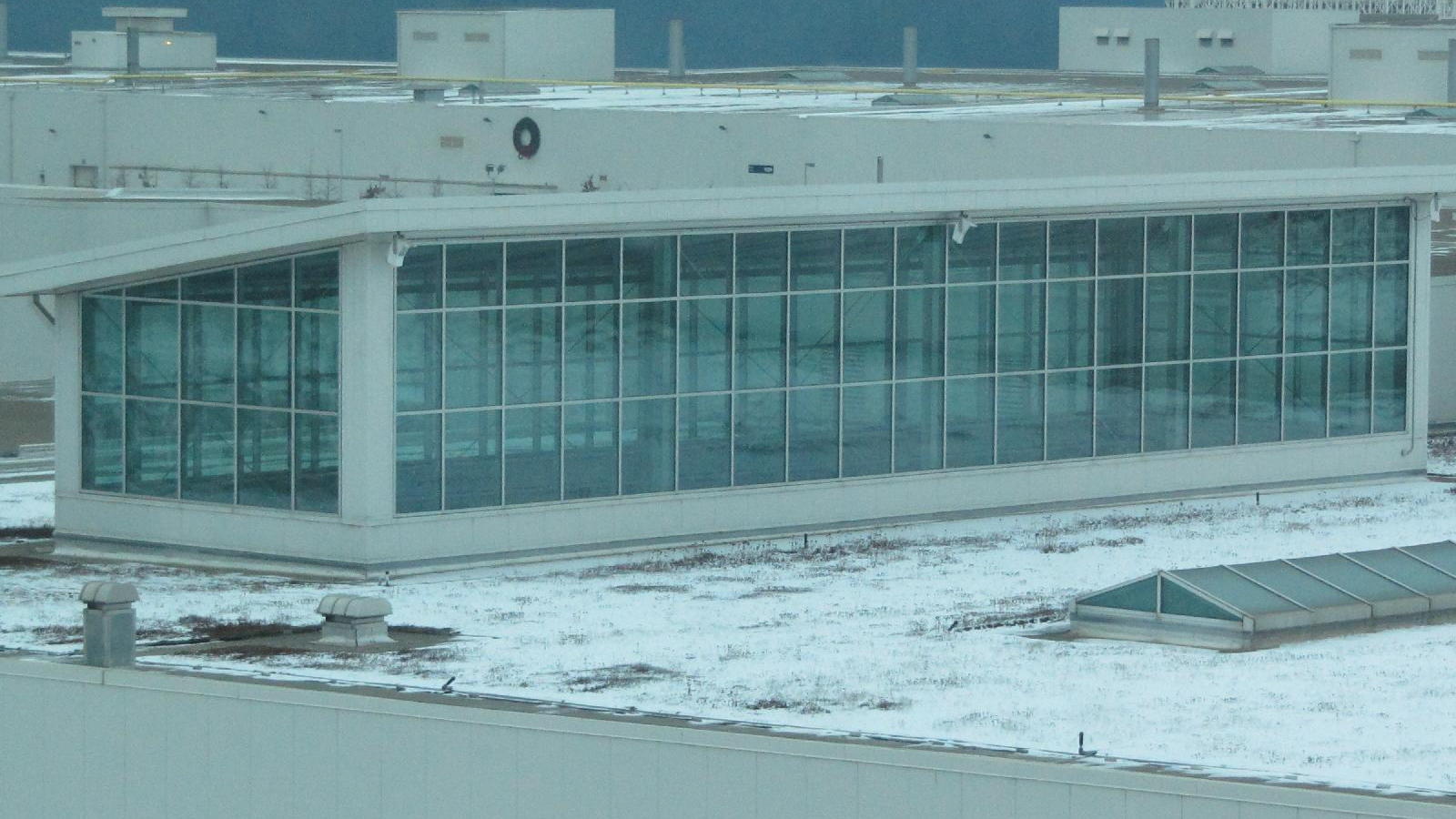 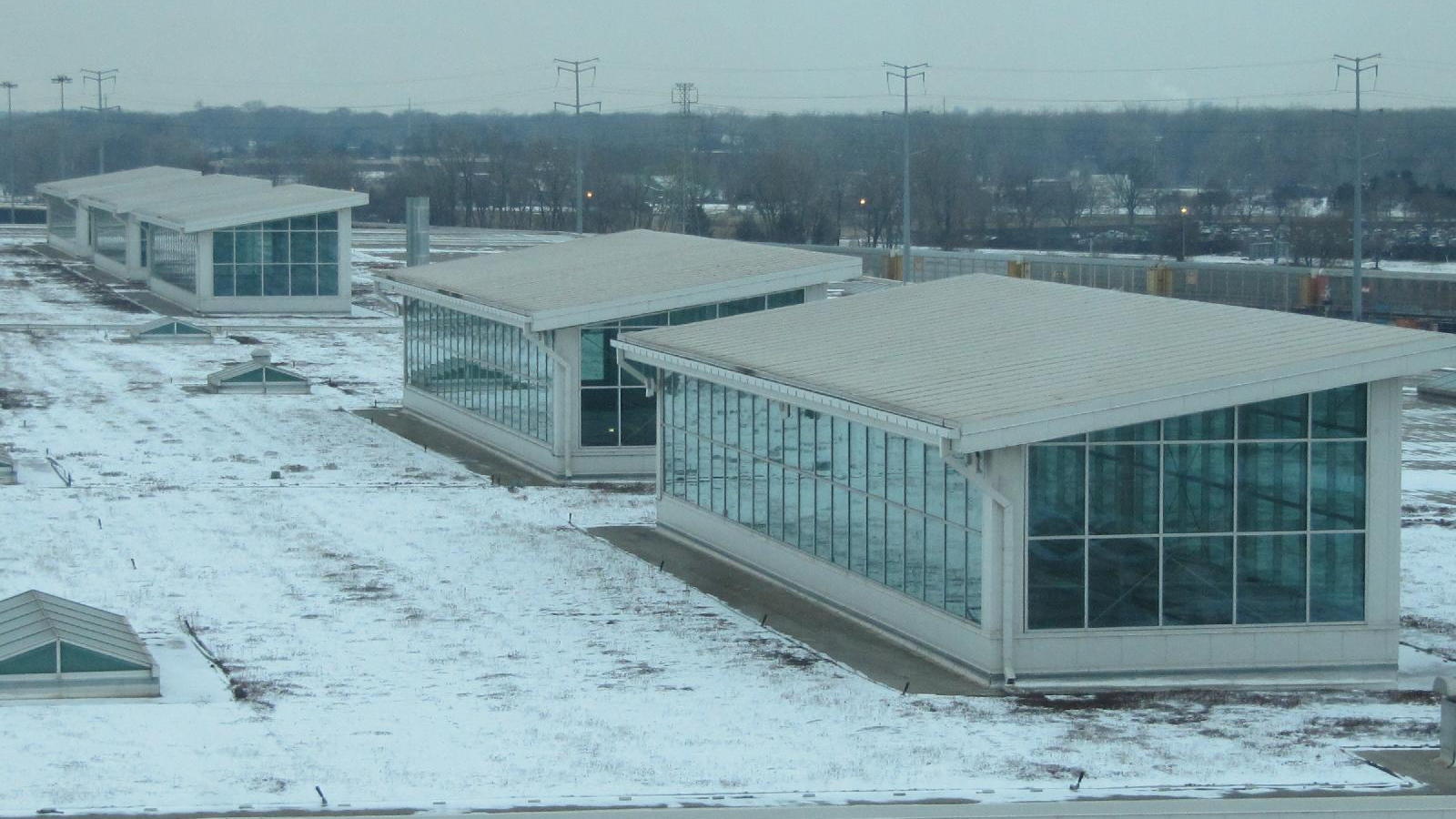 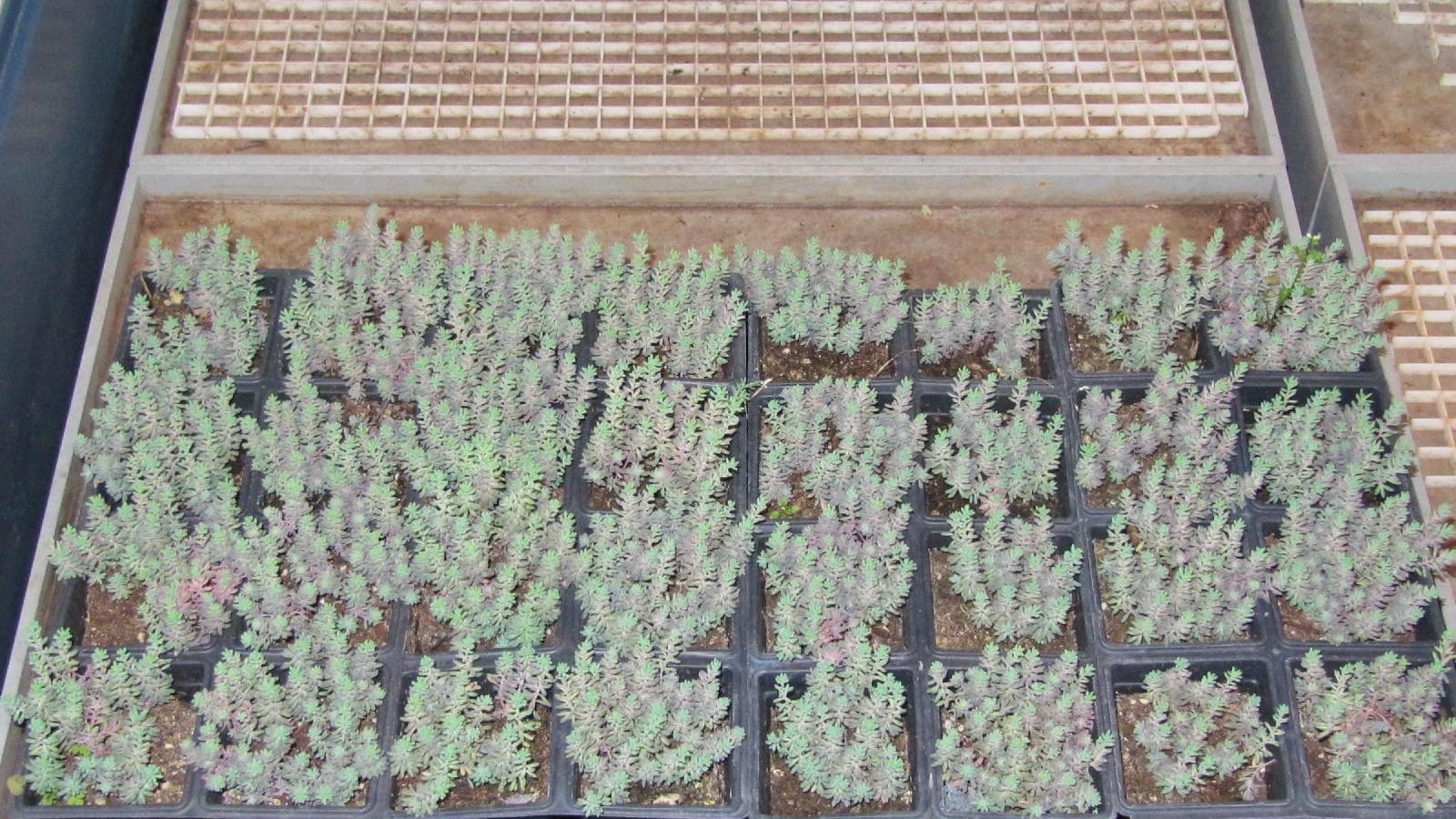 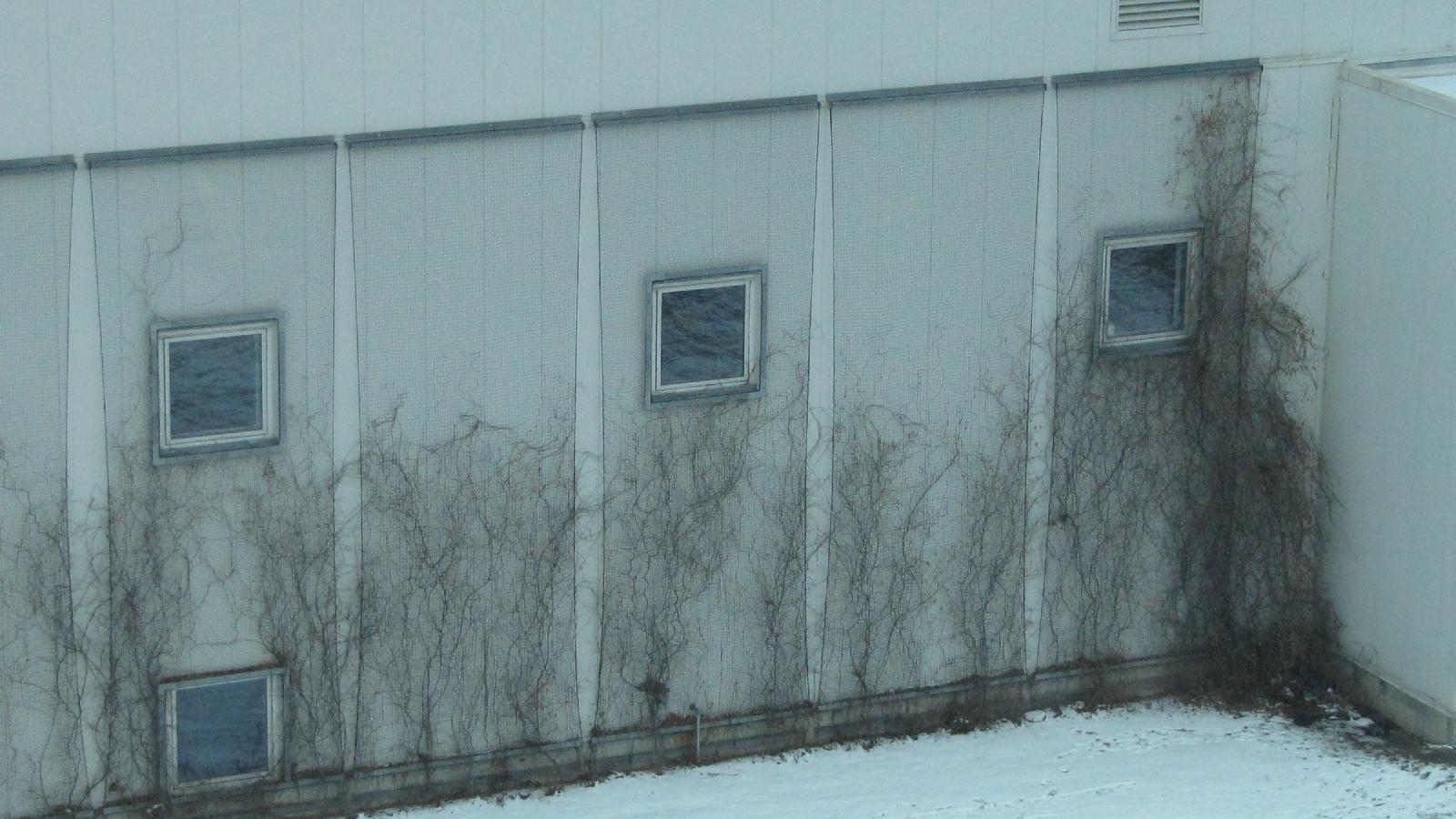 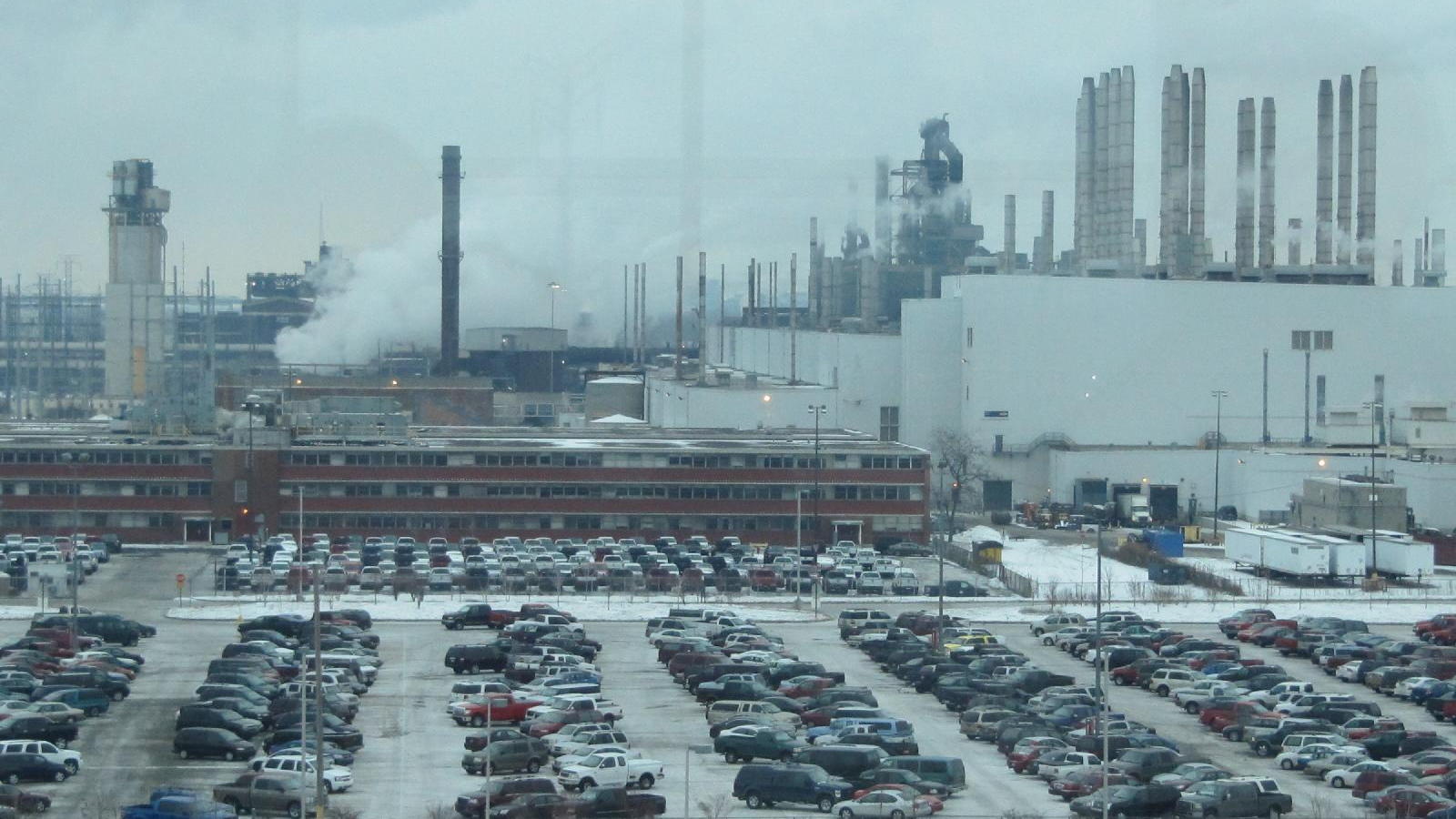 A green roof is not at its most photogenic in a Michigan winter. In fact, it's hardly green at all--more like gray and brown--though it still insulates the building below just as well.

But while some of the green aspects of Ford's showcase Rouge assembly plant have succumbed to the January weather, others operate year-round. A recent tour highlighted aspects of one of the greener car factories in the U.S., whose green features are nearing a decade old and functioning just as planned.

The vines that insulate the metal sides of the assembly hall are no more than withered stalks, and they'll have to be replanted this spring. But the 10.4 acres of green roof above still absorb melting snow and keep the factory underneath at a constant temperature.

The lightboxes that stand proud of the roof continue providing daylight to the workers below, reducing energy costs and also modulating the artificial light of fluorescent tubes with natural light.

What looks like a standard-issue parking lot is actually paved in porous asphalt, which lets rainwater pass through holes into the ground beneath rather than draining into sewers or running off into the river. It's not durable enough for continuous traffic, but maintenance is limited to vacuuming dust out of the holes twice a year.

(One oddity of Detroit auto culture remains entrenched, though. Drivers of Ford products can park near the plant entrances; all others are segregated and required to park at the most distant end of the lot, behind a green line drawn to separate Ford vehicles from the infidels.)

There's even a small green park-like space planted with trees on the Rouge grounds. It houses birds, rabbits, squirrels, and hives containing 50,000 bees. A plant worker who's also a beekeeper oversees the hives, in exchange for which he gets to keep all the honey the produce.

Birds also alight and feed on the green roofs, which are covered with a tough, durable, low-to-the-ground plant called sedum.

The green roof, parking lot, and even reused water in the bathrooms together let Ford avoid building a separate wastewater treatment plant. The total cost was less than 40 percent of the price that would have been needed to build the treatment facility.

At the behest of then-chairman of the board Bill Ford, the Dearborn Assembly plant at the company's historic Rouge facility was rebuilt in 2000 as a green showpiece under the direction of architect William McDonough.

The goal was to demonstrate that even the most industrial of facilities, covering 1.1 million square feet, could embody environmentally thoughtful design and conserve energy. A commitment to global sustainability and best practices in its factories is a part of the company's One Ford management practice.

Overall, Ford has reduced its global energy use 30 percent since 2000, and cut its emissions of carbon dioxide (CO2) by 39 percent, said Volker Eis, the company's manager of sustainability communications for Ford of Europe.

Beyond the Rouge, many of Ford's green facilities are located in Europe, where the public and elected officials are far more focused on reducing emissions of greenhouse gases and the cost of energy is higher.

Its Dagenham diesel plant in the U.K., for instance, generates all its own power via onsite wind turbines. Its plant in Genk, Belgium, uses wind turbines to generate some of its power, and the Bridgend, U.K., engine plant uses solar panels for the same purpose.

Solar panels are also used to generate a small percentage of the power at Ford's Wayne Assembly facility, now building the 2012 Ford Focus compact. The Ford Focus Electric version will also be built there, as will C-Max gasoline, hybrid, and plug-in hybrid models as well.

Henry Ford deliberately placed his plants near sources of water transport, and that mode remains in use today. Every one of the Ford Fiestas built in Cologne, Germany, for instance, leaves the plant on barges that carry them along the Rhine to the North Sea, eliminating the uses of trucks entirely for new-car transport.

Similarly, at the Rouge, completed Ford F-150 pickup trucks are mostly shipped out of the plant by rail or on ships, reducing the energy required to transport them. Only for deliveries within Michigan and nearby points do the new pickups leave the factory on transporter trailers.

Ford is no longer responsible for the on-site steel plant, however, which was sold to Russian company Severstal in 2001.

At its height, the Rouge plant--named for the River Rouge it sits alongside, so called by early French explorers because of its red color--may have been the most important and most studied mass production facility in the world. When completed in 1928, it was certainly the largest.

Opened in 1917, the Rouge exemplified Henry Ford's vertical integration, in which--almost literally--iron ore went in one end, and completed Model T Fords drove out the other end. It generated its own energy, and had its own docks for bringing in raw materials and shipping out finished cars.

At its zenith in the 1930s, the Rouge plant included about 90 buildings that covered 1,100 acres and enclosed 16 million square feet of factory floor space. At peak production, running three shifts of workers, a staggering 100,000 employees passed through the Rouge every day.

Visitors came from all over to marvel at the carefully engineered tasks assigned to each worker, the flow of parts and materials, and the completely self-contained nature of the plant.

Today, the Rouge employs only two shifts of 1,000 workers apiece, who build 60 Ford F-150 pickup trucks an hour, one per minute.

It was also the site of the notorious 1937 Battle of the Overpass, in which thugs hired by Henry Ford's enforcer, Harry Bennett, assaulted union organizers and beat them bloody.

Photos of the event, taken by a Detroit News photographer on the scene, helped turn the tide of public opinion and ultimately led Ford to recognize the United Auto Workers in 1940. They also led to a Pulitzer Prize for news photography, which endures today.