The 2011 Nissan Leaf, at first glance, looks a whole lot simpler to service than conventional gasoline cars; there's no flammable liquid in the tank, no motor oil, no complicated multi-speed transmission either.

Wouldn't there be some expensive equipment required in the transition? A lot more training required?

Turns out it's really not much in the cost of a dealership operation; the total cost of the dealership upgrades Nissan is requesting doesn't add up to much more than the price of a single Leaf.

According to Mark Perry, Nissan's director of product planning and strategy, and the hands-on executive who's seen the Leaf project through in the U.S., dealerships become certified to sell and service the Leaf if they comply on three main points:

Just like home charger installation, the total cost to the dealership could vary quite a bit, estimated Perry, though he said we're certainly not talking hundreds of thousands. The total cost for most dealerships would to equip themselves for Leaf will fall in the vicinity of $25,000 to $75,000, he estimated. Or in the same order of magnitude as the cost of one new 2011 Leaf (base price $32,780). 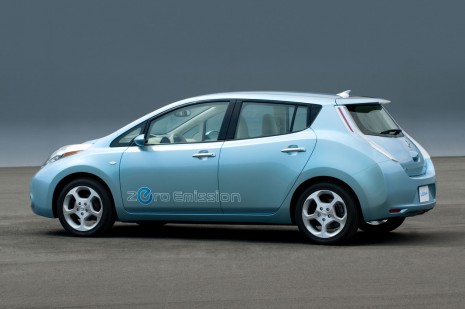 So, tools and equipment, technician training, sales training, public charging stations, those are the things we're asking our dealerships across the country to be able to do," outlined Perry. "It's a bit of an investment, but it's an investment in the future."

Nissan is currently launching the Leaf in seven states (with first deliveries taking place this week), but the company hopes to have techs for nearly all of its dealerships trained and ready well before the Leaf is available in all 50 states about a year from now.

Perry says that so far, nearly every store—about 97 percent of dealerships—has agreed to take on the added training and upgrades to sell Leaf. "You always have one or two that maybe don't, and that's okay, but we're very excited that the dealers see this is the future, and we're just taking the first step."