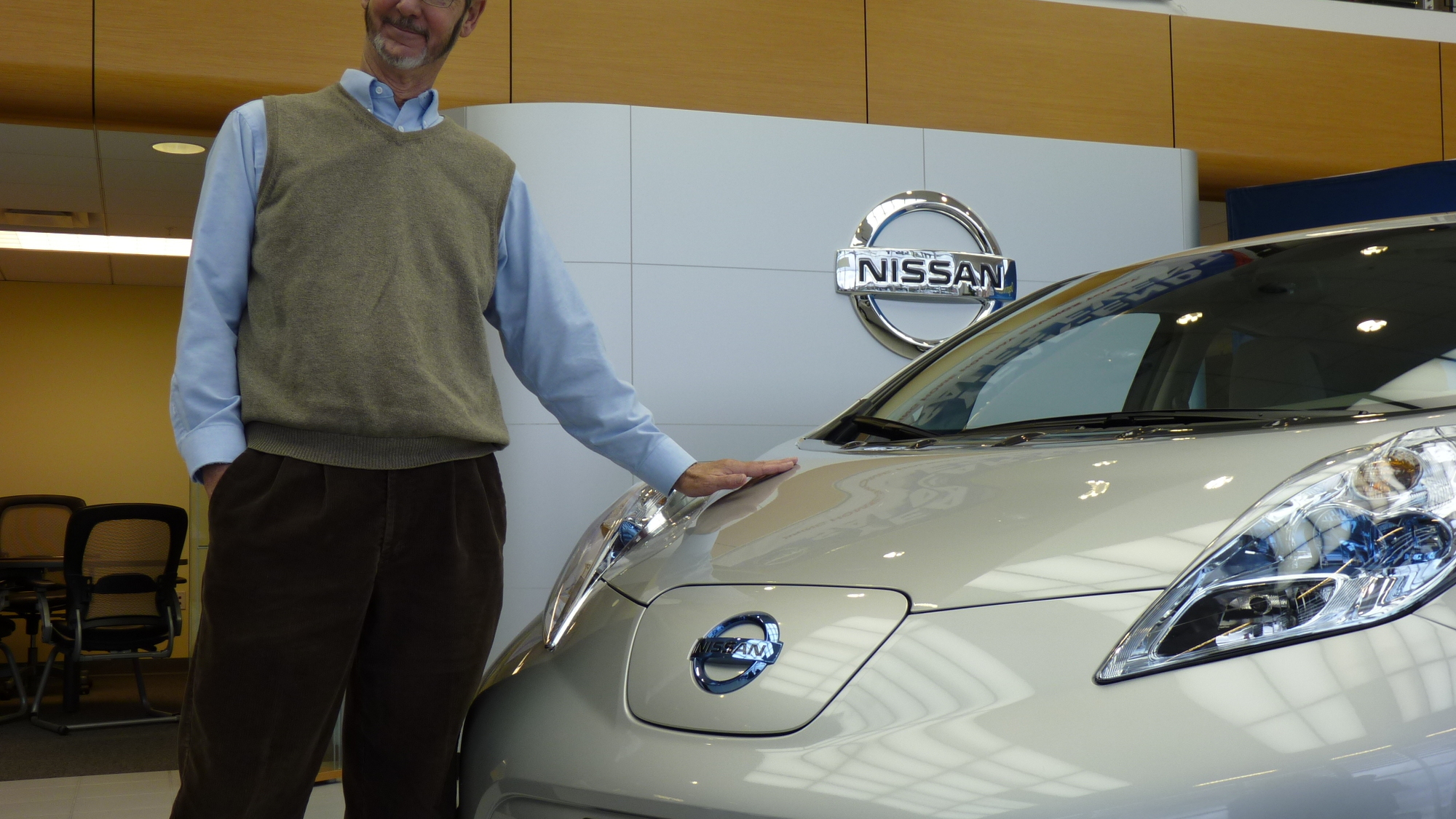 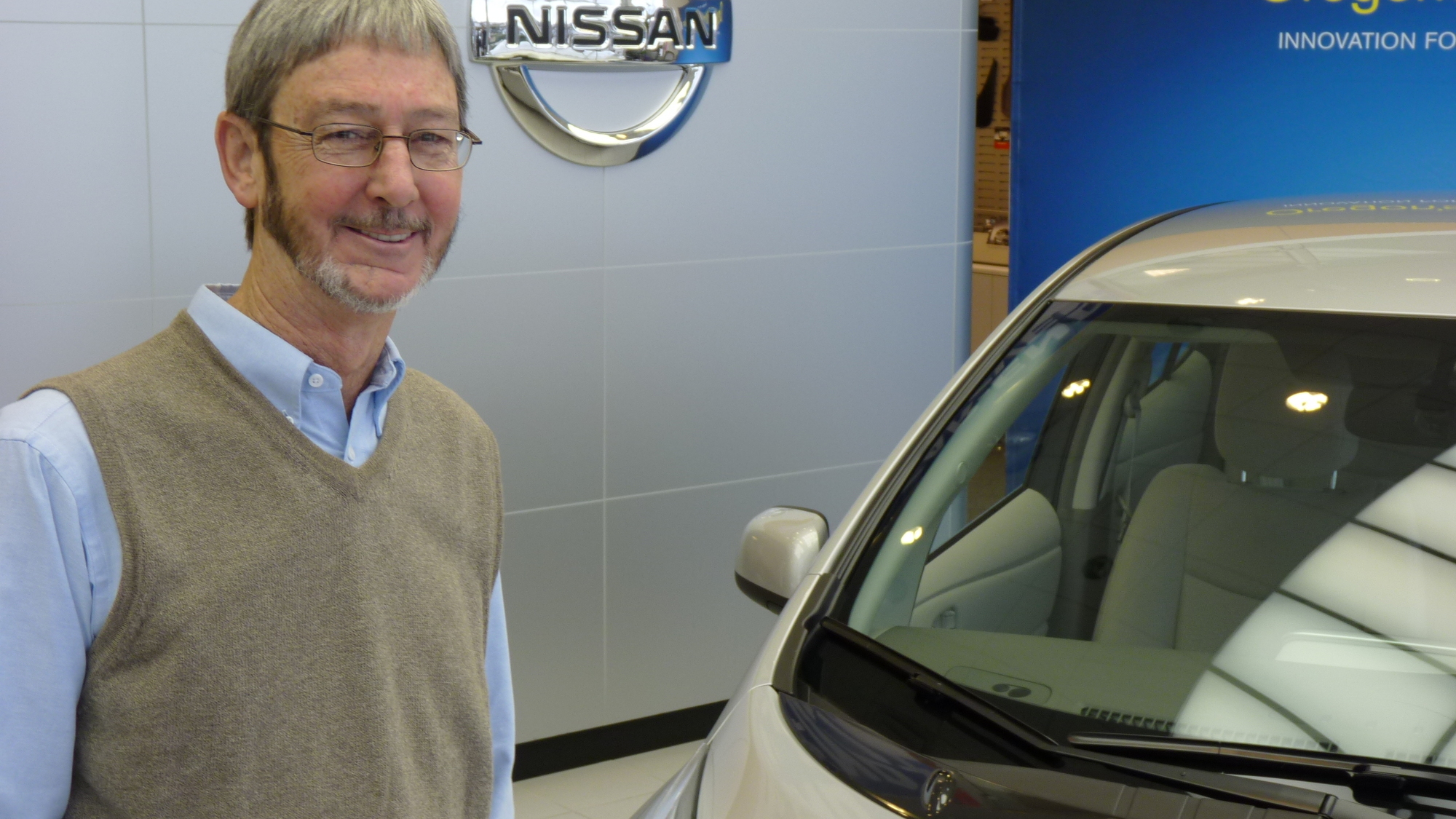 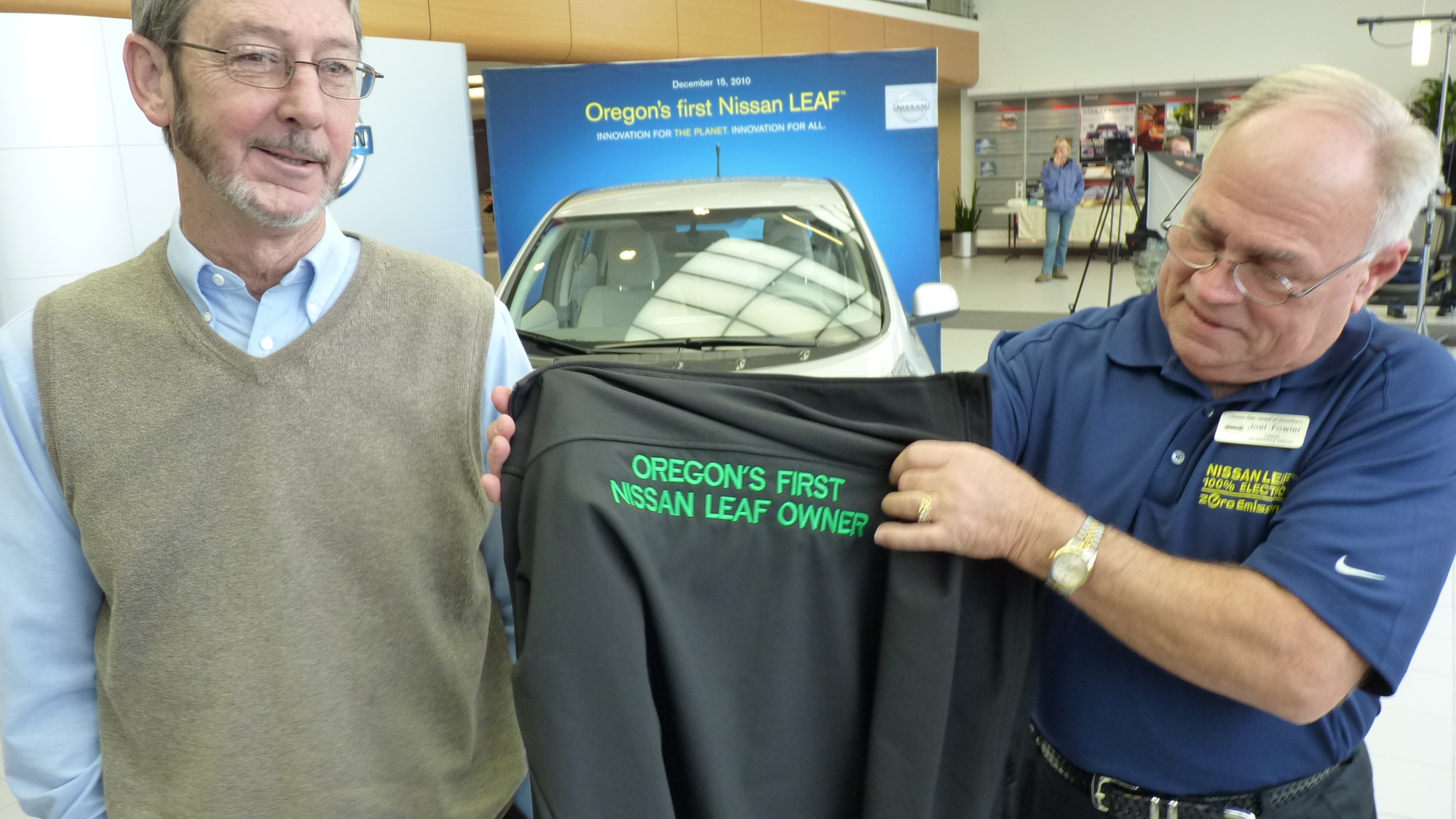 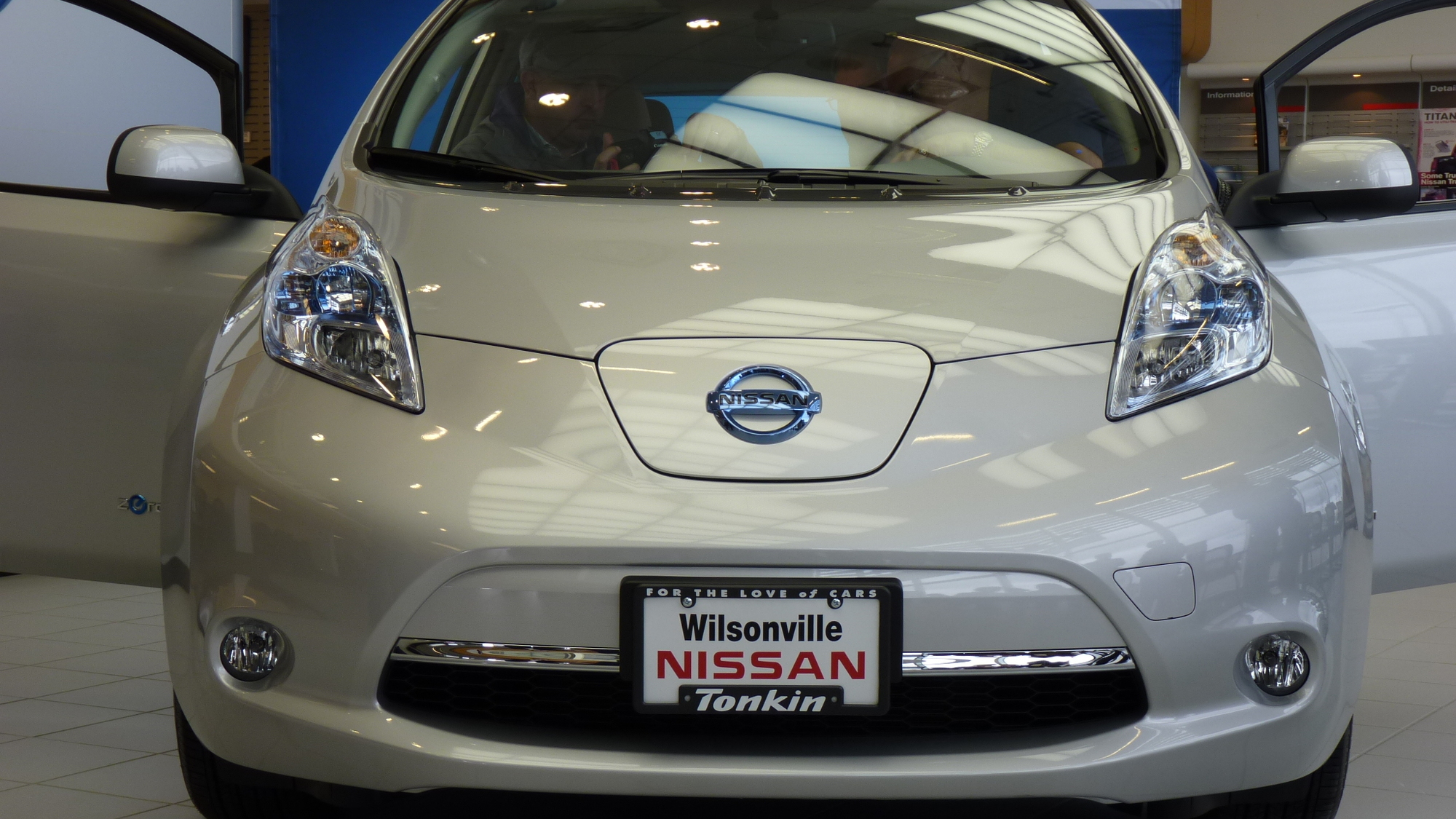 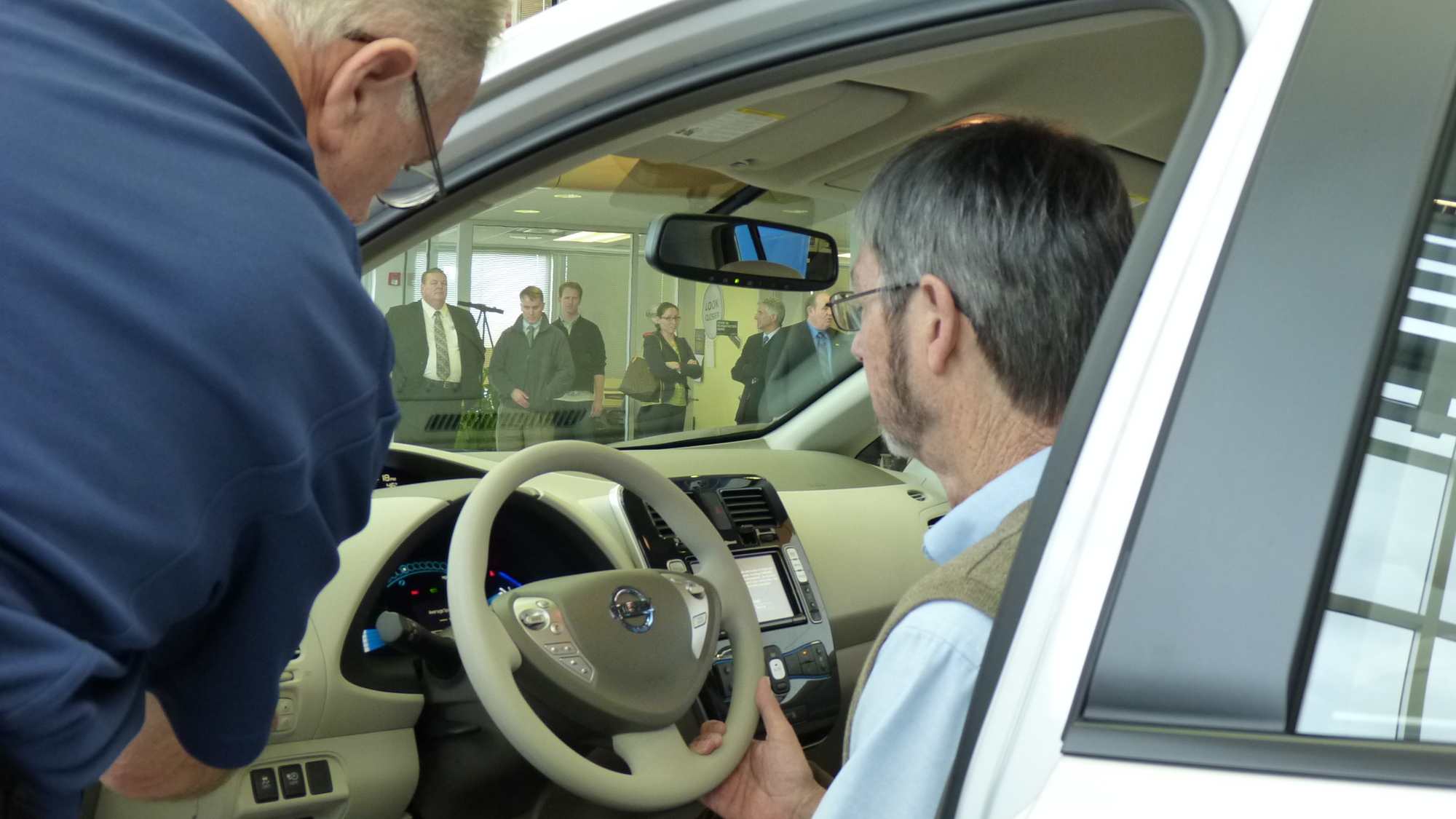 13
photos
The 2011 Nissan Leaf electric car is now officially on sale. Over the past several days—beginning with the first delivery in San Francisco we covered this past weekend—Nissan has begun making actual deliveries of the Leaf. Not just to company fleets, public utilities, or those in transportation think-tanks, but to actual consumers.

One of these—the fourth nationally, and the first to take delivery in Oregon (Portland being one of the Leaf's key initial markets)--is John Duncan, who was presented his car by Mark Perry, Nissan's director for product planning, and his keys by Joel Fowler of Tonkin Nissan, in Wilsonville, Oregon, outside Portland.

One key difference we've already noticed among those interested in the Nissan Leaf versus those thinking about the Chevrolet Volt is a level of early adopter zeal—an EV evangelism of sorts—and Duncan has it.

Is this fervor familiar?

Coincidentally, it's sounding somewhat like the sort of enthusiastic fervor that Saturn owners developed (and, coincidentally, the Leaf will be built in Smyrna, Tennessee, about 40 miles from Saturn's Spring Hill home). The last car Duncan, a part-time college instructor, bought was a basic 1997 Saturn SL1 sedan, and in 2000, after becoming interested in EVs for a number of years—perhaps prompted in part by the EV1—he promised himself that his next car would be an EV.

Luckily, Duncan's SL1 made it; it's held up so well over the years that he's going to pass it along to his son as he starts to drive the Leaf.

Duncan commutes 22 miles round-trip each teaching day to a nearby campus. On other days he goes from his suburban Portland home, near the dealership, into downtown Portland—nearly 50 miles round-trip. "I would almost never go more than 50 or 60 miles. Seventy at the most on a very heavy driving day."

"One of the nice things about the electric car of course is that when you get stuck in Friday-evening 4:45 traffic and you're at a standstill, you're not using any gas," said Duncan. "It's a really good commuter car. And I feel very good about the fact that my carbon footprint's down...it's a socially and politically responsible thing to do."

"It's a good thing for the community," said Duncan. "And I'm going to let any of my friends who wants to, to drive it."

The other car in Duncan's household is his wife's Toyota RAV4, which they need because she's a ski instructor and they'll use for longer trips.

Volt vs Prius Plug-In vs Leaf

It wasn't a no-brainer, says Duncan, who drove the Leaf and got a tour in Hillsboro, Oregon a number of months ago. He says he certainly did think about the 2011 Chevrolet Volt. "I looked at it, and I thought about it. It just didn't make sense to me."

With a base price of $32,780 for the Leaf versus $41,000 for the Volt—and that's before the $7,500 federal tax credit and any additional state incentives—the Leaf also costs considerably less.

Ultimately, Duncan says that carpool-lane privileges were very important, and when California decided not to allow the Volt that was a significant factor. So was carrying around gasoline and an engine.

He also thought about a Prius or Prius plug-in, but that, Duncan said, seemed like "going to the swimming pool and just putting your feet in...not diving into the water and going swimming."

And before you say the deck is loaded: Like the other first-round Leaf recipients, Duncan is paying full price for his Leaf and was chosen simply because he was one of the first to reserve, quick to respond to Nissan, and willing to make his delivery a public appearance.

"If I had to haul a lot of kids around to soccer practice like I did when I was younger, it might be a different story," he confesses, referring to those other cars. "But right now, this is exactly the right kind of car for me. And I think it is for a lot of people."