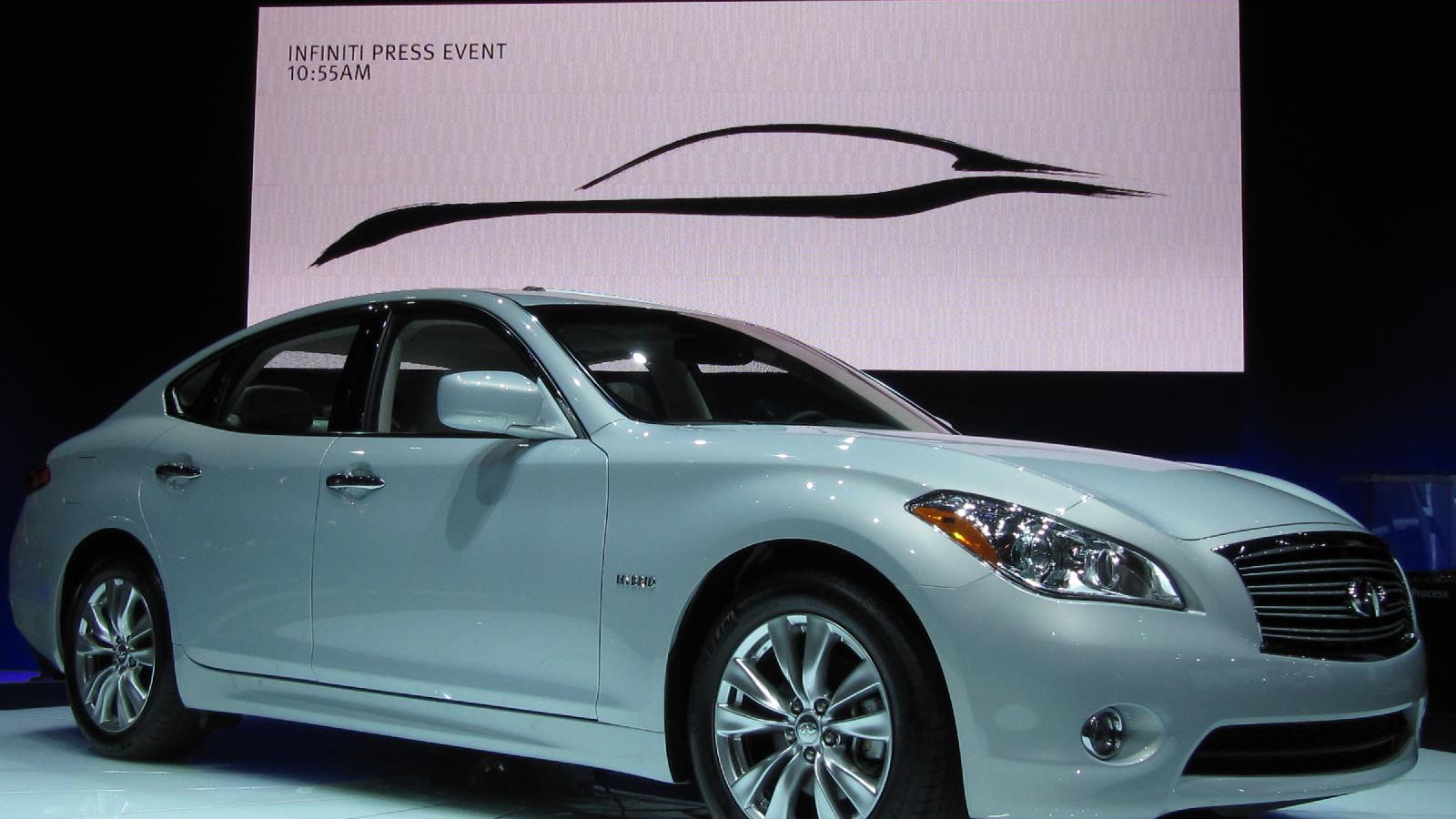 First previewed at last year's Pebble Beach Concours d'Elegance, we've been hearing about the 2012 Infiniti M Hybrid for more than a year.

It's the first of a number of vehicles from Infiniti (and perhaps Nissan as well) to use the new Direct Response Hybrid system, first previewed in the Infiniti Essence concept introduced at the 2009 Geneva Motor Show.

The M35h offers electric-only running for a mile or more (Infiniti says 1.2 miles) at speeds up to 62 mph. In mixed use, the company says, its tests show the M35h operating solely on electric power as much as 50 percent of the time. 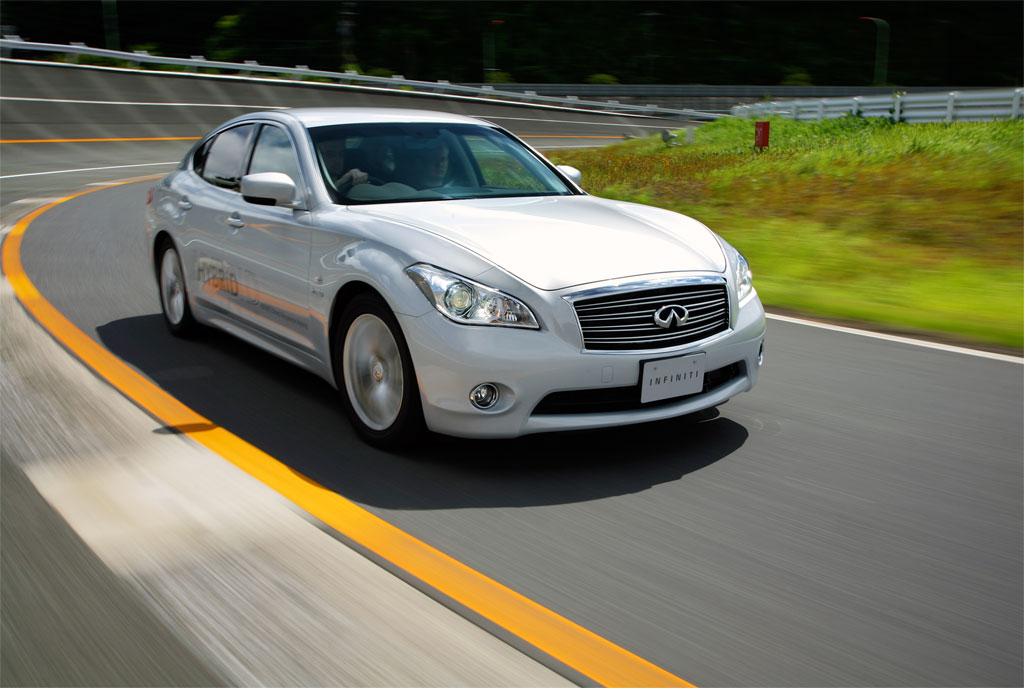 But this is hardly some mild-mannered hybrid compact. Infiniti proudly trumpets that it's the world's sole hybrid (at the moment) with both an expected EPA rating of 30 miles per gallon on the highway and more than 350 horsepower. It provides, the company claims, "the power of a V-8 with the fuel efficiency of a four-cylinder engine."

Infiniti expects the combined EPA rating for the 2012 M Hybrid to be 27 mpg, or best in its midsize luxury sedan class. 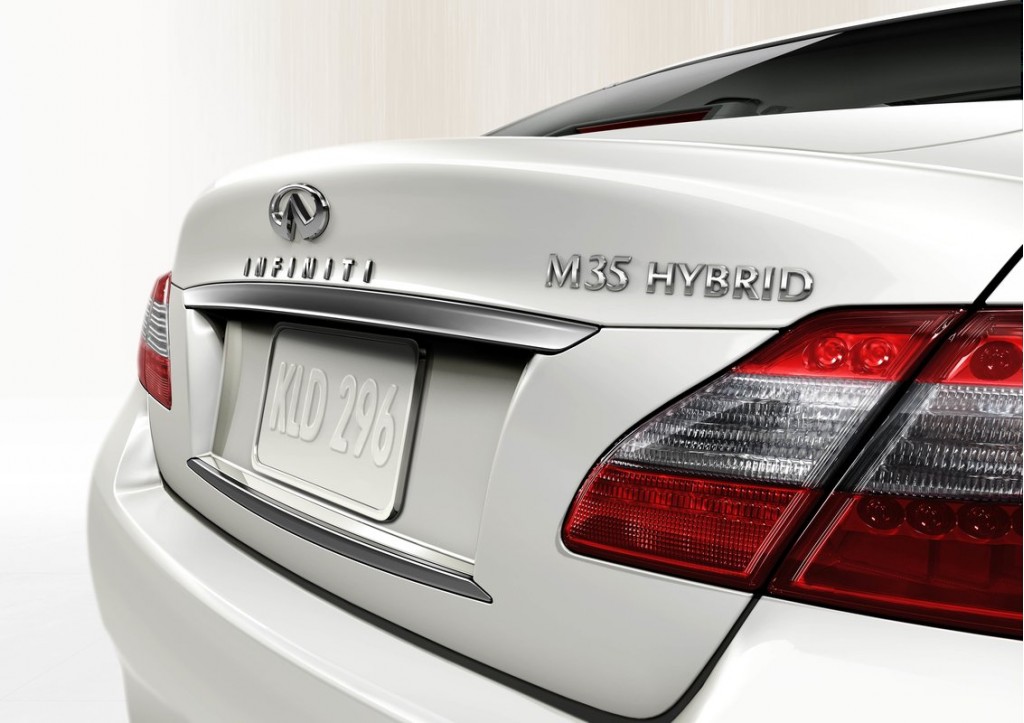 The battery pack powers a 50-kilowatt (67-hp) electric motor mounted between the 302-hp, 3.5-liter V-6 engine and Infiniti's new 7-speed automatic transmission, adapted with an oil pump replacing the torque converter so the transmission continues to work with the engine off.

Peak torque from the electric motor is 199 foot-pounds, or fully 80 percent of the gasoline engine's 258 lb-ft.

With a clutch on either side of the motor, the V-6 engine can be fully decoupled when the car is being powered electrically or in regenerative mode. With both clutches engaged, the motor is locked to the engine and the transmission for straight-through drive by the gasoline engine.

Like all such single-motor hybrid systems, the electric motor can either power the car (alone or supplementing engine torque) or recharge the battery under regenerative braking, but it cannot do both at the same time. The two-motor systems used by such makers as Toyota and Ford are able to do both simultaneously. 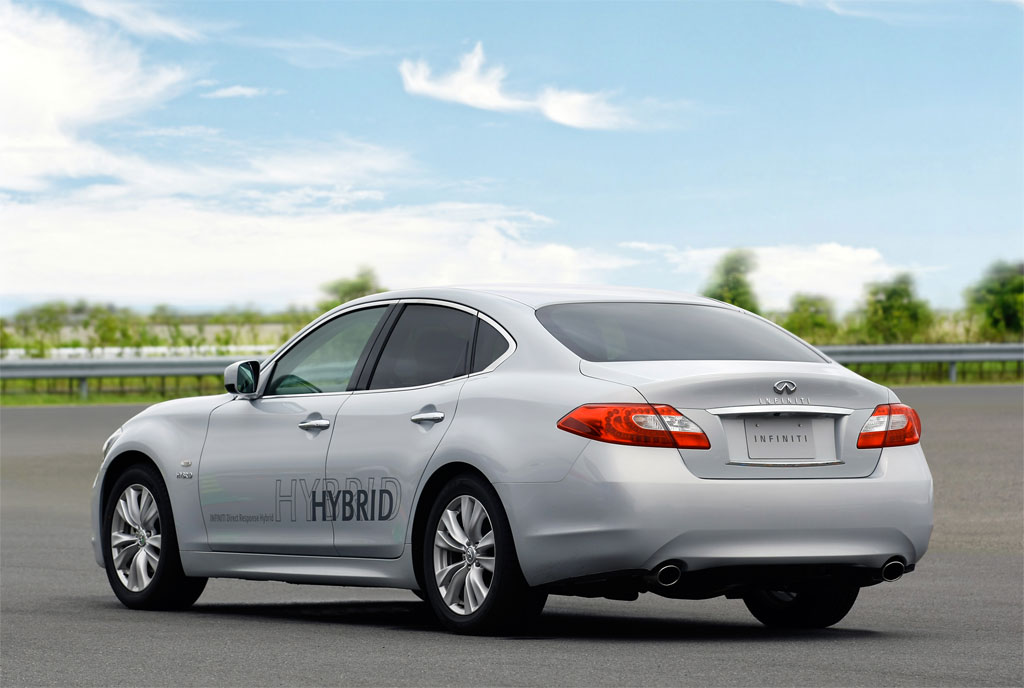 The M Hybrid is also the first to use a new hybrid electric power steering system, which provides assist only when the wheel is turned from the center position. Infiniti says the steering system alone reduces fuel consumption by roughly 2 percent; expect to see it on future models, perhaps including non-hybrids.

The 2012 Infiniti M35h hybrid is only available with rear-wheel-drive; the all-wheel-drive option offered on other Infiniti M models is not offered with the hybrid. At 4,129 pounds, its weight gain over the gasoline M37 model is a comparatively modest 276 pounds.

It will go on sale nationwide during spring 2011.

The video below shows our social-media maven Joel Feder (who also edits the SocialCarNews.com site) interviewing Kyle Bazemore, Infiniti marketing manager, on the M Hybrid and the company's plans for marketing it.