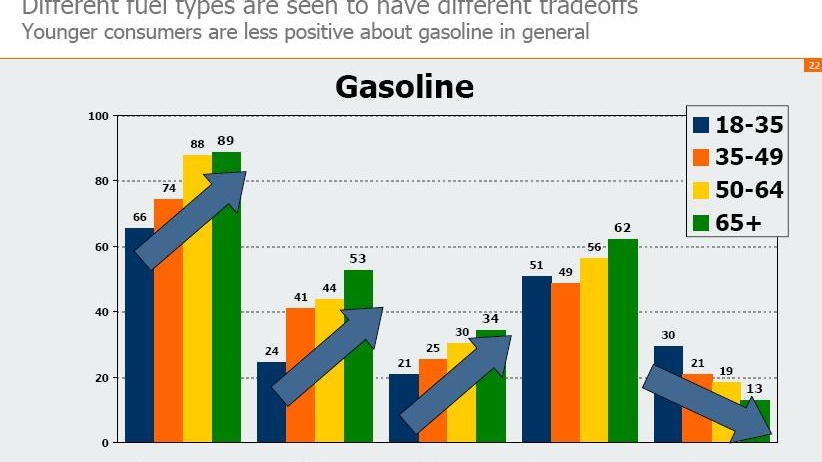 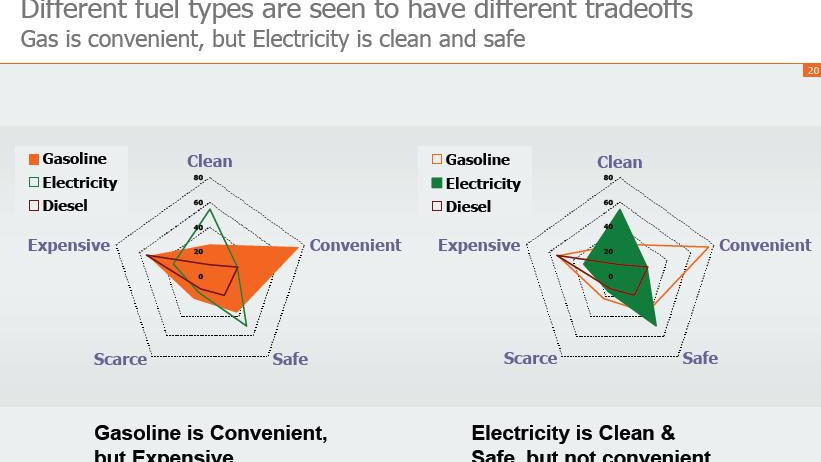 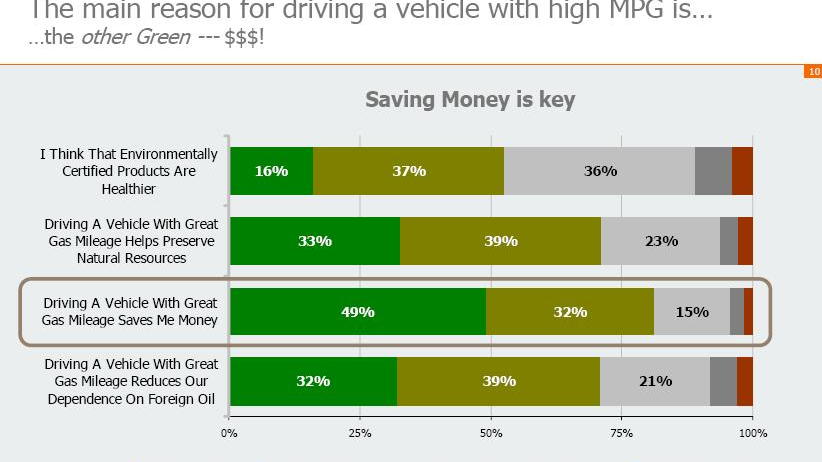 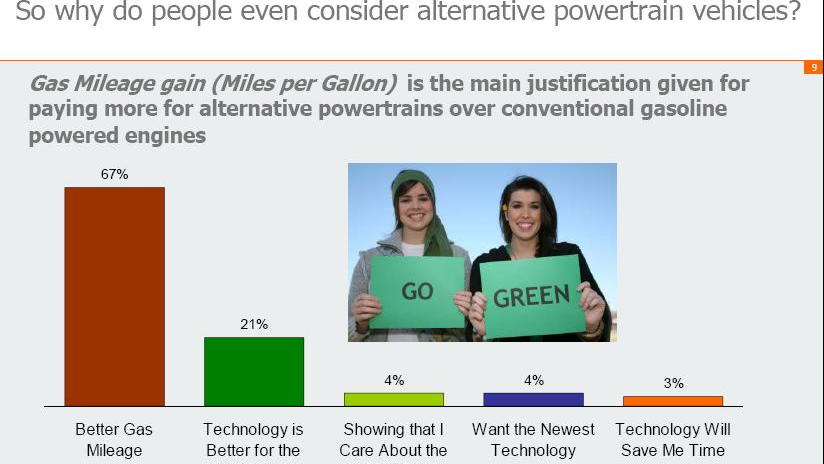 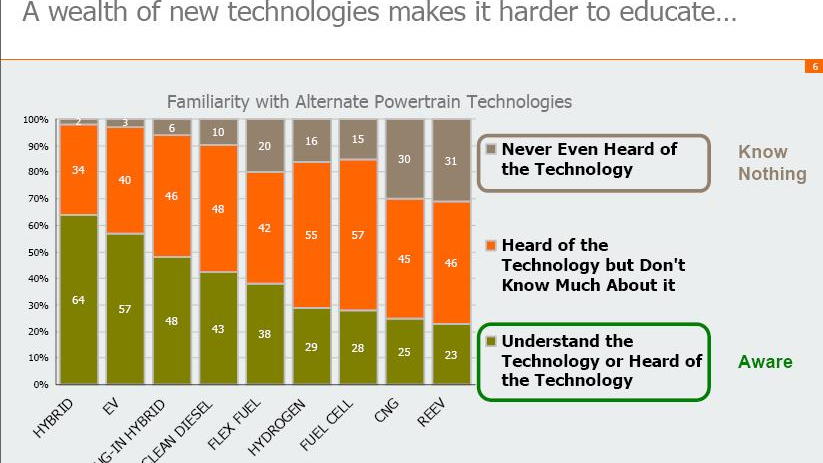 If you're reading this site, there's a good chance that you're interested in driving green: saving fuel, perhaps reducing the overall impact of your transportation choices on the planet.

Or maybe not. Maybe, like the vast majority of U.S. buyers, you're interested in better fuel economy not for green reasons, but because it saves you money.

That's the motivation for most consumers when they look at fuel-efficient vehicles, according to a new survey from GfK Research entitled "Selling Green in Today's Market."

Lots of options, most confusing

Don DeVeaux, a managing partner at the market research firm, discussed the results of an online survey of consumers intending to buy cars, and their varying motivations for selecting particular types--in particular, cars with alternative powertrains.

Hybrids were the most familiar, benefiting from a decade on sale and a clearly defined set of attributes (mostly good gas mileage).

But other alternative-fuel vehicles suffered not only from an awareness deficit, but also negative imagery associated with specific fuel types. Diesel, for example, was viewed as dirty, expensive, and inconvenient.

The picture can only get more complicated as smaller, more efficient engines make all cars more fuel efficient. Already, about half the cars with gas mileage over 30 mpg are not hybrids, but standard gasoline cars. 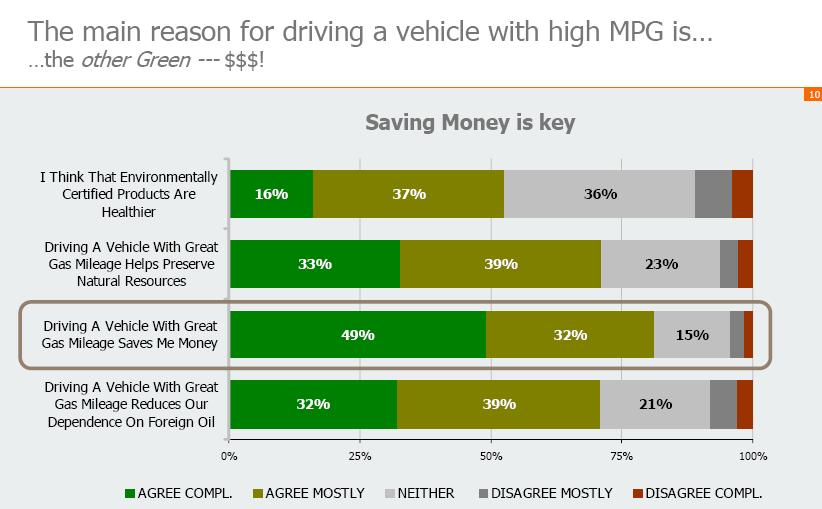 The key question in the survey may have been, "If the technology you selected required additional extra cost, how would you justify the investment?"

Fully two-thirds of respondents (67%) chose "better gas mileage"--far ahead of any of the other options. Those included "technology is better for the environment" (21%).

All other options scored in low single digits, including "showing that I care about the environment," along with "want the newest technology" and "technology will save me time."

Further questions reinforced the message: The main reason for buying a car with higher miles-per-gallon had nothing to do with greenhouse gases, natural resources, or dependence on foreign oil.

It was, simply, "Driving a vehicle with great gas mileage saves me money."

Consumers admitted that in tough economic times, the environment took a back seat to their wallets. And while the environment is an intangible and hard to assess, dollars and cents are about as tangible a measure as you can get.

Out of those intending to buy a new car, only one in four fall into groups that GfK defined as "deeply green." The others fell into categories ranging from those who intend to be green but do nothing about it to those who are actively hostile to green causes.

When ranking vehicle attributes, convenience and cost are several of the top reasons for choosing or rejecting a new technology. In other words, if it doesn't save money and require little or no change to car buyers' routines, most won't consider it.

Is that a harbinger of doom for electric cars, which require plugging in to recharge? Not necessarily. Ranked on five different qualities, gasoline is seen as convenient but pricey, while electricity is viewed as clean and safe, but inconvenient.

Younger buyers, however, were more negative about gasoline, viewing it as less safe, less clean, and less convenient than older buyers--as well as a scarcer resource. In contrast, electricity is viewed about the same by all cohorts.

Over time, as the first electric cars begin to filter into neighborhoods, their owners may find that plugging in becomes second nature--and that word will spread to their neighbors. And their neighbors' teenage kids.